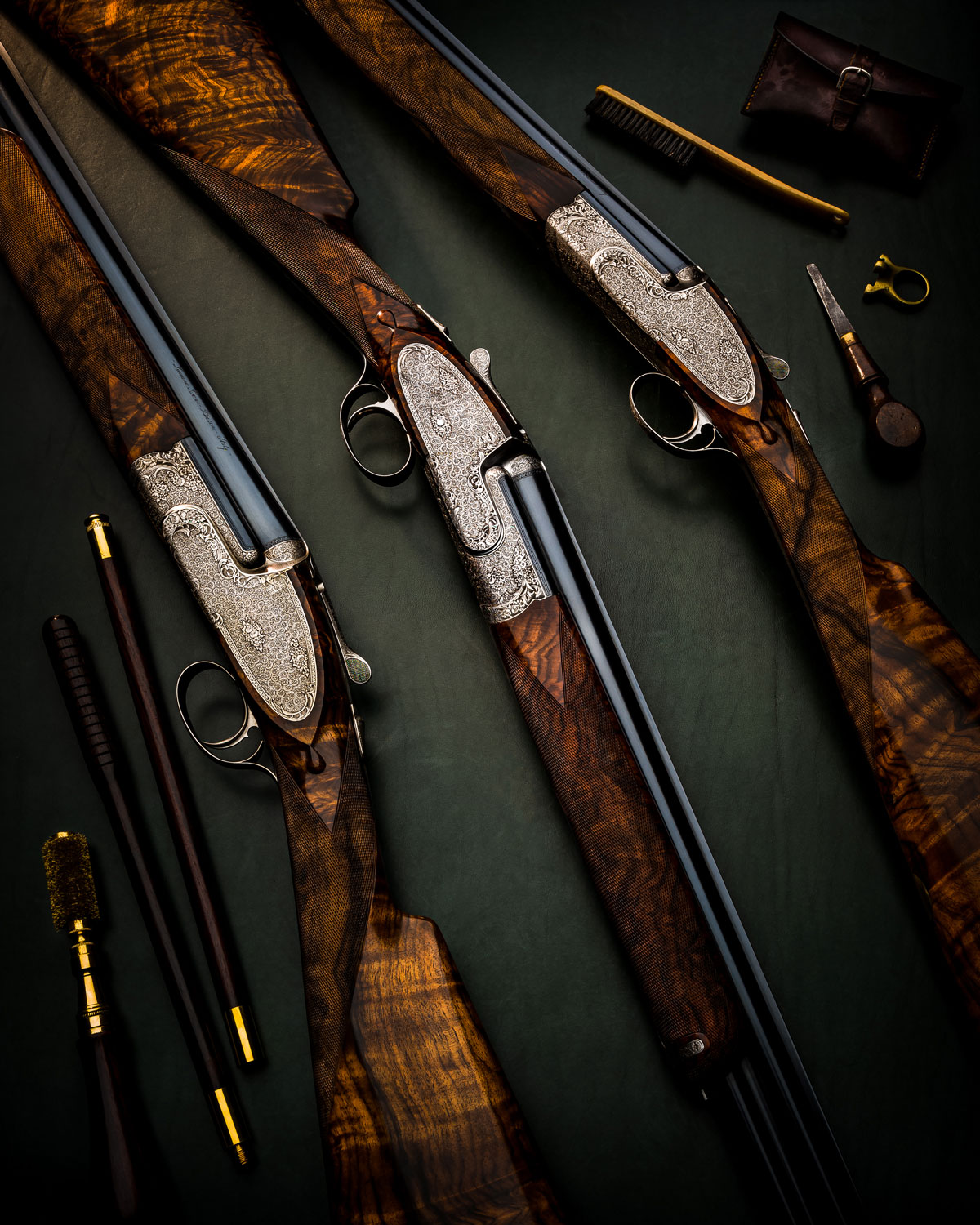 Three stunning pre-owned Bosis Michelangelo Over/Under shotguns are going up for sale in our Birmingham gunroom. Easily one of the finest handmade over/under shotguns produced today, guns made by Luciano Bosis are renowned for their shape, handling characteristics, superb fit and finish, their stunning stock blanks and, of course, their wonderful engraving. Just as one would expect, each gun in this composed trio, a 12g, 20g and 28g, is superb in all respects. 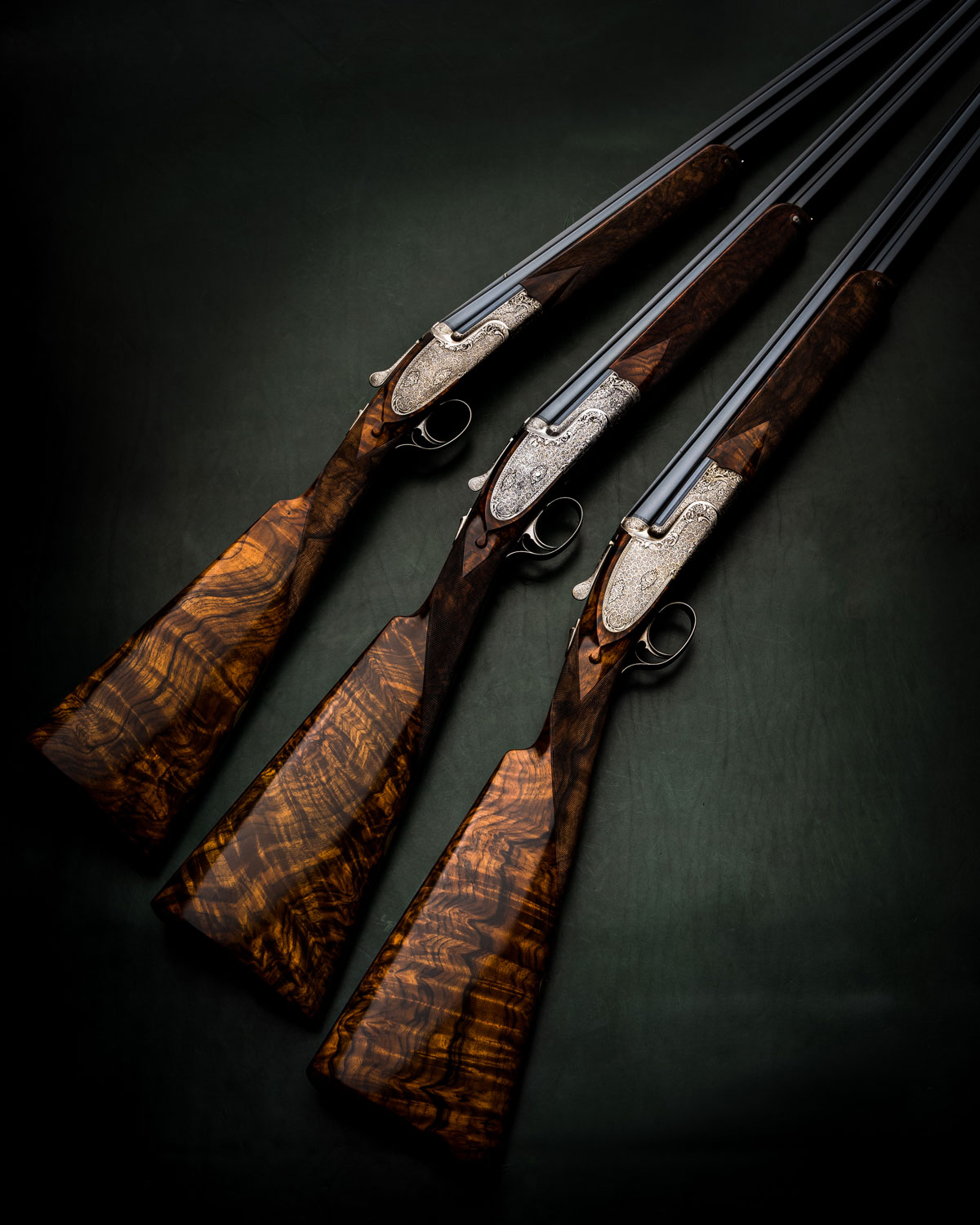 According to the Bosis website, after an apprenticeship at Galesi Arms and a few years working for Perazzi, Mr. Bosis set up his own shop in 1977 in a farmhouse in the village of Travagliato, just outside of Brescia. Starting the gunmaking business with funds raised from selling and repairing other guns, Mr. Bosis first made a side by side but by 1980 had produced his own over/under. Mr. Frank Pachmayr who is famous for originating the modern rubber butt pad and recognized as one of America’s greatest gunsmiths, was also an early proponent and importer of Italian made shotguns. The story goes that after Mr. Pachmayr saw the Bosis O/U at the IWA International Hunting and Shooting fair in Nuremberg, Germany he bought one for himself and placed and order for ten more. Today, Mr. Bosis has a loyal following in the U.S. and Worldwide. 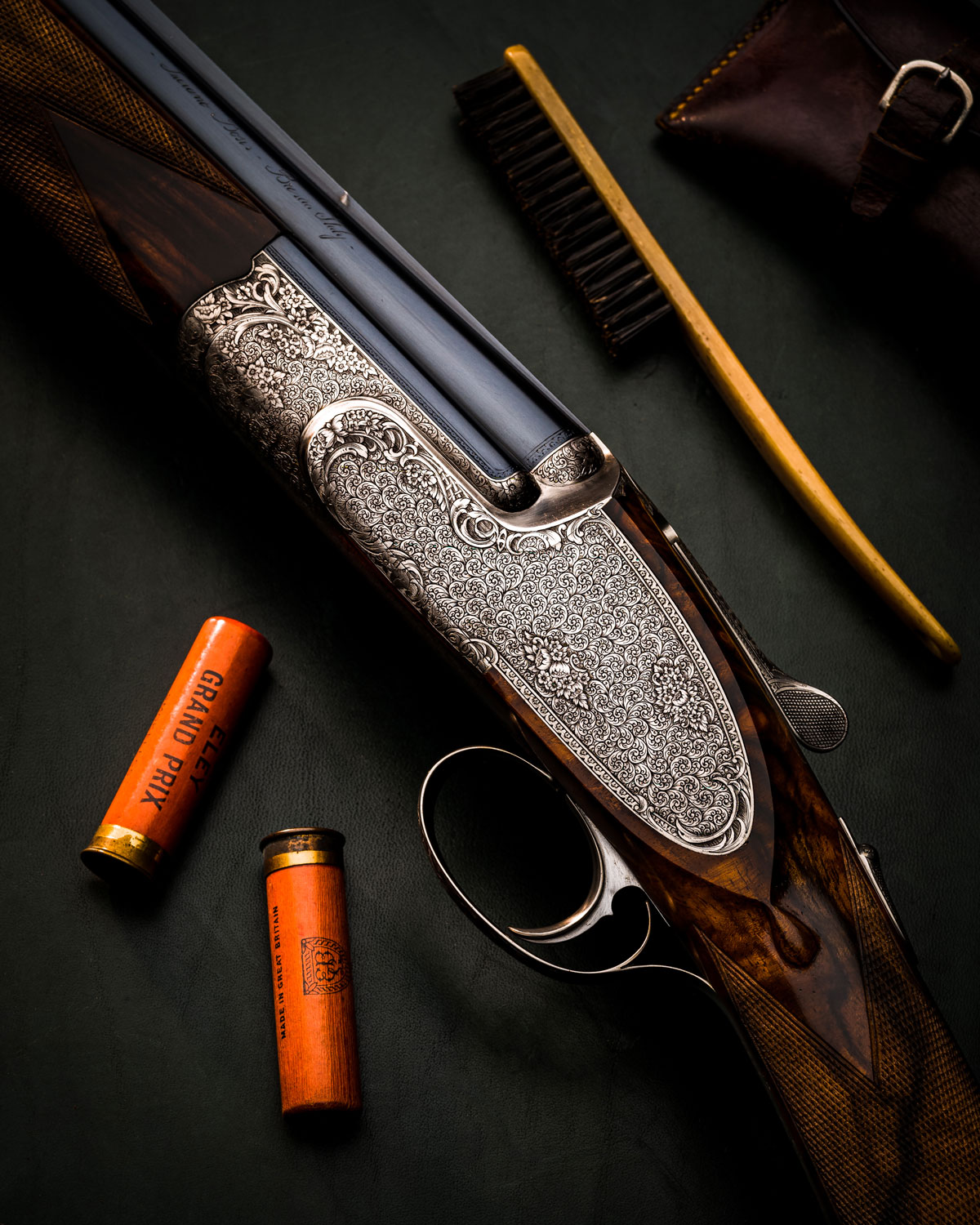 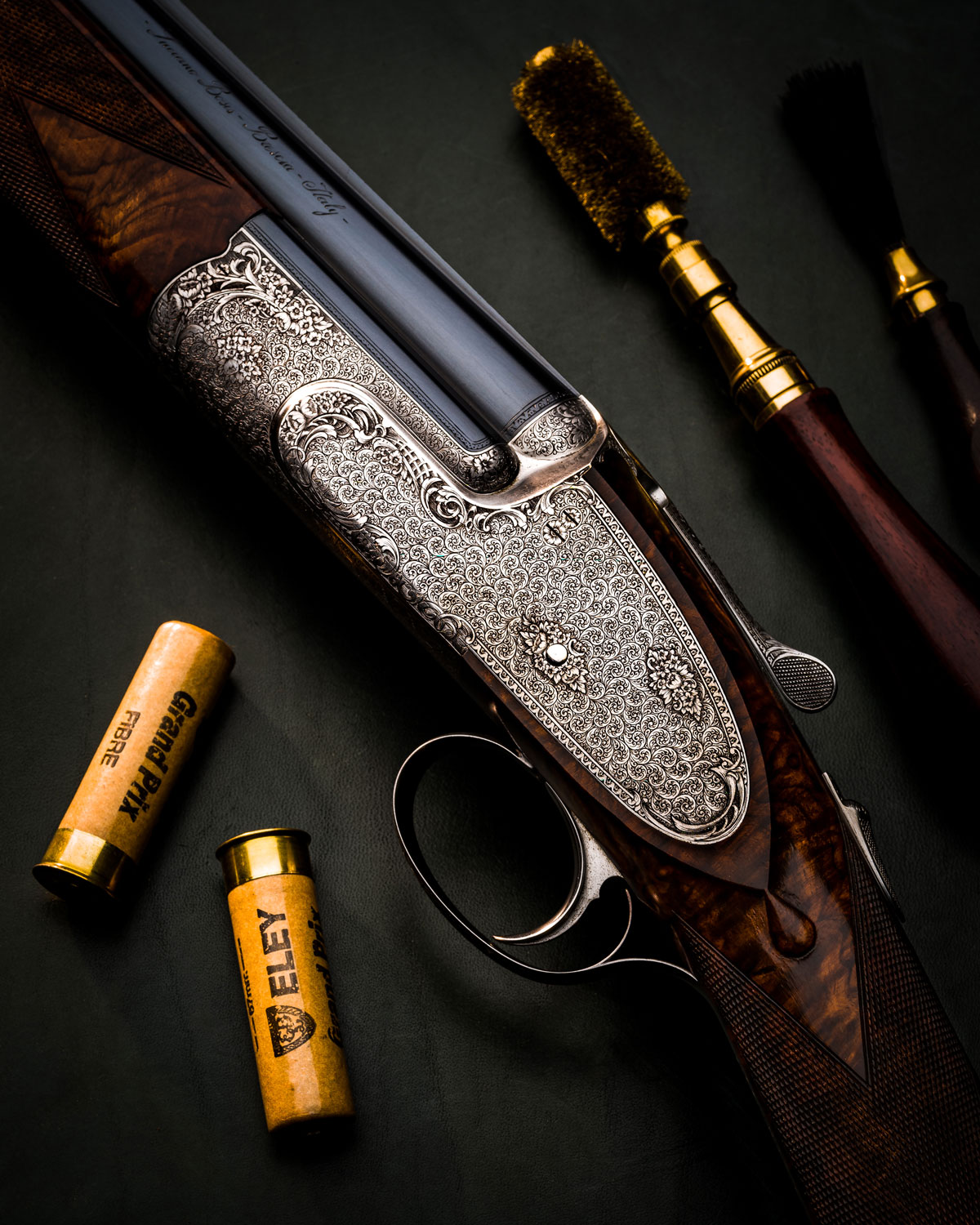 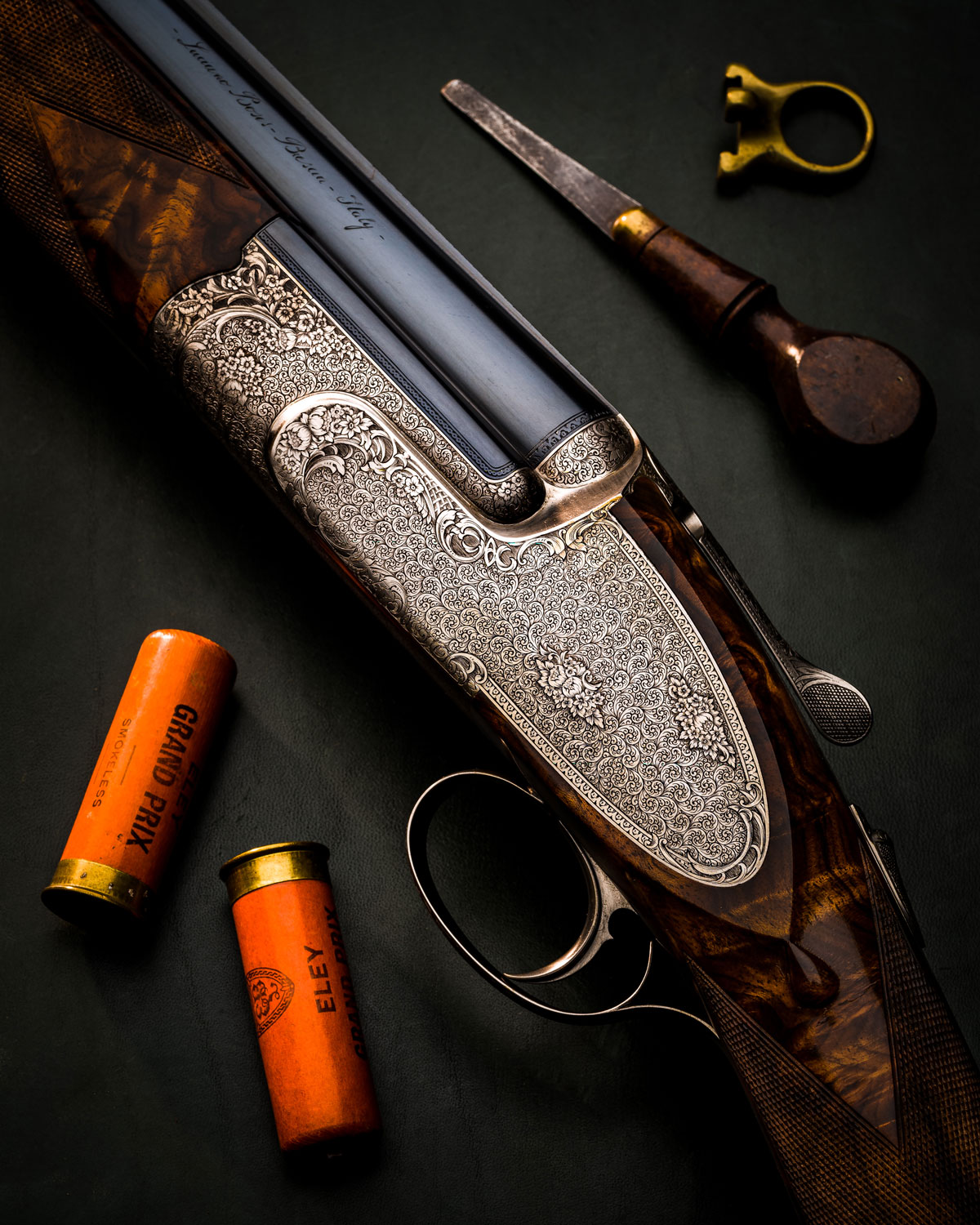 Specializing in o/u shotguns only, Mr. Bosis offers 4 models, the Michelangelo being the highest grade and only sidelock ejector.  The Michelangelo SLE is described as a Boss type o/u, which refers to the bifurcated lumps on the sides of the barrels most notably associated with the Boss & Co. patent of 1909. The resulting action depth is not as tall as something like John Browning’s Superposed design that incorporates two lumps on the bottom of the barrels, the front one pivoting on a hinge pin. John Roberts’ Boss O/U was the first of this design but was closely followed by James Woodward & Sons version 4 years later, which also used a type of bifurcated lumps but notably, with a more simplified trunnion system. The forward lumps on the barrels of the Woodward rotate on two posts on the action walls, much like the forward lump of a side by side pivots on a hinge pin. With the Boss system, the forward wedge shaped lump on the sides of the barrels rest in “yoke” or “V” shaped trunnions that rotate on the action walls as the barrels fall or are shut. The simpler Woodward design still has a slender, low profile like the Boss but lends itself more to production and is the basis for most of Italy’s best over/under shotguns like Fabbri, Perazzi, Beretta and, Luciano Bosis. 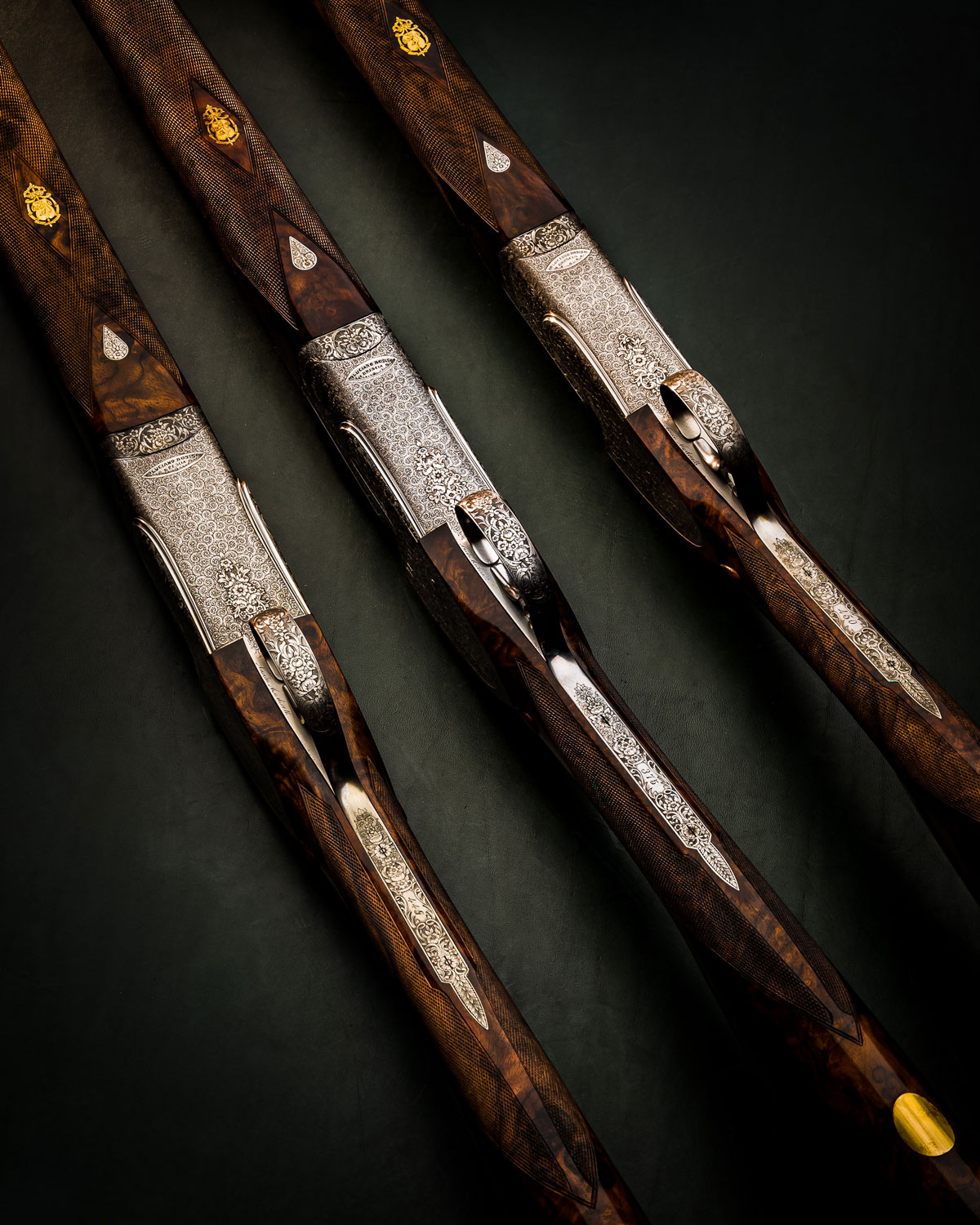 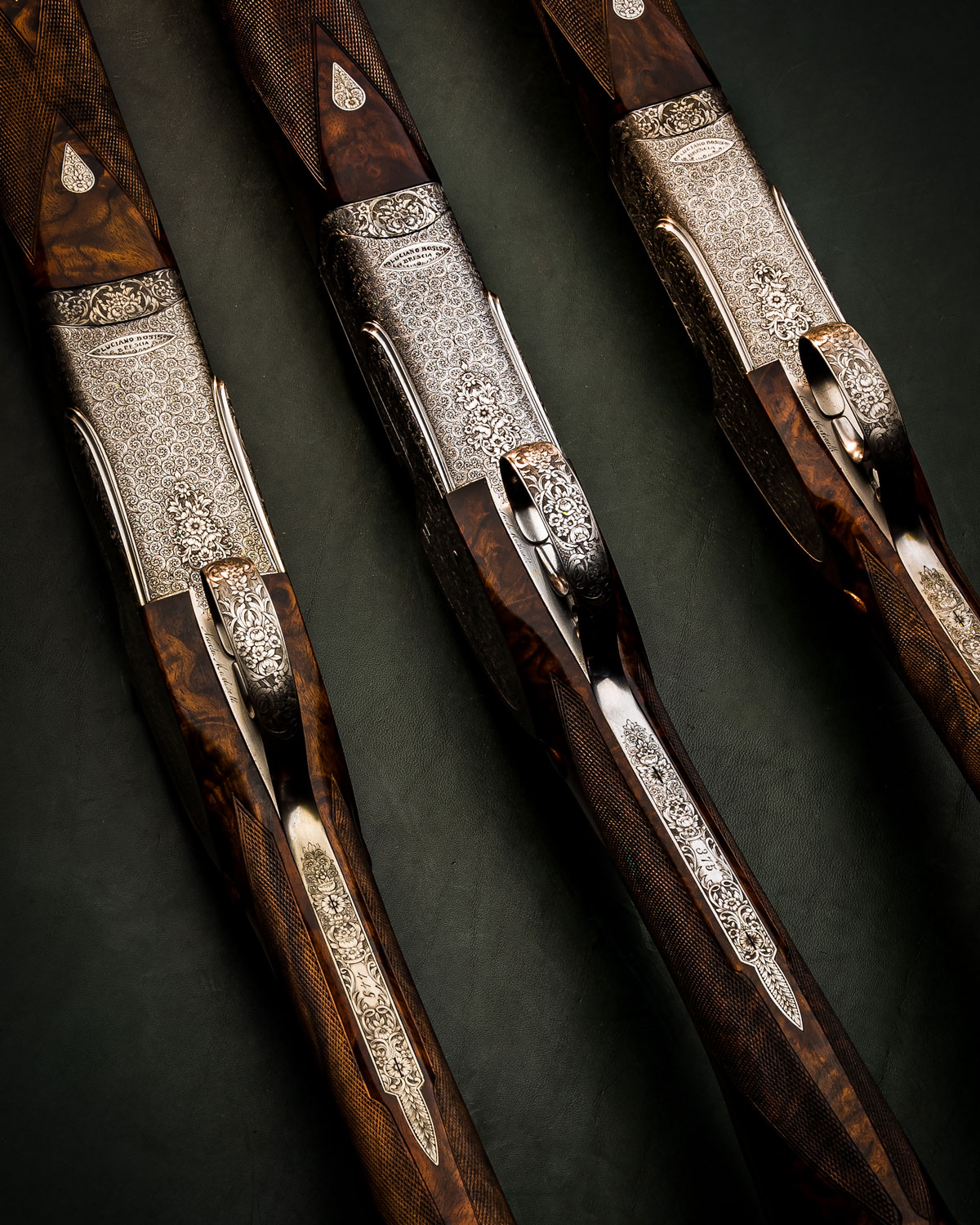 The client first ordered the 20g in the early 2000’s, ordering the 28g and 12g as a pair a few years later. Each gun is fitted with a single trigger, pinless lock plates and have beautifully filed actions. Built on appropriately sized frames, the 28g weighs 5 lbs. 14 oz., the 20g is dead on 7 lbs. and the 12g weighs 7 lbs. 12 oz.

Bosis guns are especially well known for having killer stock blanks and these guns certainly live up to that reputation. The highly figured Turkish walnut has contrasting colors and both vertical and horizontal figure. The stocks have straight grips, diamond shaped hands, and traditional drop points. They also have great dimensions, with 14 5/8” LOP over checkered butts and each one is masterfully checkered. The stock ovals remain blank and the maker’s crest is inlaid in gold into the forends. 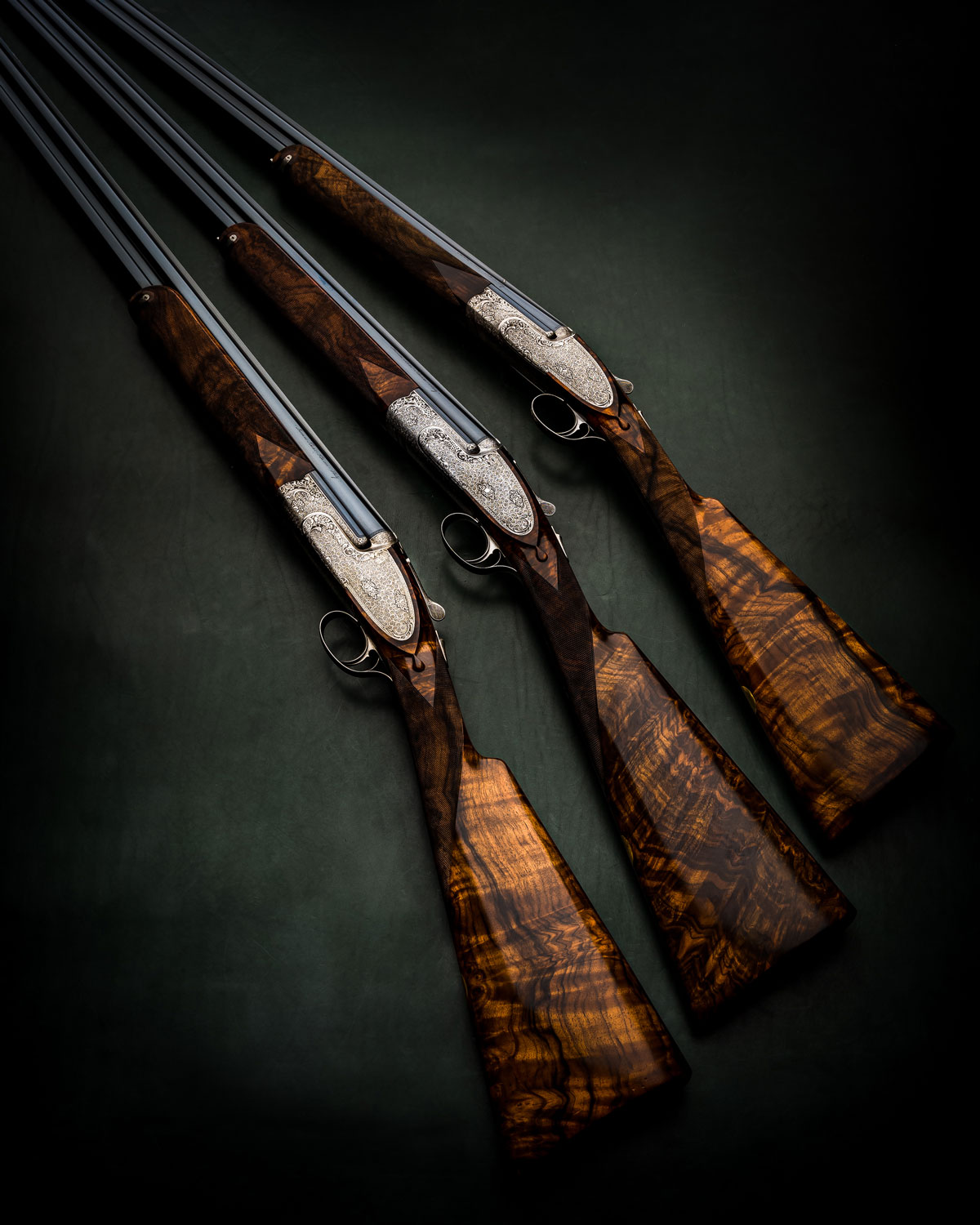 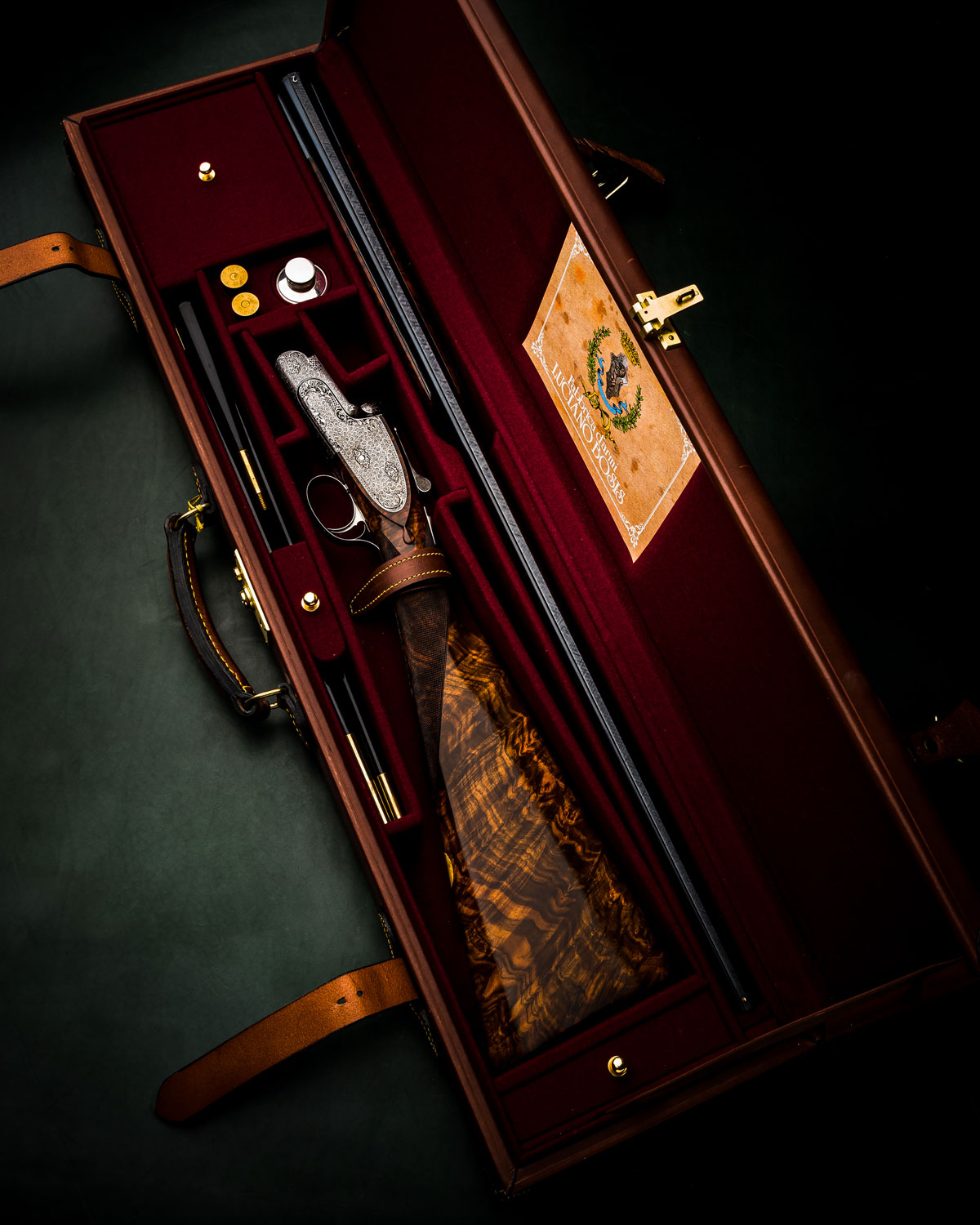 Finally, each gun is engraved in a matching, full coverage English scroll with flower bouquets signed by “Naida Martinelli” and brushed to a bright “coin” finish to further highlight the engraving.

This is a rare and stunning offering of guns that are testament to the superb reputation that master gunmaker Luciano Bosis enjoys.

These guns are now for sale at our U.K. showroom. Please contact Trigger or me for further information.