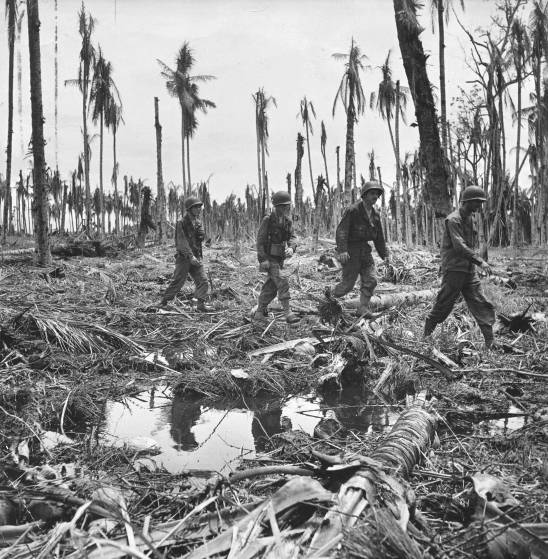 Westley Richards & Co. - A Company and its Character.

My Father, a Veteran of WWII combat in the Pacific Theatre had a few sayings and was not one to suffer fools. He could best be described as a very gentle man. Four amphibious combat assaults will apparently teach one much about themselves. At thirteen, I lost him too early. It is a strange phenomenon that we continue to learn from our parents long past adulthood, and even after they have gone ahead. There seems to be to be a certain imprinting that takes place and endures. 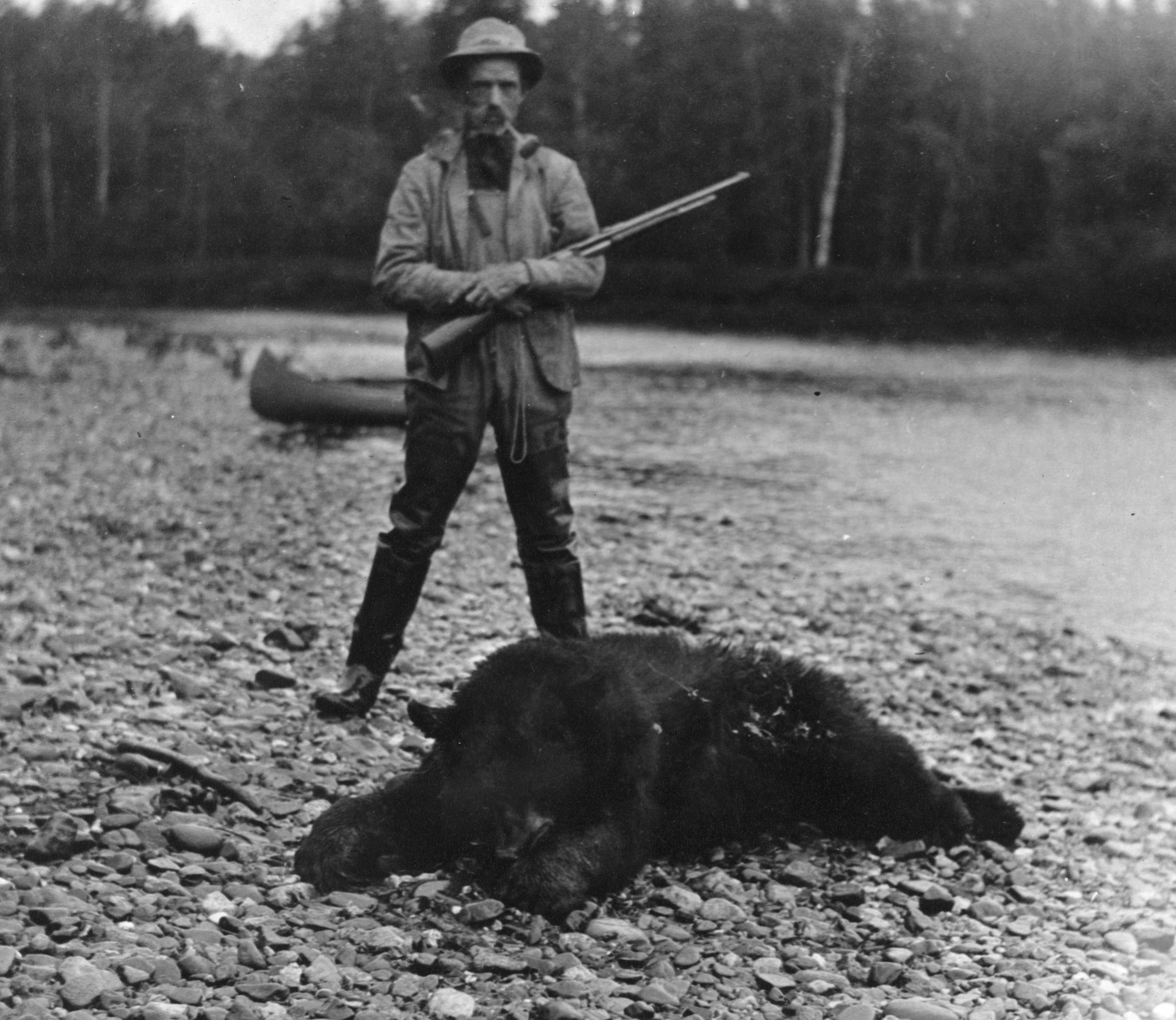 He had many sayings, which were as a practical matter his philosophies. He lived by them without much, if any, variation or discussion. One of these sayings I often think of and find can be applied to business dealings and the contingent relationships. “When all is said and done, let more be done than said”. I never met my Grandfather, he had passed early as well, but my Father spoke of what he learned from him in tough days during the American Depression. They fed themselves and family, gardening, hunting small game, and fishing. I hope that I have those qualities in my character.

Character can exist in many things and manifest itself in many different ways. It can make up and distinguish an individual, group, or nation as to how they conduct themselves and behave; it can separate distinguishable things into categories; identify a nature. It can separate things by its essential elements or traits; it can be a set of qualities that make a place or thing different from other places or things.

A good friend of mine for some thirty five years and a knowledgeable gun lover of the highest order just recently returned from a three week tour of Scotland, Ireland, and England. He had reserved a good part of the last week of the trip to visit London Gunmakers and a few dealers he was familiar with. In our conversation I expressed to him that I would like to make that exact trip. His response was, “Don’t. Instead see the tourist things in London, the famous Gunmakers are a waste of time, and no fun. I felt like I was at my in-laws”. This statement did shock me just a bit. He went on to tell me that he went into one of the most famous makers, at a most famous location and of three employees, not one, spoke even a single word to him. He is a good sport and can find humor in almost anything, and left the subject alone after the comment, “I suppose they would have taken cash, but they didn’t ask for it”. I actually found this hard to believe yet he assured me his account was accurate. He went on to tell me about his experiences at a couple of the other famous makers and felt it was a little better, but not by much and he just did not feel welcome. He came away with the impression that because he was dressed comfortably for a full day of activity that he was somewhat disqualified at a glance. He tells me that his experience at some of the dealer shops was an altogether the opposite experience, telling me what he saw and may follow up on. This man does not have a pretentious bone in his body nor any “chip on his shoulder”. If he is right, that he was dismissed just on his casual appearance a big mistake was made. This gentleman can impact an order book in a serious way if he so chooses, and likely has time for the wait. 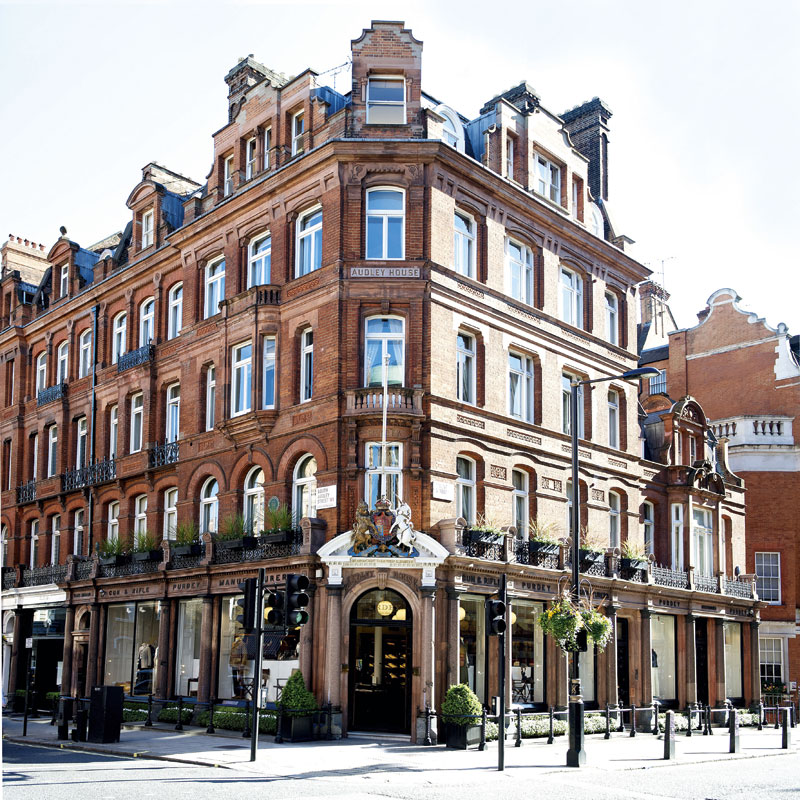 I do feel that this is an extreme example and at least hopefully not the norm. In full disclosure I have not made the trip, so have not had this experience personally at the London locations. This was not the first time I have heard this, but this time from a most reliable source. I have experienced it in a different environment at the large shows of SCI and DSC in the United States, admittedly not so extreme. The very nature of these shows is a little more relaxed. The puzzling thing that has occurred to me on many occasions is that I have looked at a maker’s guns and walked away without having either been taught anything about their particular guns nor have they solicited any questions or business. Maybe I am just lucky to get to see their guns or need to wear a suit.! They are not doing anyone favors by letting them look at their goods. Isn’t the purpose of being at these shows, for lack of a better description, an attempted outreach to new customers? This approach is baffling to me.

This seems to me to be a relationship model, maker to customer, which is completely inverted. It is at minimum in my opinion an organizational character problem. If in the previous account of my friends experience the front line sale force will not make contact, certainly there is little hope of anything more. The periodicals that I read which are both American and English are full of very well done, slick ad copy. These ads do give you a sense of what a company can do, at least for someone! This perceived ‘stuffiness’ is I am convinced at least one of the reasons there is a healthy used or secondary market in English guns. Of course there is the favorable pricing, immediate delivery, but I am suspect that it is also to avoid this stuffiness!

There are exceptions in my experience; 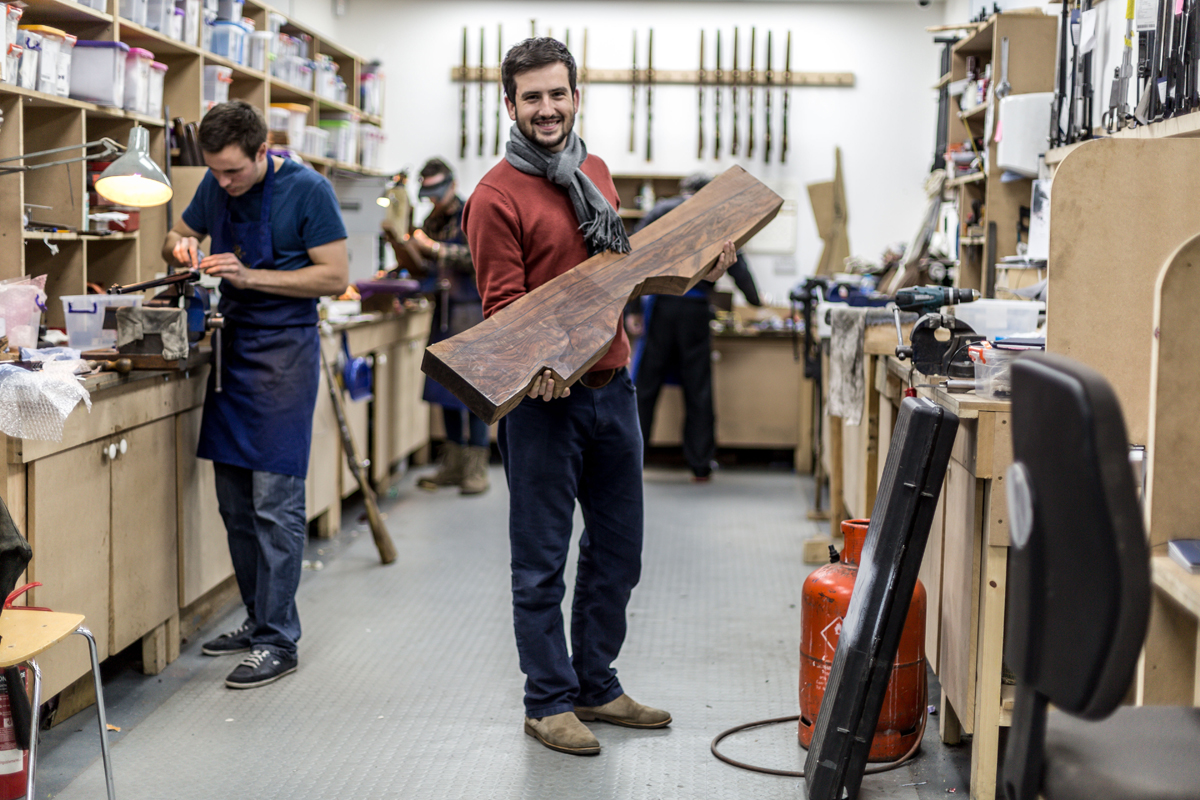 Marc Newton in the Rigby Workshop.

I believe over the last three years at DSC that Mark Newton, MD of John Rigby & Co. has recognized me, if not by name, and made an effort to answer any and all questions and go as far as to sit down and take a few minutes to have a friendly visit. They set their space up in a manner that facilitates, and invites this. This seems to me to be the purpose and value of being there. From what I can see they are on to a good thing, and I for one wish them well and greatly appreciate the way that I have been approached. I believe that they, “get it”.

I do believe, and this from personal experience, that Westley Richards is the standout in all phases of service and customer care and I hear this consistently from friends of mine who are clients. They also have great advertising content, with excellent photography, but this is not the end of it. They show a diverse catalog of new and used guns, along with restoration services, traditional in-house made leather goods with custom one-off capability. There is also a comprehensive retail side of clothing, foot wear, etc. It is approaching impossible to thoroughly cover all of the in-house capability that Westley Richards currently have. Even with this large offering of goods and services this is still not the end of it.

While this is all outstanding, it goes much deeper than this. There is a transparency that you will not see anywhere else and much of it displayed on The Explora. I think Ross Seyfried said it best in a previous post, “those in the workshop understand old things and their history”. Westley Richards staff know and understand the historic legacy and standards that comes together to form the character of the company. Because the folks working there gain an understanding of the company’s history and where it came from they gain an insight into its character. Those in leadership know that this understanding is just as important as the technical and trade skill competency. Should a project’s complexity require it, advice is available to a client not only from experienced and qualified manager of a particular department but from the owner of the company. I am sure it could be found at the smaller boutique makers as well. This same advice may exist at other makers and I am just not aware of it. If so and you find this opinion offensive; my apologies. I do not think though that so much knowledge across such a broad spectrum of products, guns, and rifles exist anywhere else. Not to mention used guns and restoration capability. It goes beyond sales, yes that is an element, but it manifest itself more in the manner of consultation and a way of doing business.

Where does this come from? It comes from knowing the company’s history. It comes from a family’s investment, dedication, and toil in a company through good and bad times. It comes from Walter Clode knowing the company’s history, where it came from, all the way to the turn of the last century and beyond and spending time in the land where many of the companies guns were sold and lived, repatriating those guns to be given a new life. This knowledge and experience being passed on to Simon to steward this legacy and at the same time moving the company forward as conditions require yet not forgetting the past and acutely understanding the character of the company. This cycle of work, failure, success, adjustment, and work builds character. The character of Westley Richards is one of perseverance, doing the best work that they are capable of doing, and being in a position to consult clients in a manner that gives the customer confidence. The strength and competency of the individuals who understand the history of a company, when in a collective creates a company whose core competency as a company then becomes one of character. When the day to day work and customer contact is being conducted in the context of a constancy of purpose, “to build the best gun that we can build”. When the leadership is making decisions in a cycle of continuous improvement, not forgetting the history and hard won character of a company. All of this separates, distinguishes, and creates a window of transparency into a company. I believe that knowing who they are is the strength of Westley Richards.

I believe they are very much a company that exhibit, “when all is said and done, let more be done than said”.