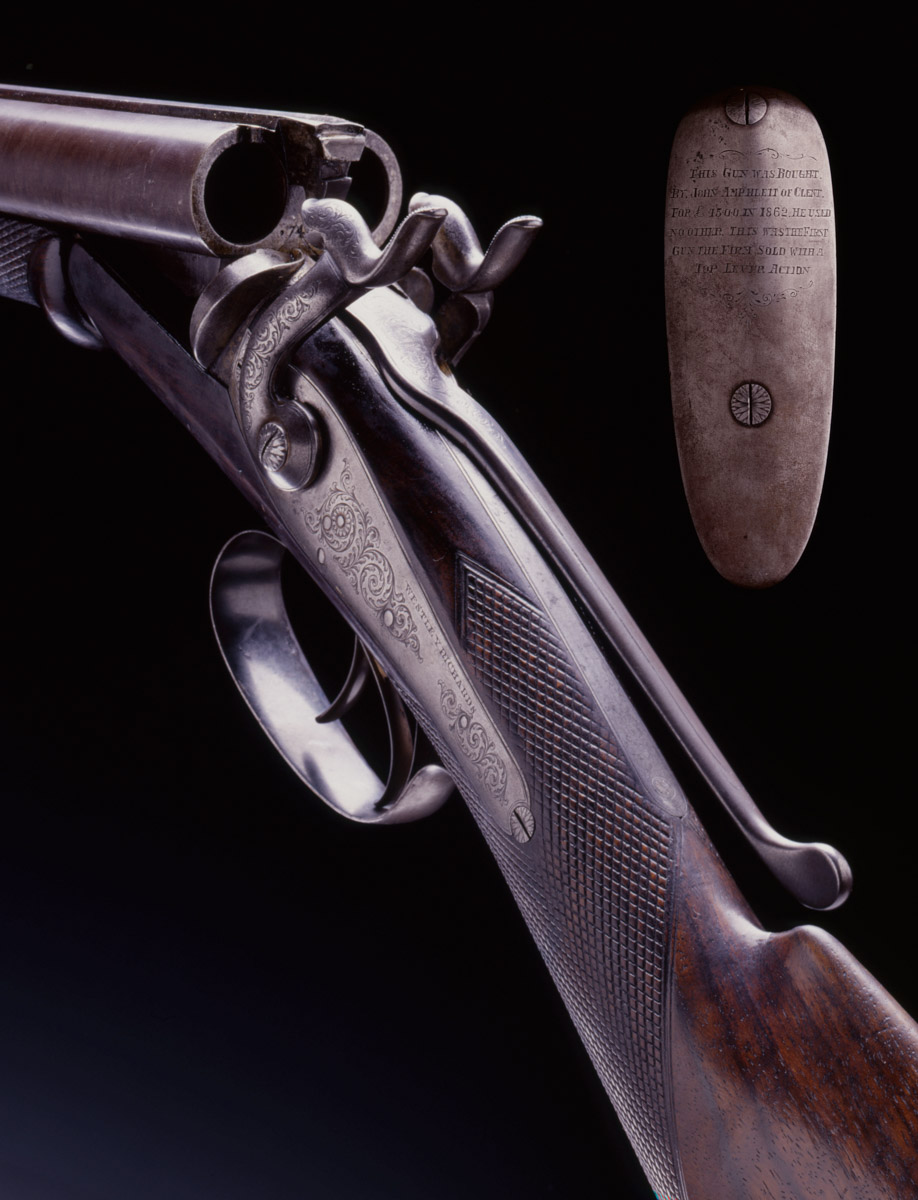 The Hammer Guns of Westley Richards.

The breech loader got its real introduction to England in 1851, when Casimir Lefaucheux exhibited his breech-loading pin-fire at the Great Exhibition in London’s Crystal Palace. Legend has it that Edwin Hodges, a multi-talented ‘gunmaker to the trade’ with Islington workshops, made an adaptation of the Lefaucheux gun for the established West End firm of Joseph Lang.

Lang’s gun is widely credited as the first proper sporting gun in Britain that successfully combined pin-fire cartridges with a usable, forward facing, under-lever locking mechanism with barrels that drop in a hinge. The idea stuck and breech-loading pin-fires were to dominate the scene for the next fifteen years.

While this step-change in technology was instigated by a London gun maker developing a continental idea, as with so much else in the history of sporting gun development, Birmingham firms, including Westley Richards, were at the forefront of perfecting new concepts and devising better operating mechanisms.

Pin-fire ammunition, though quicker than muzzle loading, was imperfect and the quest to improve upon it was quickly underway. However, in tandem with ammunition developments, the other challenge was to provide a quick, efficient and safe method of locking barrels to breech face. Many sportsmen were afraid that the new breech-loaders would come apart in their faces. Others claimed no breech-loader would ever ‘shoot as hard’, to use a then common phrase, as a muzzle-loader. 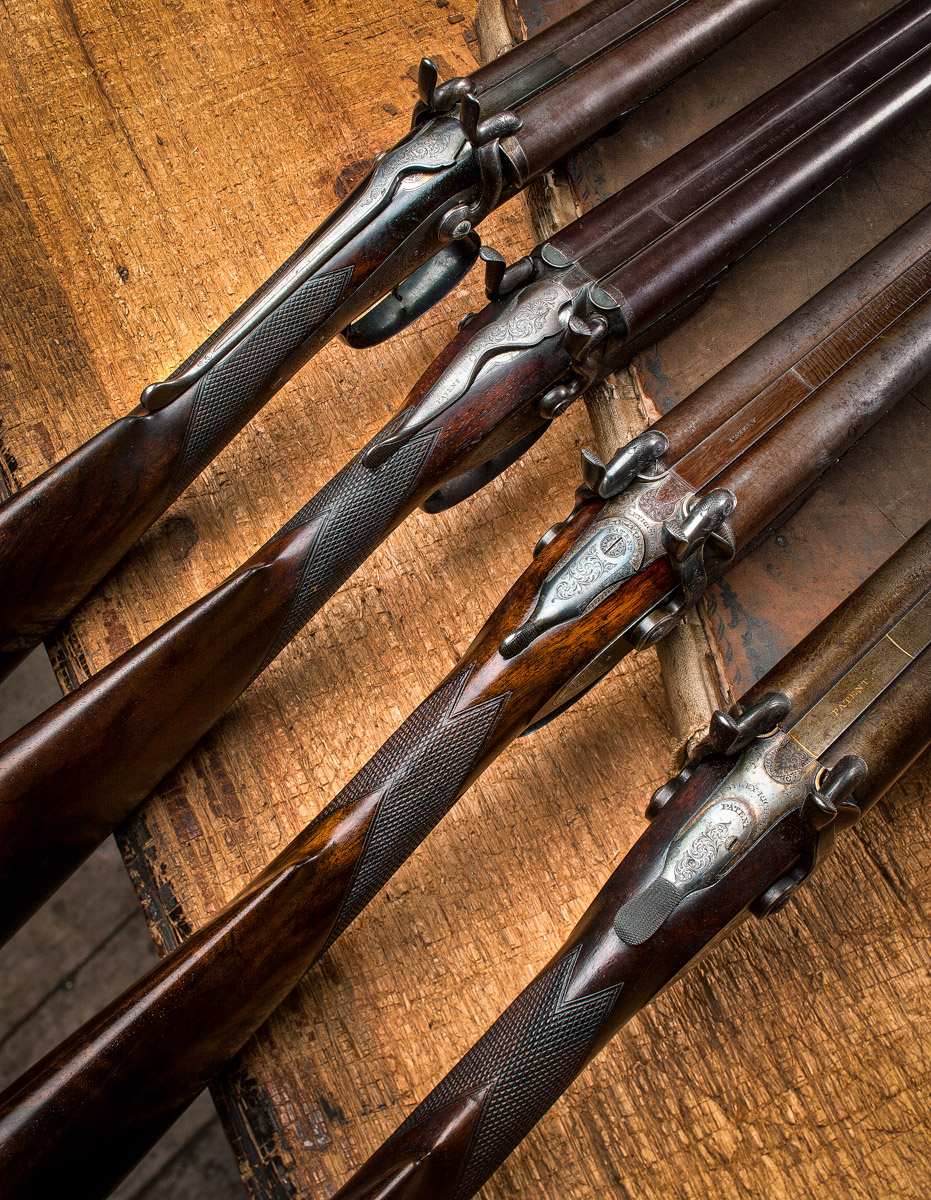 Among the first and most influential improvements on the rather flimsy Lefaucheux locking mechanism was the Westley Richards ‘doll’s head’. This is based on a projection from the breech ends of the barrels, extending from the rib. It has a rounded ‘head’ with a slot and the whole is drawn into a corresponding cut-out in the standing breech. The slot is engaged by a sliding top-bolt, preventing gravity from pulling down the barrels once the gun is closed.

Very early guns built with doll’s head rib extensions had a simple, long turning lever, which blocked the path of the doll’s head when closed. The first of these was made in 1858 as a pin-fire.

The first version of the, now familiar, system employed on Westley Richards guns features an 1862 patent sliding top-lever, rather than one that pivots. It most closely resembles the more commonly encountered Horsley of 1871 in the way the lever is operated. When the lever is pulled back with the right thumb, it slides the locking bolt out of the slot in the doll’s head.

The second version quickly followed in 1864 and became the basis of a classic. While examples of the first version are rare, those of the second version are legion. They span the pin-fire and centre-fire eras. In this second version, the lever rotates to the side when pressed with the right thumb. This rotation operates the removal of the top-bolt from it’s slot. This is still the sole means of securing the barrels to the action. To modern eyes it seems flimsy but it works and many guns built this way are still in regular use. It was employed on both shotguns and double rifles. 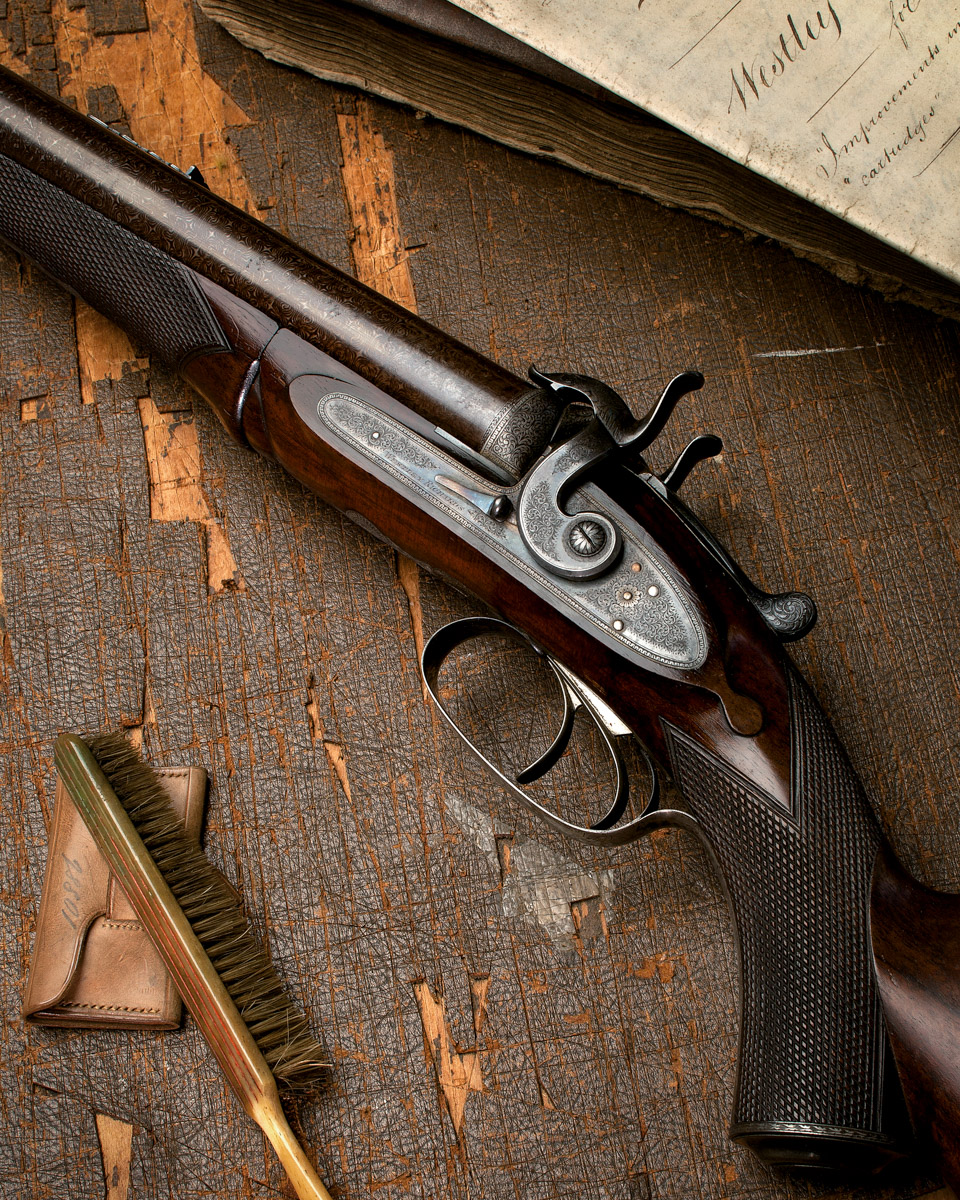 The Westley Richards treble-grip bolting system was used by other firms in the wider gun trade but far less commonly than the combination of top-lever, Scott Spindle, or Greener lever-work, operating a Purdey bolt. The wider trade favoured simplicity and the doll’s head concept was often imitated in the form of similar looking devices without a third bolt or grip. Third grips became a feature of Birmingham guns, while many London makers preferred the cleaner lines of a gun without a rib extension, preferring to rely on well-made actions and a Purdey bolt alone.

Greener’s rival ‘Treble Wedge Fast’ concept consists of a simple vertical slot in the breech, accommodating a rib extension that drops in, drilled with a hole to accommodate a round-section bolt, which slides into place horizontally, thereby bolting the barrels to the action through the fences, as well as via the Purdey under-bolt. The wider gun trade adopted versions of this system in all grades of gun. When made well, it is very secure but in lower grades, where the fit of parts is not perfect, the benefits of the Greener top-bolt are dubious.

Some firms even adopted a version of the doll’s head without any kind of bolt. The concept persisted with designers and the doll’s head extension became a key part of the Webley & Brain screw-grip action that was so widely used throughout the gun trade in the late 1800s and early 1900s. 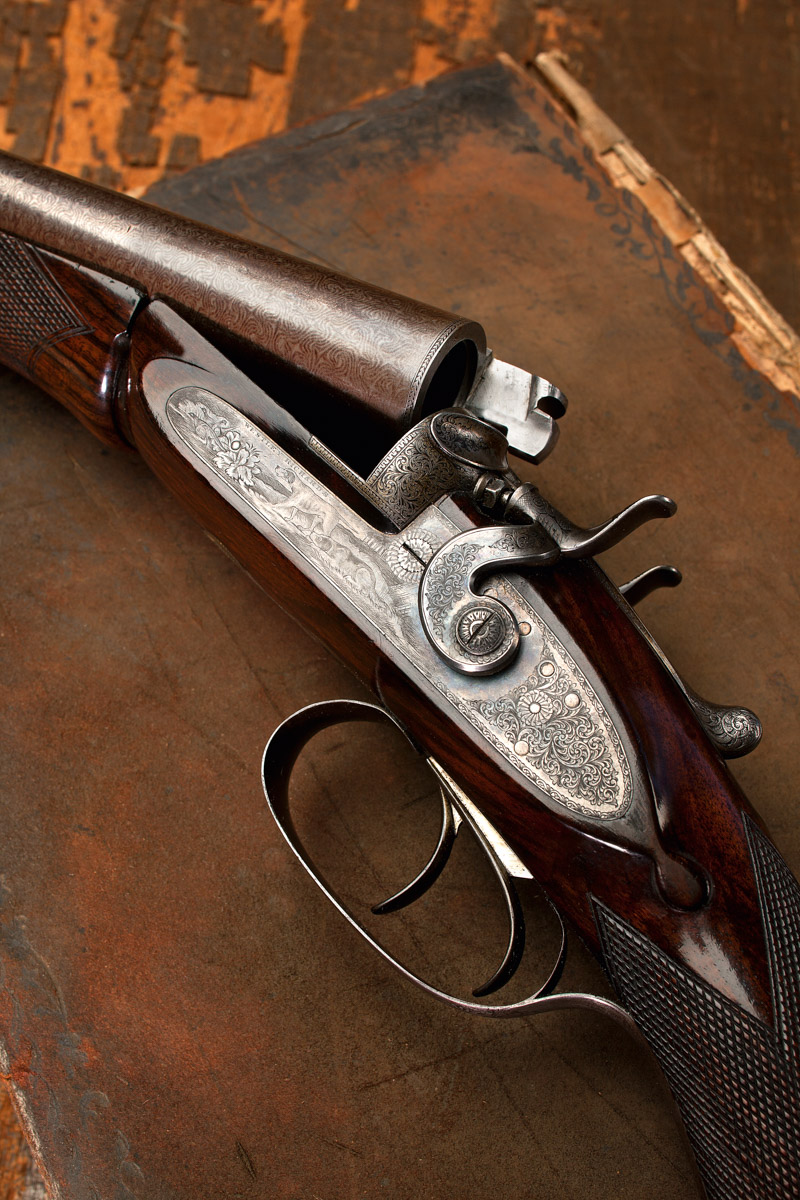 The aesthetic norms for hammer guns developed along with the mechanical improvements. Early Westley Richards guns will typically be of bar-in-wood form, with most of the metal of the action covered by a veneer of stock wood, extending to the knuckle. The forend wood is similarly shaped, with wood enveloping the forend iron and looking somewhat like the hinges in the exoskeleton of a crustacean, hence the widely used term ‘crab joint’ to describe this style of gun.

As the 1870s progressed, hammer guns gradually lost their wood coverings and became the familiar pattern of exposed locks and actions with stocking limited to the areas behind the action and forend wood reducing to the, now familiar, ‘splinter’ style, with an exposed iron fitting into the knuckle. 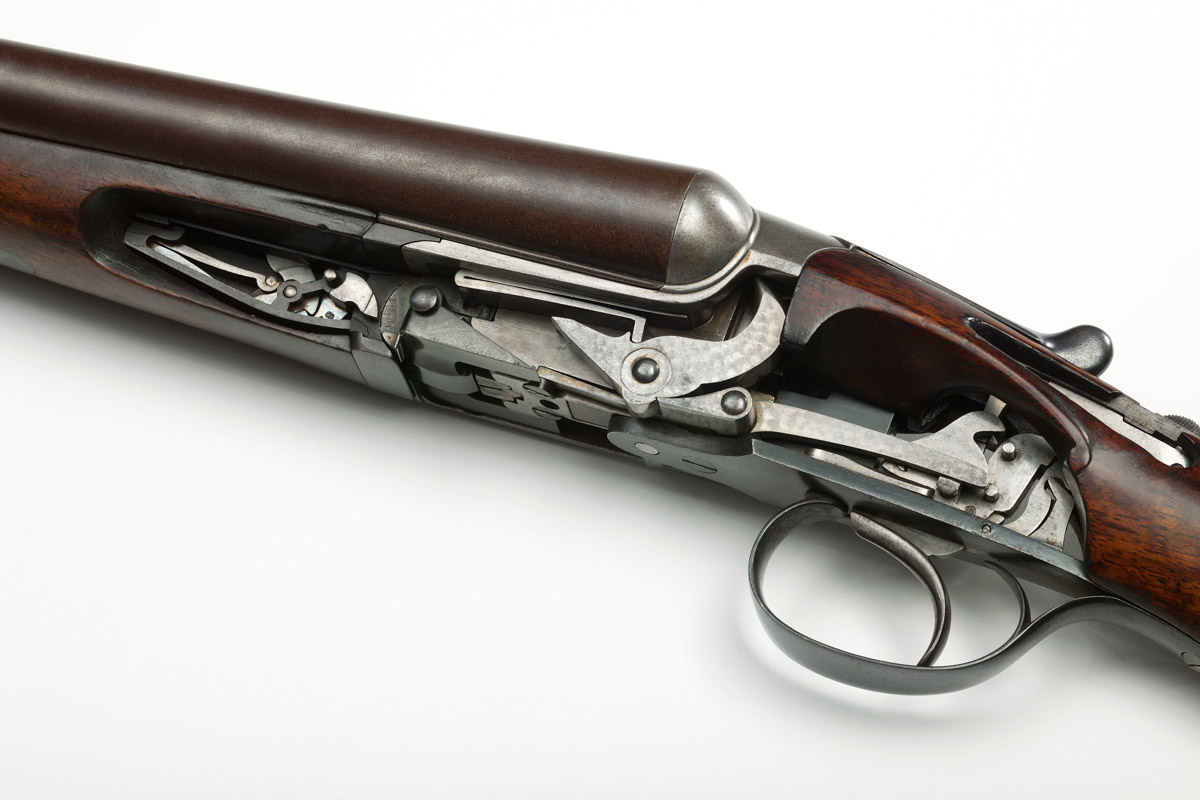 Westley Richards were early to the party when hammerless guns began to gain favour. As patentees of the Anson & Deeley action in 1875, the firm were quick to favour this simple, brilliant and reliable hammerless gun as their house style, while many other firms continued to make hammer guns and experiment with various styles of hammerless action. I think that in the minds of the Westley Richards directors at the time, the hammer gun era was over in 1875.

My thanks to Diggory for this short article on our hammer guns which I asked him to write when he visited last week. Diggory has just released a new book "Hammer Guns in Theory and Practise" The book is available here and provides a very comprehensive account of this model gun. 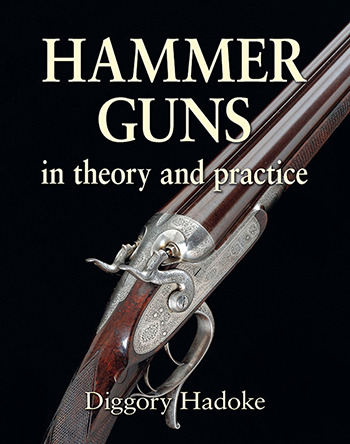