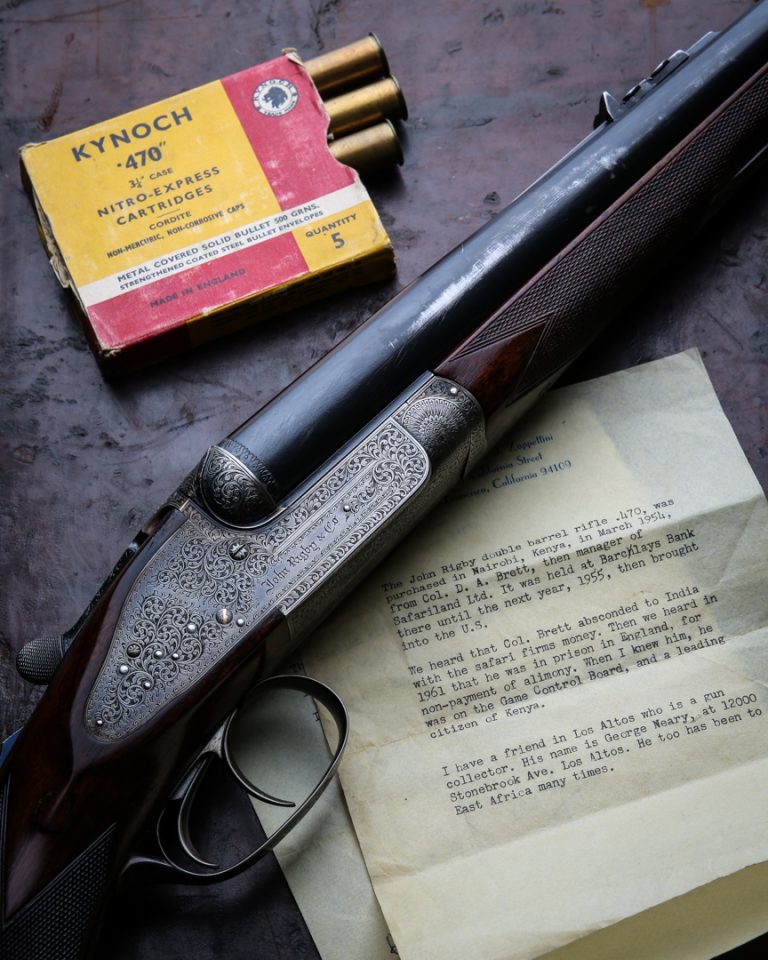 How gun engraving went from the rather plain, simple scroll and two dimensional, naïve renderings of birds and big game in the 19th century to the dynamic scroll and near photographic quality of game scenes we expect today is due in large part to English engraver Harry Kell. His influence permeates through gunmaking history through the engraving patterns he executed and created for other makers, the various engravers he taught and employed, and the style of engraving he introduced.

Henry Albert Kell, known as Harry, was born in 1880 or 81. His grandfather was a coppersmith and his father, Henry John Kell, was an engraver. Henry Sr. apprenticed to Thomas Saunders who ran a small engravers shop and he eventually became partners with Mr. Saunders. Harry showed promise at an early age with his pencil drawing and keeping with the tradition of “following in his father’s footsteps”, at the age of 14 Harry was apprenticed as an engraver to his father.

By 1900 Harry was a journeyman engraver, and he continued his employment with Saunders & Kell until Mr. Saunders died in 1919. That same year, Henry Sr. took his son into partnership and changed the name of the business to Henry Kell & Son. The Kell engraving shop employed a group of engravers capable of producing, with very high quality, the individual house engraving patterns for various gunmakers in the U.K. In addition, the shop offered very specialized carving and game scene engraving, which Harry Kell is best known for. In 1928 Henry Sr. died and Harry carried on engraving at the same address until, under failing eyesight, he moved to the Purdey factory in 1957. He died in 1958.

The Kell workshop, along with Sumner’s (more on him in a future blog), accounted for much of the engraving work done in the English gun trade prior to WWII, but Kell is most often associated with J. Purdey & Sons. Kell’s shop could produce some of finest renditions of Purdey’s famous “rose & scroll” engraving that engraver James Lucus is credited with creating. However, Kell is credited with creating Purdey’s Extra Finish engraving. This is a bold acanthus scroll pattern and basically Purdey’s “deluxe” engraving that is still available today and quite different than the delicate small scroll and rose bouquets of their house engraving. 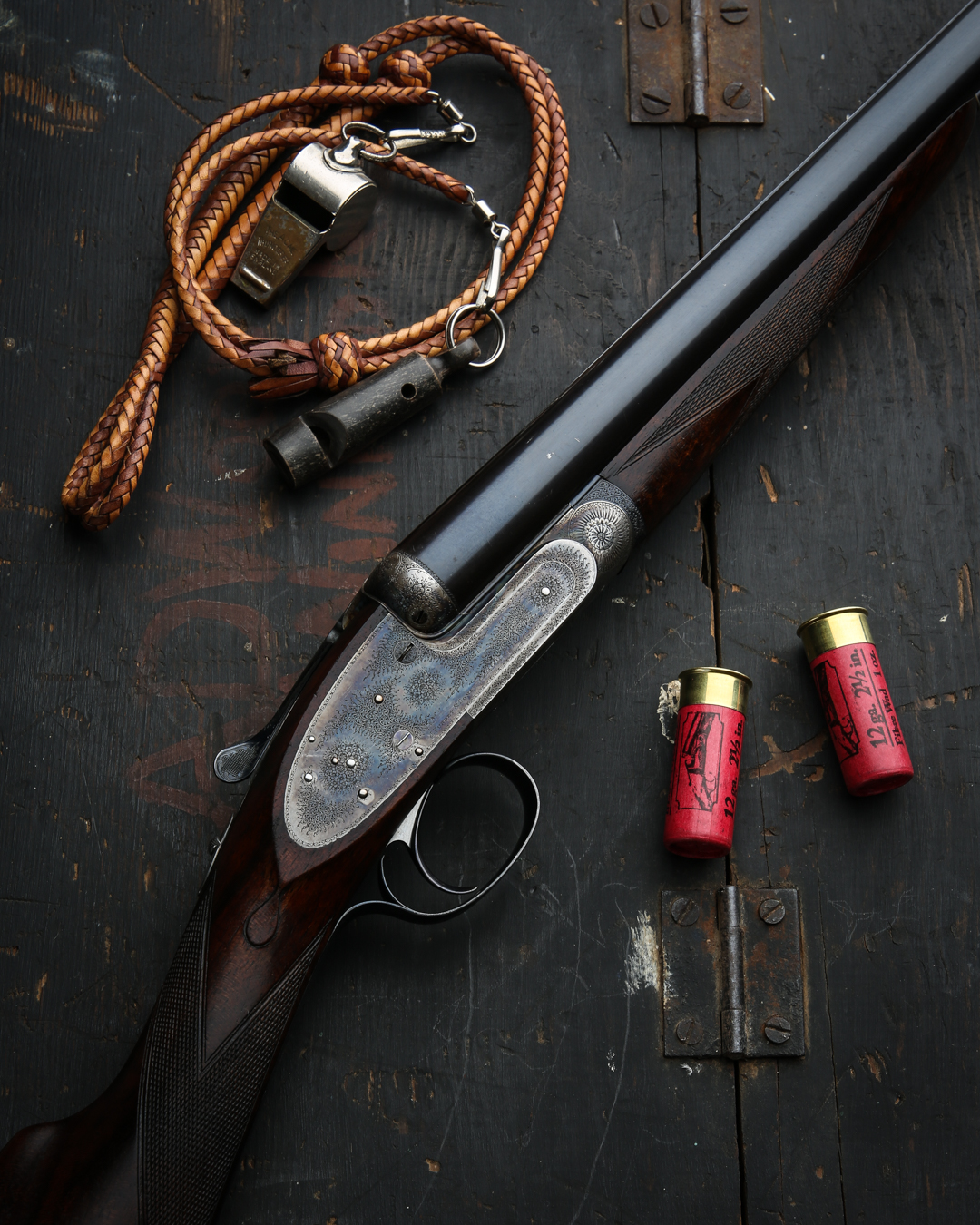 Purdey & Sons 12g Hammerless Ejector completed in 1926. This is a wonderful example of Purdey’s famous rose and scroll, simply noted as “standard fine” in factory ledgers. Created by house engraver James Lucas in the 1870s’ and, to many, it is the quintessential “London” best engraving. This engraving is no doubt expertly executed and attributed to Harry Kell . The engraving is not only beautiful but well cut making it durable and long lasting. 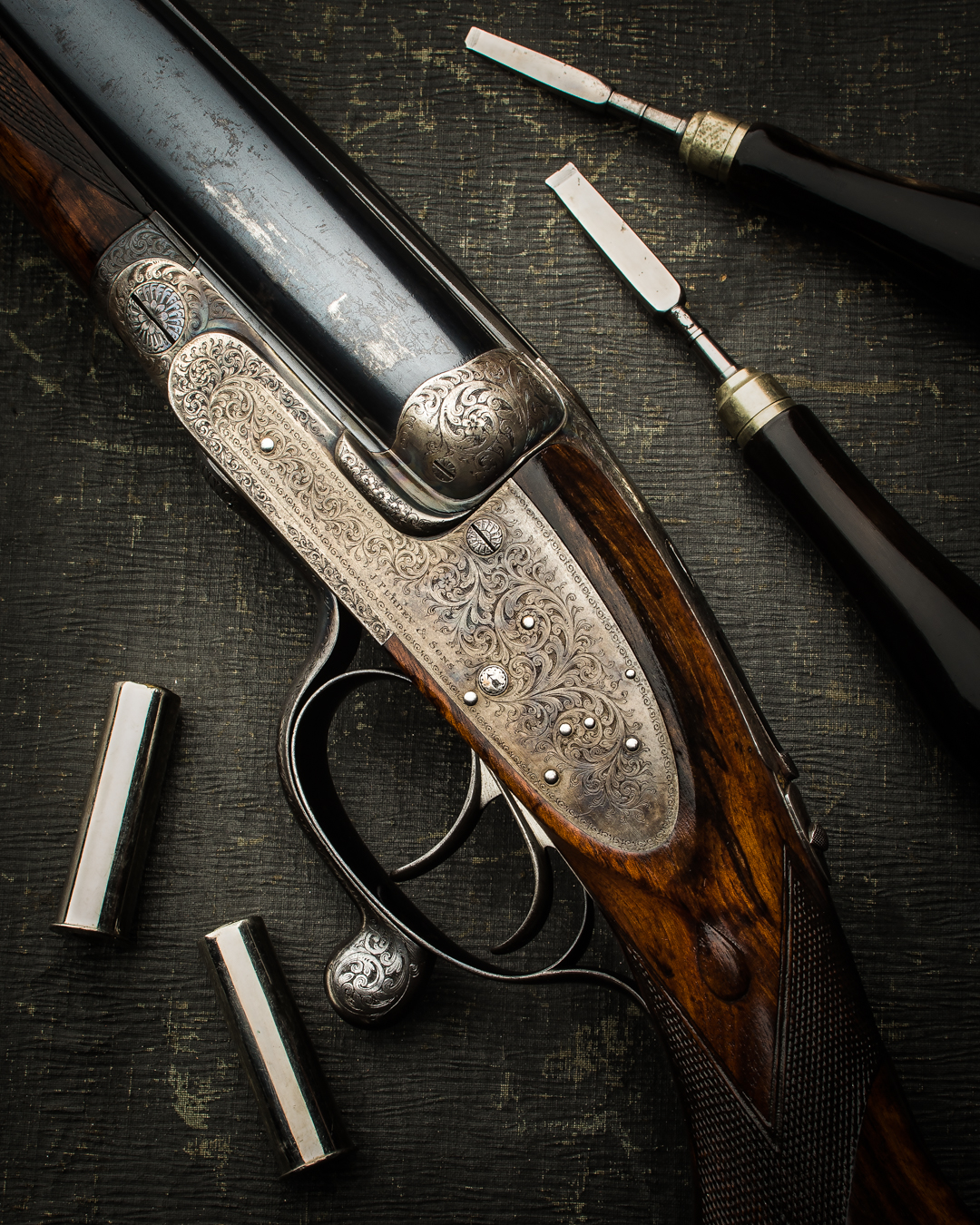 Kell engraved countless guns and rifles throughout his career and he also taught and supervised numerous unnamed engravers who openly used his pattern book. Christopher Austyn details in his book, Gun Engraving, that work in the shop consisted of piecework that was carried out by various engravers. Each part of the gun to be engraved was given to a different man and, using a small library of reference patterns, the pieces by each man would be identical upon completion. Douglas Tate also points out in his book, British Gun Engraving, this “school of Kell” engraving is often attributed to one man when, in reality, the engraving was done by a team of anonymous engravers. 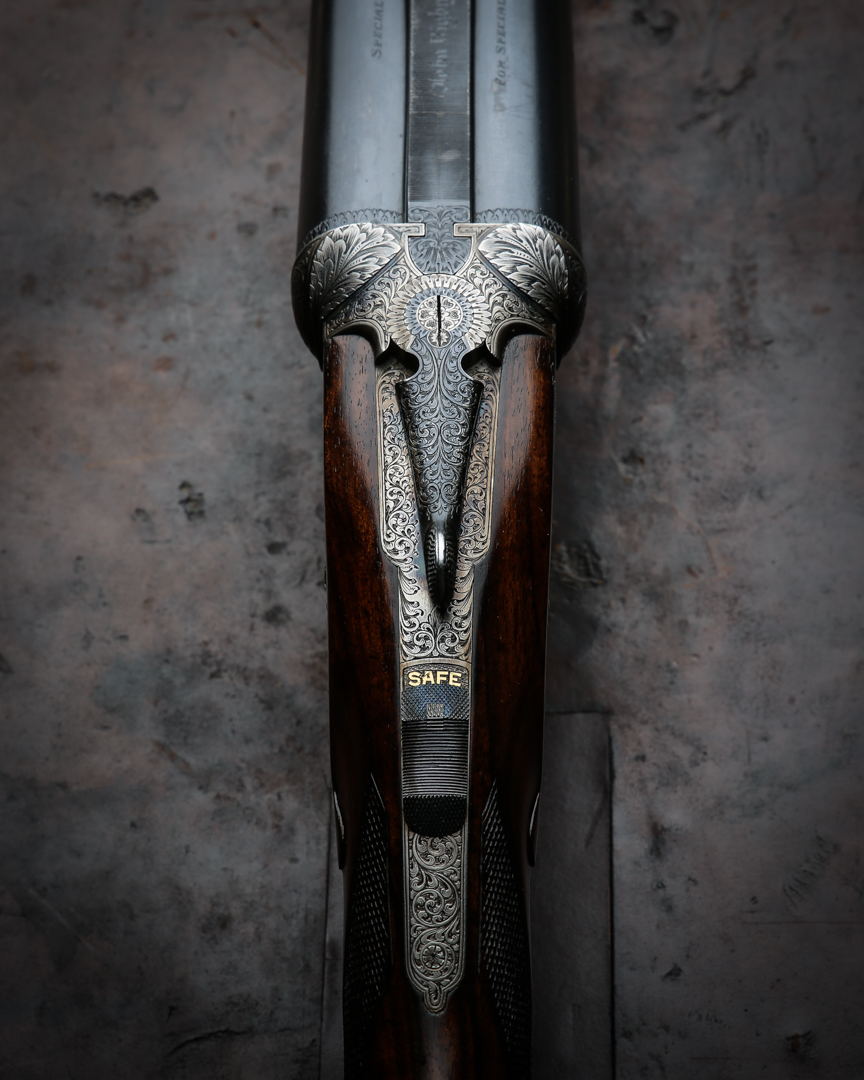 J. Rigby & Co. Special .470 Bore Best Quality Sidelock Ejector completed in 1932. Factory ledgers indicate this rifle was sent the Kell workshop. The superb execution of Rigby’s house pattern with the carved leaf fences is noticeably better compared to other comparable examples. The rifle was probably engraved by several different tradesmen, regardless, the quality of the engraving and carving is exceptional.

However, there were a few engravers who learned under Kell’s watchful eye who did not remain anonymous. Geoffrey Casbard and Ken Hunt are two of them that remain very well known today. Hunt started his apprenticeship at Purdey’s in 1950 and Mr. Casbard served his apprenticeship from 1955 to 1960. Both men studied under the great Harry Kell as two of his last apprentices. At this same time, Kell employed Mr. Jim Jones (formerly of Sumner’s workshop) and Mr. Bill Smith. Mr. Jones had been engraving small scroll and floral patterns since he was 13 years old, and Mr. Smith was equally experienced and specialized in large scroll. Of course, there was Mr. Kell who specialized in-game scenes and carving and each man was a master of his respective type of engraving. Mr. Hunt and Casbard both learned under these masters and were eventually capable of executing a variety of different engraving types.

In an interview from the Shooting Sportsman September/October issue of 2016, also by Douglas Tate, entitled The Godfather of Gun Engraving, the revolutionary influence of Ken Hunt, Mr. Hunt gives a firsthand account of how the work was carried out. He describes six to eight engravers that worked in a sort of assembly line, what he referred to as the “chain” system. One man did the small scroll, then it was passed to the second engraver for carving the fences (detonation), and the third would do the lettering. Under this system, he says, “A gun would come in on Monday and be collected Wednesday”.

He also goes on to say, “Later things changed, but we were in limbo between the old jobbing type of engraving and the new art engraving. Purdey’s would drop off a gun engraved by Barré [a French engraver (see Doug Tate’s Shooting Sportsman article, An Engraver of ‘Bests’. The mysterious Purdey engraver Aristide Barré) and say, ‘Can you copy that?’ and Kell would say, ‘Yes.’”.

Mr. Hunt describes for us not only the diversity of work the Kell shop could reproduce but the dizzying pace at which they could do it with a number of highly skilled engravers collaborating anonymously under the Kell name. 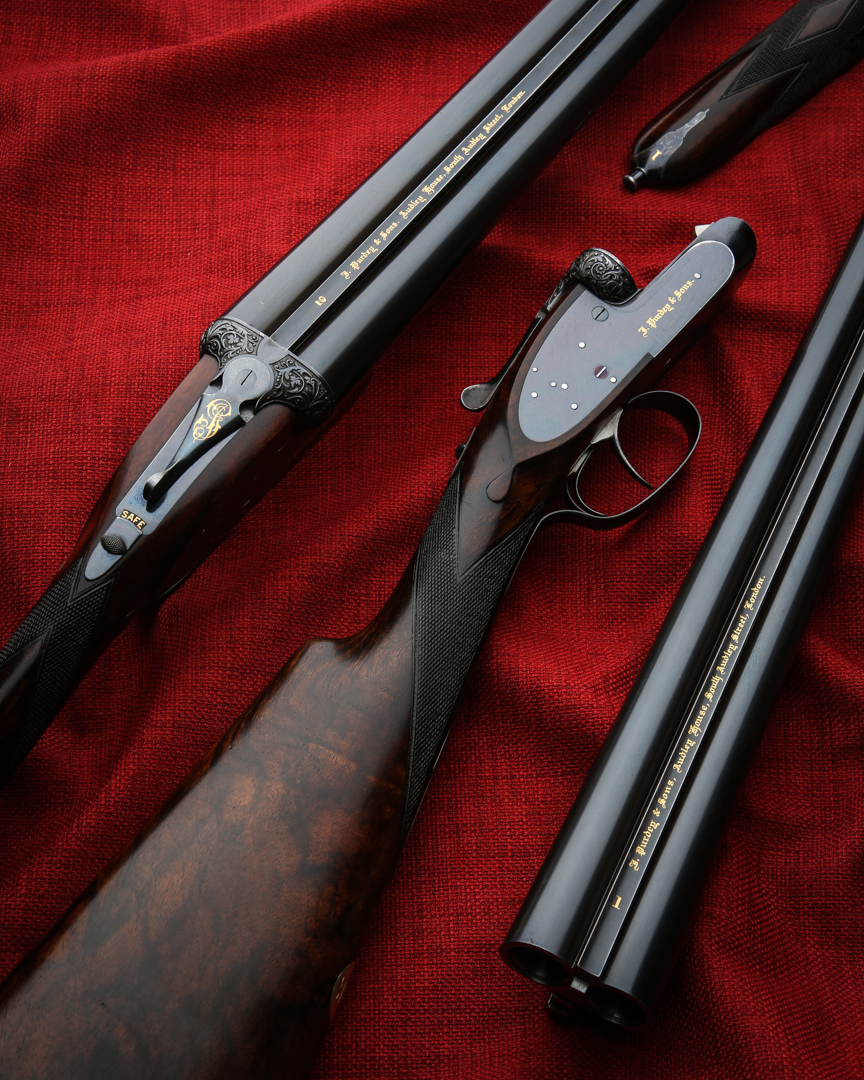 Pair of J. Purdey & Sons 12g Hammerless Ejector Guns completed in 1922 are an exceptionally rare pair of guns with “un-engraved” lock plates with only the maker’s name inlaid in gold Olde English script and carved fences. The deeply carved vines and flowers are strikingly similar to the detonation on a Purdey 8 bore with Extra Finish engraving completed in 1923 and attributed to Harry Kell and featured in British Gun Engraving (pg. 48).

Perhaps Mr. Kell’s biggest influence on gun engraving was introducing a realism and sense of movement to game scene engraving on firearms that had not been seen prior to his rising to prominence. In, British Gun Engraving, Mr. Tate demonstrates how game scene engraving on firearms has always been heavily influenced by what was popular in the art world at the time. To that point, Mr. Kell’s highly detailed depictions of game animals, with sweeping views of their natural habitat, was more akin to the watercolors of Archibald Thorburn than the naïve, sometimes childish renderings of game animals that were common on firearms preceding Kell’s time. Rightly, Kell is credited with ushering in a new style of engraving, that is the foundation of the highly detailed, lifelike engraving collectors of fine guns demand today. 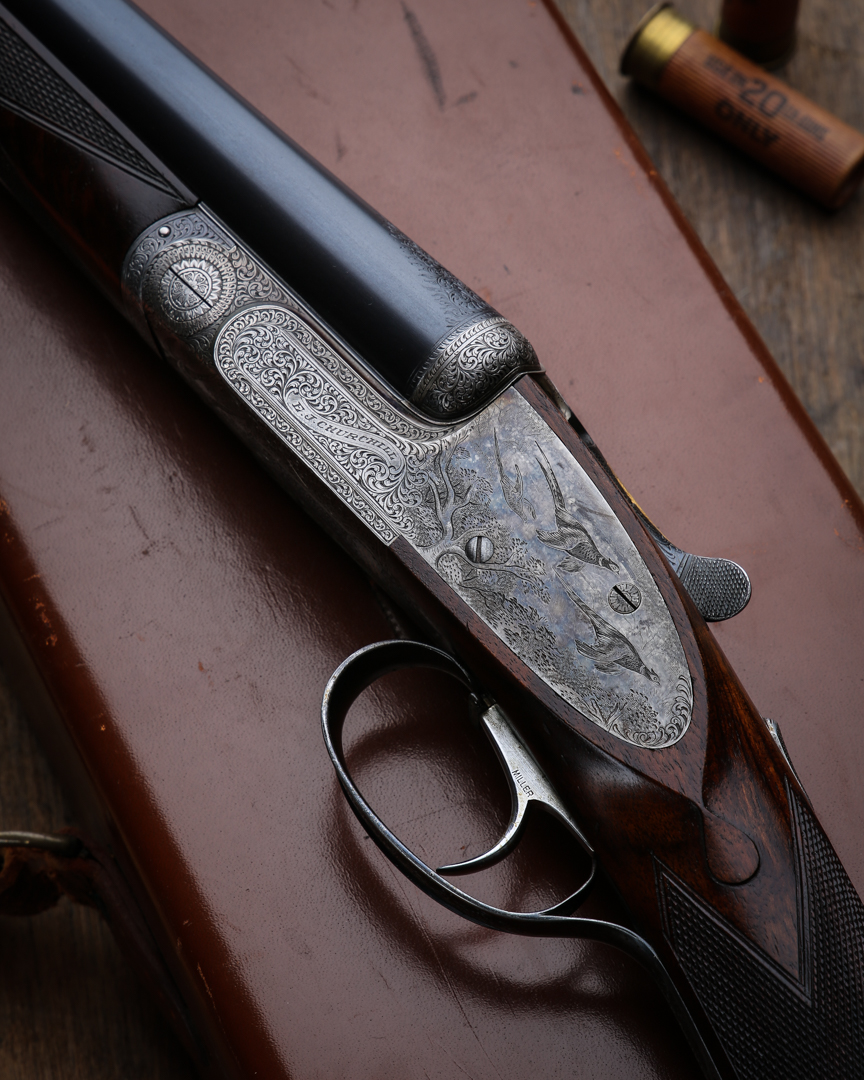 E.J. Churchill 20g The Premier Model XXV Sidelock Ejector Game Gun, also completed in 1932, is a very rare 20g with game scene engraving attributed to Harry Kell. While the records are not available to say for sure, the flying pheasants and sweeping landscapes are certainly done in the style Harry Kell made famous. 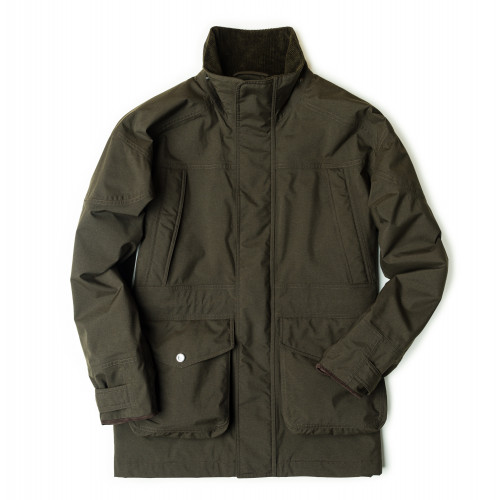 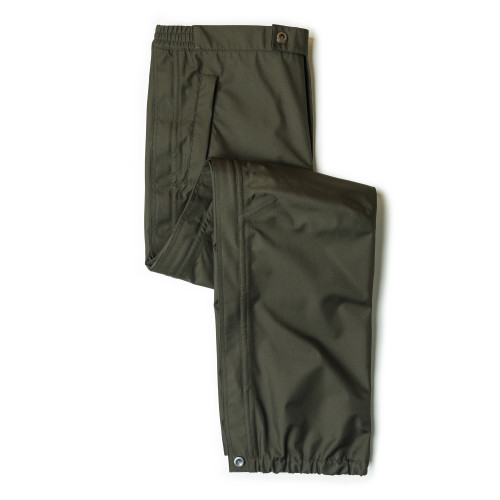 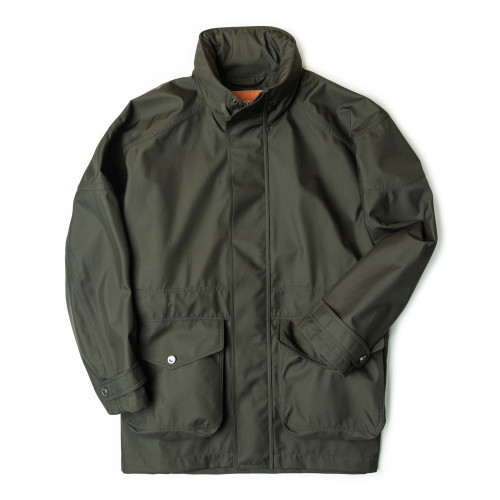