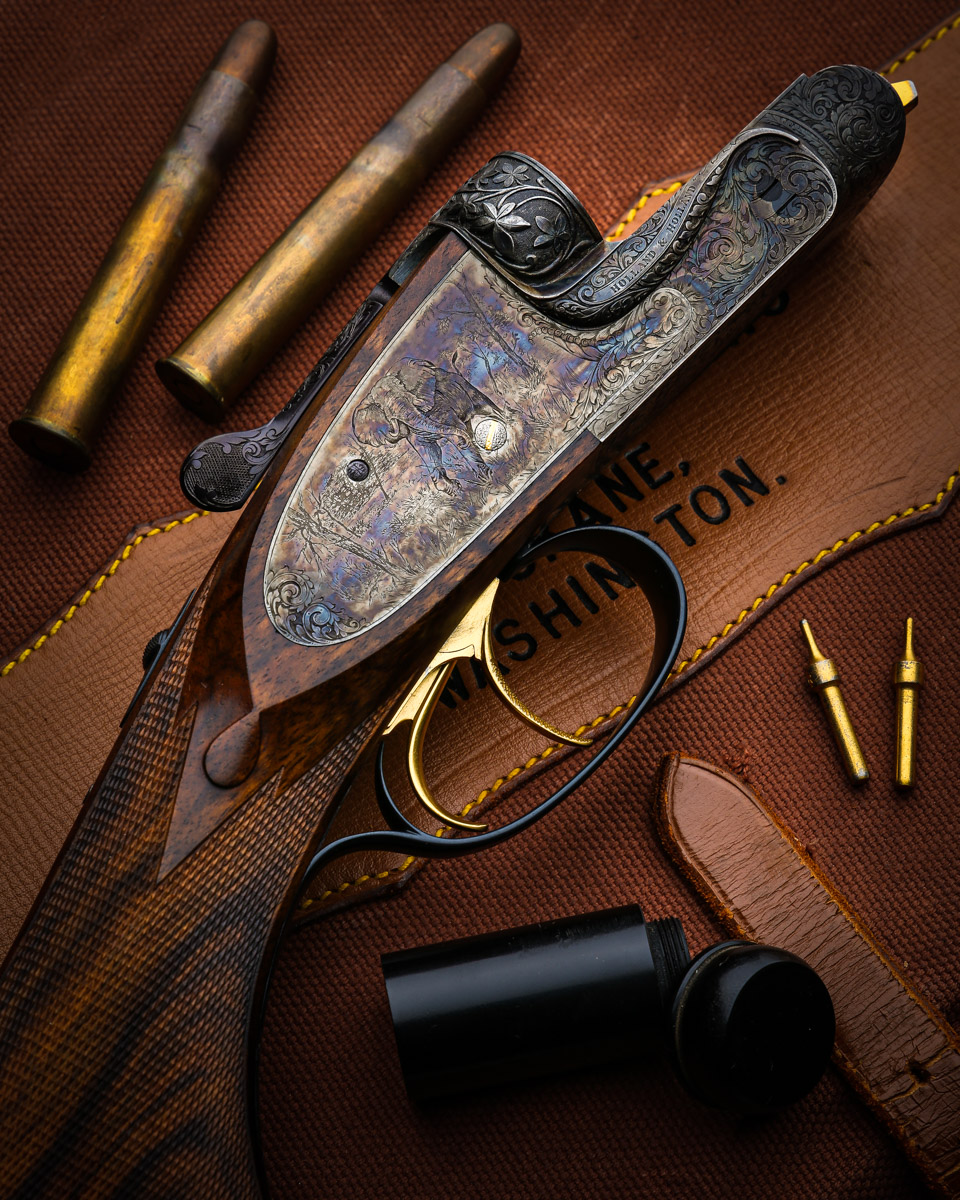 Just arrived at the U.S. Agency is one spectacular Holland & Holland .470 NE Model de Luxe double rifle. According to the factory ledgers, the rifle was completed in 1964 for a renowned hunter, firearms aficionado and very influential patron of the gun making trade, Mr. Donald S. Hopkins.

In one of my favorite books, White Hunters: The Golden Age of African Safaris by Brian Herne (John Macrae/Henry Holt & Co., 1999), which is a history of the safari tradition and influential hunters on the African continent, Mr. Hopkins is mentioned and best summed up. According to the passage, “Donald S. Hopkins of Spokane, WA…was a very wealthy man and co-developer on several different rifle cartridges known as the O.K.H. (e.g. the .333 O.K.H. Invented by Charles O'Neil, Elmer Keith and Don Hopkins). The first Hopkins safari was three months…hunts often lasted six months…he made a record eleven safaris averaging nine months apiece in search of an elephant (thought to be mythical by his hunters) with tusks weighing 150 pounds each.”.

Not only was Mr. Hopkins a passionate hunter but, judging by this rifle, he was also a very serious patron of the English gun making trade. The bespoke rifles he commissioned pop up from time to time and this must be one of the finest I have ever encountered.

Obviously, Mr. Hopkins pushed the makers to deliver the best that could be had, as this rifle features engraved game scenes of a quality and realism far beyond the norm for this vintage. Each game scene on this rifle is highly detailed and of excellent quality, even by today’s standards, but certainly when compared to the somewhat naïve engraving still prevalent at the time the rifle was made. As noted in the factory ledgers, this rifle was engraved by none other than Ken Hunt. 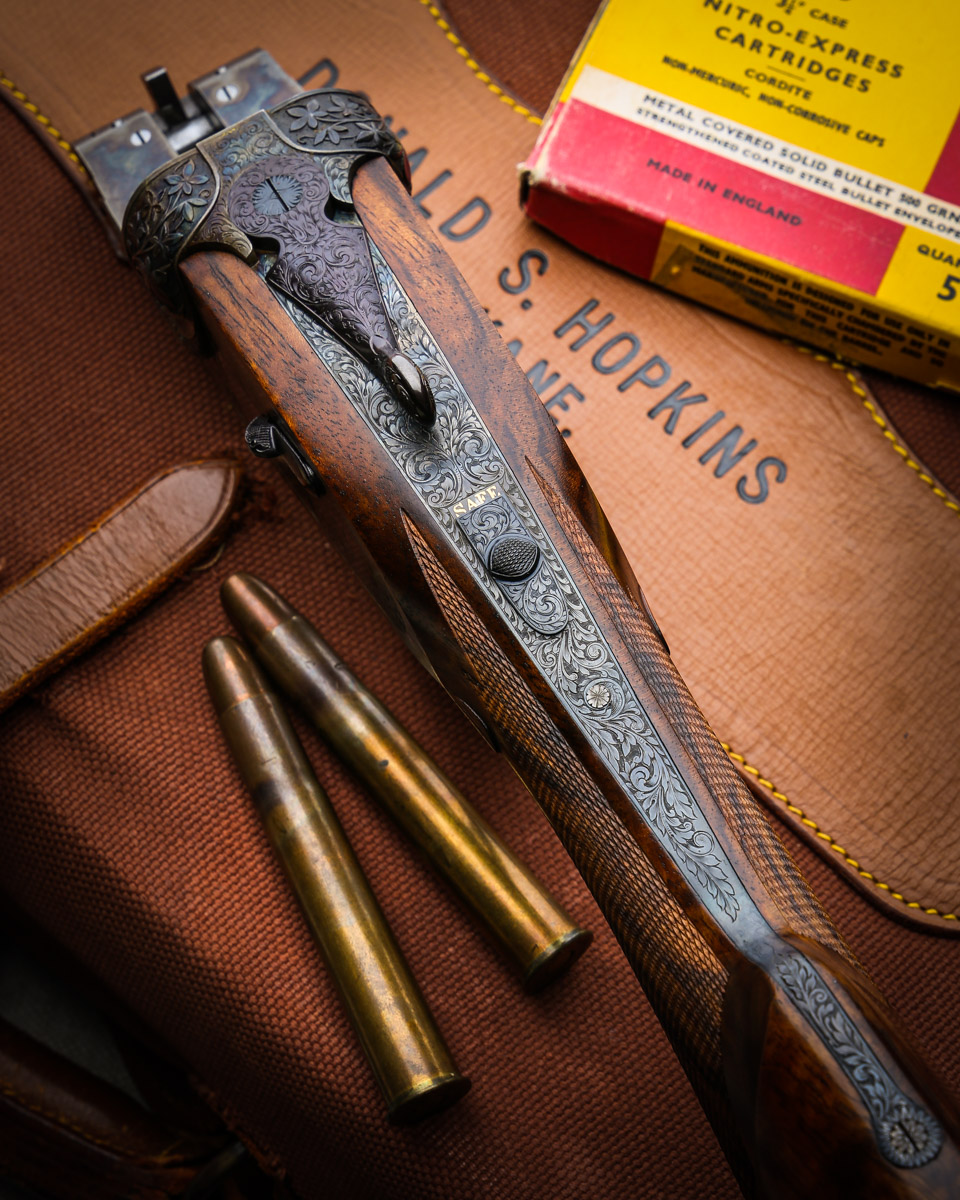 I have read that Mr. Hunt started his apprenticeship at Purdey’s in 1950, studying under the great Harry Kell, Jim Jones (formerly of Sumner’s workshop) and Bill Smith. Each man was a master of his respective type of engraving. For instance, Mr. Jones had been engraving small scroll and floral patterns since he was 13 years old and Mr. Smith was equally experienced and specialized in large scroll. Finally, there was Mr. Kell who specialized in-game scenes and carving and, in the view of many, is one of the father’s of modern engraving.

After World War II, there was a growing trend of fine guns and rifles becoming the canvas for high art engraving. Mr. Hunt learned his trade from these masters and, in turn, perfected the skills required to execute not only the standard house pattern scrolls developed around the turn of the 20th century but also the ability to engrave and carve steel with breathtaking realism.

Today, Mr. Hunt is widely viewed as one of the World’s finest engravers and he remains one of the last links between the old-world, standard “house” engraving and the modern role of engraving as an art form in and of itself.

A rifle that is not short on details, the color hardened lock plates are pinless, meaning the pins that hold the action’s parts to the plates do not show on the outside leaving the surface uncluttered for engraving. A fitting touch for such wonderful engraving. The highly detailed game scenes show running black rhino on the right side, a bull elephant bluffing a charge on the left and, in my opinion, what would become one of Ken Hunt’s signatures, the head of a lion with piercing eyes on the bottom of the action. The Maker’s name is engraved along the action bolsters and the balance of the receiver is engraved in a very well executed bold foliate scroll pattern true to Holland’s Model de Luxe motif of the pre-war era. Rounding out the engraving, the fences are carved in a vine and leaf pattern and each game scene vignette is signed “K.C. Hunt”.

The 25” chopper lump barrels have Holland’s hidden Treble Grip third fastener, and hand filed pattern quarter rib and front sight. There is a factory original pop-up “ghost ring” sight behind single folding leaf regulated at 100 yds along with a folding moon-sight on the front. 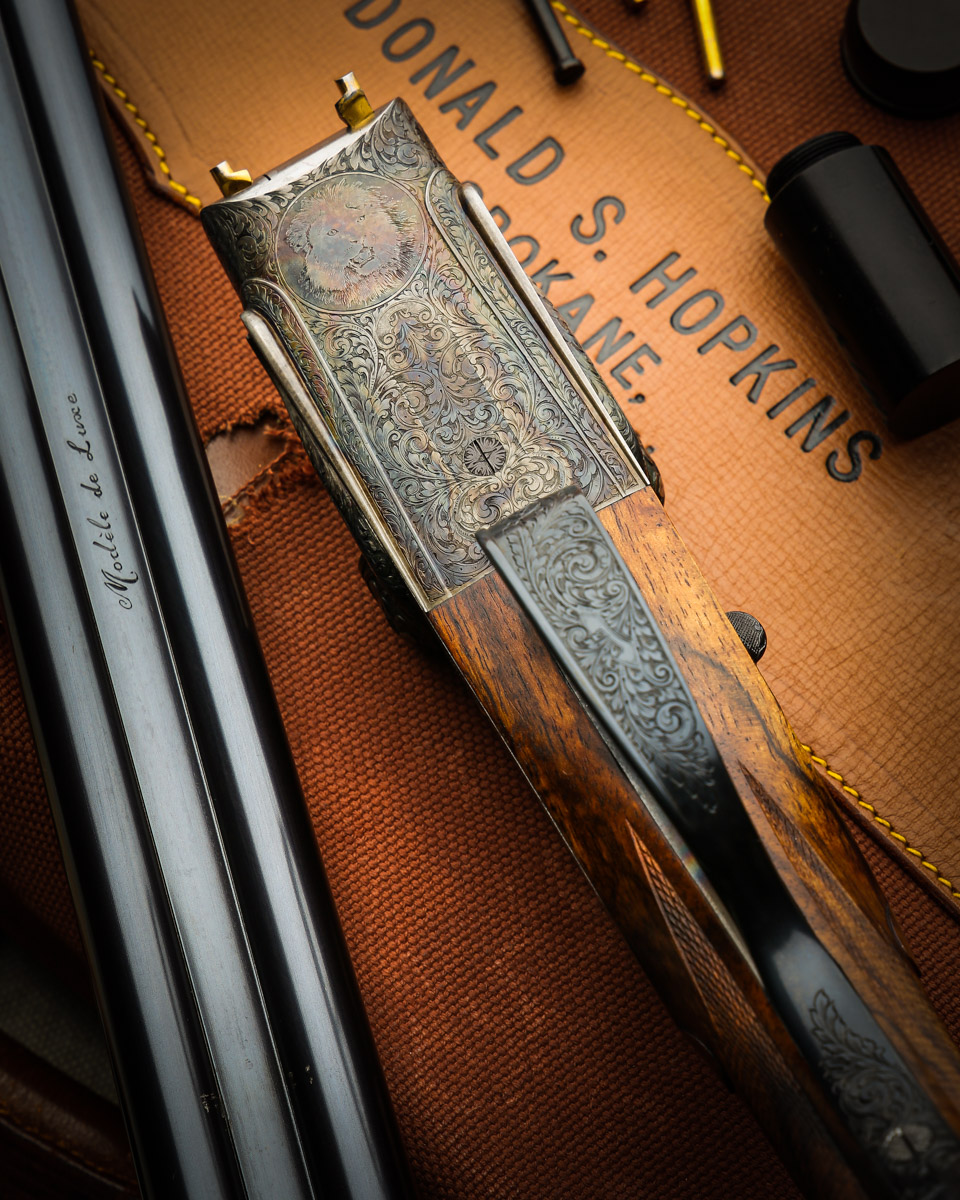 The highly figured walnut stock has a thin leather covered pad, right-hand beaded cheekpiece, traditional drop points, and a full pistol grip with a trap grip cap. The original owner’s initials are inlaid in the bottom of the stock in gold block letters. Again, another special feature noted in the ledgers is the rifle was sent to the U.S. to be checkered by Monty Kennedy who literally wrote the book on the subject, Checkering and Carving of Gunstocks (The Stackpole Co., 1952). Both the stock and semi-beavertail forearm are checkered in an exceedingly well-cut, and very fine point pattern.

The rifle is housed in its original Oak & Leather case and canvas and leather outer cover. Included in the case are the original gilded spare strikers and replacement pin for the detachable lock lever, all housed in a jar made of ebony. The interior of the case retains its original red baize lining, serial numbered charge card and a very rare trade label that Holland’s used for only 3 years (ca. 1960 – 1963). The outer cover’s initial patch reads: “Donald S. Hopkins Spokane, WA”.

The rifle remains in wonderful condition holding nearly all of its original stock finish, color hardening and barrel black.

Clearly, a man passionate about firearms and hunting, this rifle reflects the unrelenting standards and influence Mr. Hopkins had. It also illustrates part of the allure collectors feel to guns and rifles ordered by people of fame, influence and stature. It was customers like these who, more times than not, demanded and received very special care and this rifle is a prime example of what that could produce. 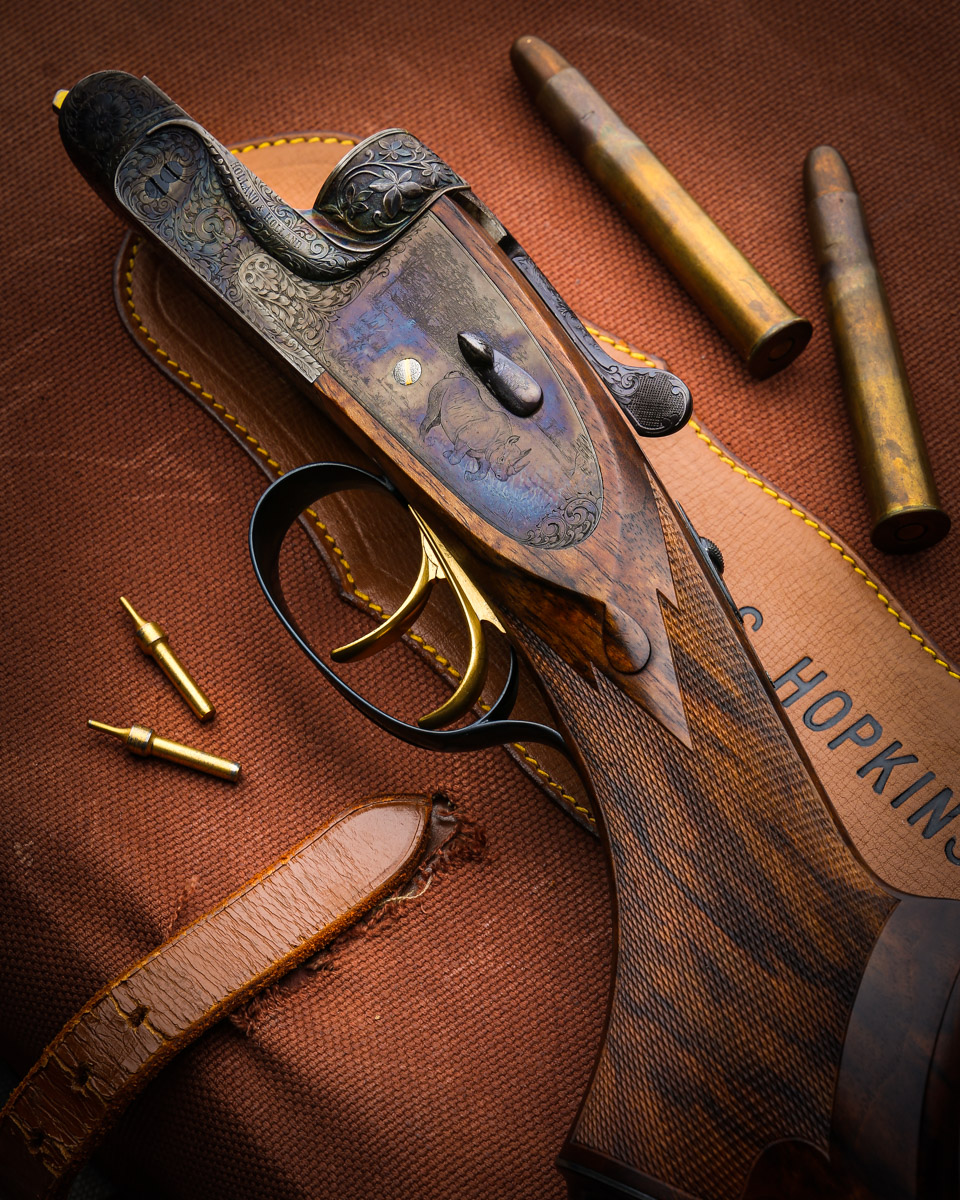