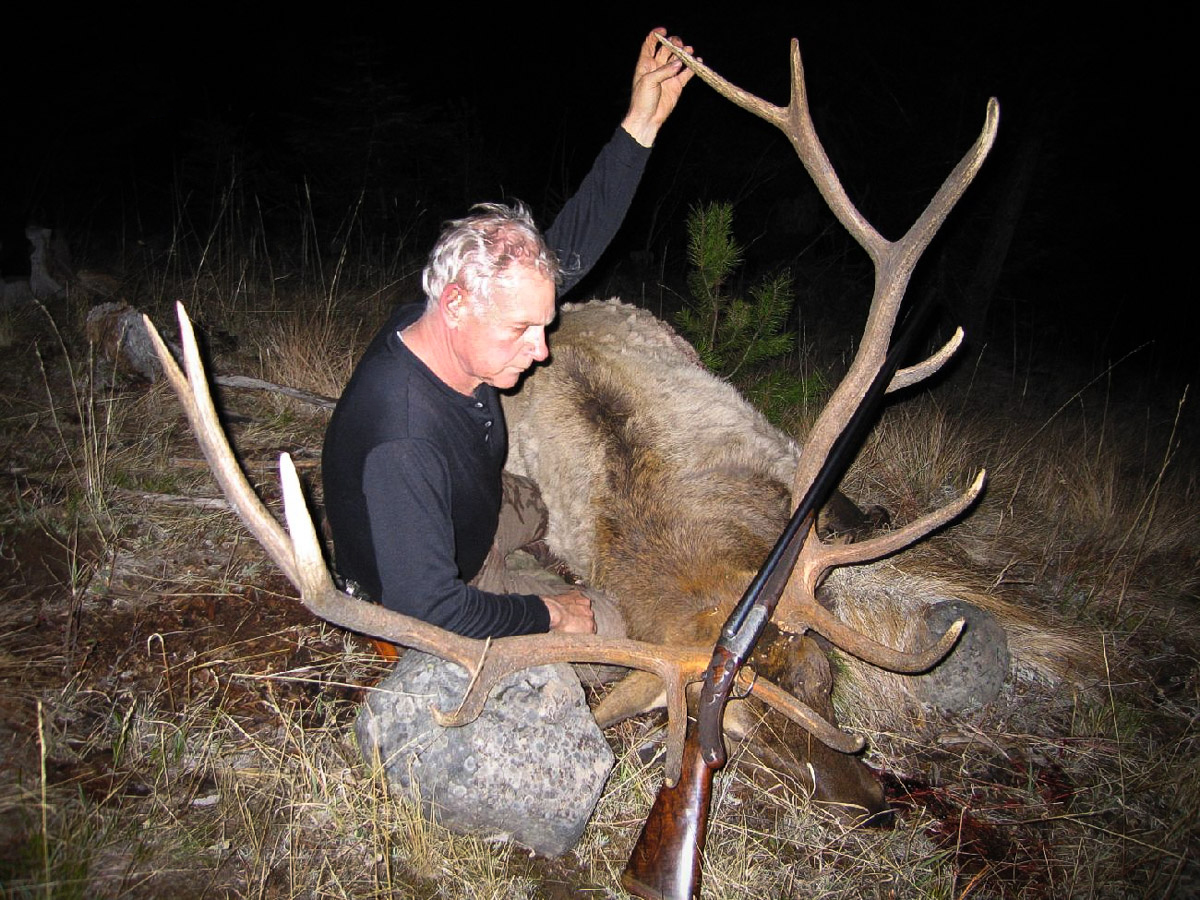 Farewell Simon - A Salute To 'The Explora'

It was a fine winter day, in the duck season. I had my pickup loaded with all things for an afternoon hunt. My Labrador, Miss Feather (Miss Duckhill Sheba’s Bournebrook Feathershower) had already occupied her place in the passenger’s seat for several hours as she always did on these days. I had worked through the never-easy task of selecting the gun and this one was well beyond ordinary. It was a Scott Premier 10 bore, with Damascus barrels. It was all done up in ducks as they often were, but this one was decorated with several odd and unusual species of sea ducks. I was almost out the door for the 1 ½ hour drive when I received word that Simon had gone to the other side.

My first reaction was not to go hunting, but then realized that was a very foolish notion, one that would disappoint him deeply. Instead, the day and the GUN would be a tribute. The Scott was befitting almost any occasion, but today it had to be a Westley and not just any Westley, but the finest one I knew. One only has to witness the title of these pages to know Simon valued Exploras and I value them as well. In fact I see them as the most complete and sophisticated firearms ever made. The gun today would be “The Queen of Birmingham” a Deluxe Explora and the most wonderful Explora and Westley I have ever met.

It came to me in a rather unusual way; out of an auction. I saw the gun, held it and crushing-love at first sight would be an understatement. It was glorious and essentially new... and I knew I could not afford it. A mutual friend liked the gun equally, but he had something I did not, an invincible purse. He told me simply to bid and buy the gun. If in the end I could afford the hammer price I could have it, if not I was to continue and buy it for him. I wrote a number, my very last number, down before the bidding began. The hammer fell on that number. 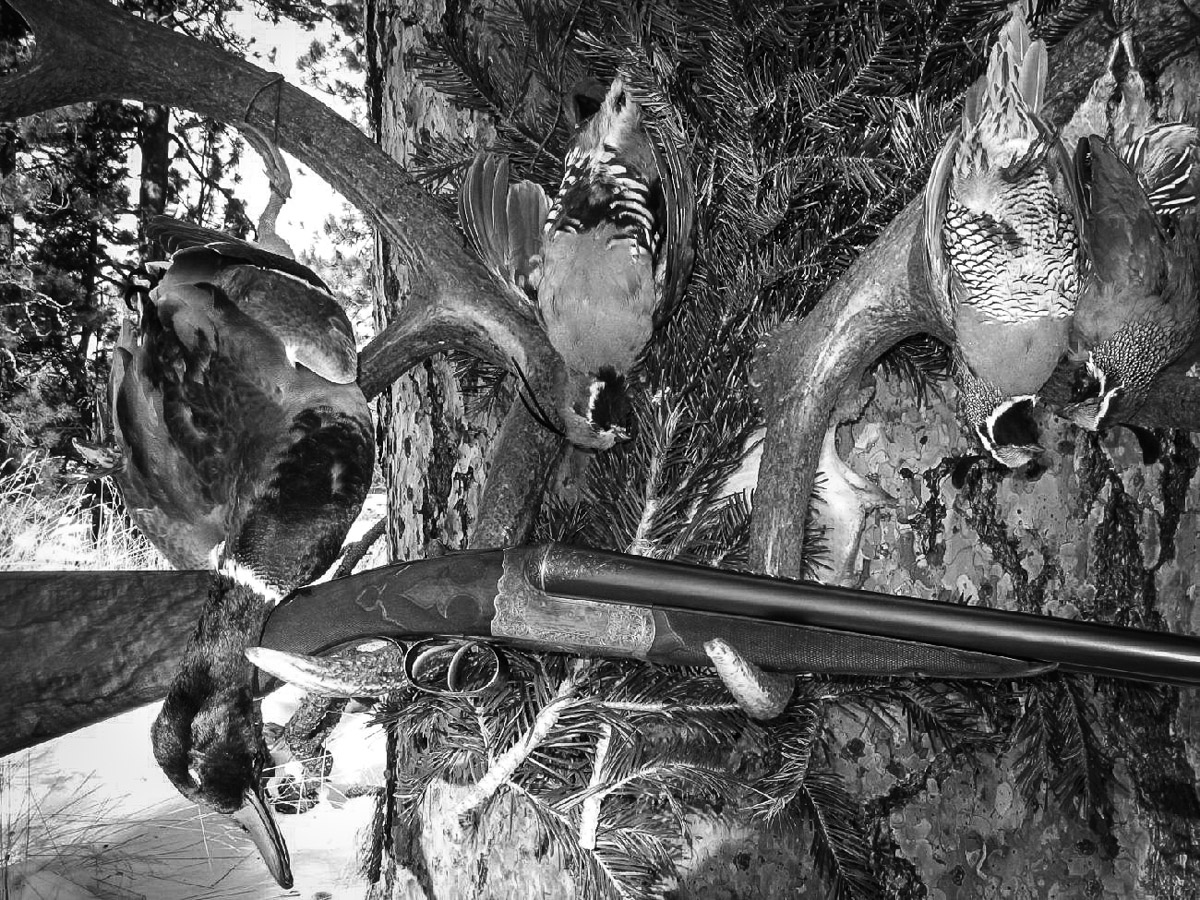 With it I began to perfect Explora ammunition, ammunition that would be ballistically identical to that which the great Leslie B Taylor had created. I used a ballistic technique similar to the originals to get 735 grains (1 ¾ ounces) to go 1250 fps at normal shot gun pressure. Then I developed bullets that would fly like the L.T. Capped originals. In the end I had a cartridge driving bullets that would fly exactly to those glorious sights, each and every one of them, all the way to 300 yards; and be deadly when they arrived.

The Queen performed wonderfully as a shot gun; taking valley quail, rare mountain quail, and ducks with perfection. Its crowning moment came late one autumn afternoon in the Sheep Creek Valley. The great yellow 6 x 6 bull elk walked out of the thick young timber into a room-sized open meadow and stood broad side. I was sitting with The Queen on my knees and made my best estimate of 250 yards and turned up that leaf. I looked at those massive shoulders over the sights, sights that were strangely rock solid and crystal clear. My son was beside me and I whispered, “250 yards????”... “Yes, very close”, was his reply. I pressed the front trigger. The big bullet arced across the valley and landed with a mighty “wok” as the bull lurch into the black timber. We listened, for there was nothing to see and suddenly there was a huge fir-rending crash in the timber, followed seconds later by another when the big bull slid out into a little clearing. The bullet struck the top of the front sight with laser precision, dead center and completely through both of his shoulders. She is a very, very special Westley. 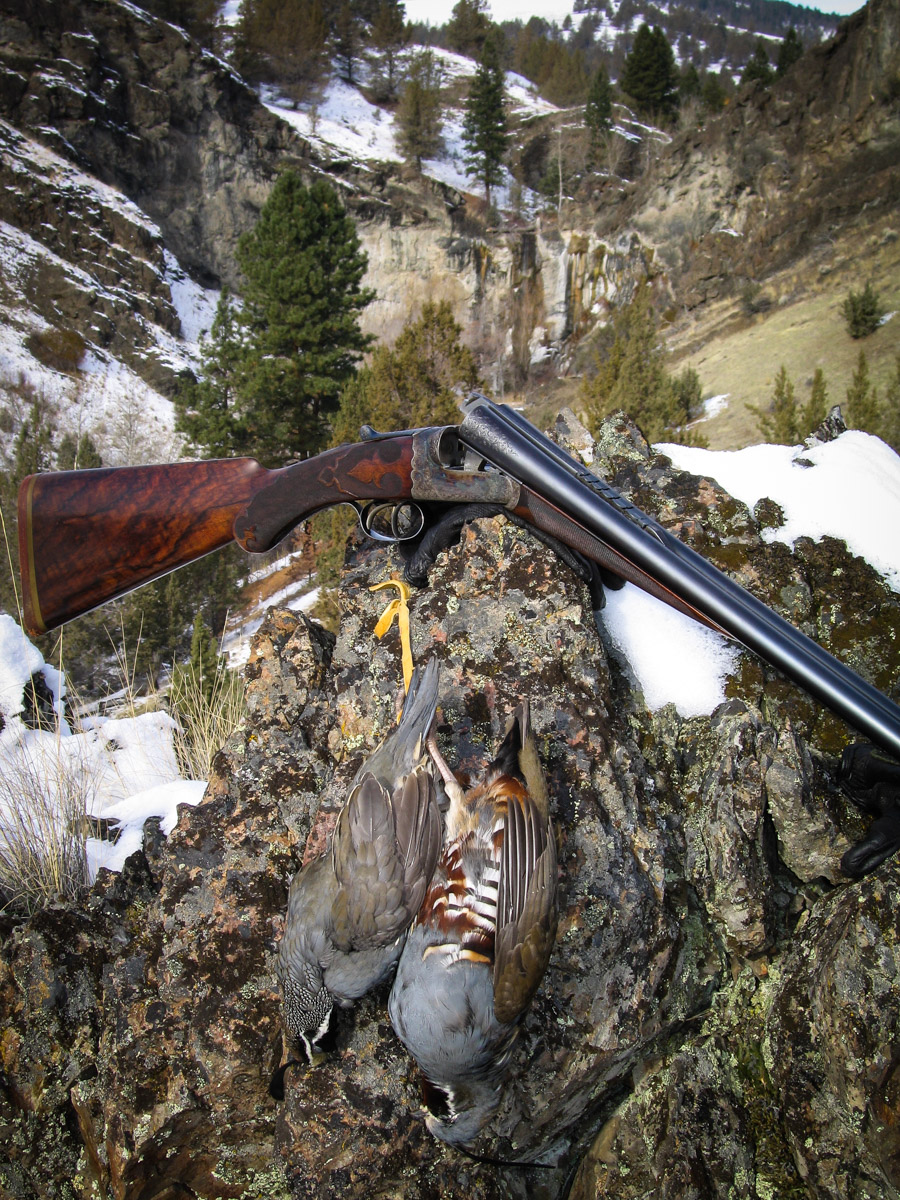 I thought back on these things as we watched the sky over the pretty little pond. It was a still cold, a day without ducks. And then he came, the loan magnificent mallard drake with the most brilliant orange feet I have ever seen. He circled twice and levelled across the far side of the decoys; at 40 yards... almost too far for an Explora barrel. The same right barrel spoke and he folded; the only duck we saw that day. Feather broke ice to retrieve him. To me there was a perfection about it all. 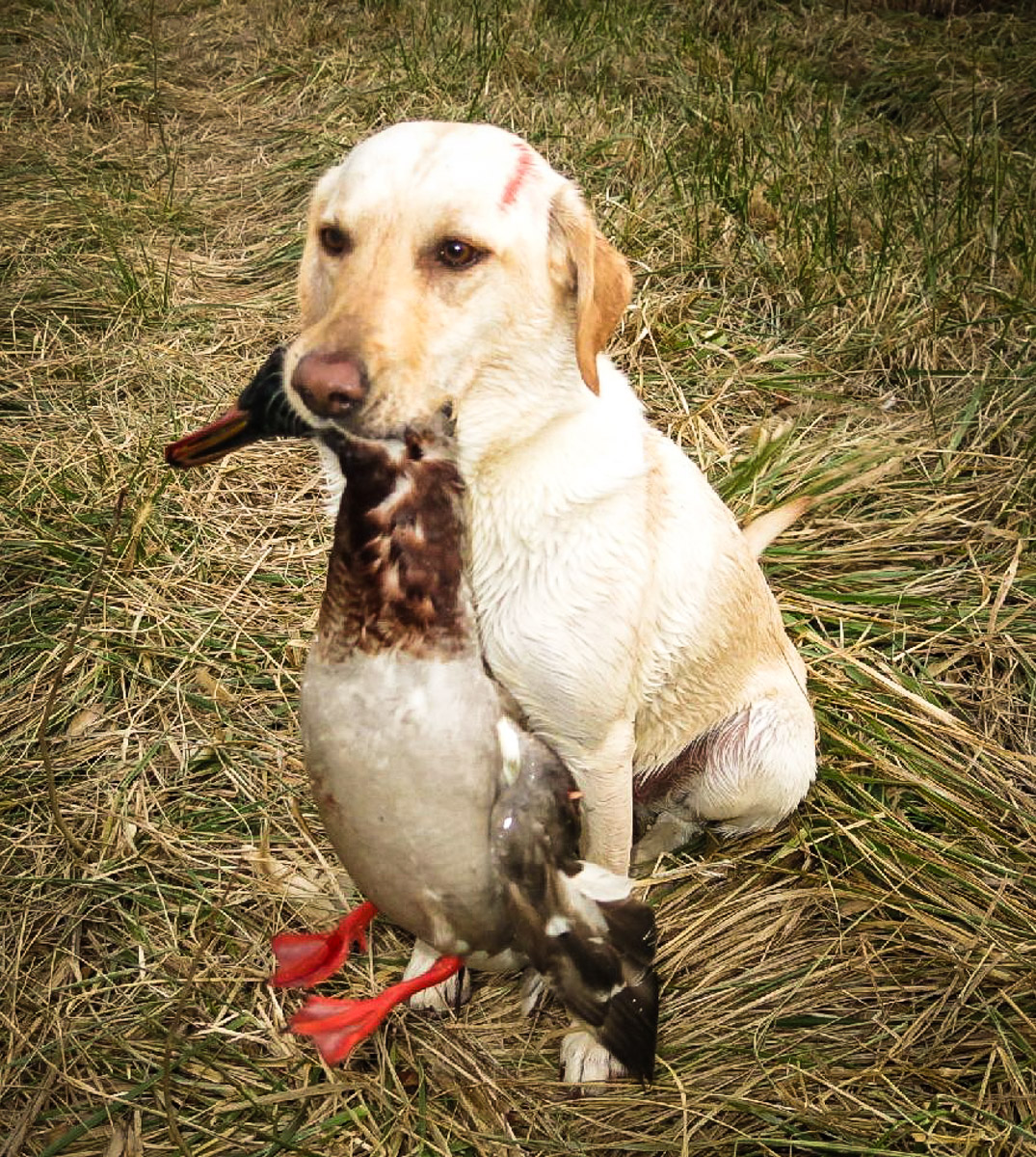 It may seem odd that I waited so long to write this, but it took me time to heal and find the courage to fully address the loss of this wonderful man. While he was a bastion of the trade and a truly passionate gun person I think I miss that dry humour and wit most of all. Some time ago I addressed my Selvyt Pad and Tin for preserving the Westley Detachable locks in these pages. When he received this he feigned being stricken and stunned. He thought he had the only tin and I had poached in this sacred space. But then in virtually his last notes to me, he won the day as always, “Well only real Westley men have a tin”!

He does not know this yet, but a Hundred Pounder is making those tracks he is following. 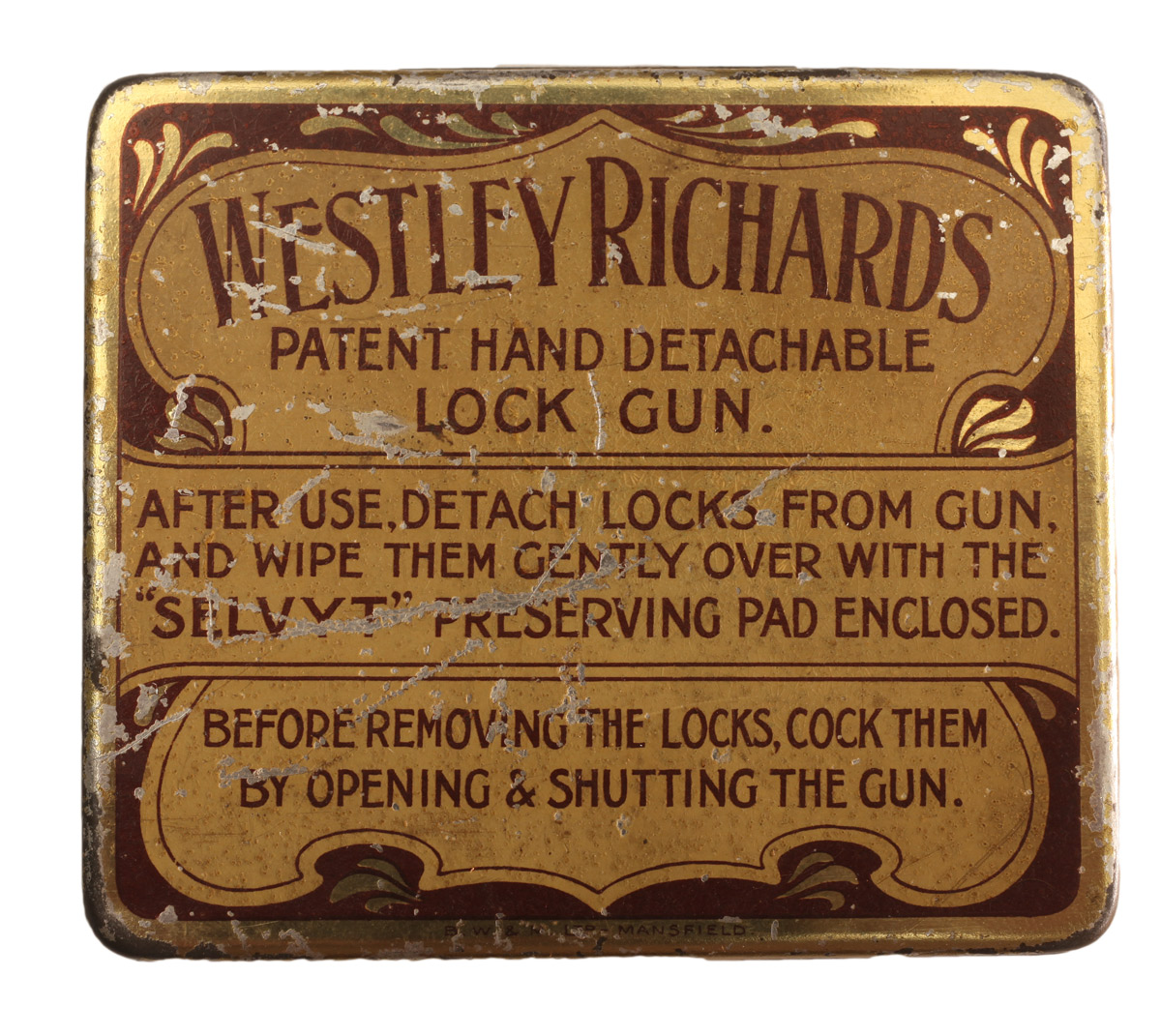