What constitutes a best English game gun? Peddlers of conventional wisdom today might claim it to be a single-trigger, sidelock ejector, stocked to the fences. There is really no justification for the claim beyond mere observation of the features adopted by most 20th century gun makers.

A gun can have all the features listed above and still not be a best gun. Conversely, it may have none of them and still be best gun. Practically, it is easy to argue for, or against, several of them. Single triggers are a matter of choice. They offer a quicker second shot, theoretically. Westley Richards has a letter from famed elephant hunter James Sutherland attesting to the efficacy of the single trigger on his .577 double rifle.

Double-tapping an elephant as soon as recoil has dissipated may be one thing but taking second shot at a bird in flight requires a little more time to swing and stay on target, or acquire a second target, attempting a 'right and left'. This generally takes more time than it requires to locate and pull a second trigger. So, the advantage of a single trigger on a game gun may be moot. Unless, of course the operator is one of those people who can drive a car with a  stick-shift, perhaps even fly a helicopter but claims to be incapable of remembering to slide his finger to the rear trigger for a second shot! 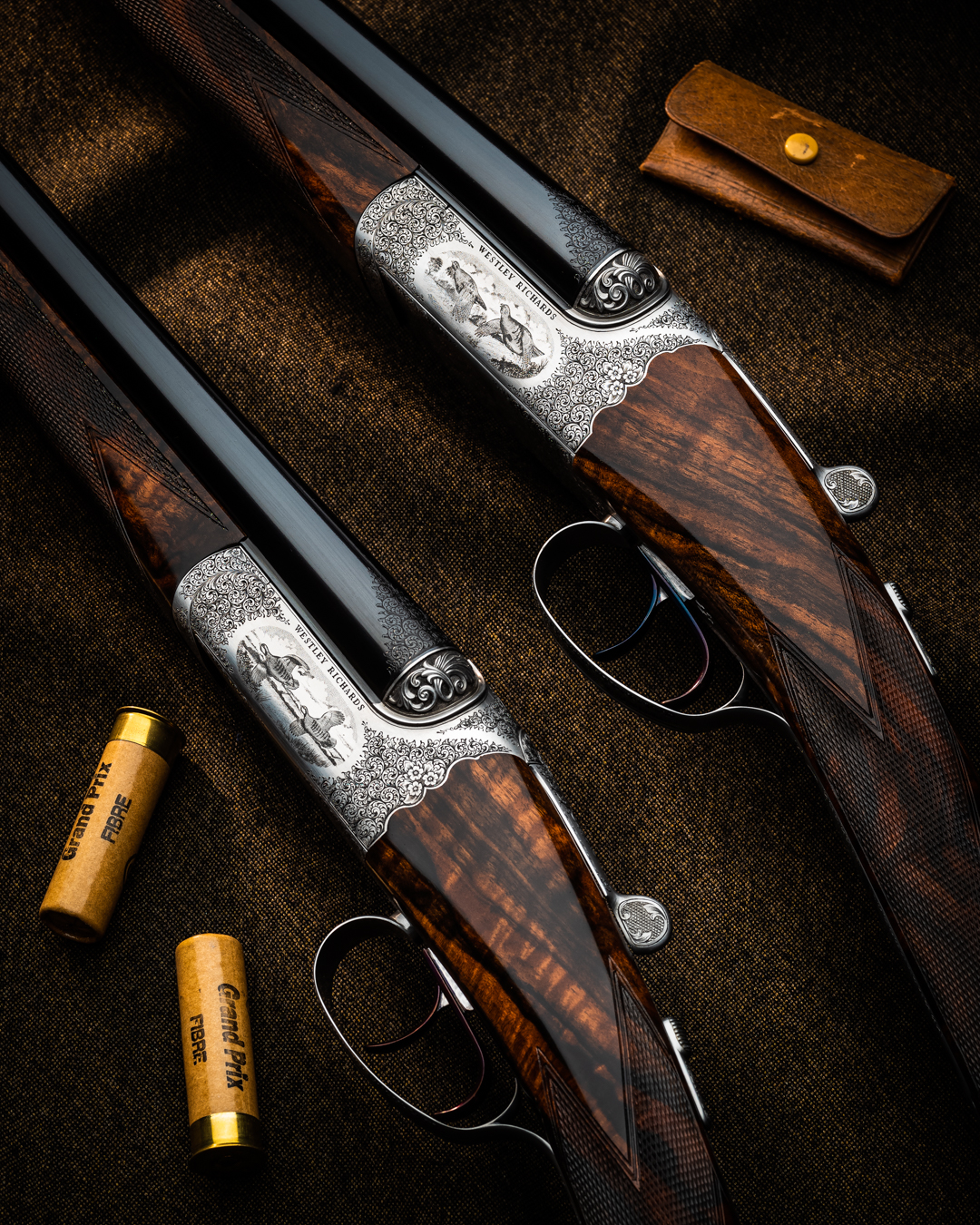 A better case can be made for ejectors. They certainly take the faff out of the re-loading cycle and on driven game shoot, that is quite important. In the early years of ejector patents, they proliferated and many of the designs made were neither reliable nor robust. However, today, the systems best known and trusted are long out of patent protection and are available to anyone who cares to use them.

The last two features are more contentious. First, the idea that all best sidelocks have to be stocked to the fences is nonsense. True, all those currently made in Britain are. However, take a look at a Boss from the 1890s and try to explain what isn't 'best' about it, or for that matter, a Rigby. The stocked to the fences style has become the preference but it is an issue of the look, not the quality or efficiency of the gun.

Now we have the peripherals out of the way, what of the central plan of the gun: boxlock or sidelock? Different firms cemented their reputations with different guns. Interestingly, over a hundred years later, those still extant are offering their best guns on the auctions on which they grew famous. Purdey build the Beesley patent self-opening sidelock, Holland & Holland build their 1922 patent 'Royal' sidelock with self-opening system, Rigby has their Bissell patent 'Rising Bite' sidelock and Westley Richards the Anson & Deeley fixed lock and Deeley & Taylor hand-detachable 'drop-lock'. Dickson builds the 1880 trigger plate gun and Boss sidelocks are as they were in 1910. All are built as game guns of 'best' quality. 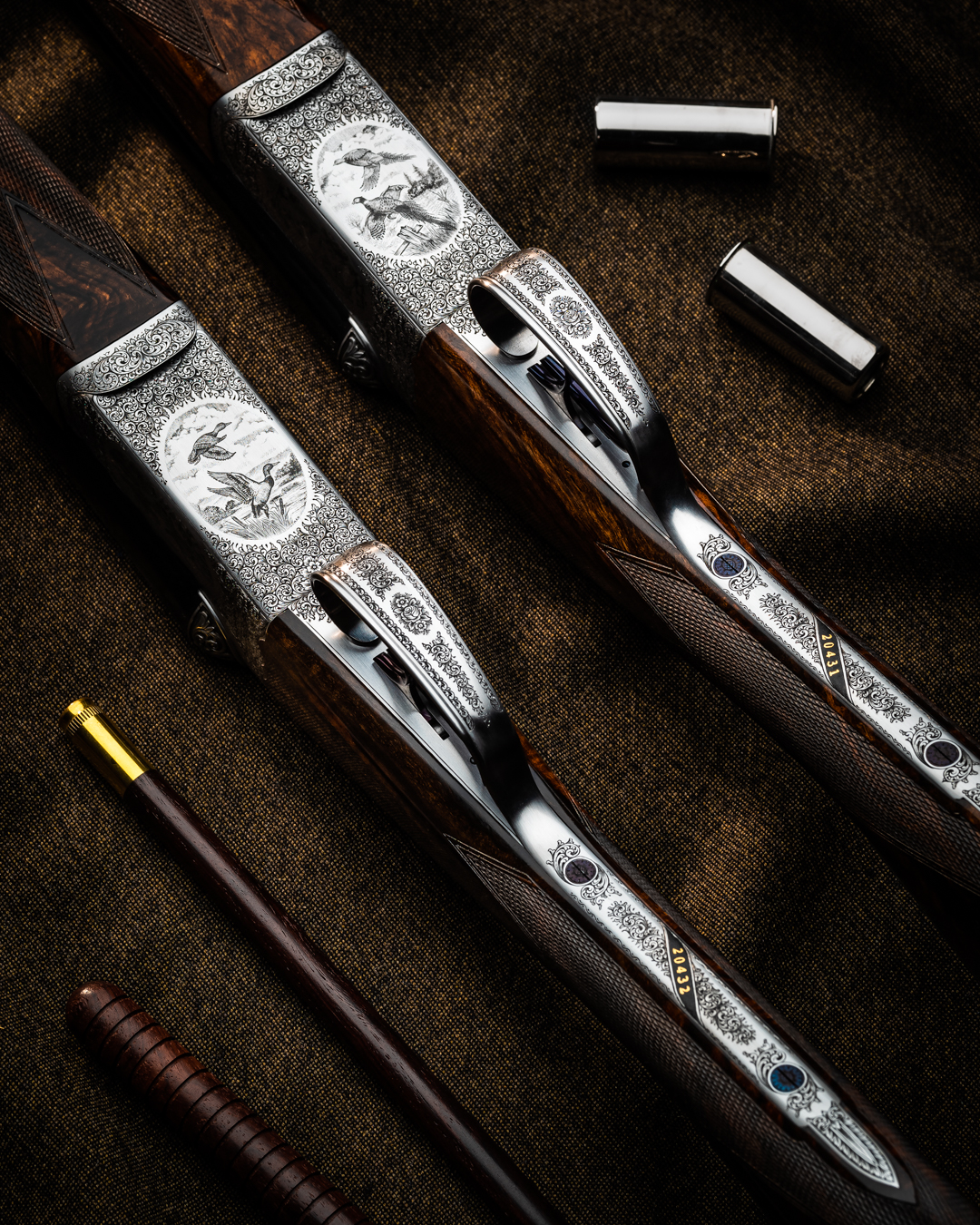 Here we can see a new pair of Westley Richards 20-bore game guns, built on the Deeley & Taylor patent with locks that can be removed by hand, via the hinged bottom plate.

The great gun reviewers of the 19th and early 20th century used a great deal of ink comparing the merits of sidelock, trigger plate and boxlock actions. The major advantages of the Westley Richards designs are; their simplicity, their few moving parts and the strength of each limb. There is very little to go wrong and no weak spots where material failure is prone to occur.  With fewer inter-connecting parts, they are also less frequently in need of regulation or service.

The 1875 boxlock patent was revolutionary and many best boxlocks were built here before the 'London Pattern' sidelocks emerged, in the early to mid-1880s.

The success of the boxlock was also its undoing. So widely was it adopted and so good was it, even when made in medium and lower quality, that it became commonplace. In circles where exclusivity is currency, the more expensive (and fiddly to build) sidelocks became the norm, while boxlocks conquered the world in the hands of the explorer, the adventurer and the colonist. At home boxlocks became the game guns of the middle and lower middle classes and the tools for the working class. 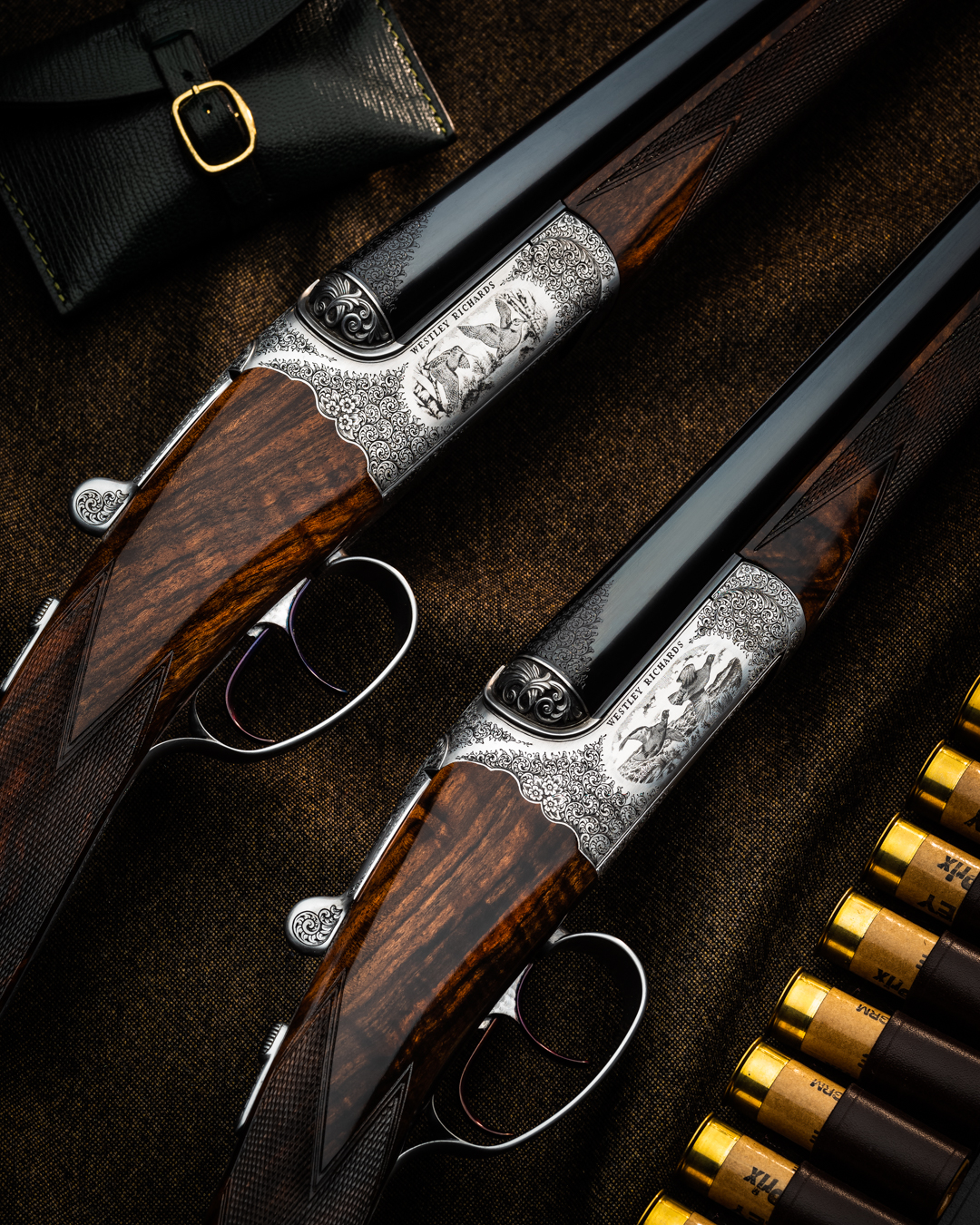 However, Westley Richards always built boxlocks and drop-locks to the very highest standards; 'best' and 'Modele de-Luxe'. Today we still do. The pair of guns in the photographs here attest to the fact. They were commissioned as 'de-Luxe' game guns, in 2018, with an English theme. As such, they are very traditional in form and style.

They feature the 'Model C' doll's head and sliding top-lever, hand-detachable locks and double triggers. Engraving is traditional Westley Richards scroll and game scenes. Being for the British market, the birds depicted are grouse, pheasant, woodcock, mallard and partridge. 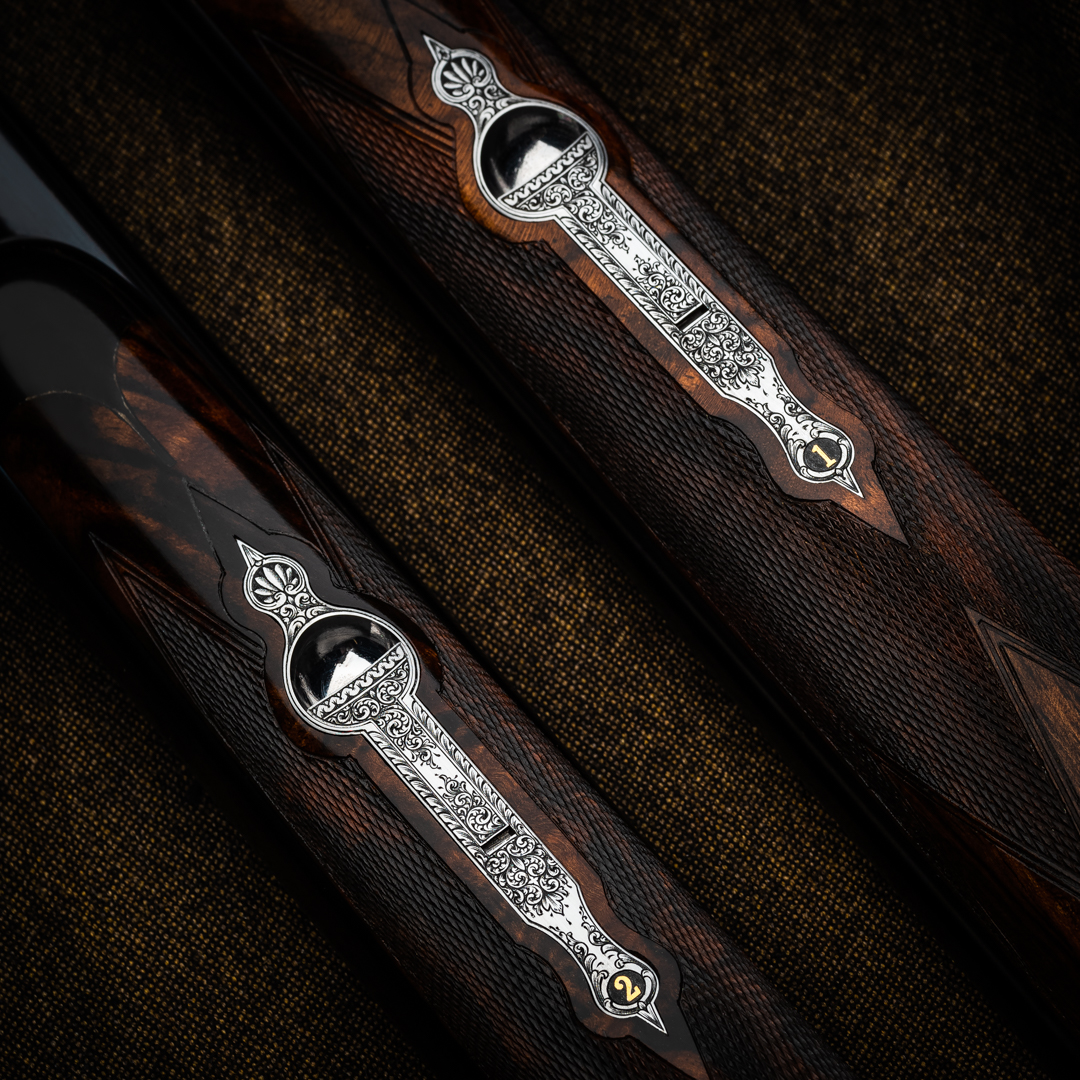 The actions have what the Birmingham trade has always called 'fancy backs', the Westley Richards 'scroll back' version of which features an elegant bow shape, with walnut fitted to the metal seamlessly, along this graceful border.

For contrast, the fences are carved and the scroll is again picked-up on the breech ends of the barrels. The finish is bright, rather than colour case-hardened, in order to better show-off the game scenes.

The success of a pair of guns looking like they belong together often depends on the choice of walnut blanks used for stocking. Here, they complement one another perfectly. The straight grain in the head of these locks continues through the hand and, once it reaches the nose of the comb, the contrasting black lines and rich amber highlights flow into the toe, in a pleasing flow that draws the eye. Fine chequer and perfect proportion ensure a classic English look. Many continental guns attempting the 'English style' get the butt shape wrong, with too small a butt sole and too fat a belly. 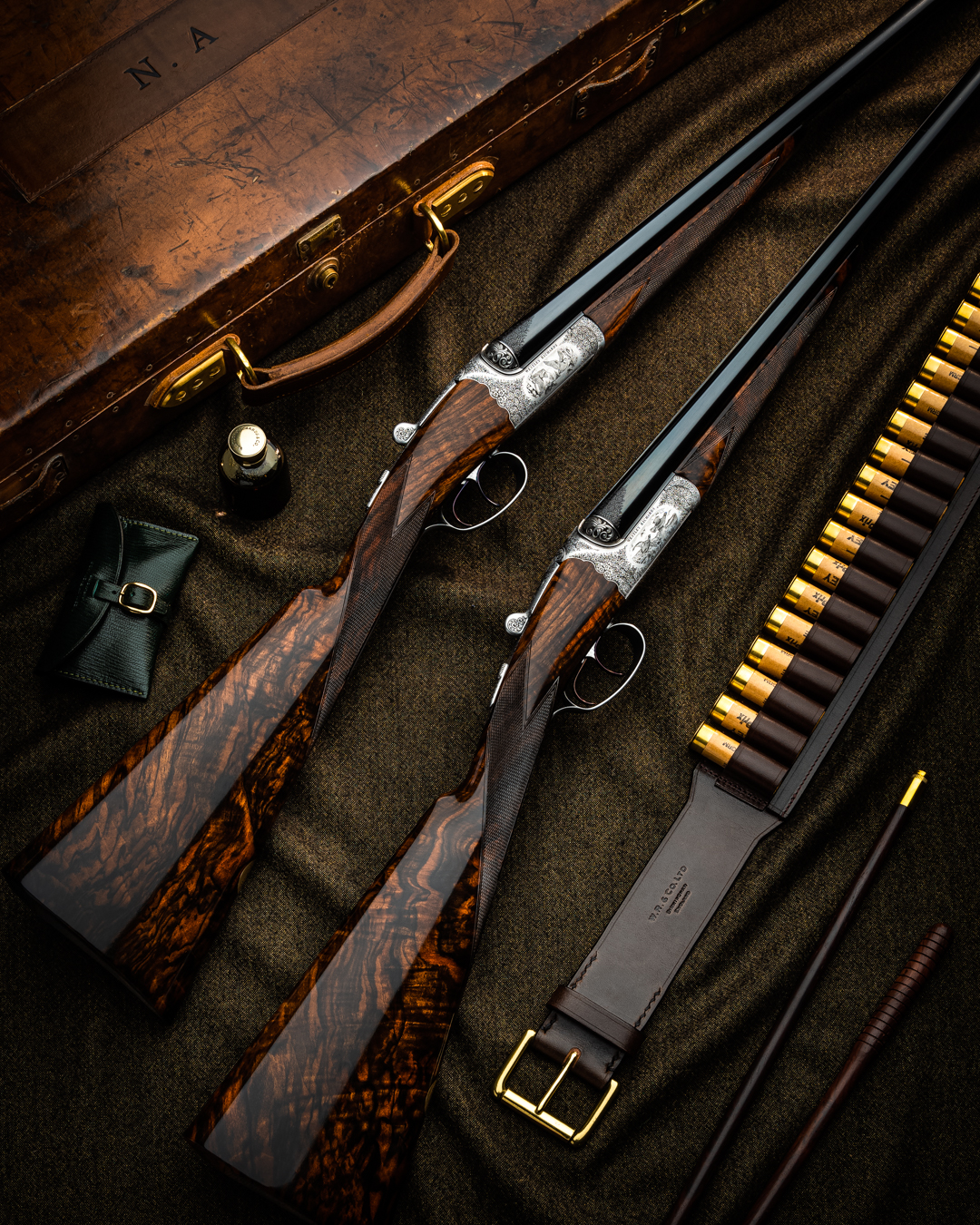 The layout of the engraving has its roots in our guns of the past, dense, fine,  foliate scrolls surround ovals of open space , then filled with scenes of quarry in their natural surroundings. For this commission, we employed the talents of two engravers, John Farman executed the scrolls, in which he has neatly incorporated some subtle rose bouquets. The game scenes are the work of Marcus Hunt.

The gun numbers '1' and ''2' are inlaid in gold in ribs and forends. These are removed by way of Deeley & Edge patent catches, a system we have been using since 1883. Barrels are best chopper-lumps and 29" in length, which is ideal for an all-round 20-bore. Chambers are for 2 3/4" cartridges and the barrels are choked Half and Three-quarters. 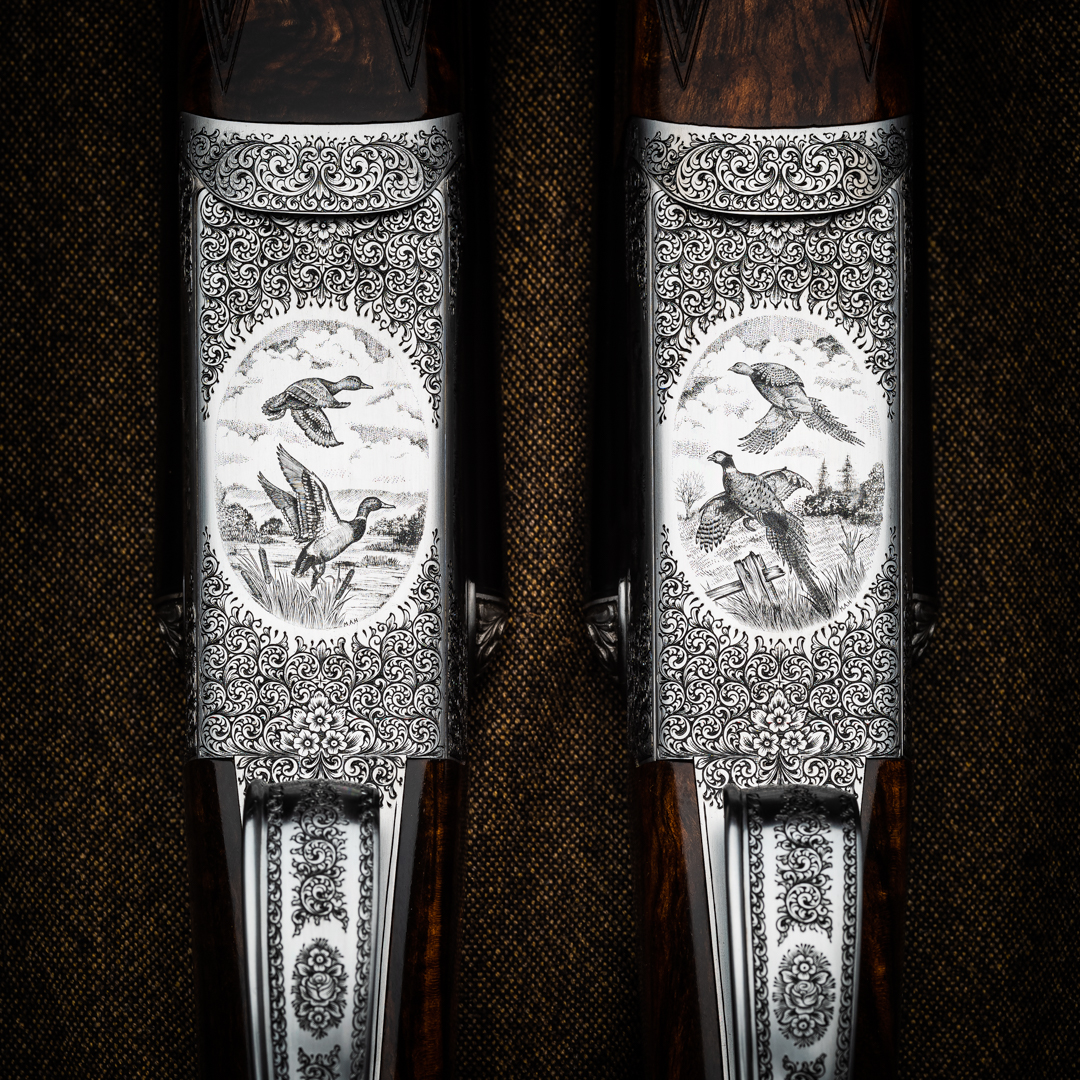 The guns can be seen below, fitted into a period oak and leather case, of a style unique to Westley Richards, with vintage trade labels. The case has been re-blocked, re-lined and fitted with two pairs of snap caps and a glass oil bottle. 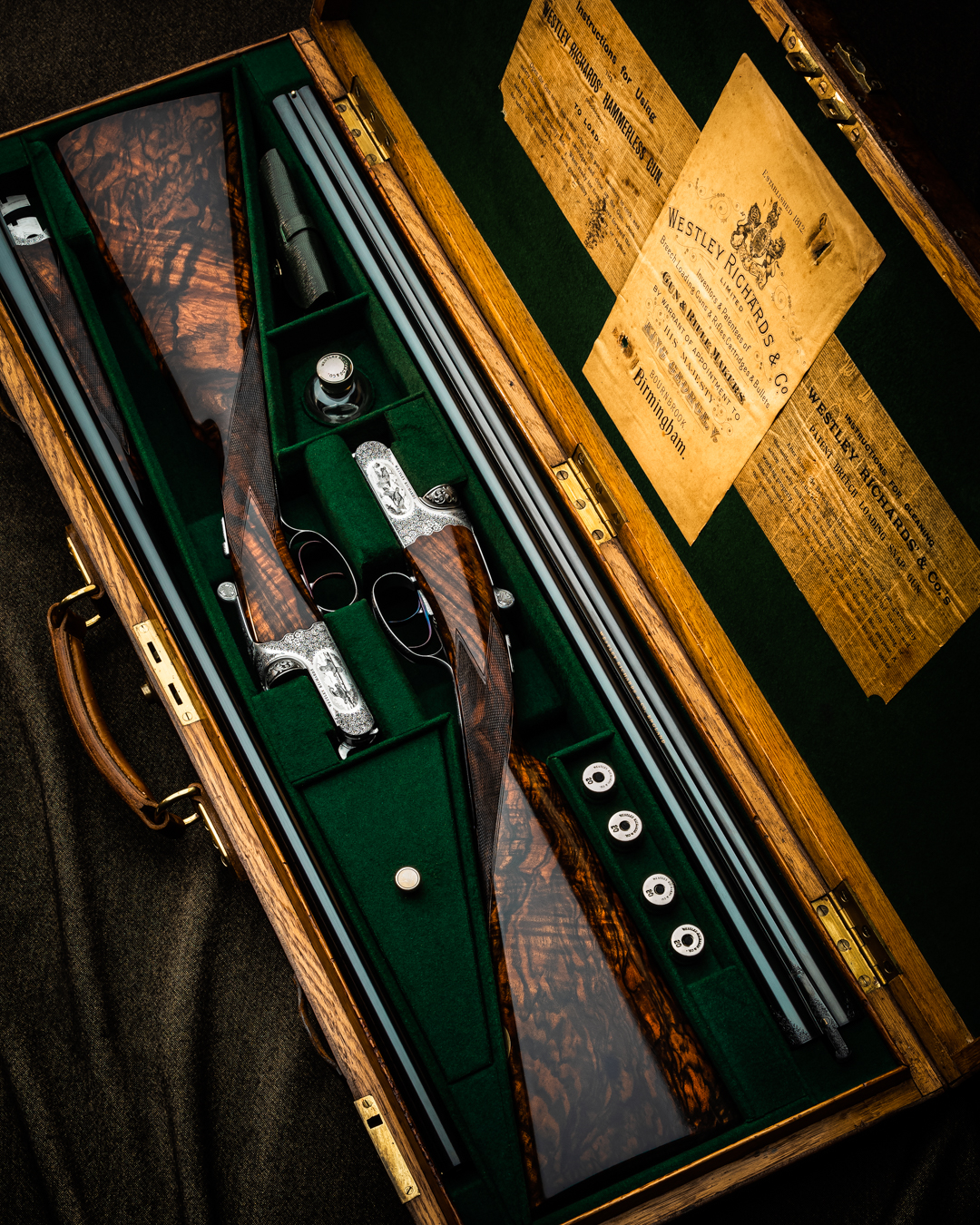