‘Stutzen’ in German, if you look it up, is (rather unhelpfully) listed as a verb meaning ‘to prevent from falling down by pushing from below or the sides’. Yet, in the Austrian Army, the term was apparently in use during the first quarter of the twentieth century to describe the short-barreled, stocked-to-the-muzzle Mannlicher 8mm carbines that were issued to artillerymen and engineers.

Since then, the term has come to be used in the world of sporting rifles to denote a (usually) short barreled, fully-stocked hunting rifle, typically used for woodland stalking and most familiarly sold in the British market by Steyr, using the Mannlicher action, perhaps most famously with the Schoenauer rotary magazine. 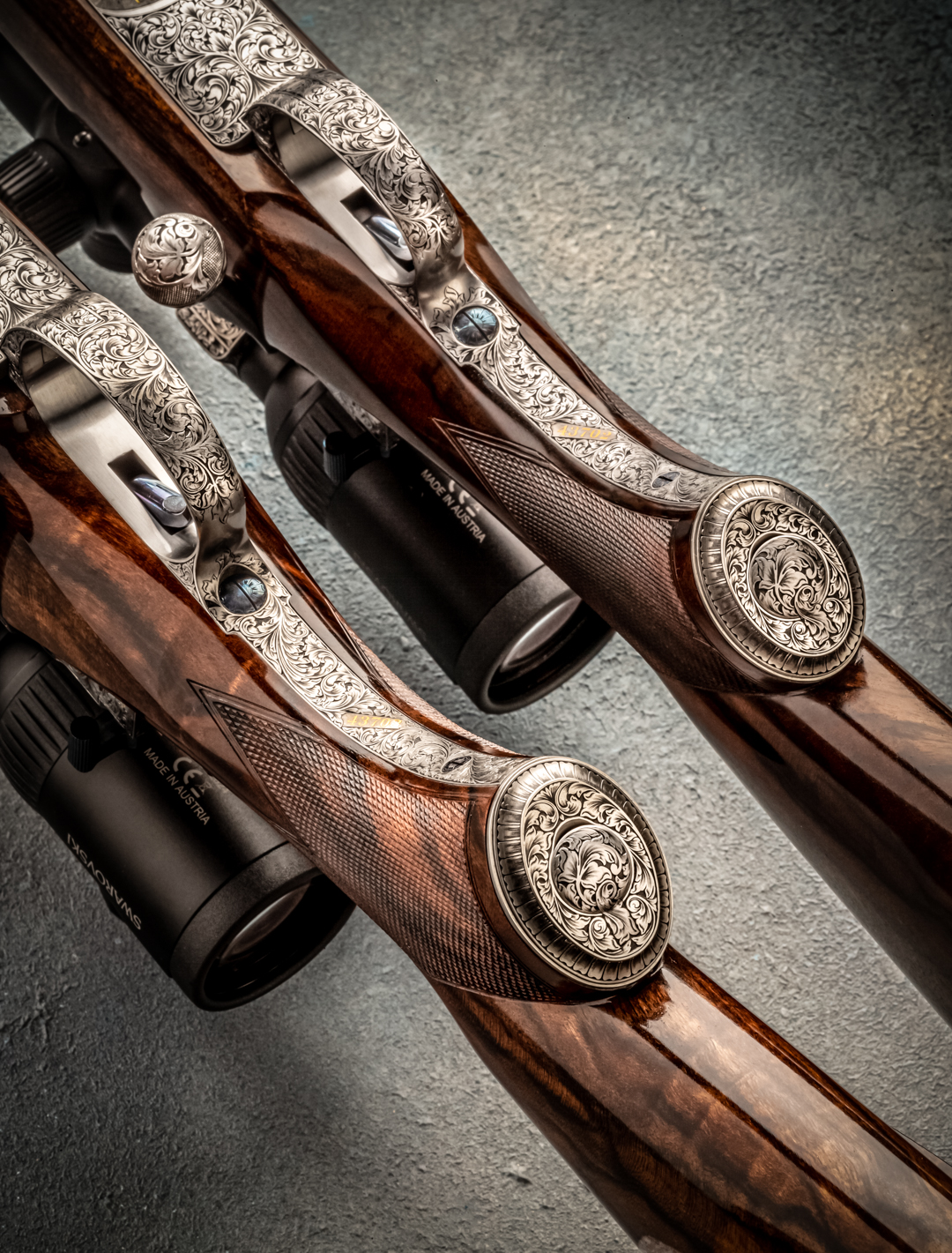 These were sold by most big British gunmakers (including Westley Richards) prior to the Second World War and for many here the term ‘Mannlicher’ became synonymous or interchangeable with ‘stutzen’ to mean any short, stocked-to-the-muzzle rifle.

They were generally continental in origin and of small to medium calibre; the .375 Express (9.5 M-S) being the biggest round in common usage.

Mannlicher rifles continue to be offered as stutzens and BSA, Mauser, Remington and several other firms have made similar models in the last sixty years. BSA even made a stutzen version of the Airsporter air rifle.

The style remains unusual for bespoke, best, British rifles and it differs significantly from the traditional form that most home-grown stalking rifles take. 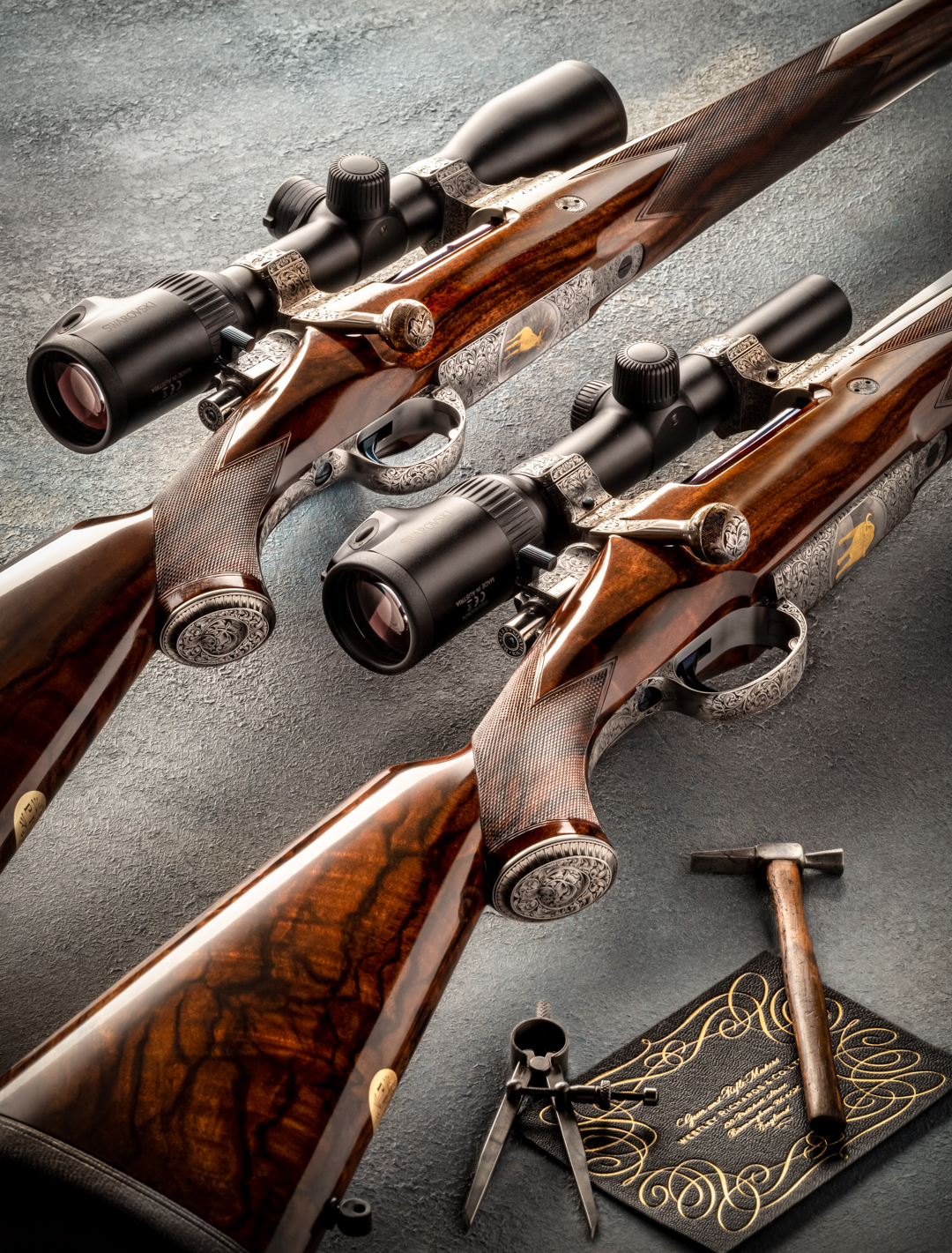 A customer approached us with an order to make a pair of stutzen rifles identical in structure and style but each in a different calibre. The first was to be in .300 Winchester Magnum and the second in .416 Rigby.

Both are built on new, English, double-square-bridge Mauser actions.

The engraving style for the rifles is almost mirrored from one to the next and consists of deluxe scroll with gold names and lettering throughout. The gold detailing carries on to the breech and muzzle lines and the ‘SAFE’ lettering and arrow on the bolt. The brief has been executed to perfection by Allan Portsmouth. 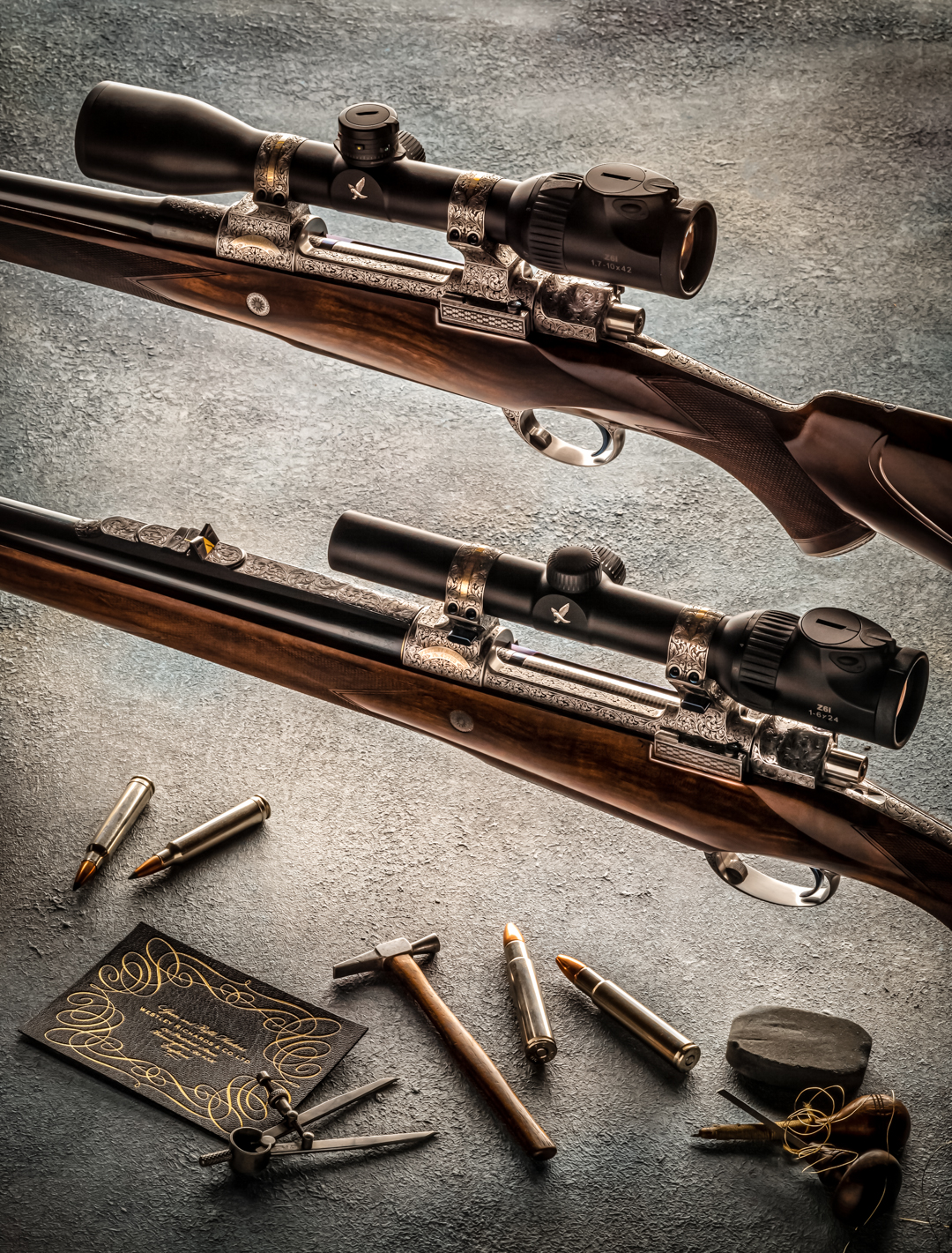 The magazine floor plate is gold-inlaid with a game animal, surrounded by scrolls. The .416 depicts a cape buffalo, while the .300 Win. Mag. has a kudu in the same place.

The two cartridges are very different and the rifles needed to be carefully constructed in order to house them effectively. The .416 Rigby (serial number 43703) weighs 10lbs 8oz without the ‘scope attached. The weight helps it to absorb the, otherwise fierce, recoil.

The stock, where it extends to the muzzle cap has to be sufficiently thick to withstand the repeated shock of recoil and of the daily movement of a heavy rifle. To that end it is significantly larger than the .300 Win Mag.

The extended wood provides a good, solid section at any grip-point for securing with the front hand when firing. 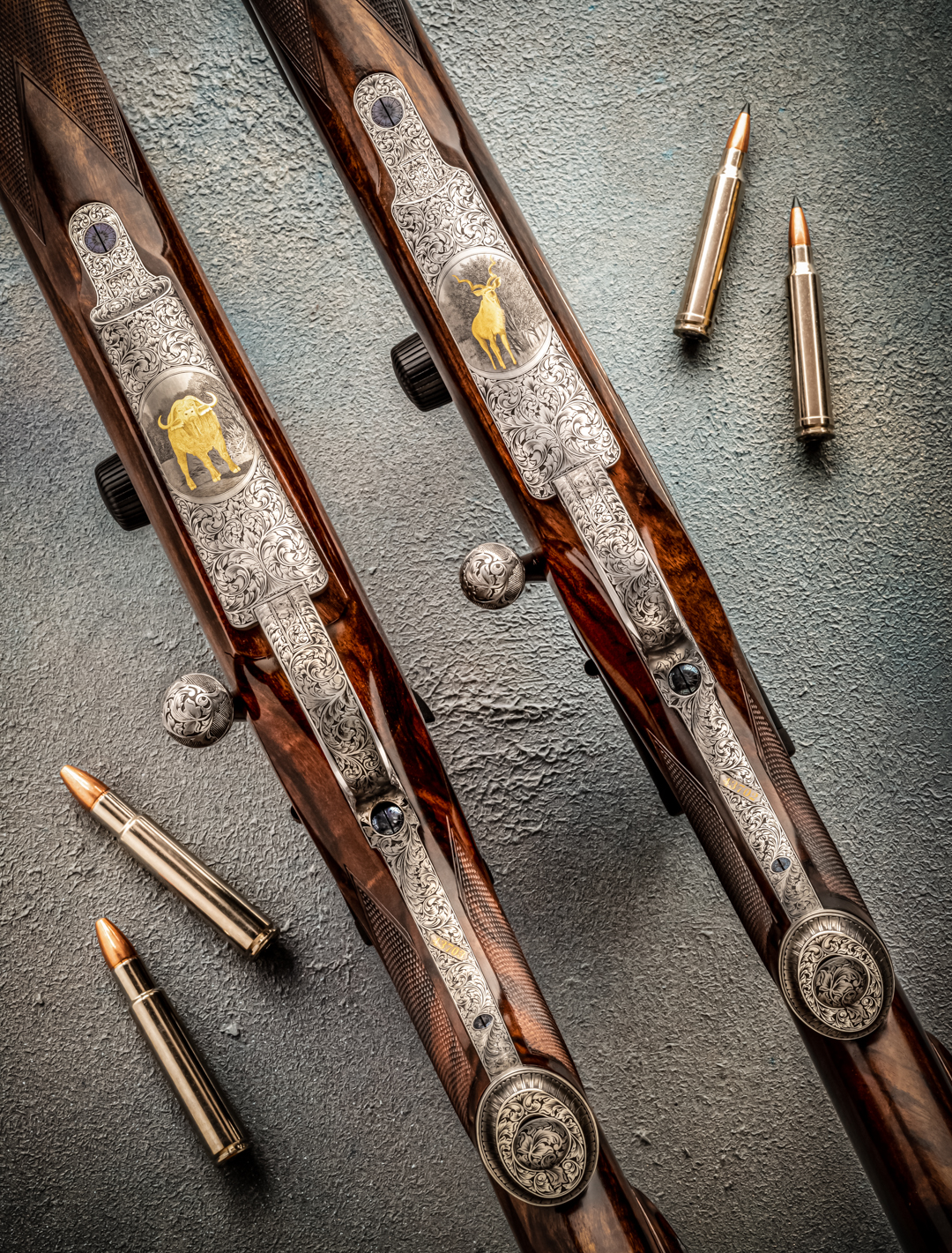 The .416’s barrel is twenty-two inches long and fitted with a Westley Richards quarter-rib, ramp and a leaf sights, set to 50 yards and 100 yards respectively.

It has an extended magazine box, carrying four rounds of the .400-grain Federal Premium A-Frame ammunition with which it was regulated. The .300 carries the same number in a standard, flush-fit magazine.

With the quick-detach ‘scope mounts and Swarovski Z6i fitted, it becomes a longer-range weapon in an instant.

The walnut stock had to be chosen carefully in order that it be stable and strong throughout its length, yet pleasingly figured and coloured. Extra support to the woodwork is provided by the extended tang and the top strap, which extends over the comb. 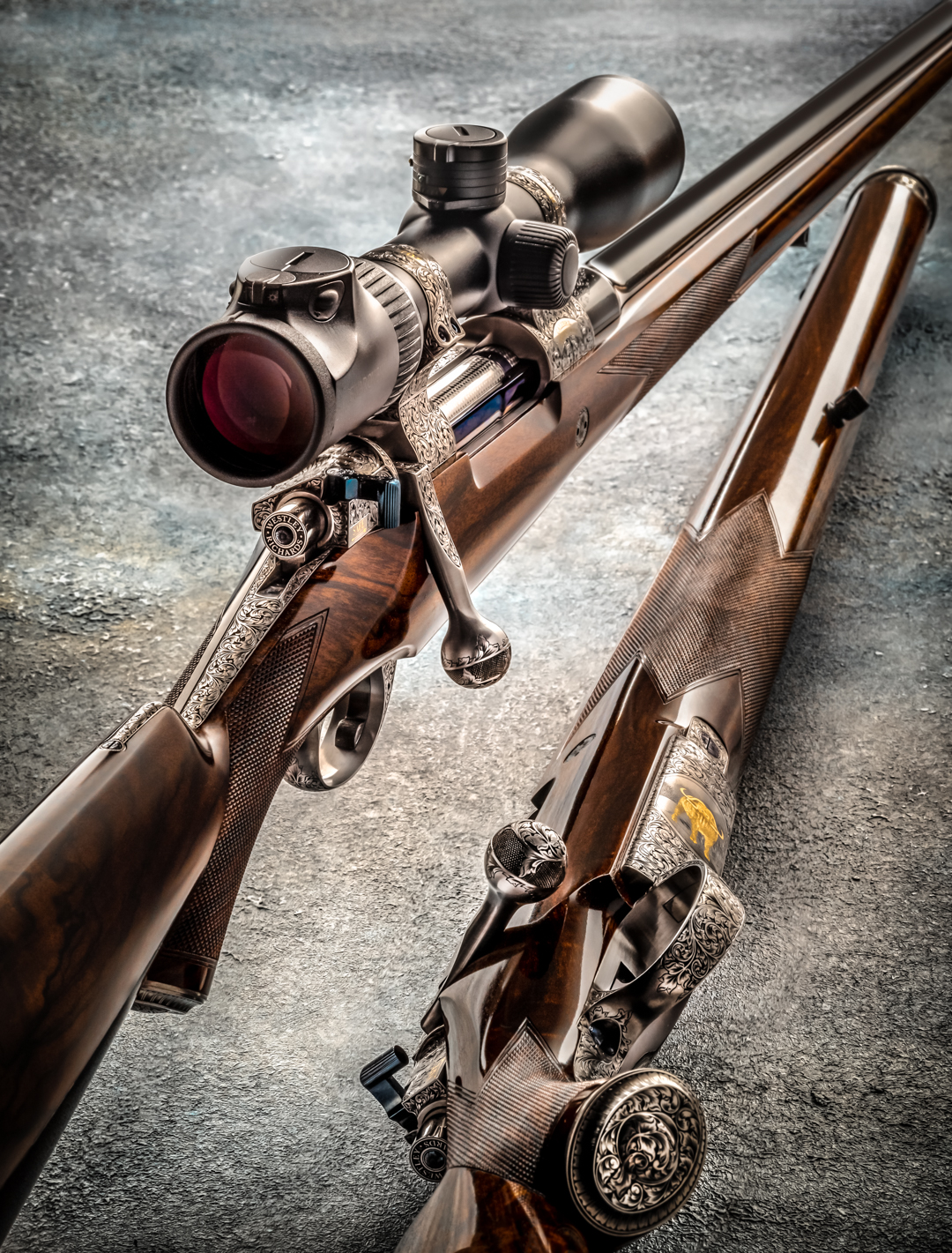 The .300 Win Mag (serial number 43702) is a good deal lighter, at 8lbs 8oz un-scoped. It is regulated for 180-grain Federal Trophy copper ammunition and the twenty-three inch barrel carries no fixed sights but is fitted with Westley Richards mounts and a Swarovski Z6i ‘scope.

Like its big brother, it features an extended top-strap and guard-strap to bolster the hand.

Side by side on the bench, the rifles look like they belong together; every detail from one is mirrored on the other. Not a perfect, machined-precision match but a slightly scaled, hand-engraved and artistically customised approach to matching; creating a perfect relationship that could not be achieved without the human touch. It has similarities to the way a portrait painter can capture an essence in a subject that a photograph might lose, despite being objectively more accurate. 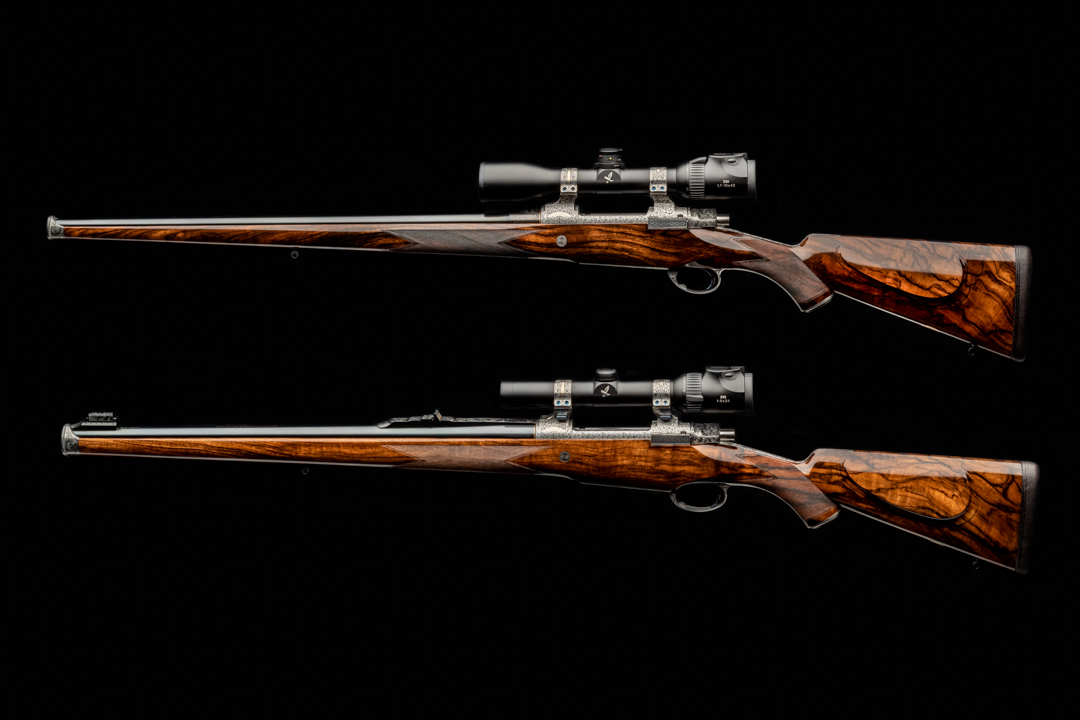 Keen observers will see the Westley Richards hinged foresight protector, the grip-cap with trap and the carefully sculpted muzzle-caps. Those caps are one of the keys to getting the proportions right. They took a great deal of thought and filing to perfect. From there, the stock shape in the front half of the rifle could be shaped appropriately to give the flowing proportions necessary to make an elegant rifle.

It was a challenge for our gunmakers to work out a plan, devise a shape, style and execute this build; not just of one unusual rifle, but two of different weights, and proportions. However, for an experienced and skilled team, the issues were less onerous than one might imagine. 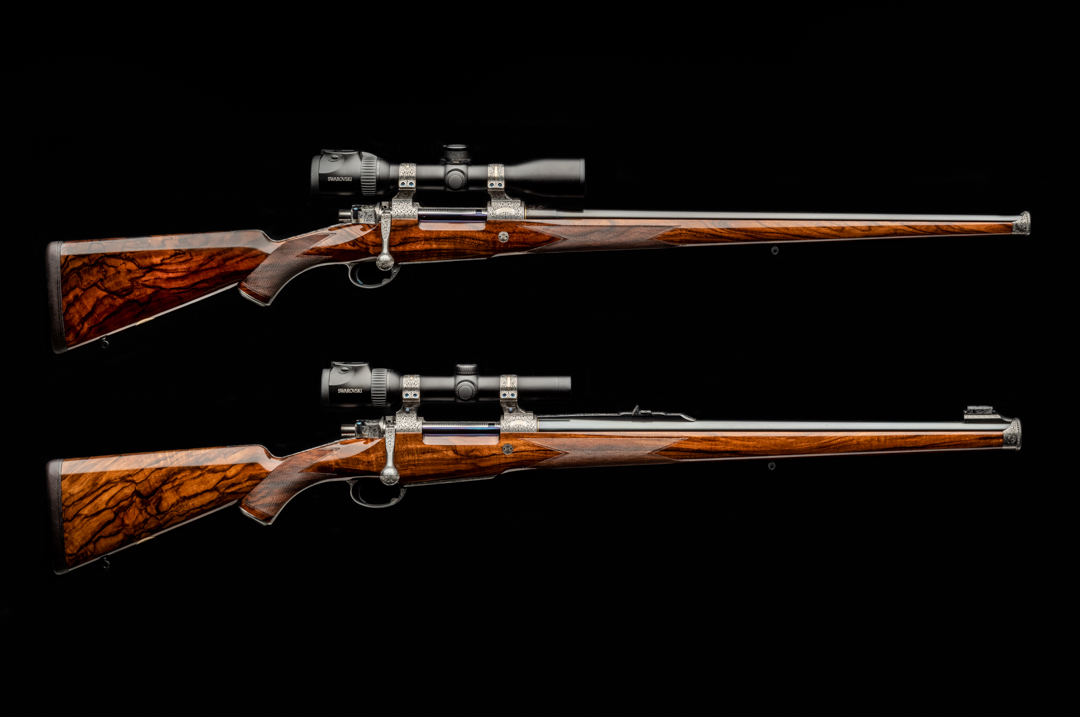 Accuracy was improved at the same time as finding a solution to the stabilizing of the wood in the final third of the rifle by incorporating the sling eyes in posts which extend through the stock and locate in the barrel to provide an anchor point.

Special projects are part of what makes Westley Richards such a responsive and personal gun-maker to the customers who come back time and again to ask us to shape their visions into wood and steel.

We rarely back away from a challenge and look forward to the next. 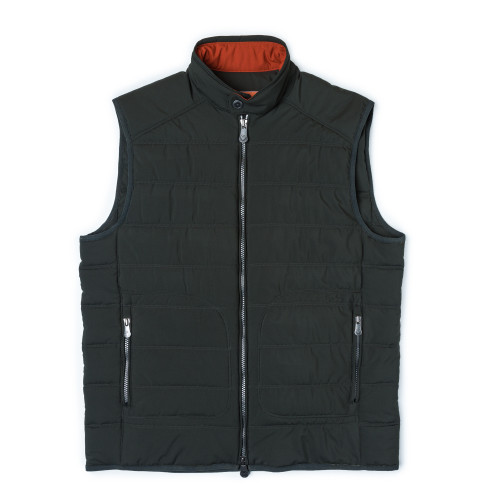 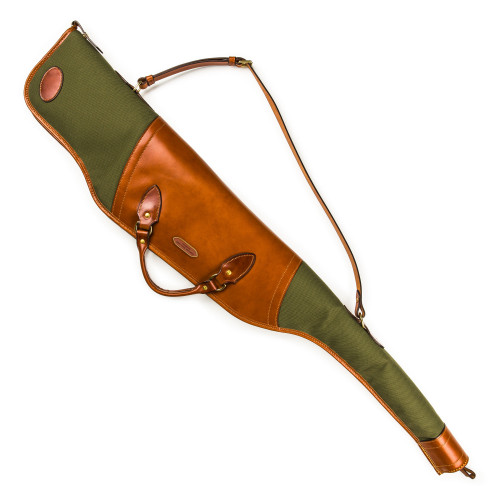 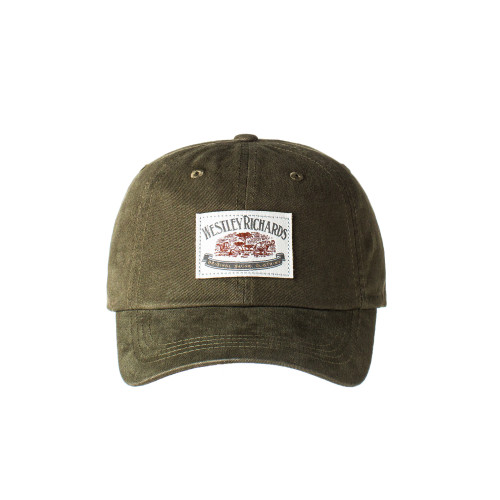