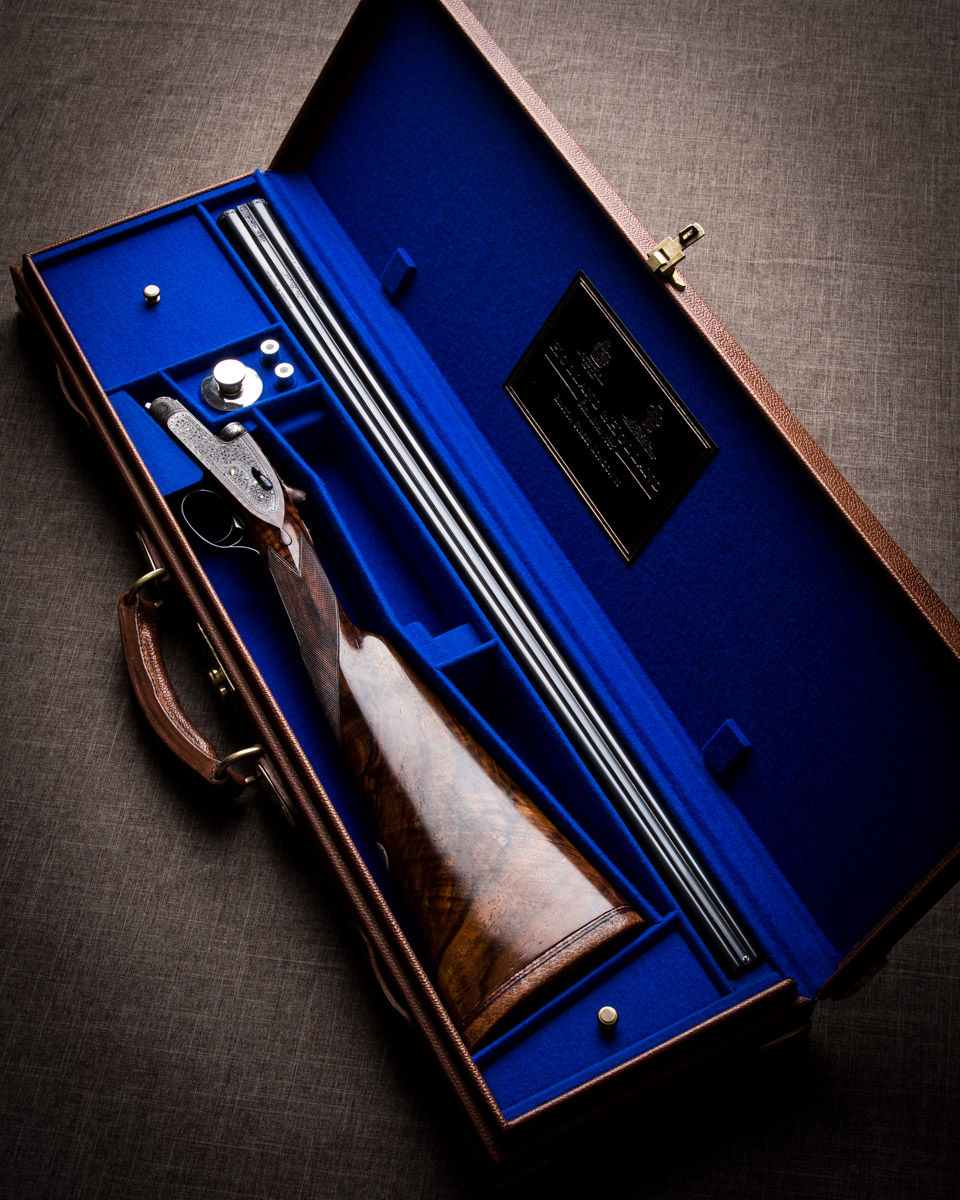 A wonderful little gun recently showed up at the U.S. Agency, a Holland & Holland The'Royal' Model in .410 bore. Finished in 1964, this gun was acquired from the family of the original owner and it remains in original, as new condition.

Henry Holland was apprenticed to his uncle Harris Holland in 1860 and by 1876 the two formed a partnership creating the firm “Holland & Holland”.  Among the firm’s fifty-one patents, it is Henry Holland’s 'Royal' model sidelock ejector, Holland’s flagship hammerless double gun or rifle, that remains one of the main reasons guns from this maker are among the most sought after in the World. I would also venture to say, it is most likely a Holland & Holland 'Royal' that pops in your head when you think of a sidelock shotgun. The ubiquitous design is used on the best guns offered from makers in England, Spain, Belgium, Italy, and Turkey all the way to Japan and it remains the most copied sidelock action design in history. 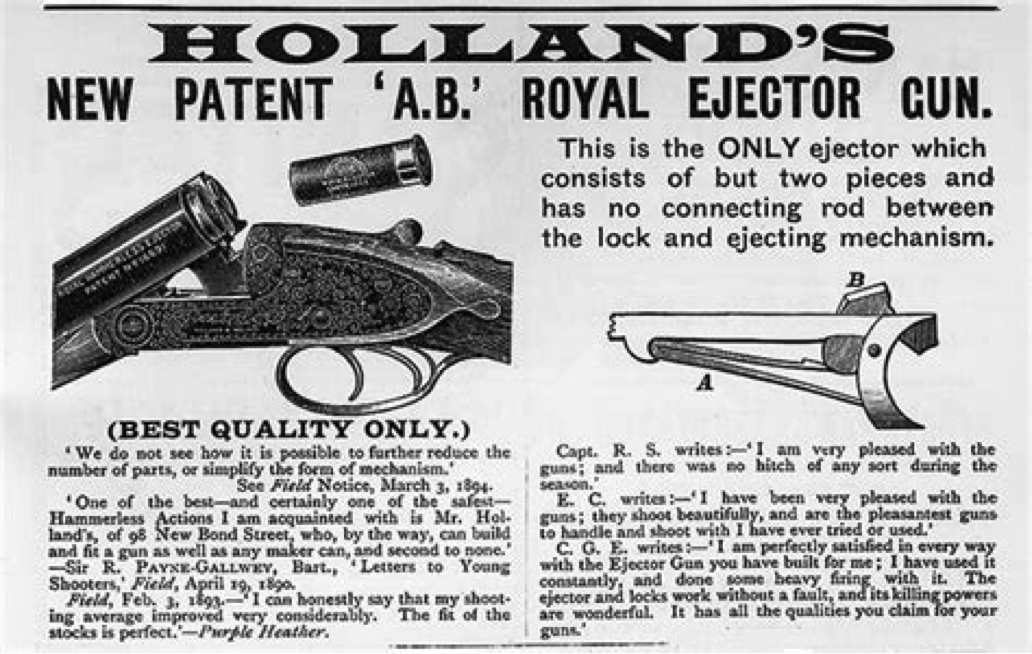 A 1901 Holland & Holland advert from The Badminton Magazine 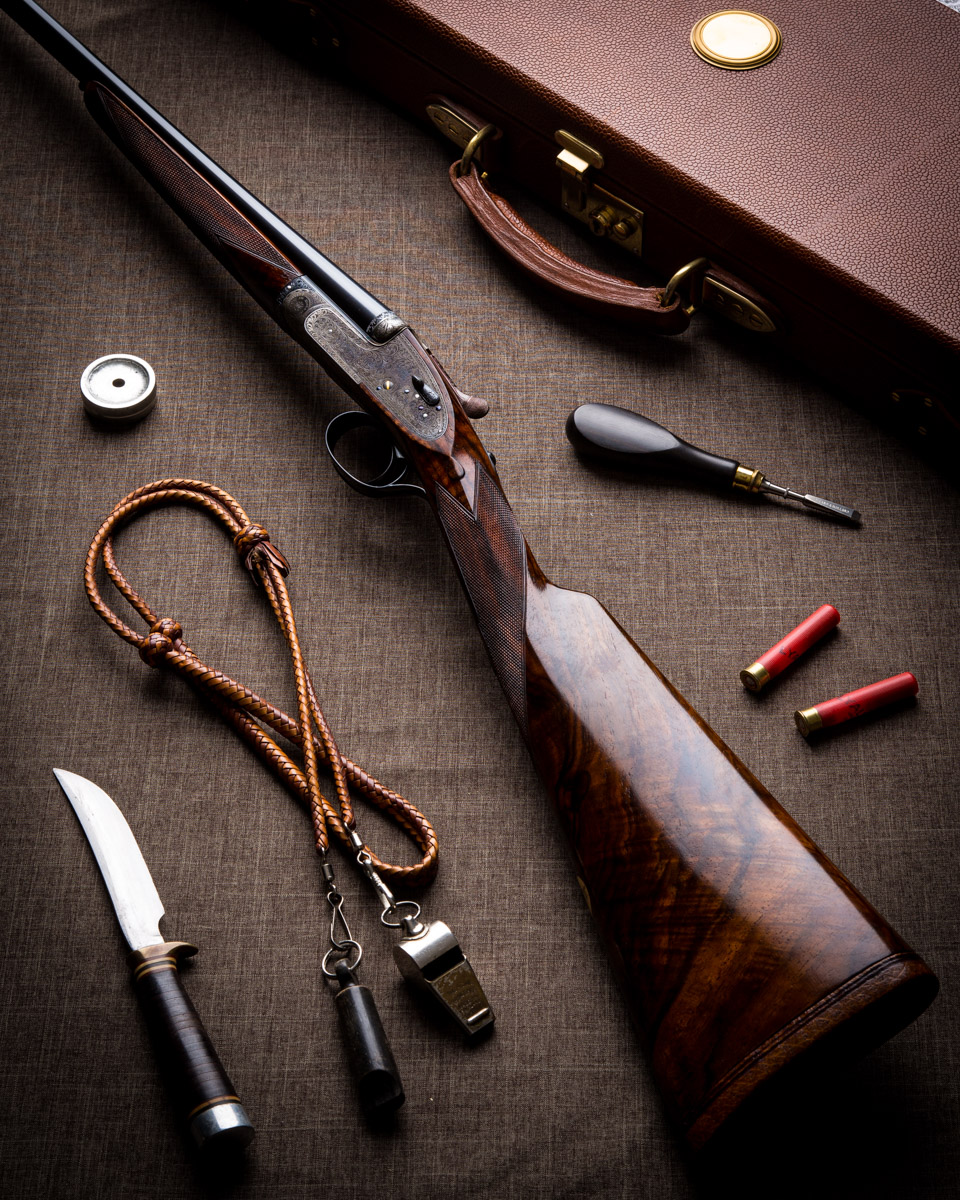 A best quality Holland & Holland 'Royal' stocked with a long LOP over a thin leather recoil pad. The stock oval still retains the initials of the original owner “JFT”.

Today best quality shotguns in .410 bore and 28 bore are in high demand worldwide by both collectors and shooters but this is a relatively new phenomenon. At the end of the nineteenth century and the beginning of the twentieth century, the rapid development of hammerless breach loading gun designs in England was largely fuelled by the sport of shooting driven birds. Shooters were looking to fill big game bags and a pair of 12g guns became the standard for most shooters. While they may have been a bit less effective knocking down a late season pheasant, the smallest bore sizes like the 28 and .410 were considered more appropriate for women or youngsters. As a result these bore sizes are most often encountered as trade made, lesser quality guns with smaller, youth sized stock dimensions.

However, discriminating American hunters preferred the smaller bore sizes for North America’s smaller game birds such as grouse, woodcock and quail. Moreover, the small-bore guns with shorter barrels and lighter weights lend themselves to the American style of walk up shooting over dogs that often occurs in heavy cover. Between the two World wars, the American’s start to fill the English gun maker’s books and a trend emerges of English guns being made in more “American” configurations. By the time gun making resumes in England after World War II, the U.S. had become the biggest market in the World for sporting arms and as a result, the English made guns we encounter from the post-war era reflect this heavy influence of “American” preferences. 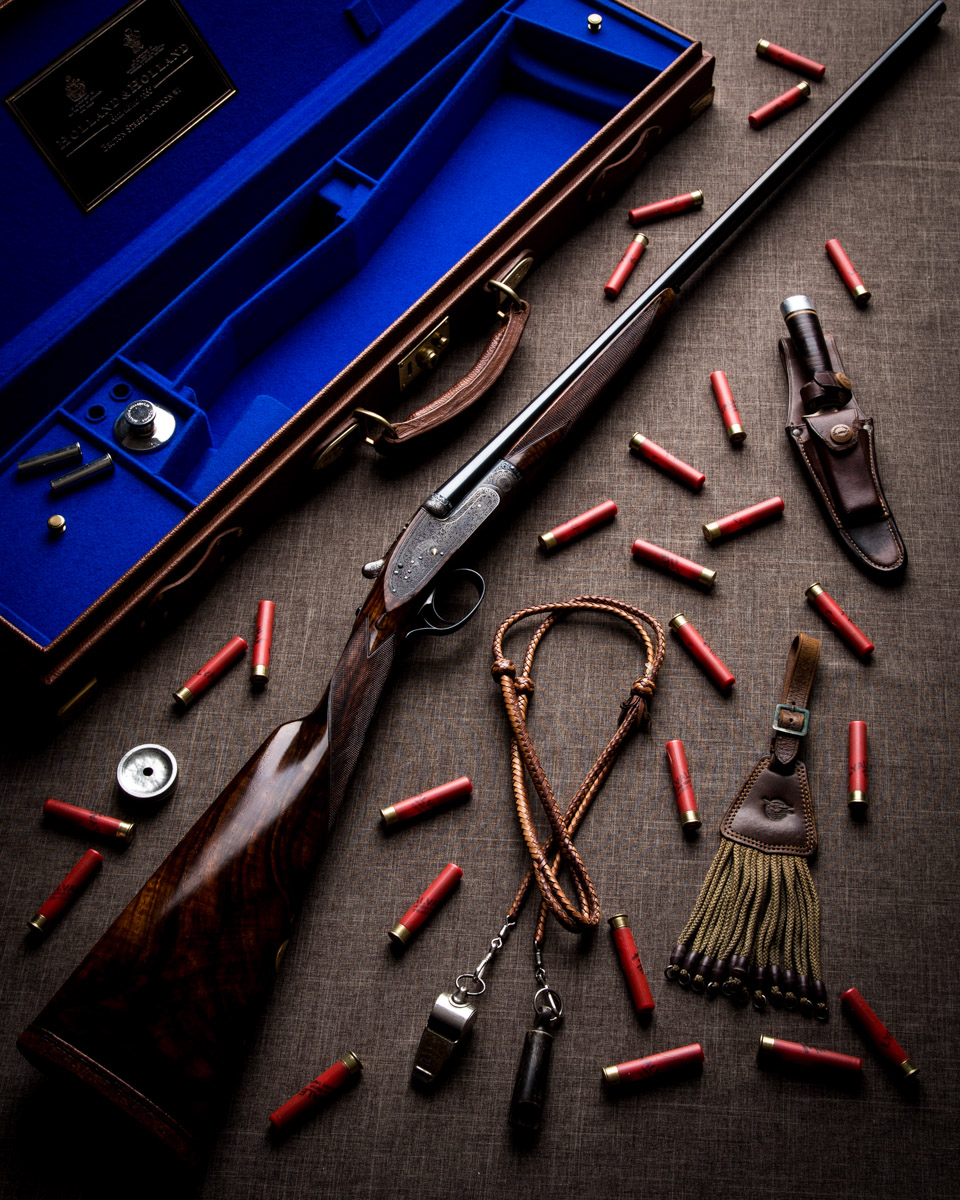 This .410 bore is fitted with all of Holland’s hallmark patent features such as hand detachable locks, single trigger, ejectors, self-opening mechanism and the house style 'Royal' engraving. In addition, the size of the action is wonderfully filed and scaled, the engraving is beautifully cut and the fit and finish is superb. This is a best quality Holland in every respect. 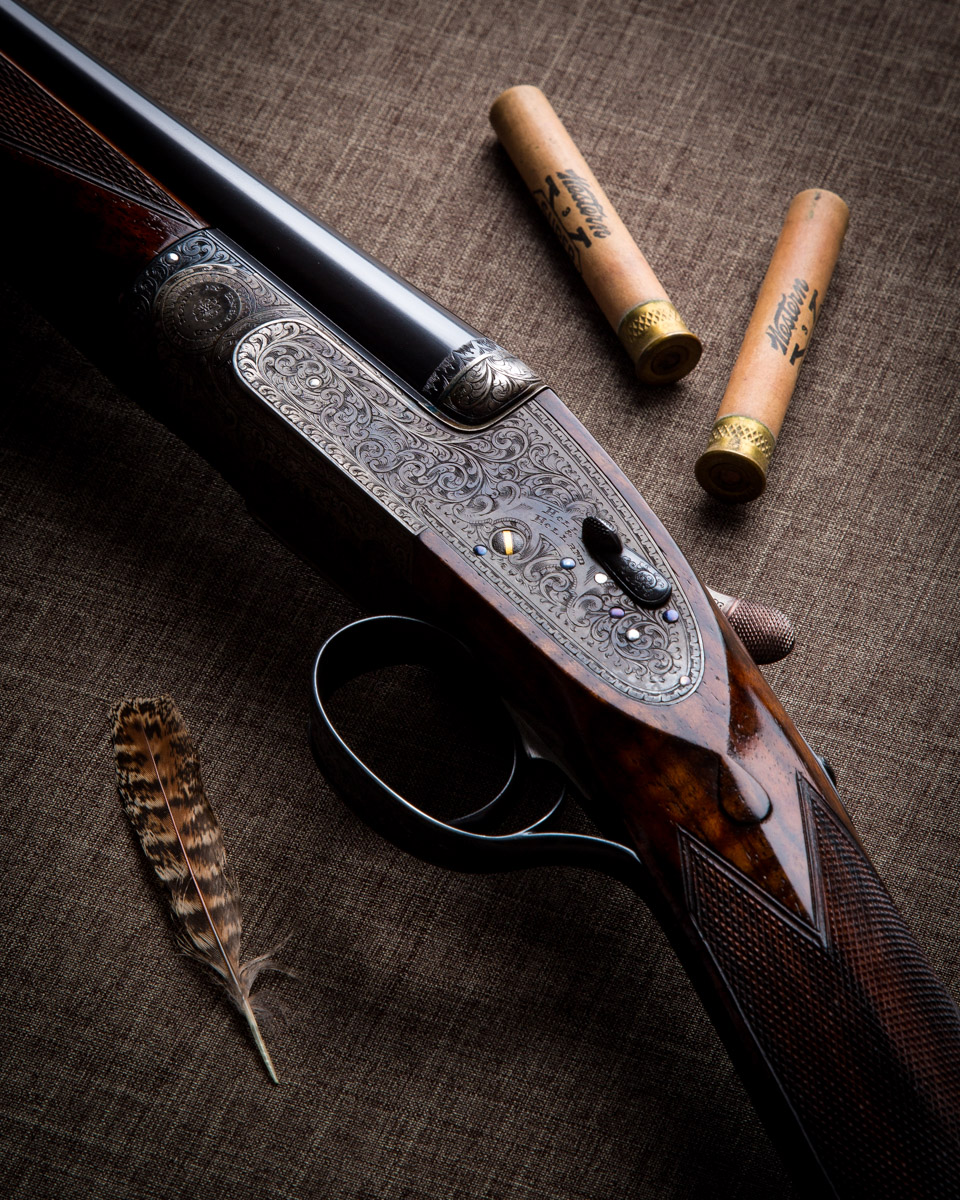 The 'Royal' was originally introduced in 1883 by Henry Holland and John Robertson. Holland’s patent single selective trigger design, arguably one of the finest in the English gun trade, was finalized in 1897. In 1908 the hand detachable lock, or lock plates that are removable by unwinding of the lever on the left side, was patented by Henry Holland and Thomas Woodward. 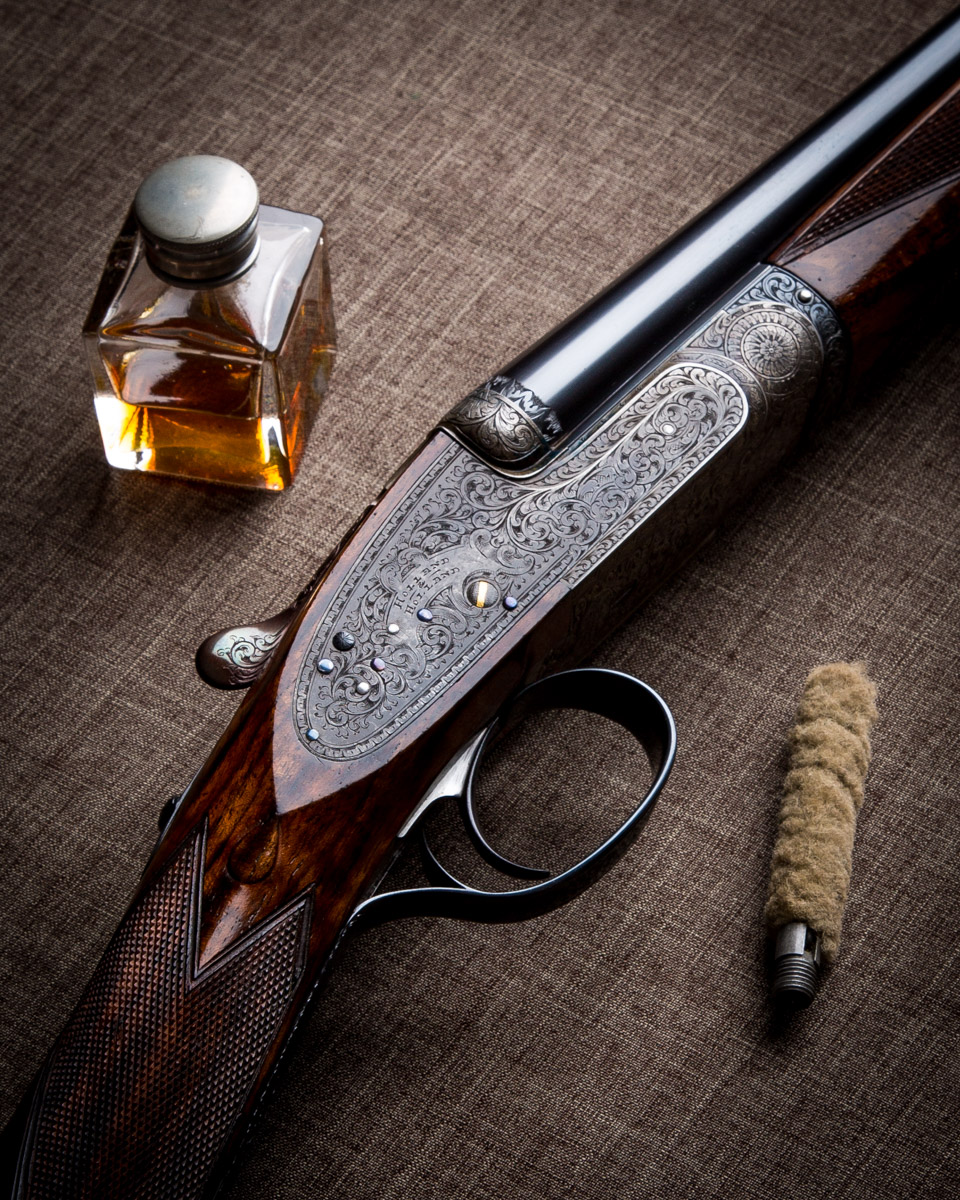 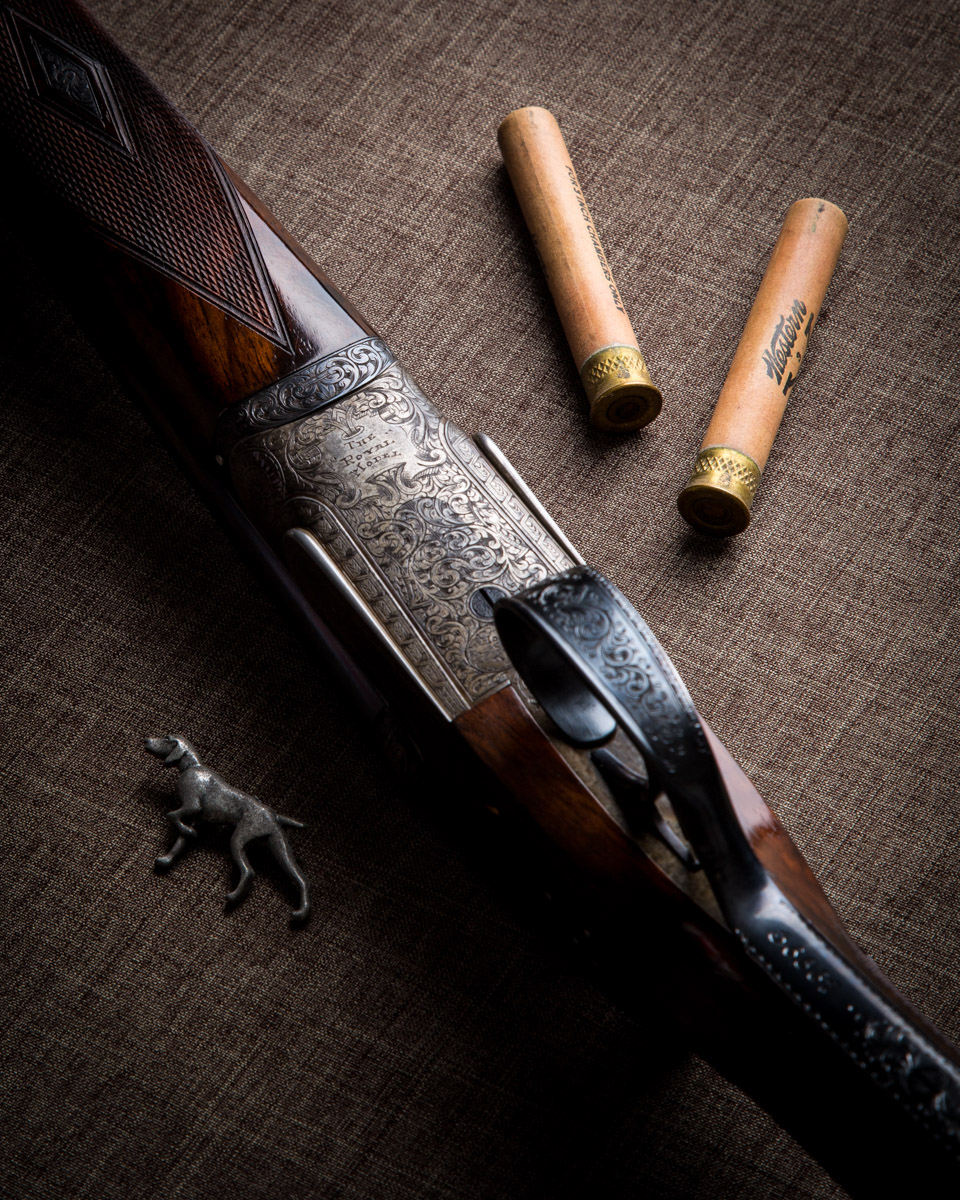 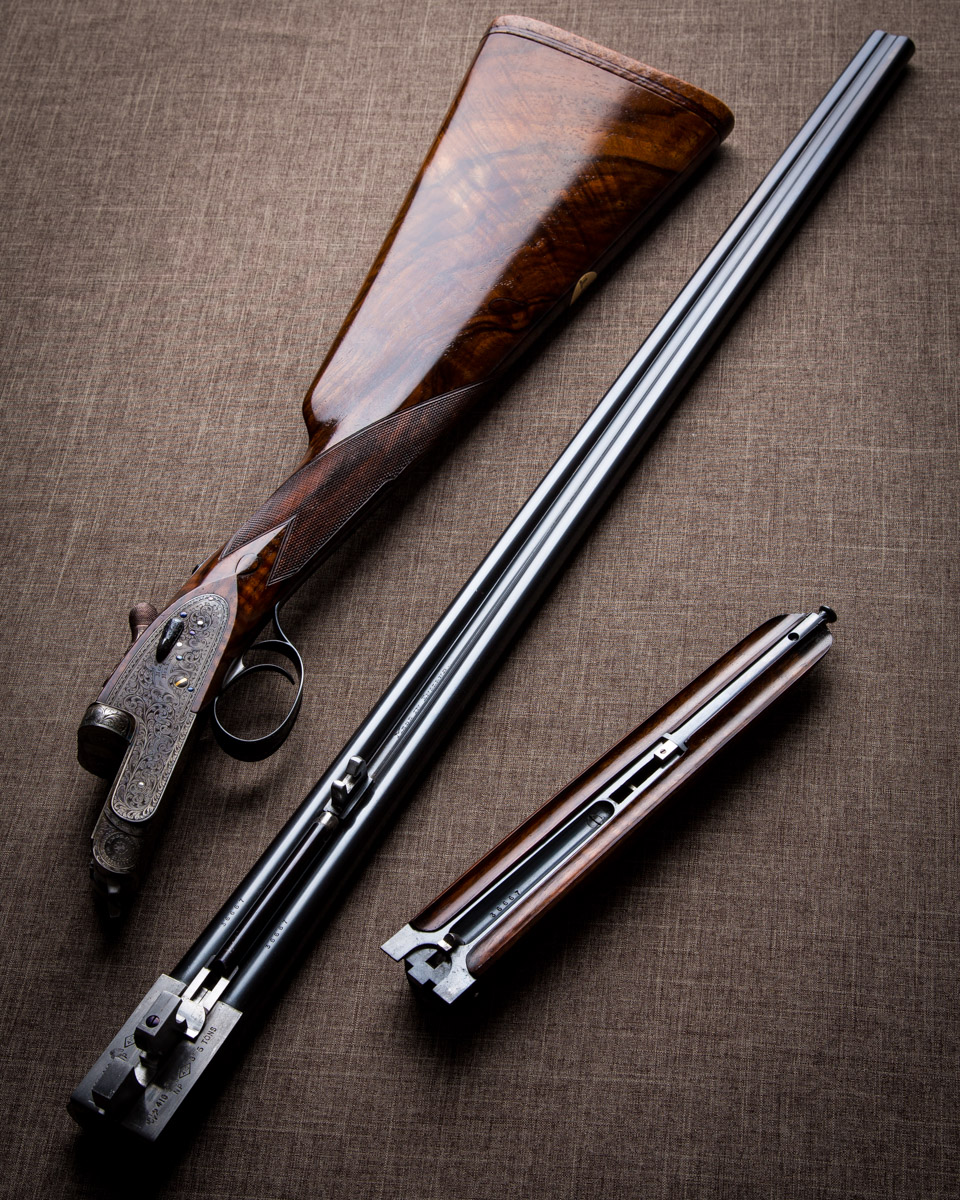 Holland’s self-opening mechanism was patented by Henry Holland and William Mansfield in 1922.