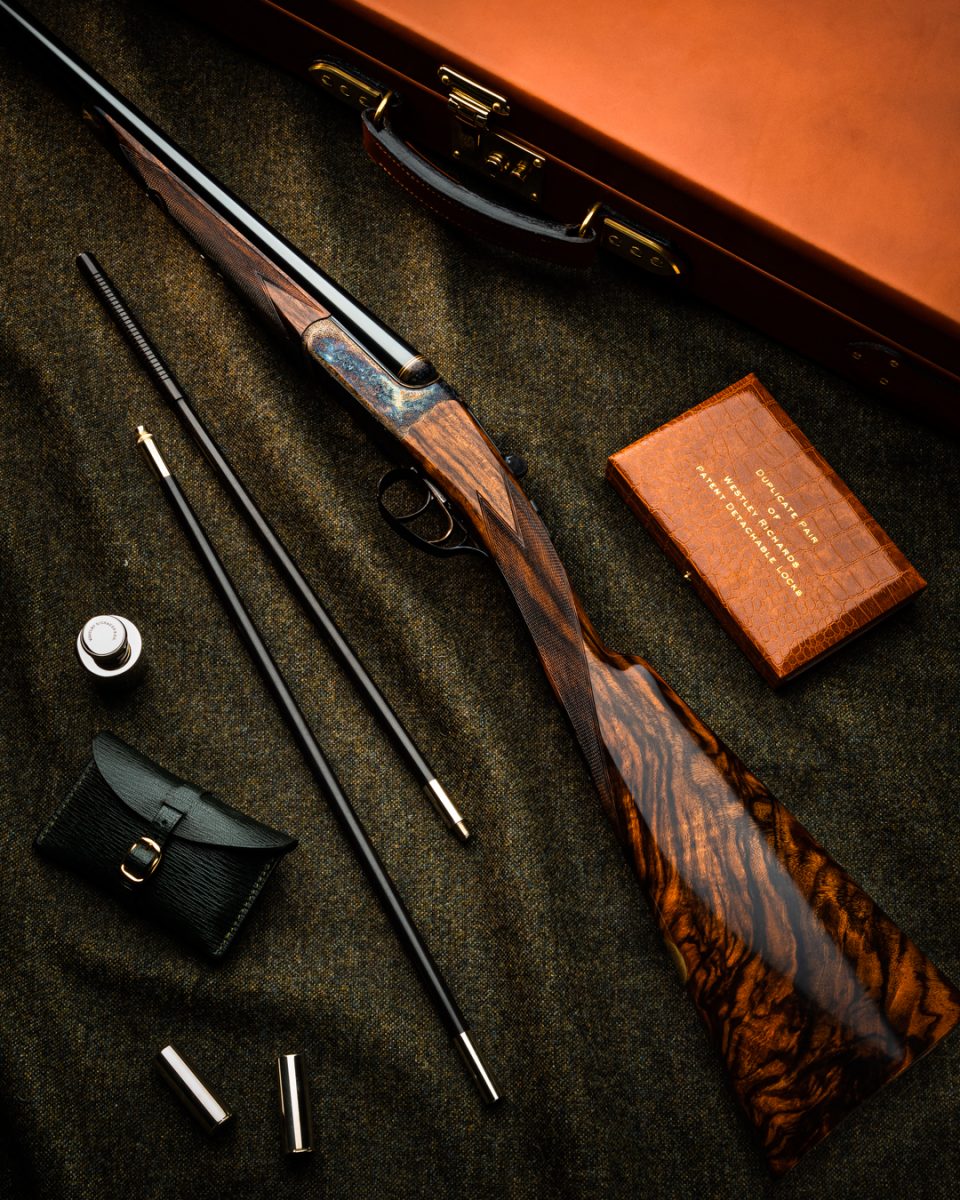 Every customer is different. We are happy to accommodate all sorts of demands or, as we prefer to think of them, guidance.

This particular gentleman is building (actually we are building for him) a set of four guns. This is the second of the set: No.2, was requested to be built as a 'traditional format gun in 28-bore'. He added that he uses Winchester or Fiocchi cartridges. 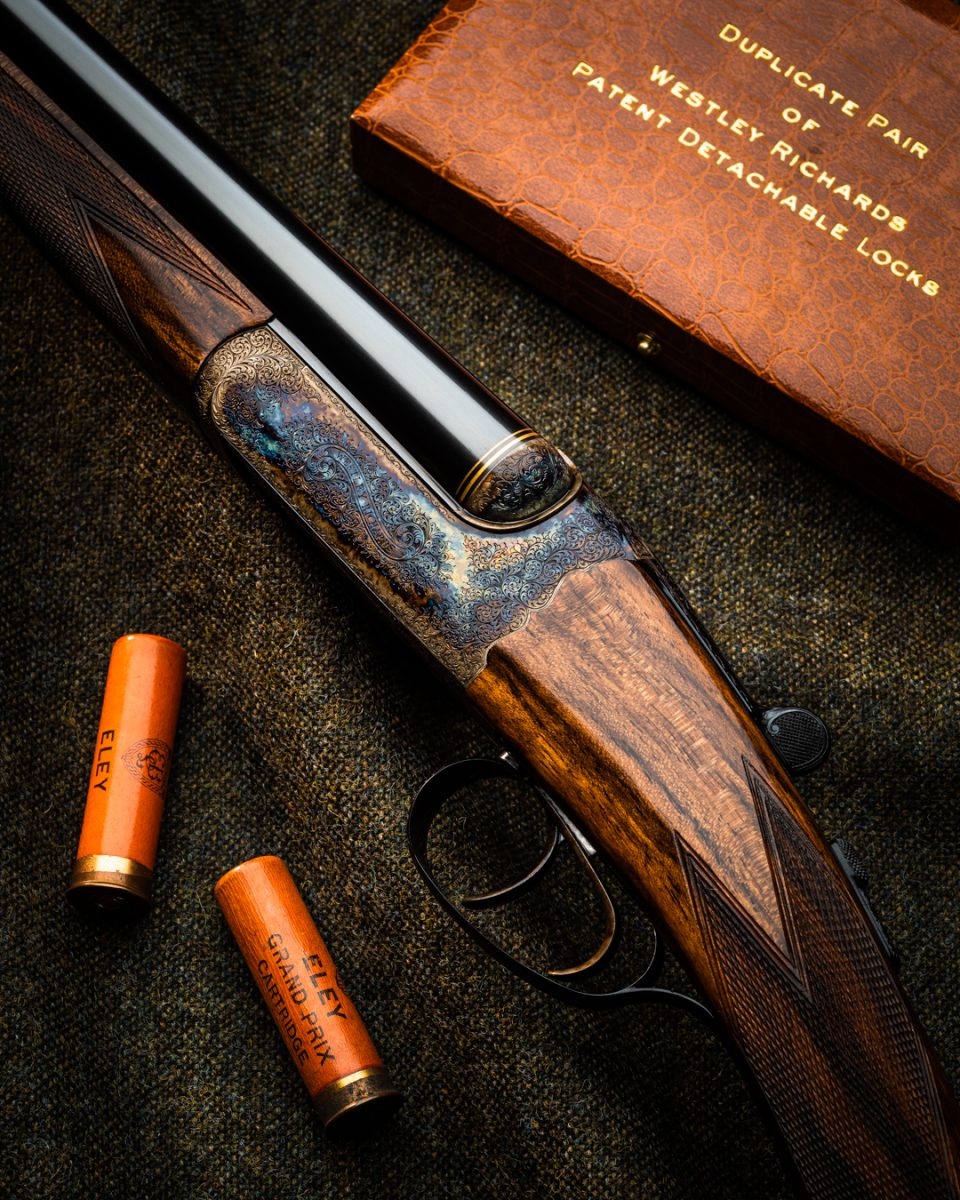 Being very traditional it has a colour case hardened finish, concave 'game' rib on the 29" chopper-lump barrels and a straight-hand stock with chequered butt. Being a 'best' gun, it boasts a fabulously contrasted black and deep-amber walnut stock and the finest levels of finish, as well as nice details like a rolled-edge trigger guard. The observant may notice the rolled edge is only on one side - which is all it needs to be, the reason it exists is to protect the side of the trigger finger from a sharp edge. That finger travels alongside only one edge. Rolling the other edge is redundant.

Chokes are  Full and Three-quarters, so we suspect the client is more than an accomplished shot. Commonly, the tighter choke would be in the left barrel but for this order, the tight choke was specified for the right. 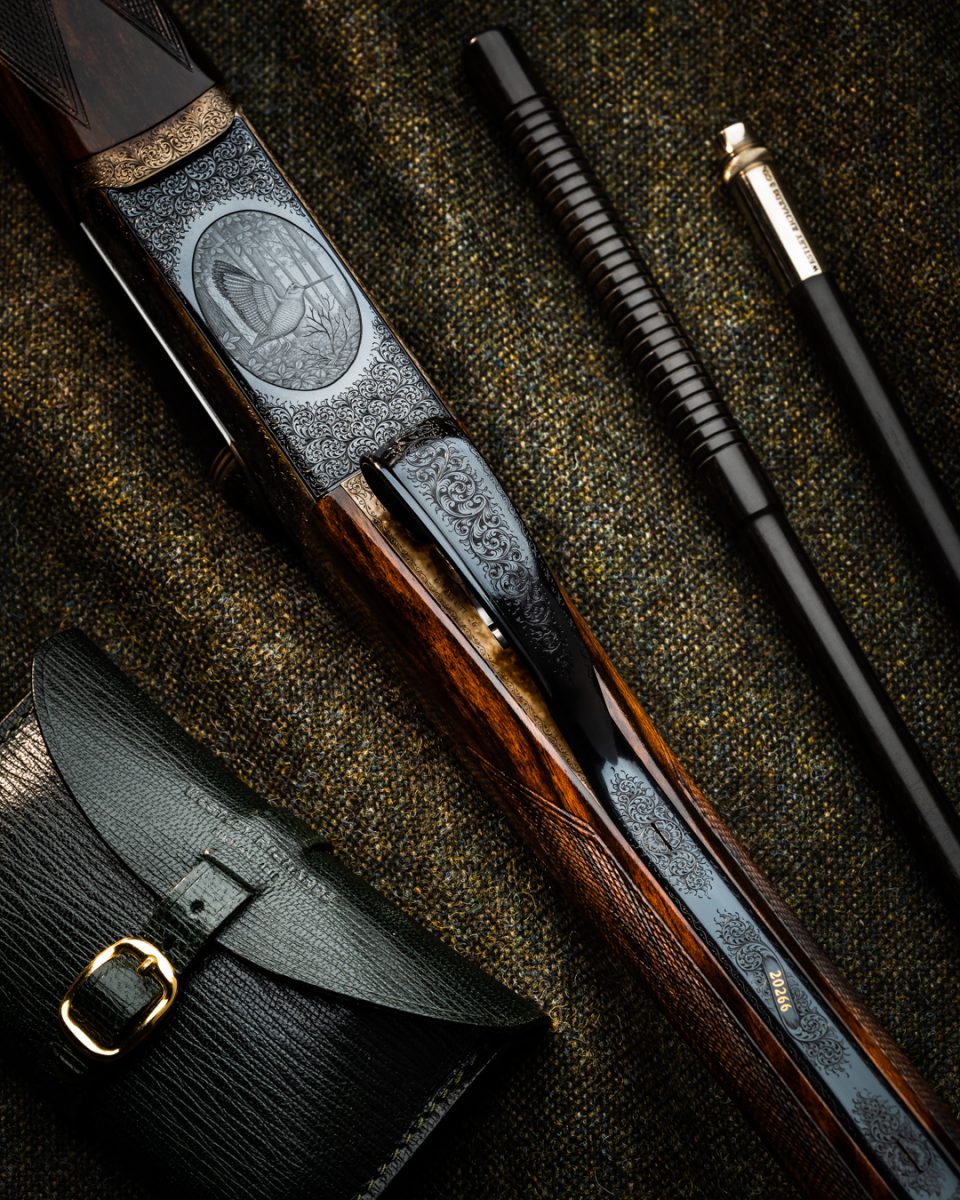 Scaling a game gun for an adult male so that in 28-bore it looks and handles as it should requires precise detailing. Though the bores are smaller and the action slimmer, the operator's hands, stock length and fingers are as big as they would be were he shooting a 12-bore. The fact that you can look at these photographs and not be able to say for sure what bore the gun is, attests to the correctness of the proportions.

Scaling is key, amplified when creating lock-work, which in this case is the Deeley and Taylor hand-detachable lock. Fully polished, these are works of art in themselves. Perfect in form and function. 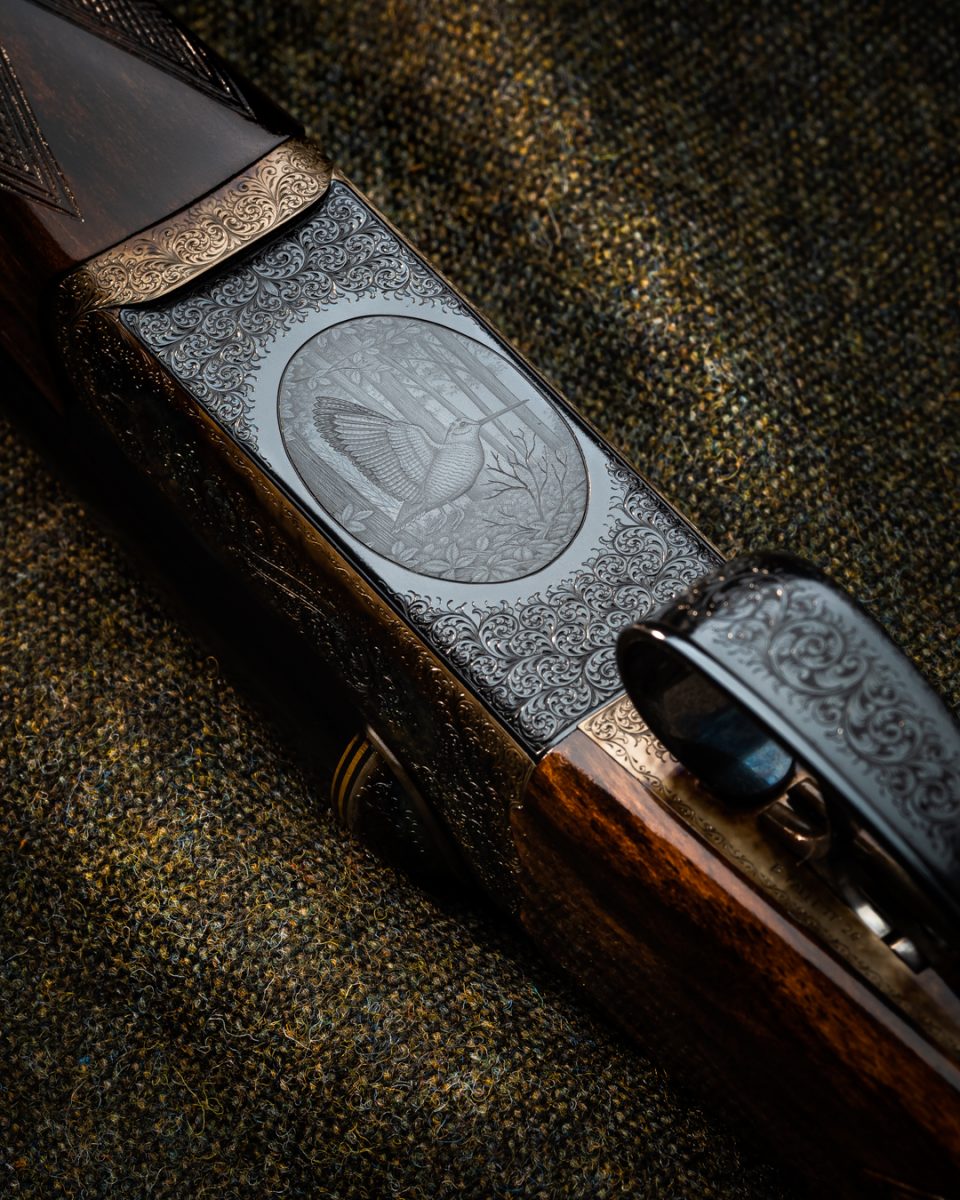 The engraving pattern is traditional fine scroll with 'Westley Richards' in a scrolled banner on each side. To suit the smaller frame of the 28-bore, the size of the scrolls has been reduced in order not to overwhelm the lines of the action.The bottom plate, which is hinged to allow for the removal of the locks; an action requiring no tools, is reserved for a single game scene of a lone woodcock flying through a forest. Some engravers specialise in scrolls and others in game scene engraving. Brad Tallett is a man who can cut both , which is exactly what he has done here. 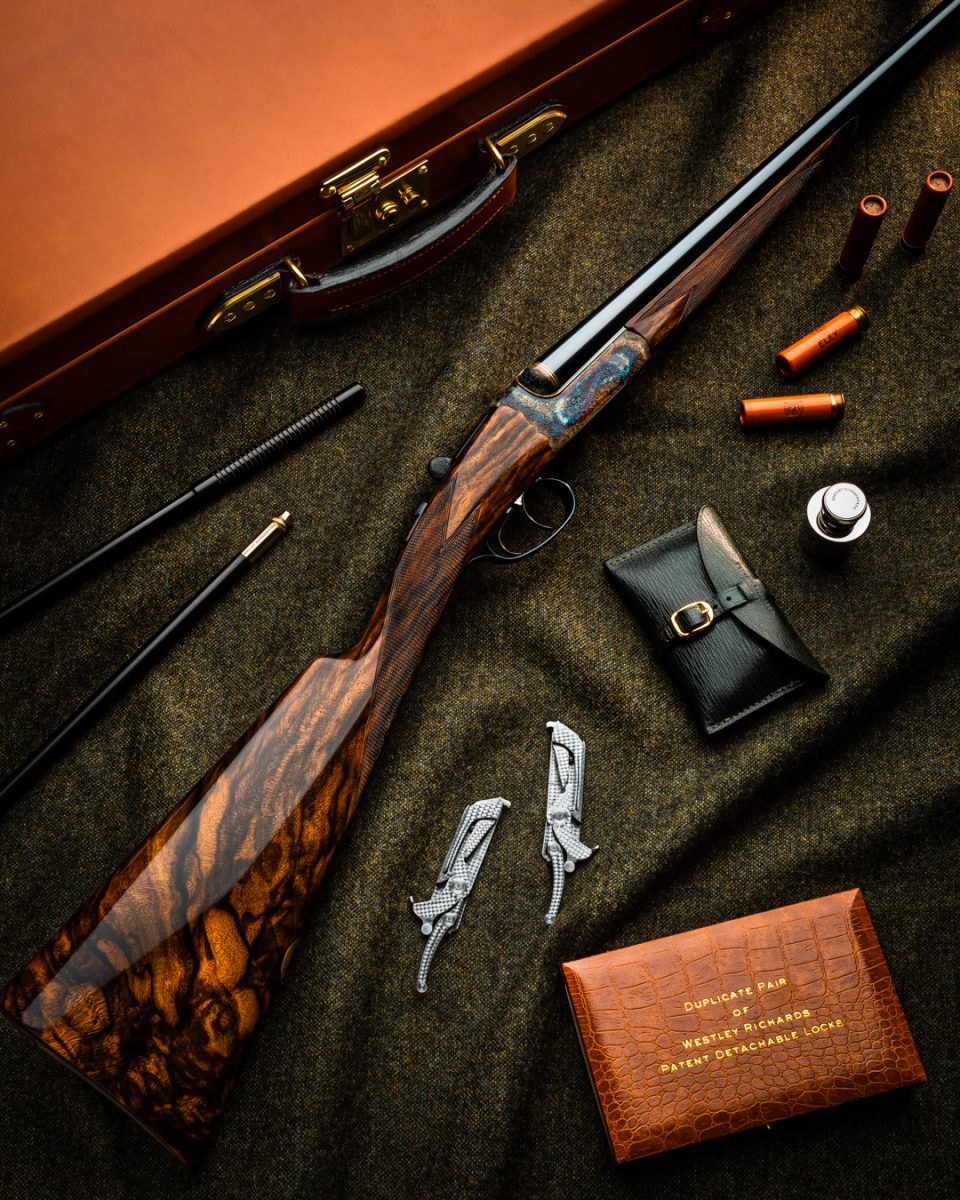 Westley Richards locks do not go out of order. Failure is simply not something about which one has to worry. However, many of our customers still order an extra set of  hand-detachable locks (which are not inexpensive). They come in a beautiful, bespoke leather box, which is fitted into the gun case, along with the rods, oil bottle and snap-caps. It may be a 'belt and braces' approach but, so equipped, this gun will be mechanically insured for two centuries of work. 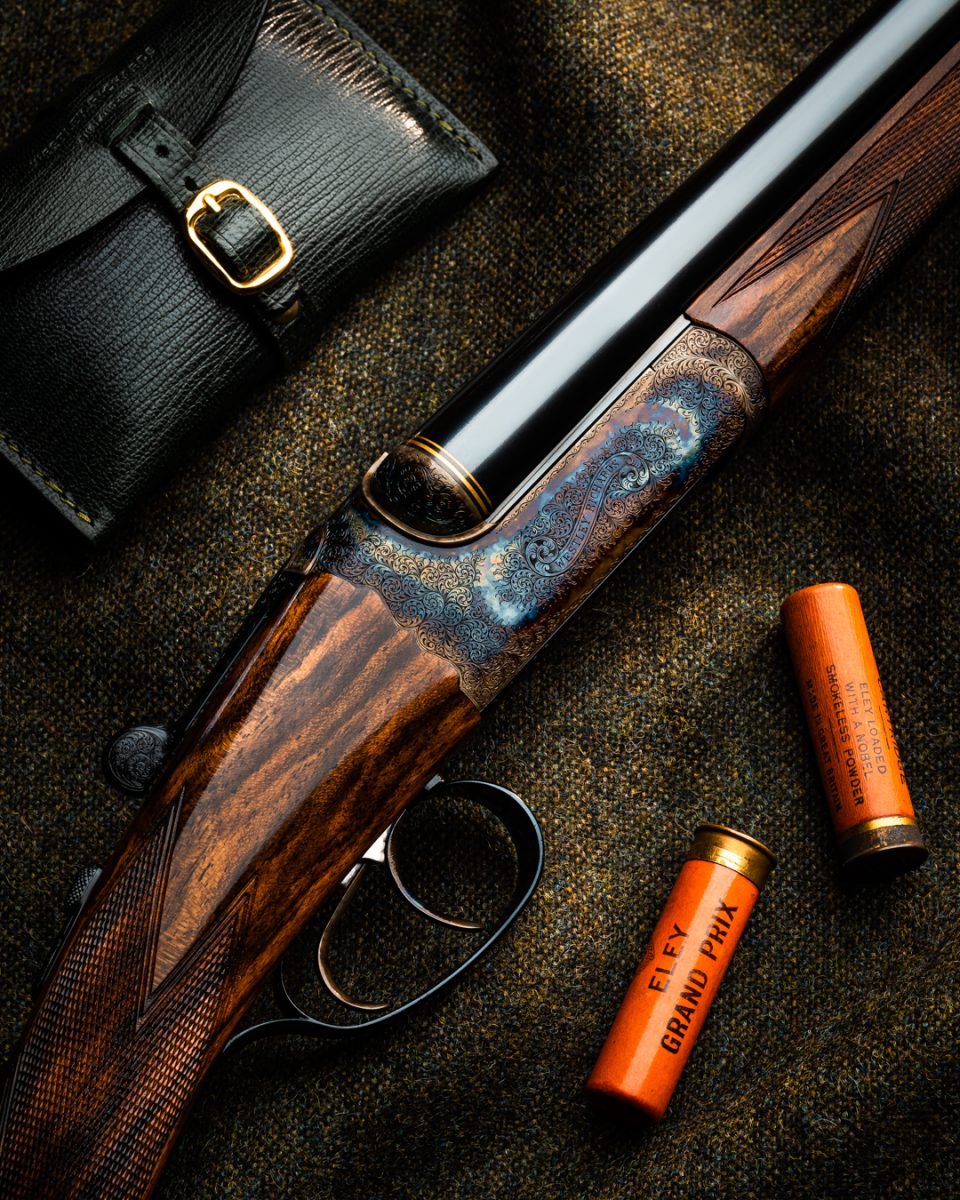 One or two little, subtle, highlights are the gold name on the rib and the two gold bands encircling the barrel tubes at the breech ends. The forend, with Deeley & Edge catch has a horn tip. The owner's initials are engraved onto the oval and the serial number is gold-inlaid.

Fitted into a new lightweight, toe-under, leather case, in mid-tan, with green Alcantara lining, this lovely little game gun, delivered in February 2021, is now ready to take its place in the owner's collection. Two down, two to go! 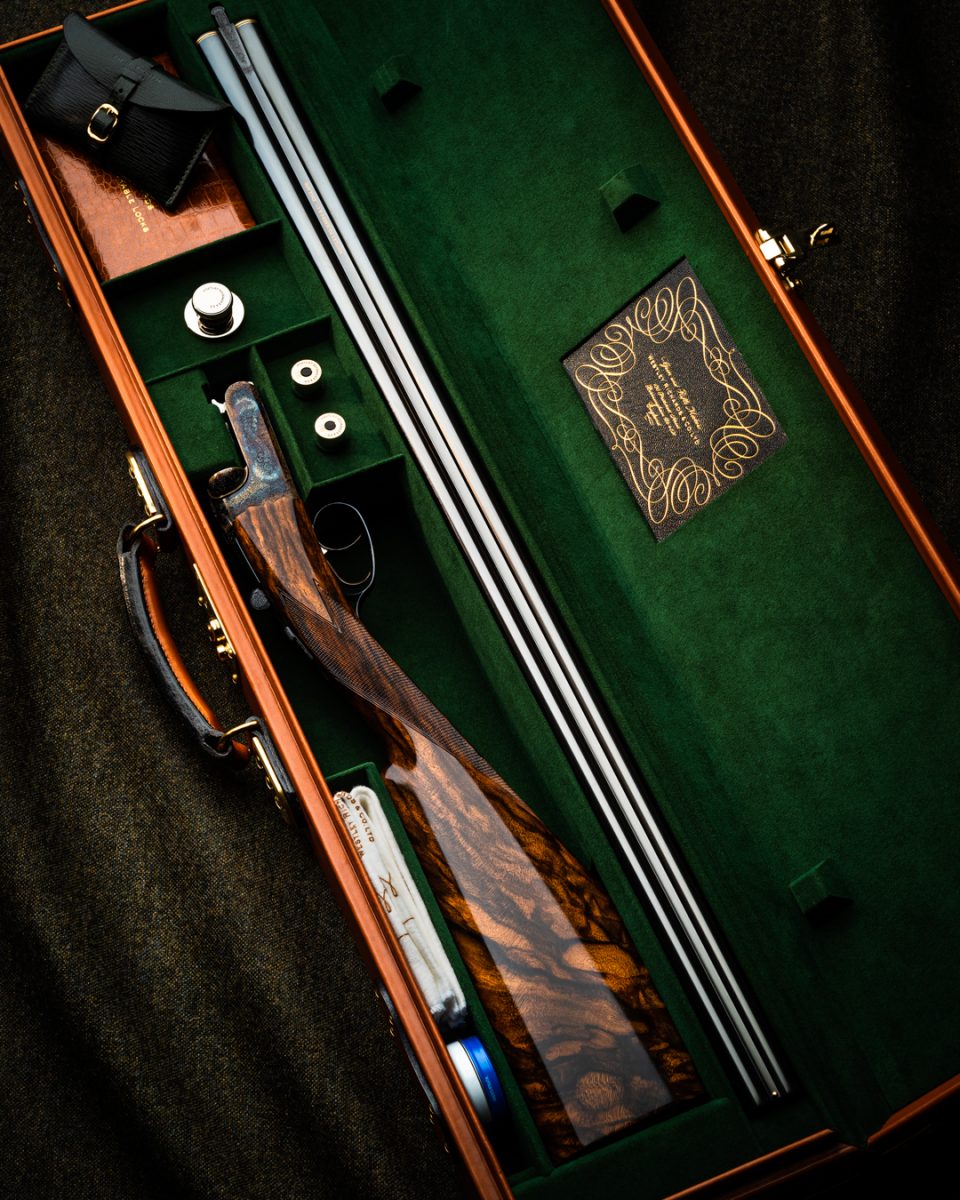