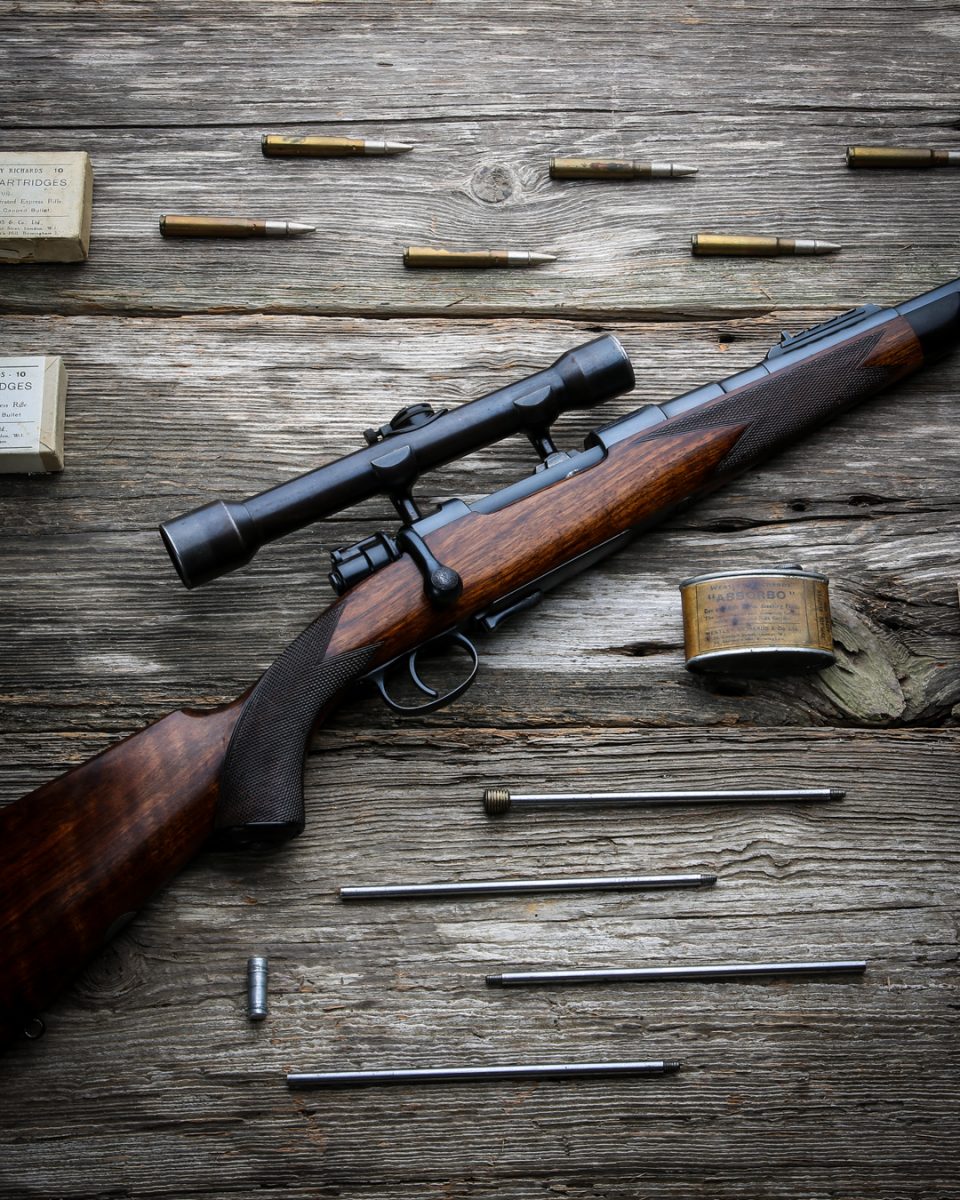 Westley Richards & Co. has been at the forefront of innovation in firearms since the firm started. While such innovations as the Anson and Deeley hammerless action and hand detachable locks are well known among gun enthusiasts, Westley’s contributions to the sighting of rifles, dating back to the 1850’s, may be lesser known but remain important developments in firearms, nonetheless.

The firm first introduced the flip-up tangent sight that folded both ways and was adopted by the British Government in 1854 and took out patents for adjustable telescope rifle sights as early as 1897. In some of Westley Richards & Co.’s earliest catalogs the firm extols the virtues of telescope sights on both double and single barrel rifles and were early proponents of high quality German made optics by makers such as Karl Zeiss. 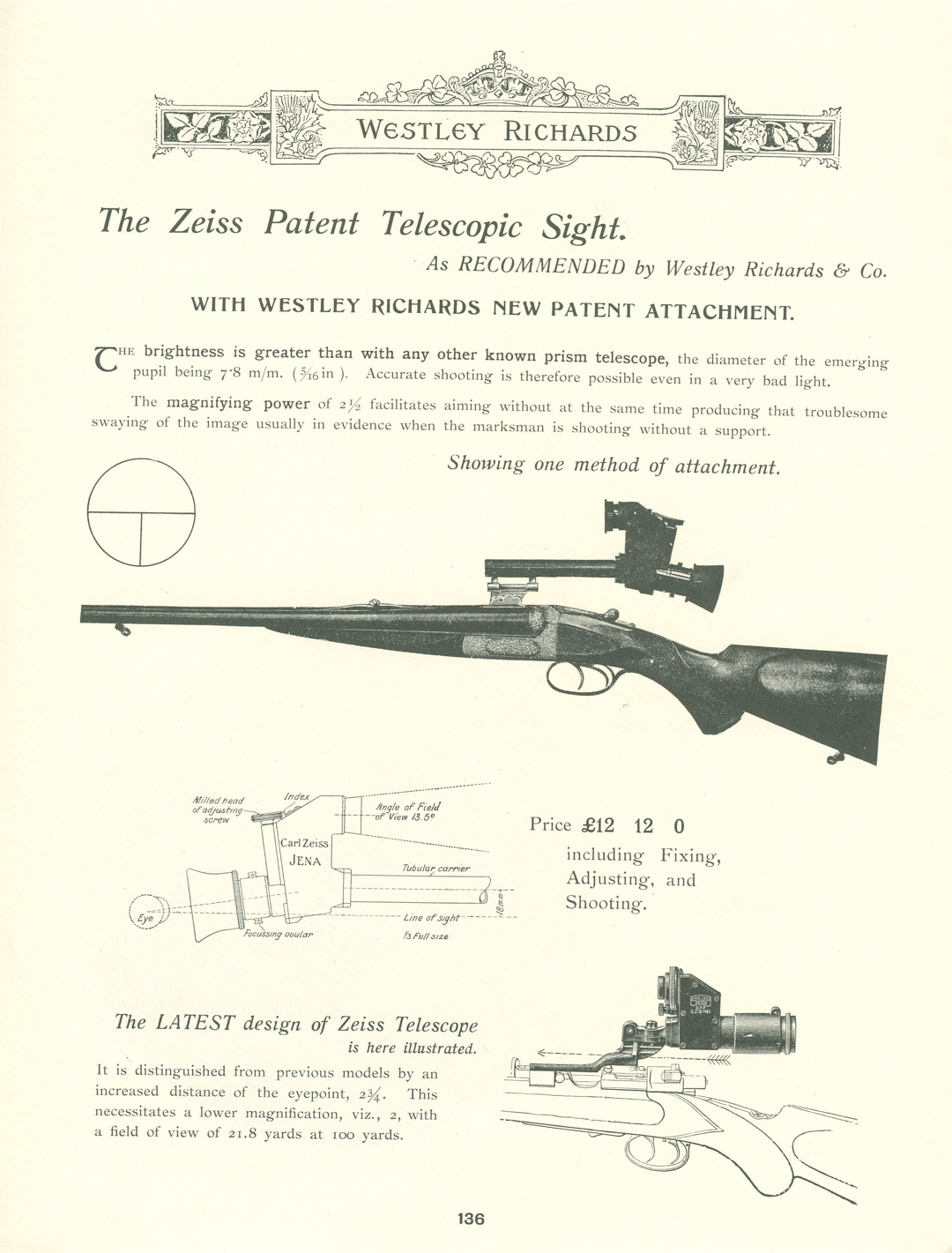 Recently arrived at the U.S. Agency is a wonderful example of a Westley Richards bolt action magazine rifle with one of these factory installed telescope sights mounted to the rifle with the firm’s scope fittings. Originally completed in 1929, this rifle is chambered in .318 Accelerated Express and topped with a Zeiss Zielvier telescope held on by Westley’s special attachments. 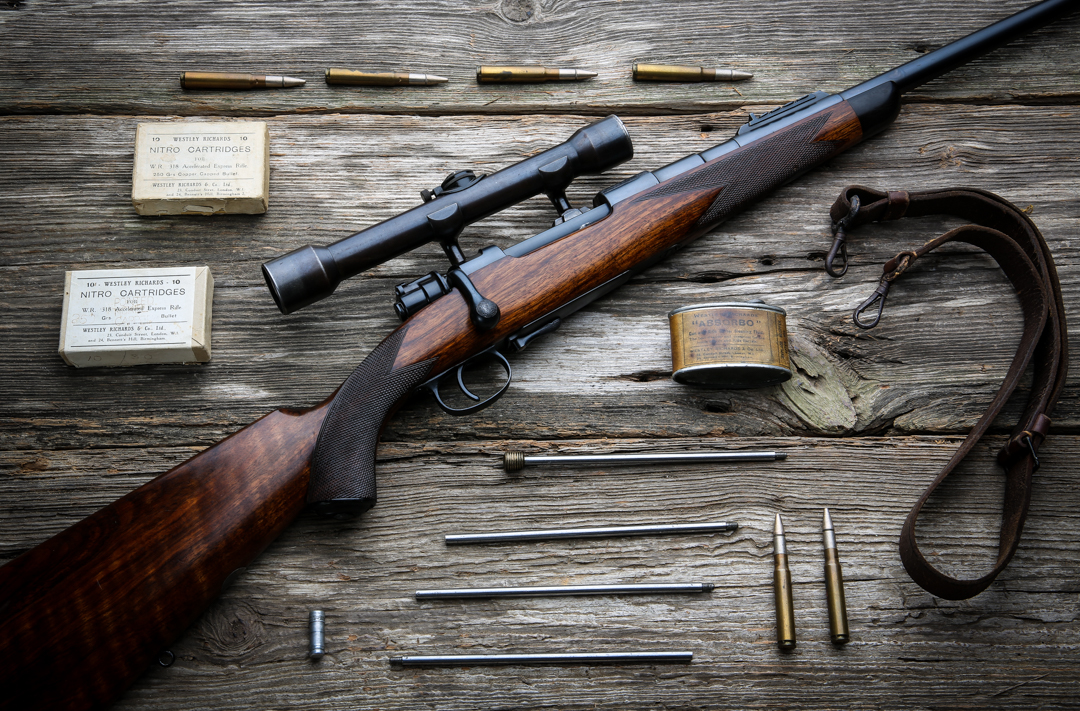 The “special attachments”, or mounts, are integral to the scope and attached to the rifle by a dovetail and cam system. This attachment makes the scope instantly removable without the use of tools while retaining its “zero” when it is replaced. This is an early precursor to the quick detachable scope systems shooters are accustomed to today. 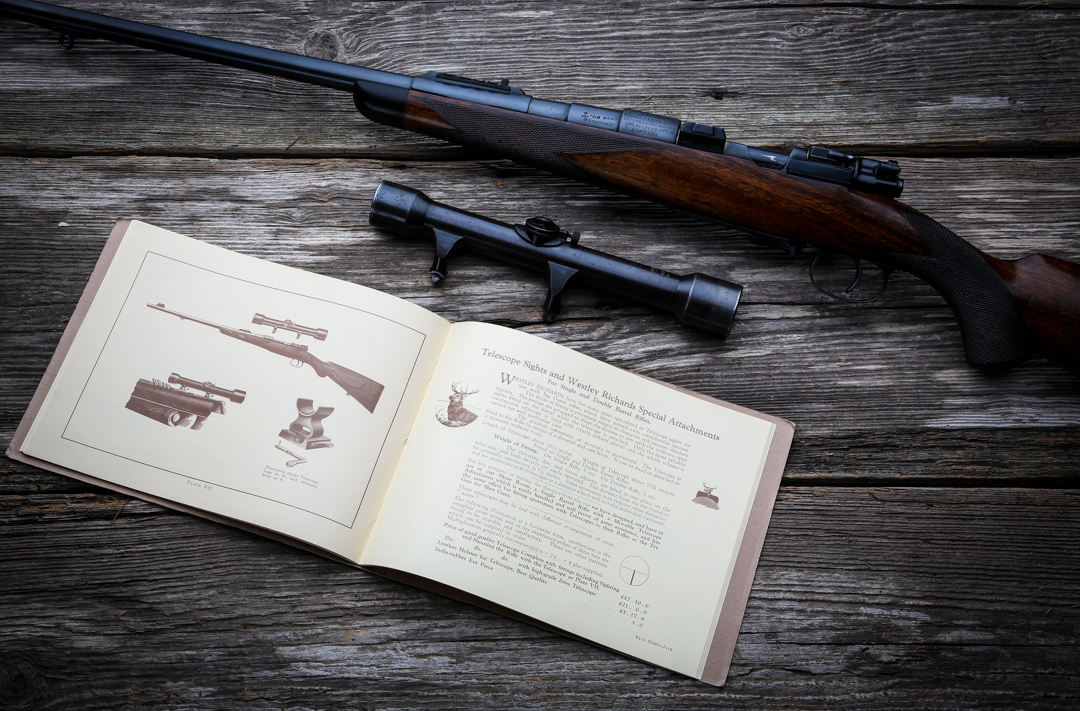 The scope’s mounts were also arranged in such a way that the shooter could use the customary iron sights mounted on the barrel while the scope was attached to the rifle. Illustrations of this type of telescope and mounting system are seen in the firm’s catalogs published between the two world wars. 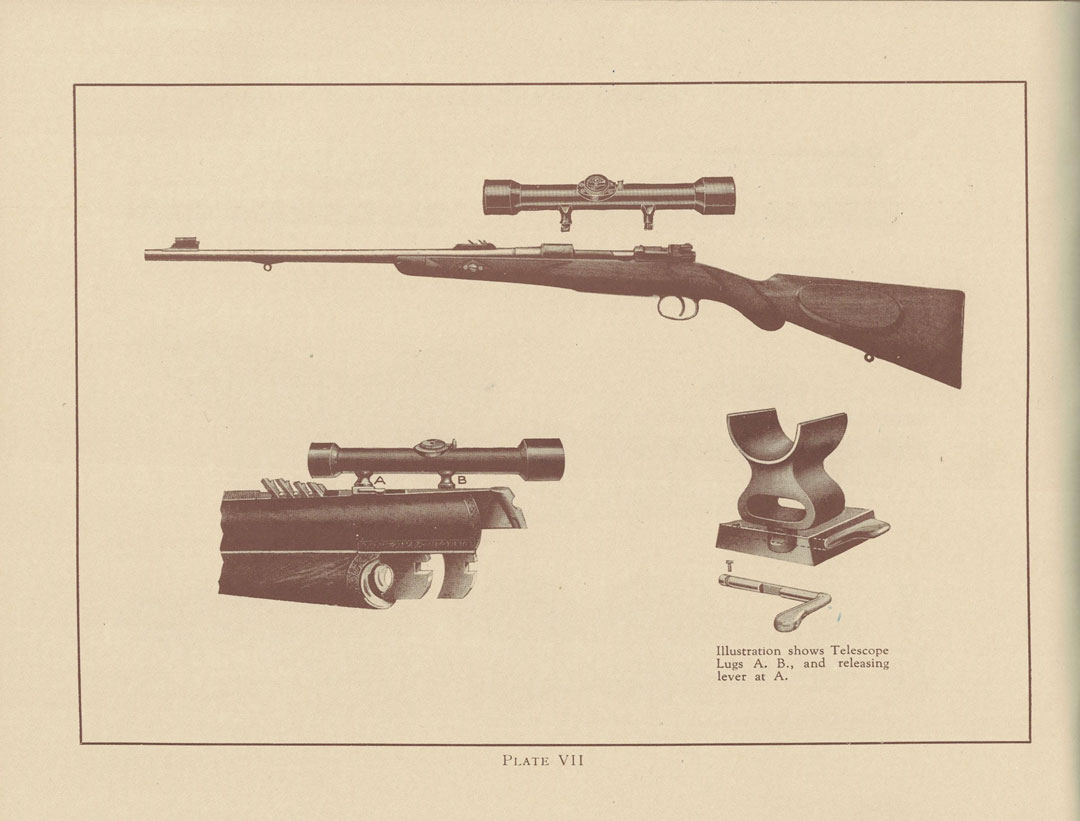 Amazingly complete and original, the rifle still retains much of its original finish and even contains the original take down cleaning rod under its trapped heel plate and its original spare foresight. The foresight is held in the exceedingly rare aluminum canister it was originally supplied in and still nestled in the hollow pistol hand with screw top, as described in the firm’s catalogs from the same period. 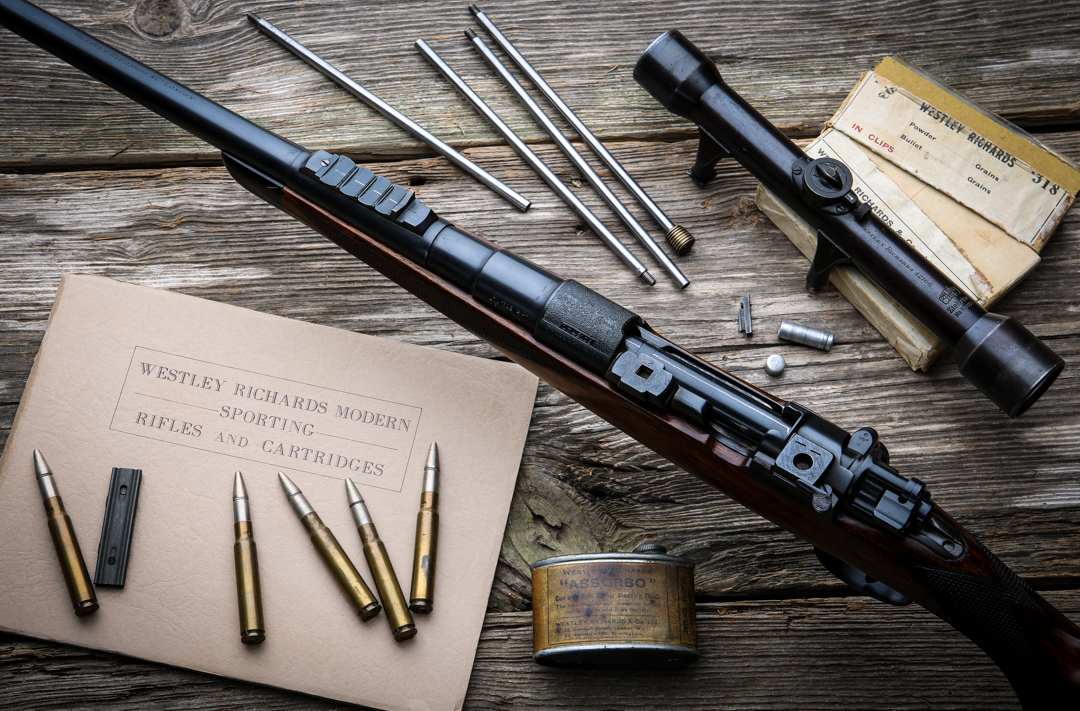 This scope is correctly engraved Westley Richards with the rifle’s serial number on its tube.

This is a rifle I have chased for well over a year that belonged to a reluctant seller. Understandably so, as the rifle was a wedding present to his father from his new wife in 1965. While I am not sure what happened with the rifle between 1929 and 1965, the rifle has remained in the family in which I acquired it from for the better part of 60 years.

The rifle became his father’s companion every autumn when he visited Invercauld Estate in the Cairngorms from the mid 1960’s to the mid 1970’s to stalk stag.
The silver stock oval still retaining the initials of the previous owner, “RBD”. 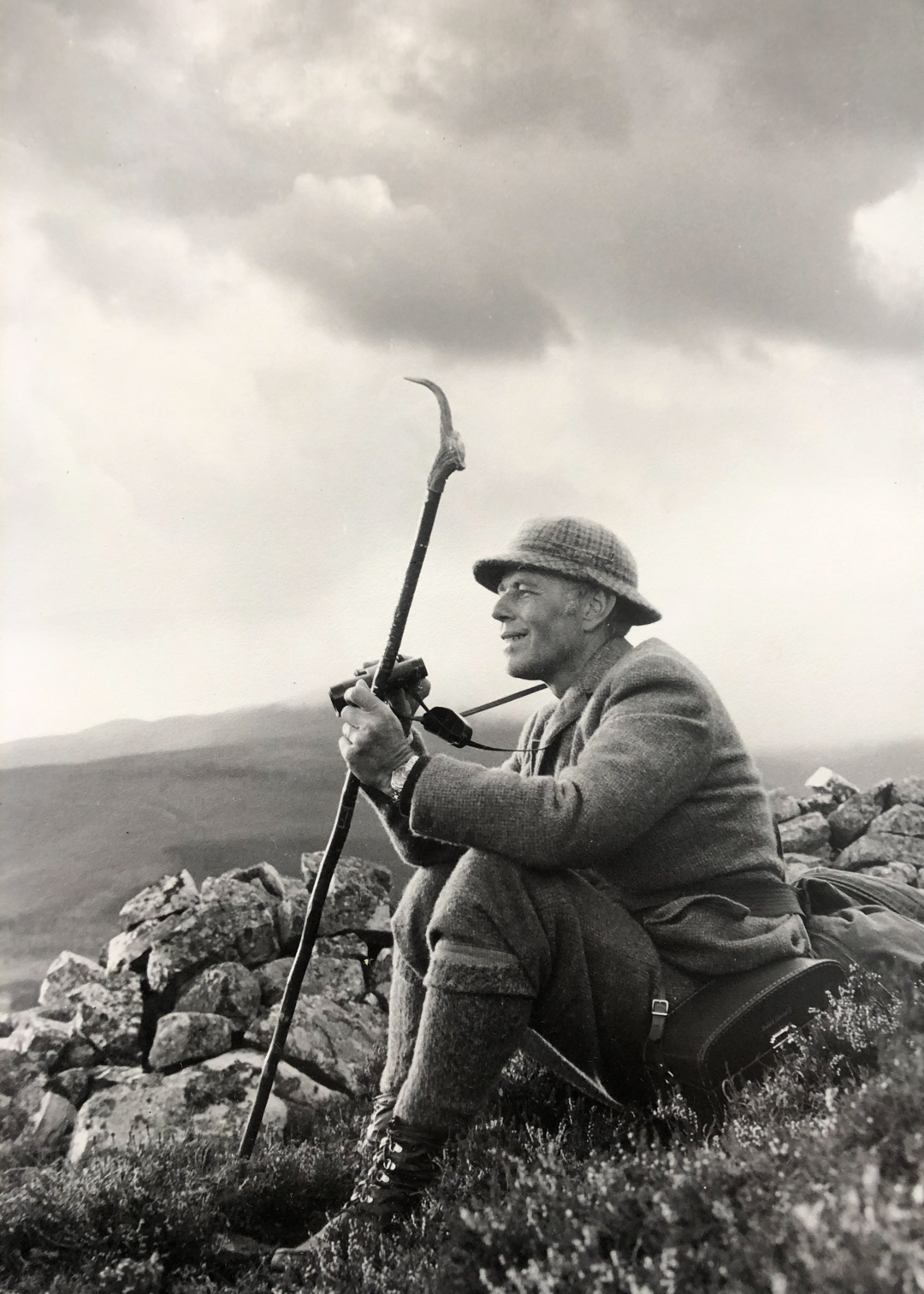 While I know it was hard for the gentleman to give up a rifle cherished by him and his father, the promise of repatriating it to a good home helped me finally get the rifle in my hands. Now it has found a new place to rest with a discerning collector who appreciates not only the rifle’s high, original condition and history, but also the innovation it represented at the time. 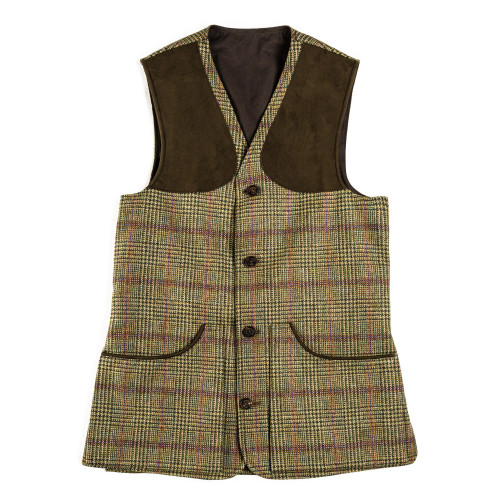 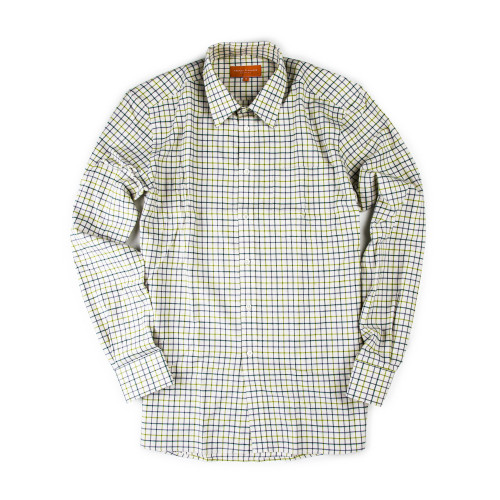 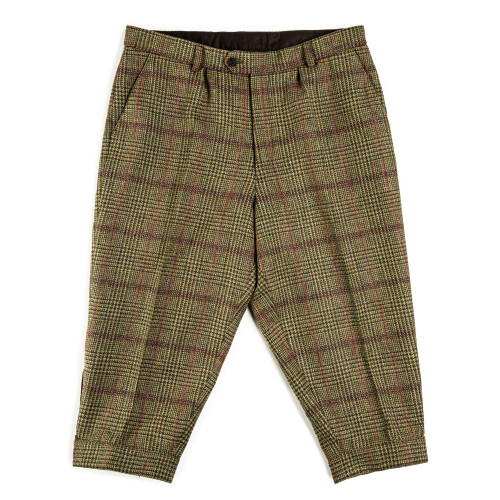 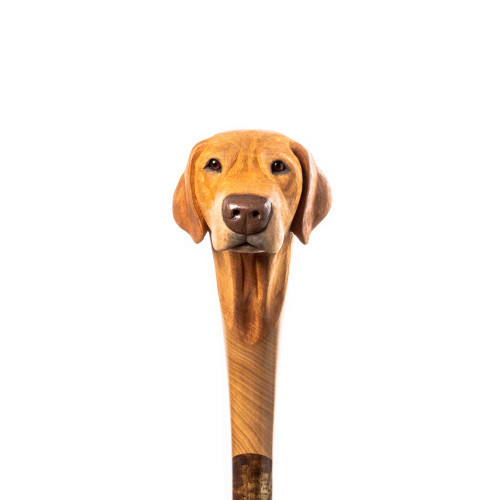