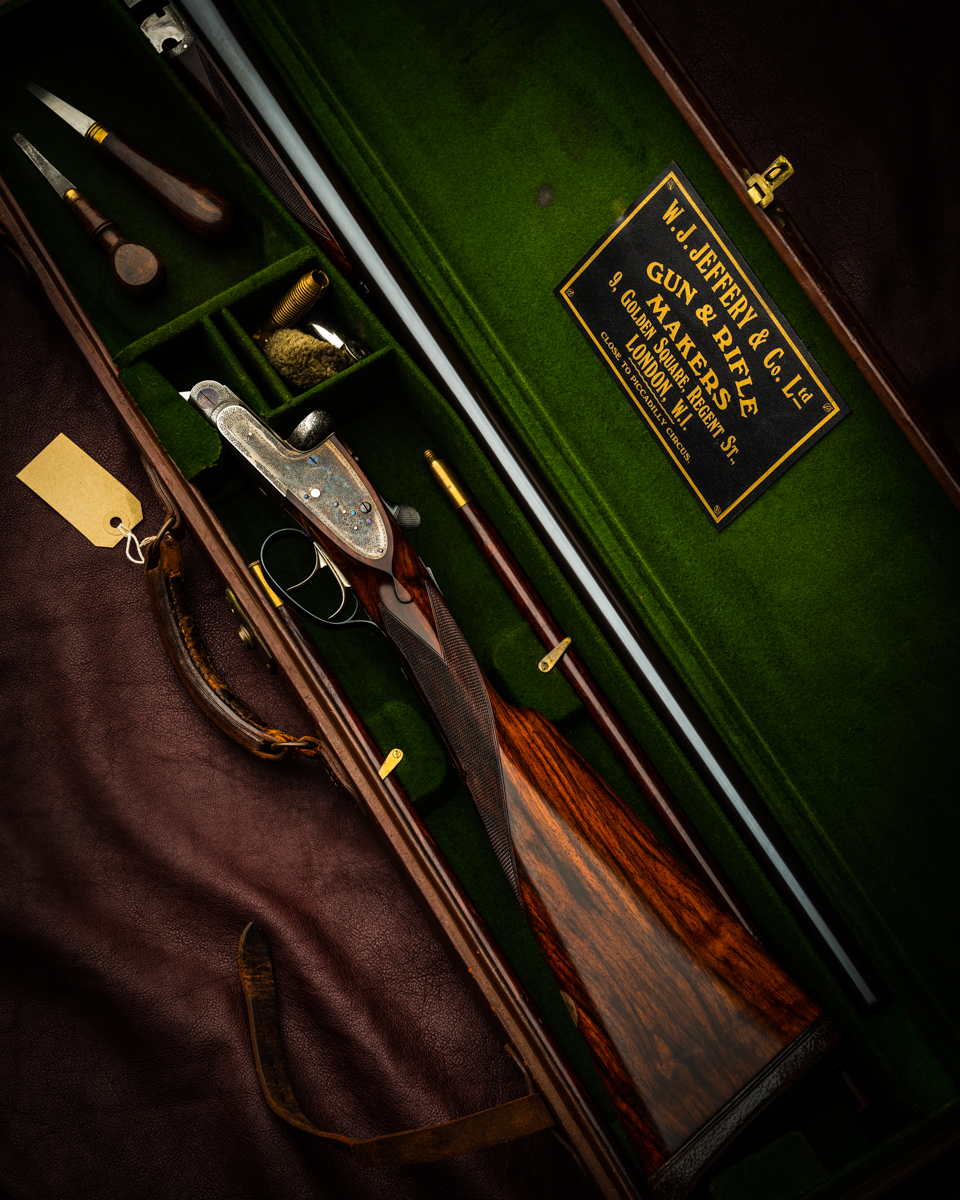 We are often tasked with finding a good quality English side by side ejector, in tidy condition, by our clients for the upcoming season. Something to use on smaller days when double guns are not required or as a more traditional alternative to the modern over and under, a gun they may shoot well with, but lacks the passion and character of a proper English side by side. Finding an English side by side is easy, I hear you say, but not, as our discerning clients would expect, in superb original condition, ready for the season.

The latest used gun to arrive at WR UK is exactly that. A superb W.J. Jeffery No. 3 Model, 12g sidelock ejector in, what can only be described as, first class condition. Completed around 1930, the gun is built on a 7 pin, square body, sidelock action beautifully engraved with two bouquets of roses on each lock plate, both fences, forend iron and a single large bouquet on the bottom of the action, all surrounded by a fine scroll coverage. The action retains nearly all its original case colours and the file up and shape is of real quality. The 28” barrels feature 2 1/2” chambers and are choked 1/4 in the right and 3/4 in the left. The bores read almost as proofed and the wall thickness is .025" at the thinnest point.

The stock measures 14 5/8” to the centre of the leather covered recoil pad and has a bend of 1 1/2” at the comb and 2 1/8” at the heel. The cast measures 1/4” off at the heel and 3/8” at the toe. The splinter forend has the Anson push rod release, forend diamond and engraved tail pipe. Weighing 6lbs 7.4oz the gun comes to the shoulder with ease and is as delightful to handle as it is to look at. Cased in a lightweight, compact, leather case with a set of cleaning rods, snap caps and cleaning accessories. A very beautiful but perfectly usable sidelock for a variety of game shooting. 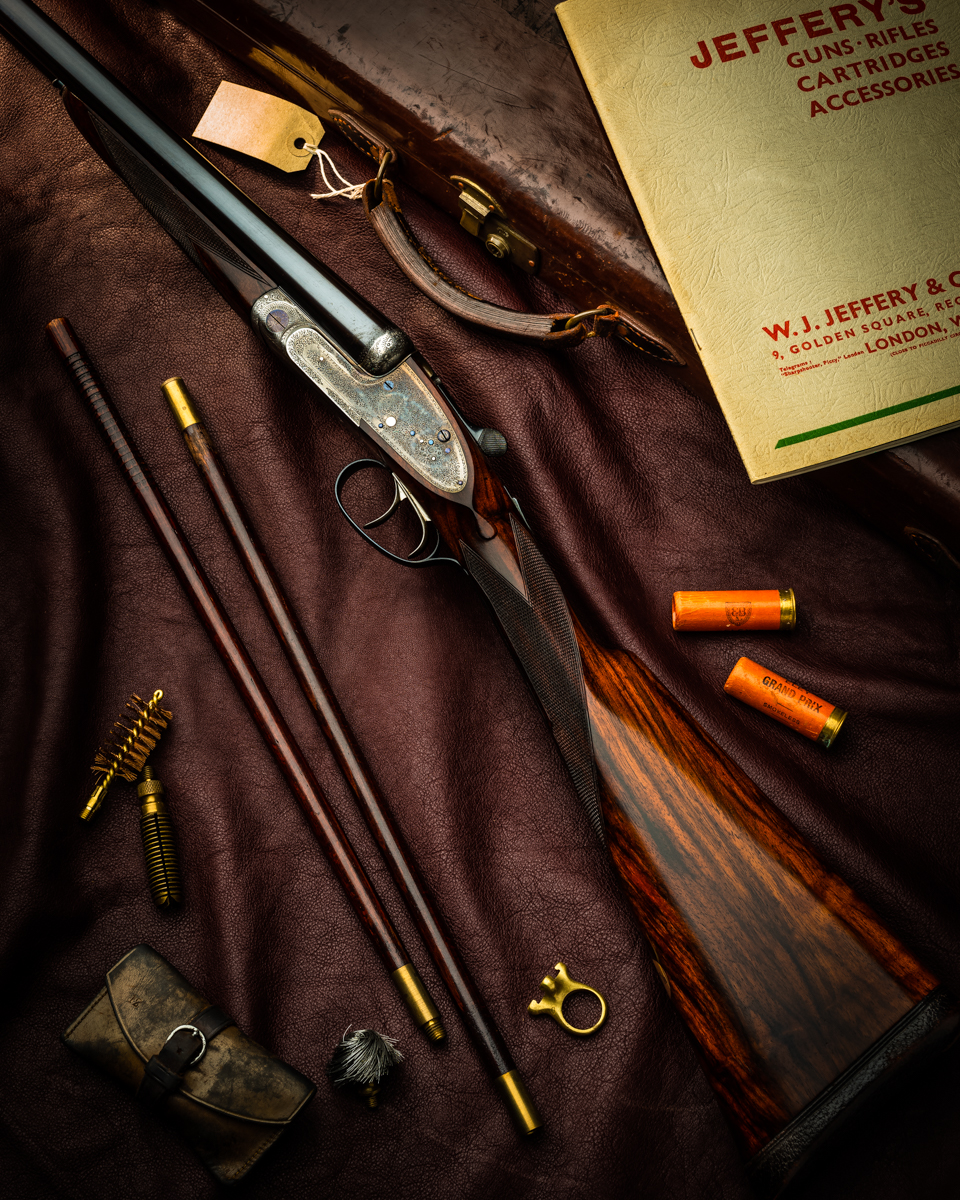 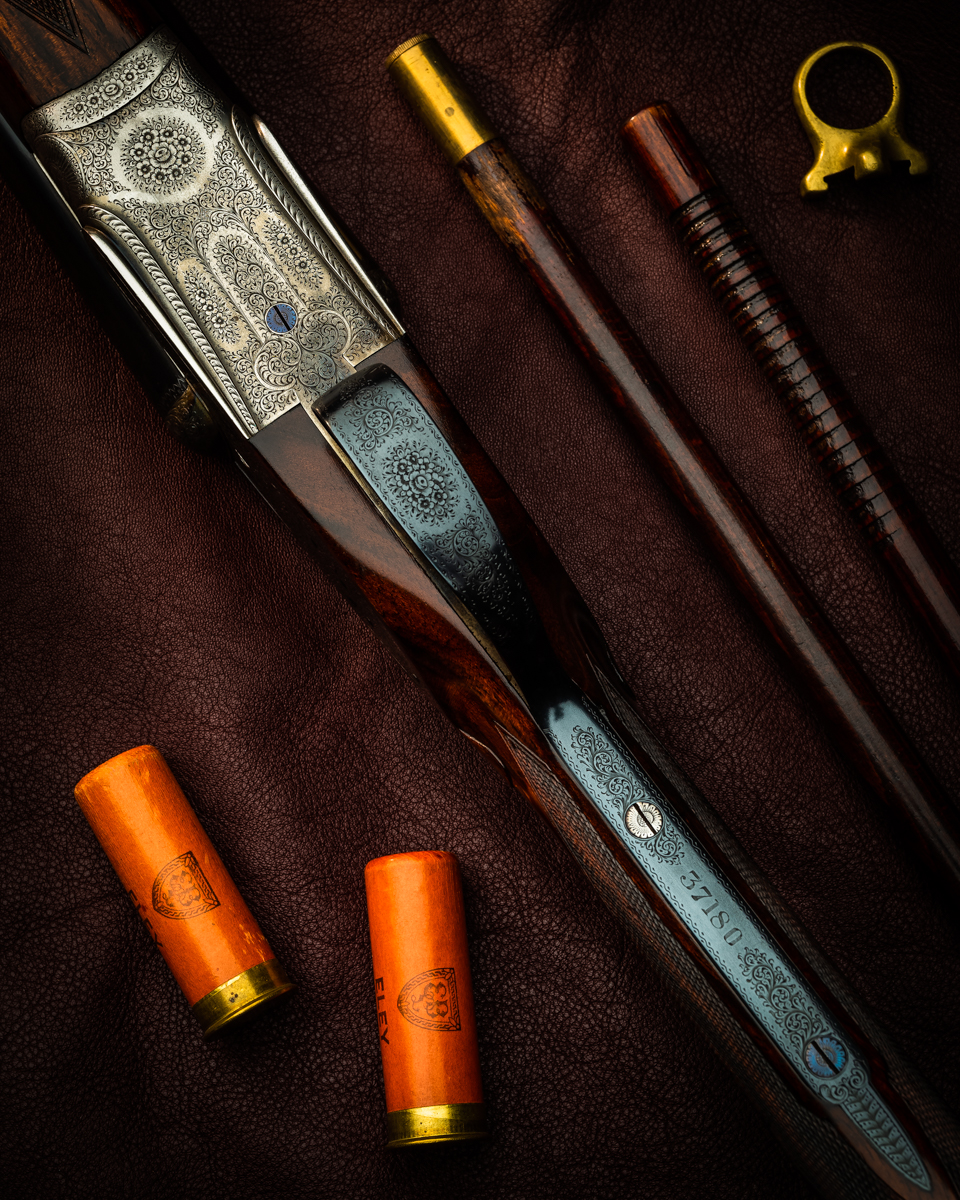 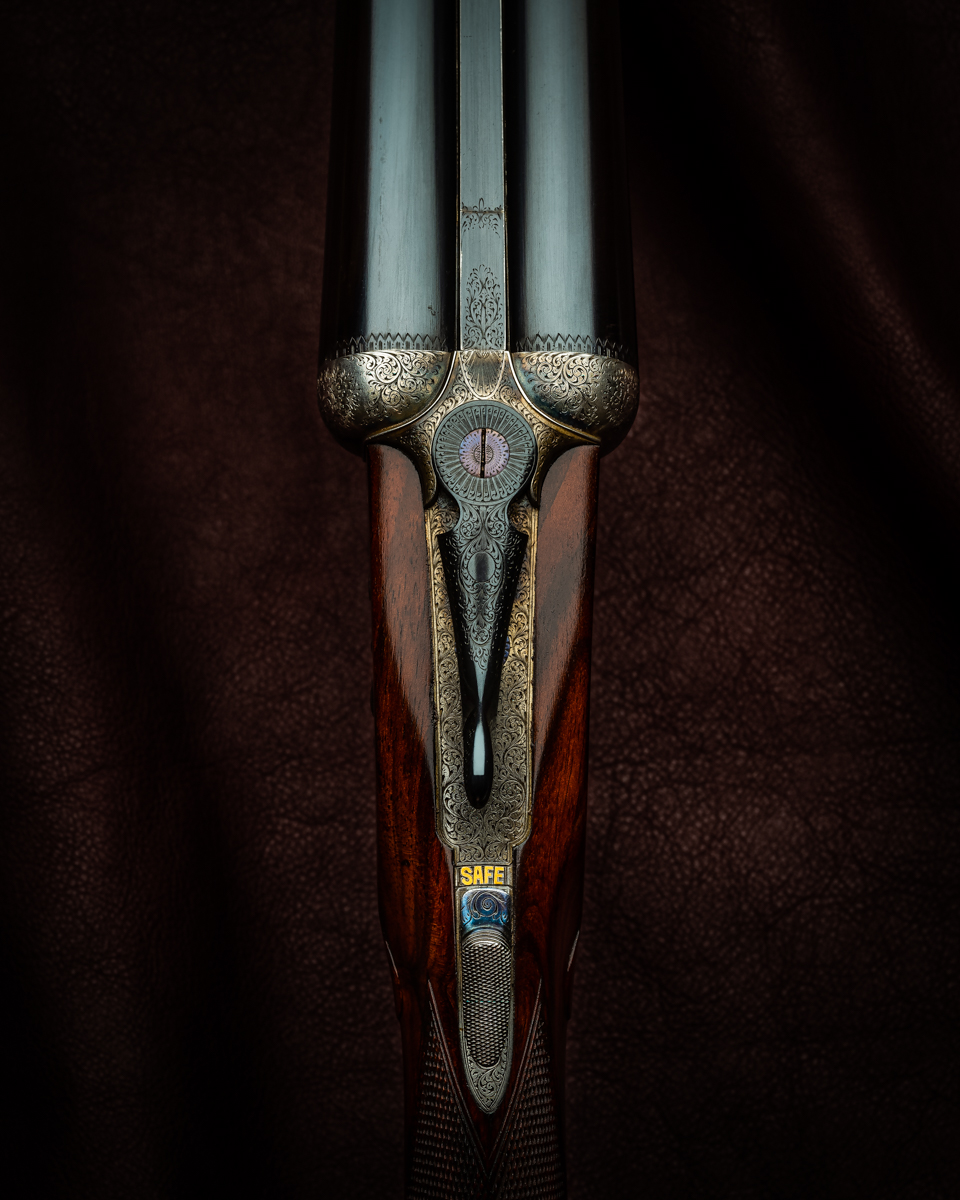 The trade label reads 9, Golden Square, Regent Street, London W1, which matches the engraving on the rib. William Jackman Jeffery died in 1909 and the company was taken over by his brother Charles. His nephew F. Jeffery Pearce took over the company in 1920 when Charles died and saw it through till 1957 when the company was sold to Malcolm Lyell who at that time, also owned the Westley Richards London agency and fishing tackle specialist, Farlows. 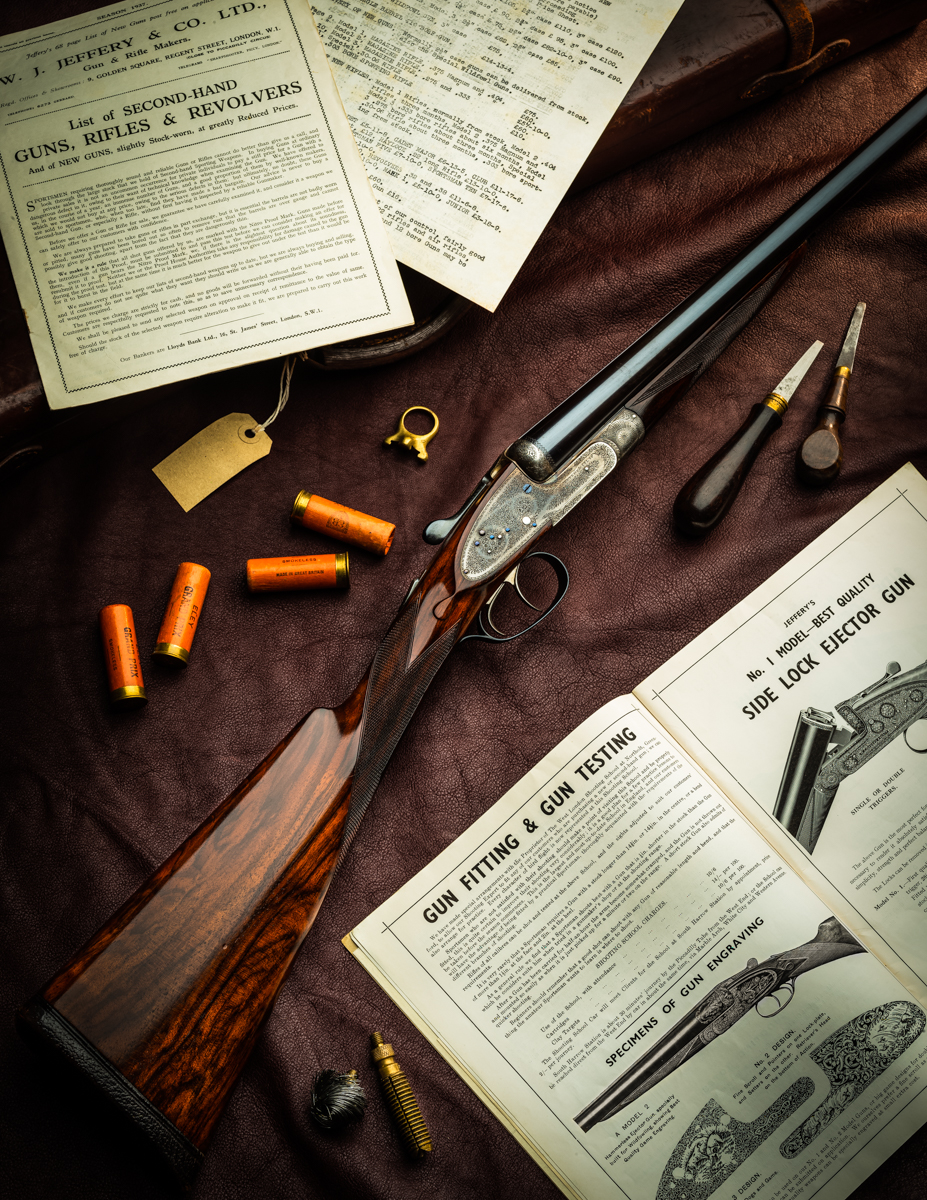 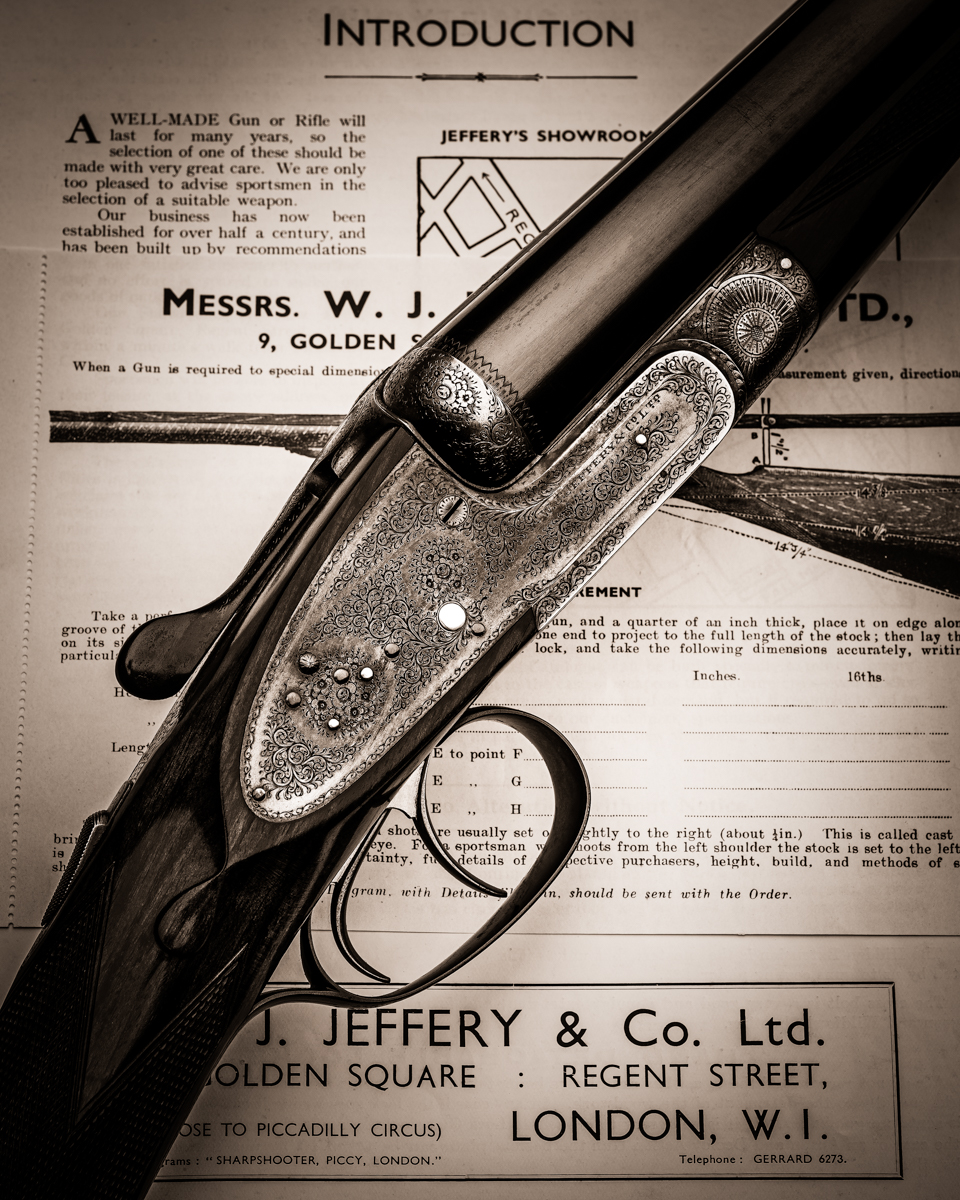 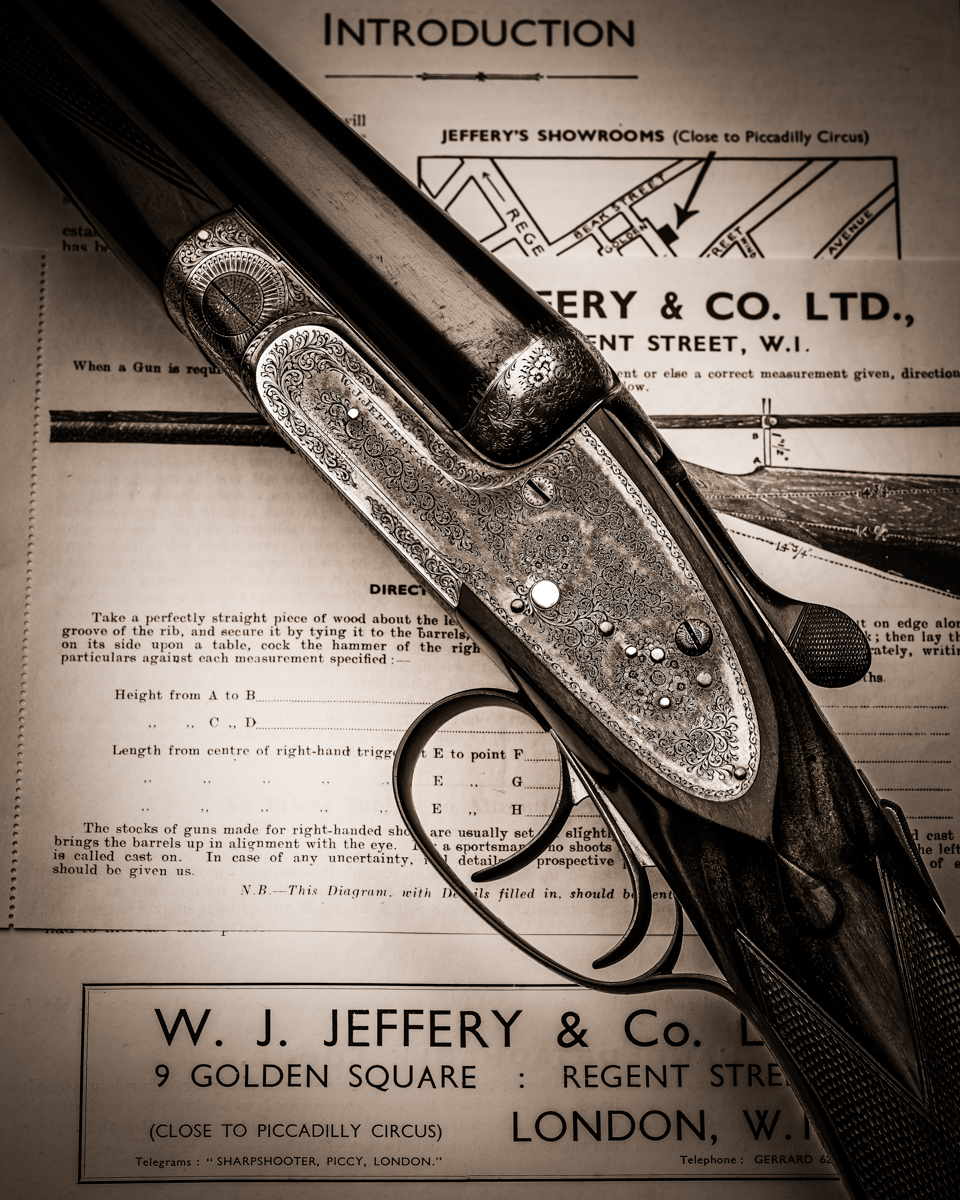 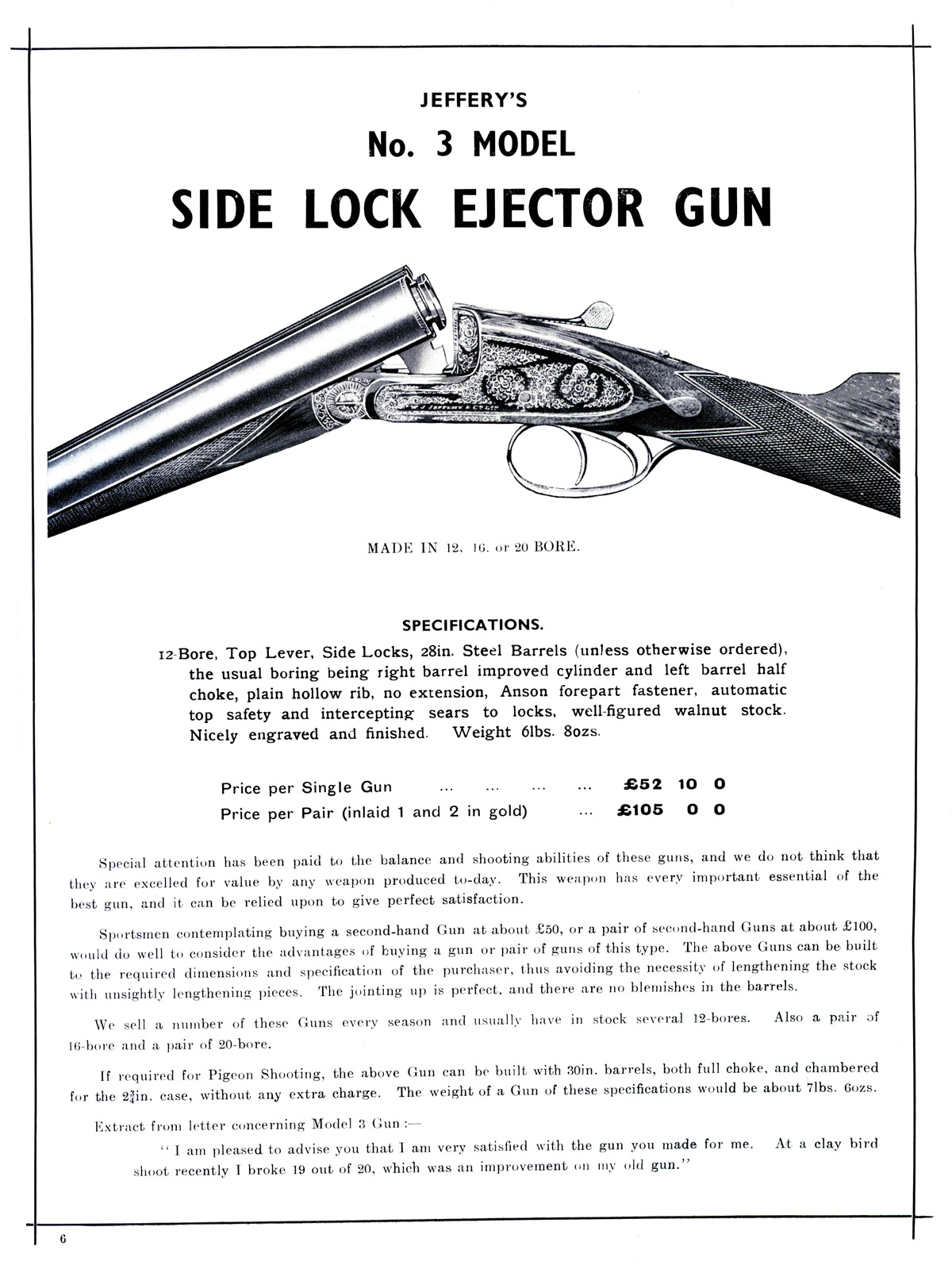 While we would normally associate the name W.J. Jeffery more with rifles, their shotguns, and sidelocks in particular, were of superb quality and this gun would rightfully hold its own against the other London makers of the time.  To quote the Jeffery catalogue of the 1930’s:

“The excellence of our Guns and Rifles is known all over the world, and we claim that for accuracy, soundness of workmanship, durability, and style of finish, goods of our manufacture are unequalled. We make every effort to keep the price of our weapons down to the lowest possible limit consistent with sound workmanship. We can confidently invite a comparison of our prices with any other firm doing the same class of business, feeling sure that this comparison will result in our favour”.

The gun will be on our used gun site shortly. Please contact me direct for any initial inquiries at ricky@westleyrichards.co.uk