The .577 3" Nitro Express remains one of those iconic calibres introduced to the big game world over 120 years ago. One of its greatest proponents was Captain James Sutherland, whose exploits with his Westley Richards .577 are regaled in his classic book The Adventures of an Elephant Hunter published in 1912. An era now long since passed Sutherland's name is now synonymous with one of our most popular luggage offerings.

As calibres go the .577 3" Nitro Express was always a specialist, intended primarily for close range work on dangerous game. Its natural home is in the breech of a double rifle.

Favoured by many of Africa’s professional hunters, today the calibre is mostly found in the armoury of the serious collector. It remains a fascinating relic of a bygone era yet continues to feature in our manufacturing.

Today, the production of .577 calibre rifles by all the major manufacturers combined could be counted in the 10’s at best with one exception, Westley Richards. We built a lot of them.

The rifle you see here as it returned fresh from engraving, is our 100th iteration of the .577 in 120 years and as such marks a landmark in our production. In recognition of this achievement, one of our patrons was kind enough to commission a very special drop-lock double rifle which naturally depicts that greatest of land mammals; the African Elephant, the .577s ultimate quarry. 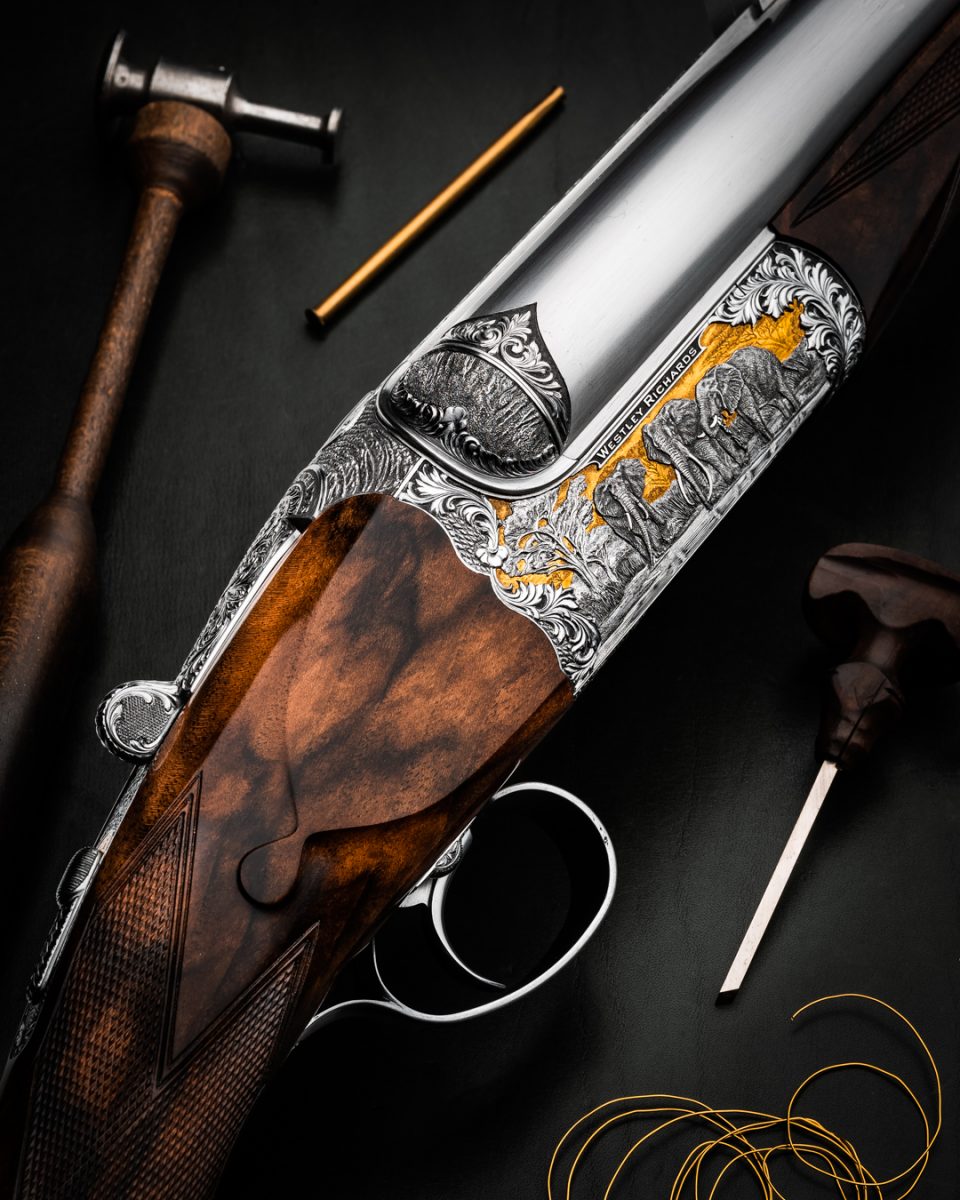 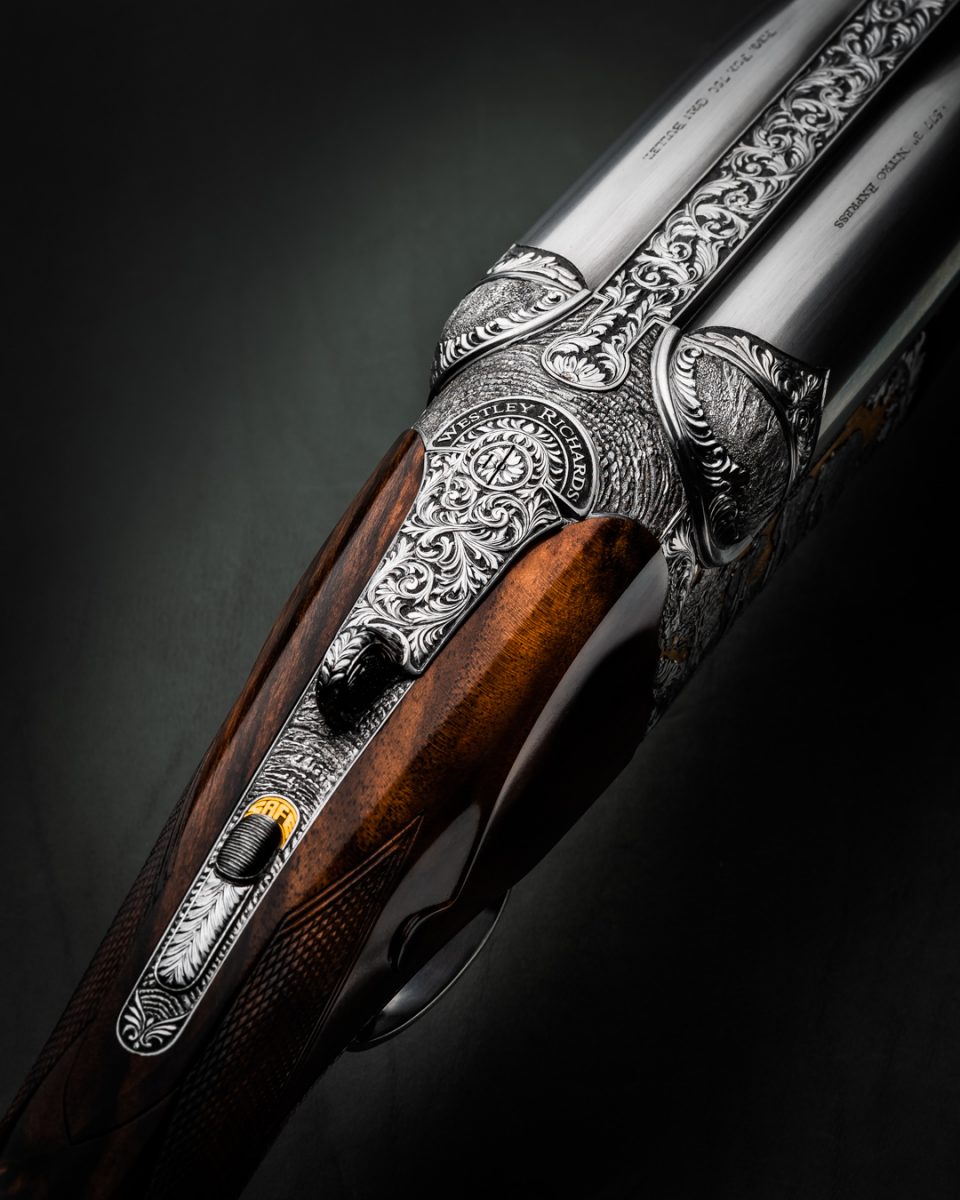 As a base rifle you could not ask for better. Then we turn to the engraving. 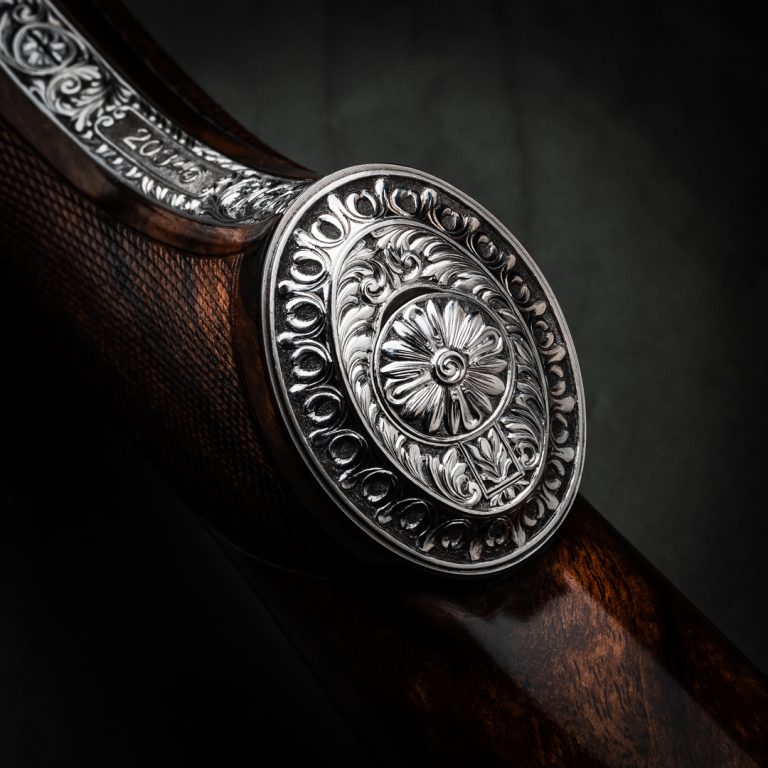 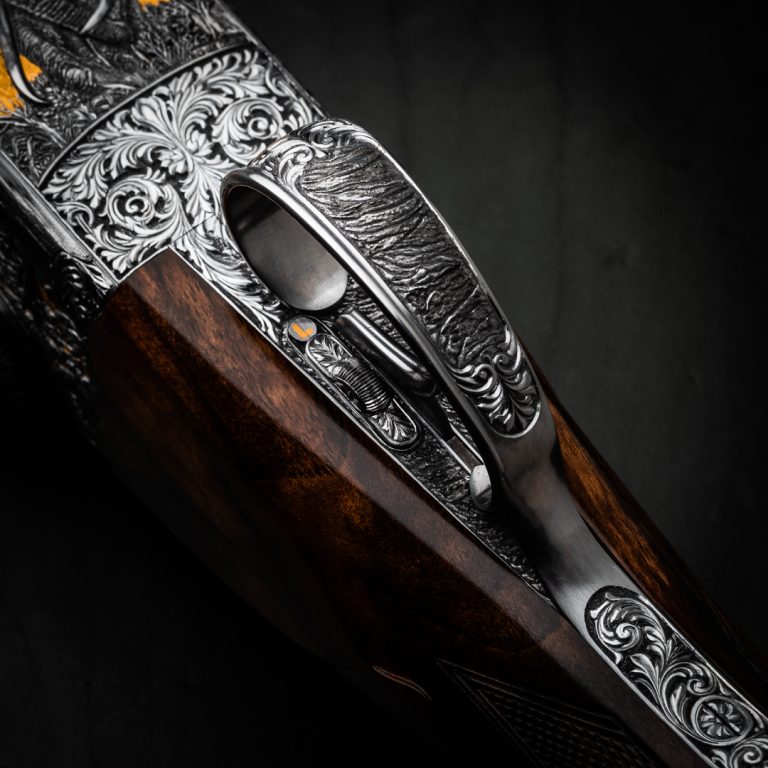 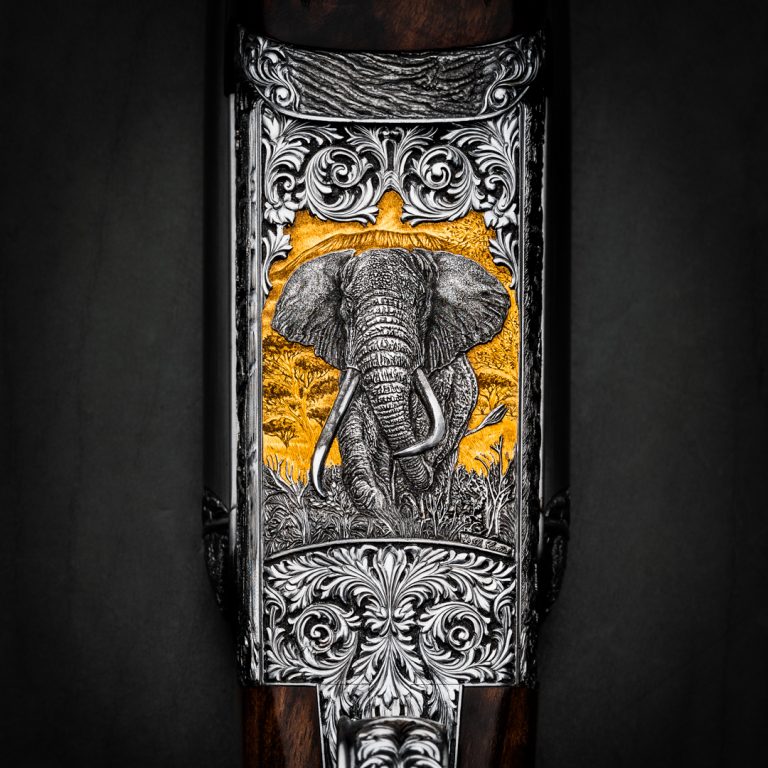 Executed by Dario Cortini who works out of his studio in Italy, the rifle depicts three scenes of the African Elephant. The actual engraving is a mixture of deep carving, elaborate scroll work and gold inlay. Masterfully executed, the actual texture of an elephant’s skin is cleverly used as a partial coverage theme throughout the rifle, something never before applied to a Westley Richards rifle. 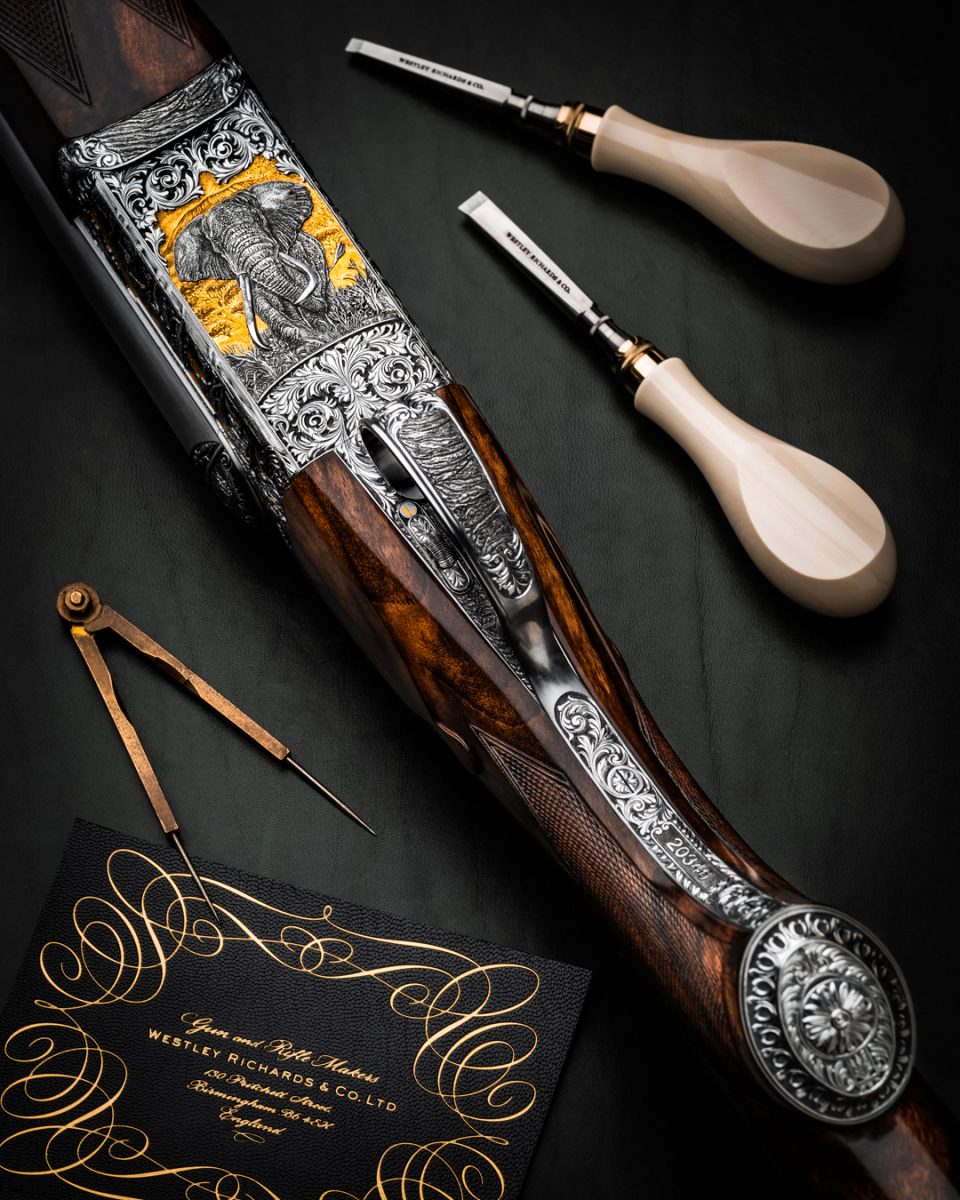 We hope you can appreciate the craftsmanship that has gone into manufacturing this masterpiece and that the skills necessary to do such magnificent work are still alive and well at Westley Richards.

The following photographs update the project, having been taken soon after finishing. 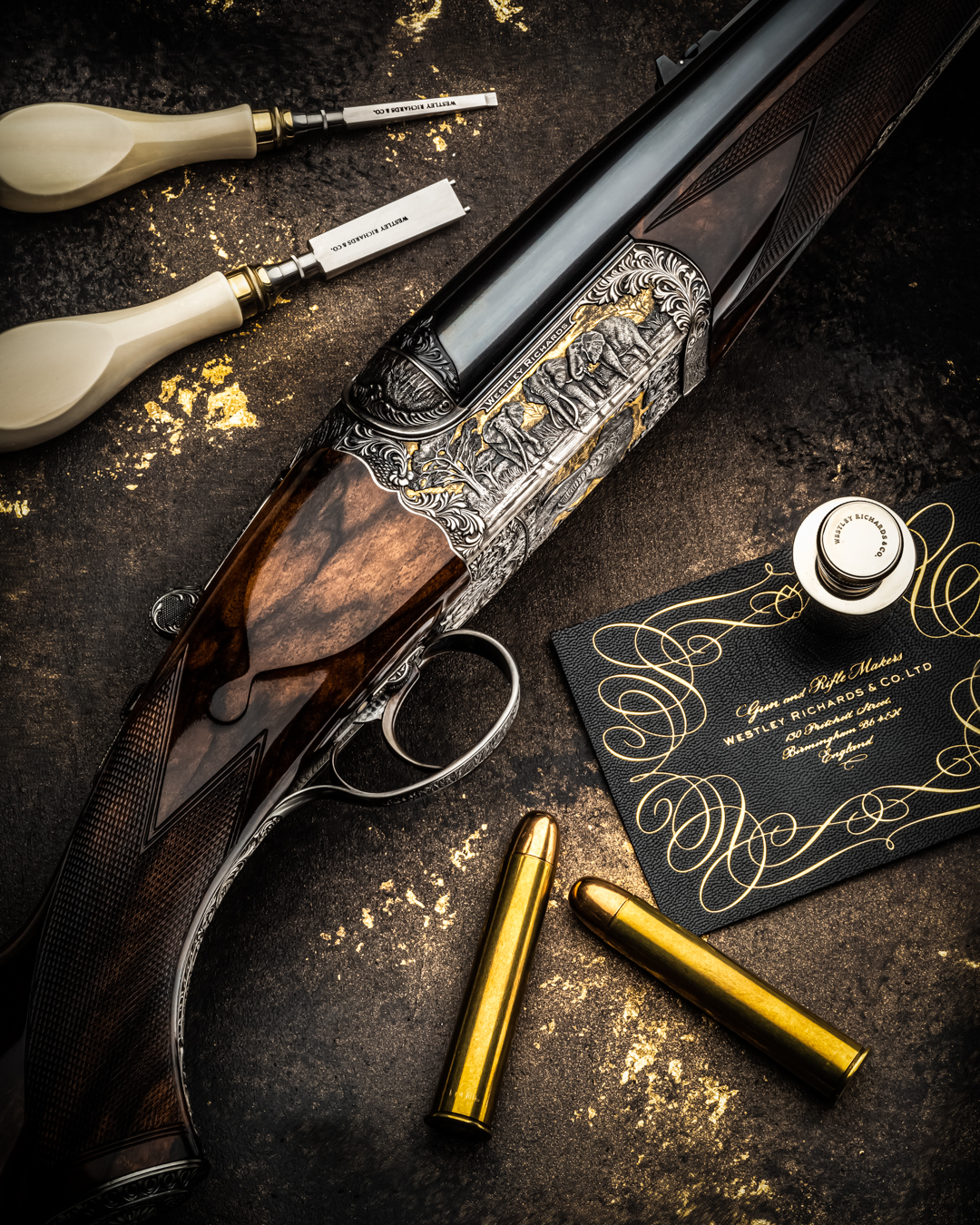 In its finished state, the beauty of the wood and the perfect shapes leading from the head, through the drop-points into the grip, with faultless chequer lines enhancing the almost jewelled quality of the carved steel and inlaid gold. Shape is as important as quality when achieving a svelte look on rifle as brutal as a .577. Note the alignment of top-lever, drop points, bow-shaped action back and carved detail on the breech ends of the barrels.

Along with the graceful flow of line from trigger guard to grip-cap and the rounded forward-looking profile of the knuckle, engraved seamlessly through the forend iron to visually extend the bar into the forend wood, these refinements smooth the boxlock action's essential frame and impart subtlety, giving the rifle a litheness that belies its great strength. 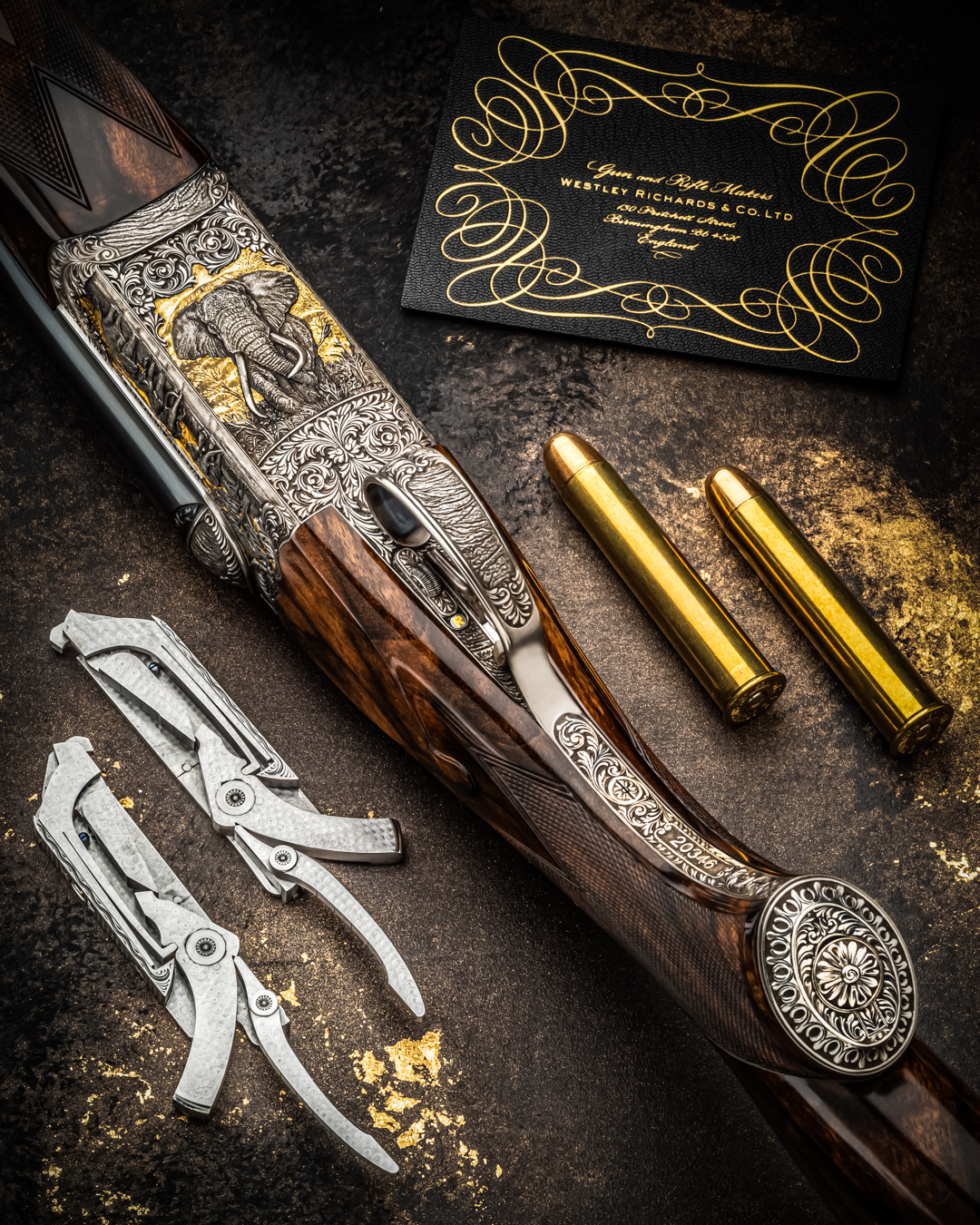 The detachable locks are fully jewelled, protecting the steel from damp and moisture ingress. Historic examples of our rifles prove that treated this way they remain without blemish for a century, even when subjected to the rigours of Africa or India.

As with all our exhibition grade rifles, every detail is made as exactingly as if we expected it to be used ruthlessly in the worst of conditions. There is no compromise in the mechanical detailing or shooting qualities of these rifles. Though we know the chances of a rifle like this being packed for safari are practically zero, if necessary it could be relied on just as well as any Westley Richards ever made, should the need arise. 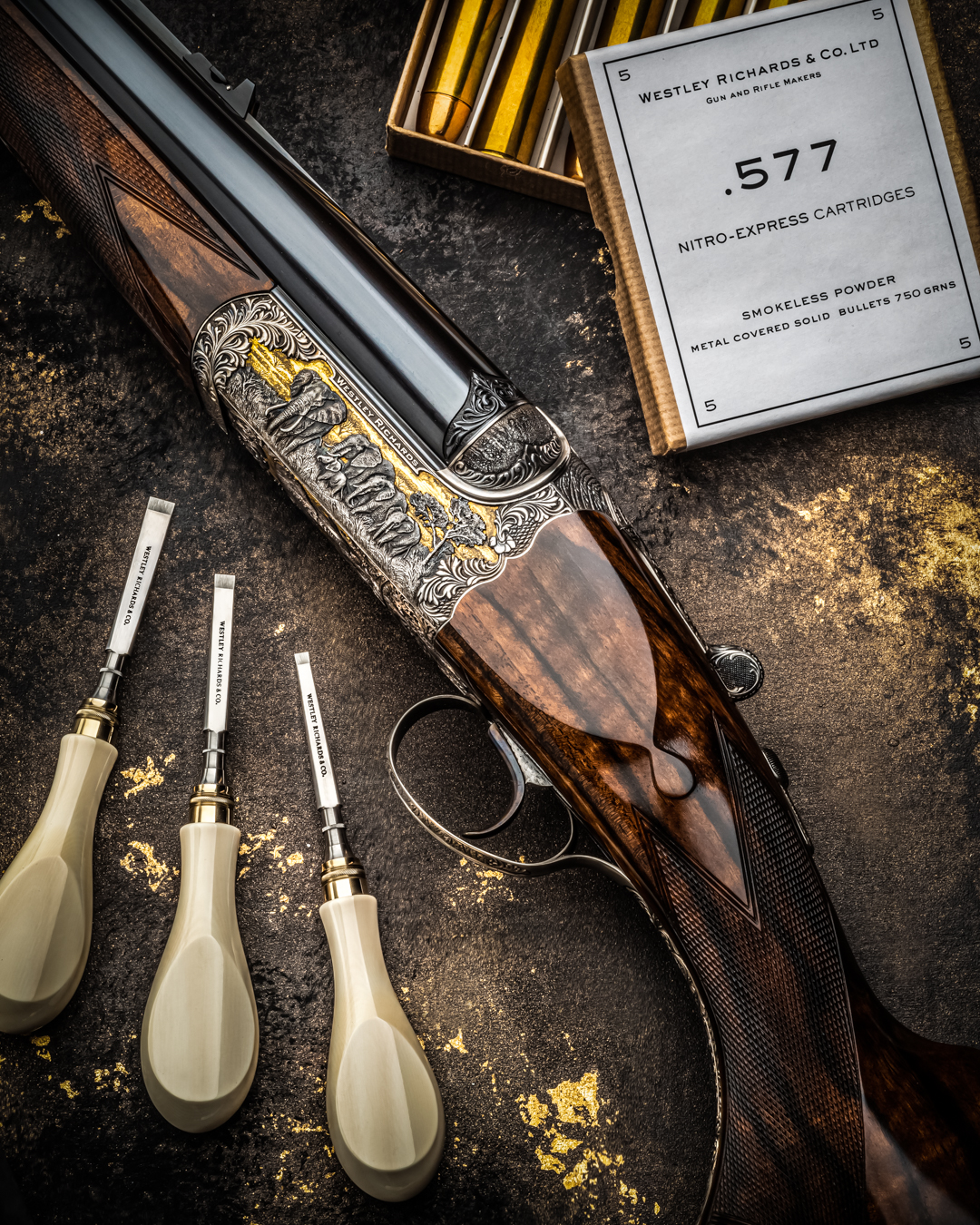 The gold and steel complements the honey-flecked walnut of the stock and the deep black of the barrels. A set of bespoke turn-screws forms part of the accompaniment of tools and accessories that will adorn the case. 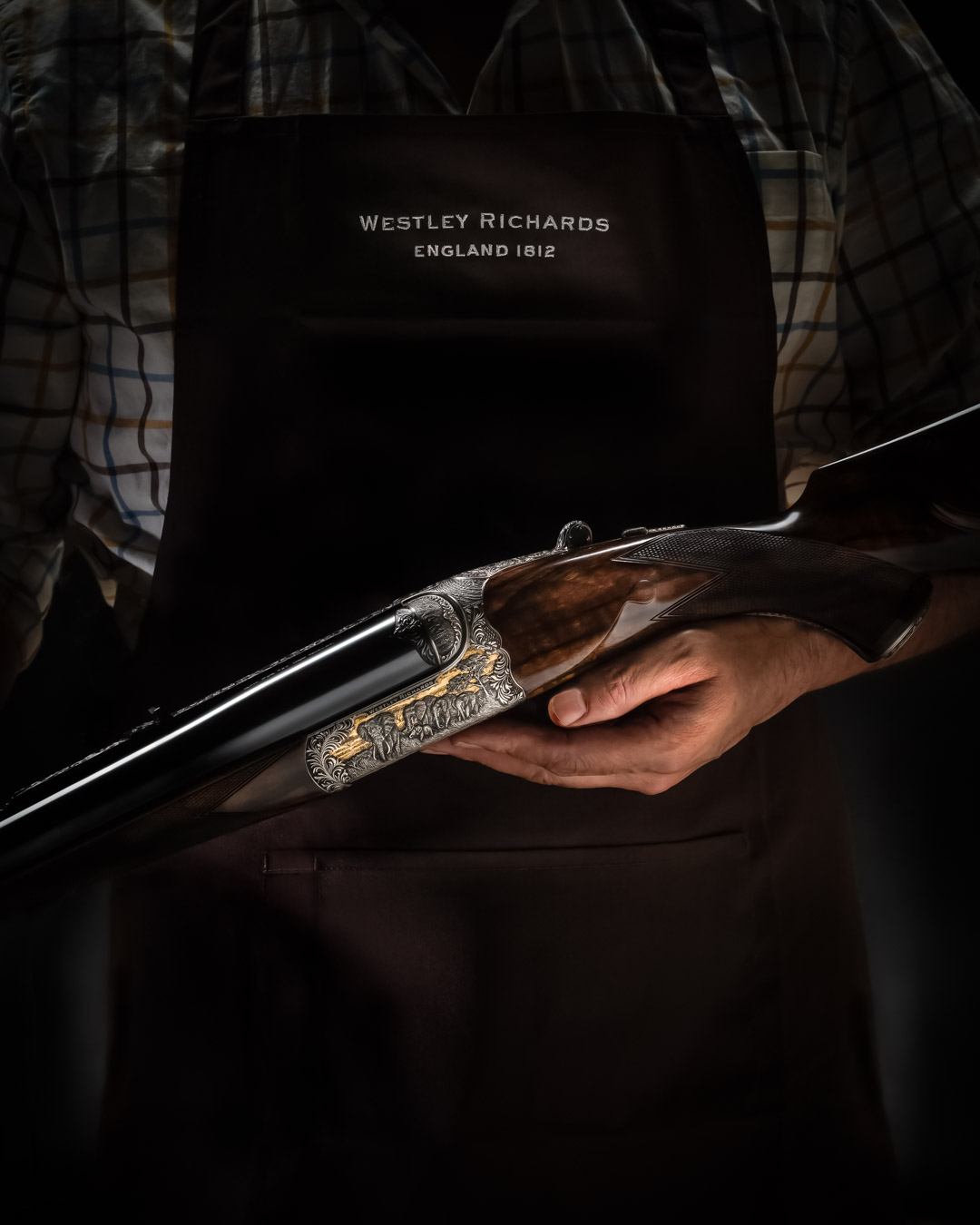 As it leaves the bench for the last time, the one-hundredth Westley Richards .577 serves as a statement of what we as a company can build when orders dictate the exceptional.

It is a fitting milestone that sportsmen in years to come will hold up as testimony to what the Birmingham gunmakers of the first quarter of the twenty-first century were capable of executing. It is not a finale.

We all hope that when the two hundredth Westley Richards .577 is ordered, a century from now, Africa is still graced by the elephants which adorn this rifle, that sportsmen and conservationists continue to ensure they are hunted ethically and that the romance of hunting wildest Africa is a sport our great, great grandchildren can enjoy, as we have.