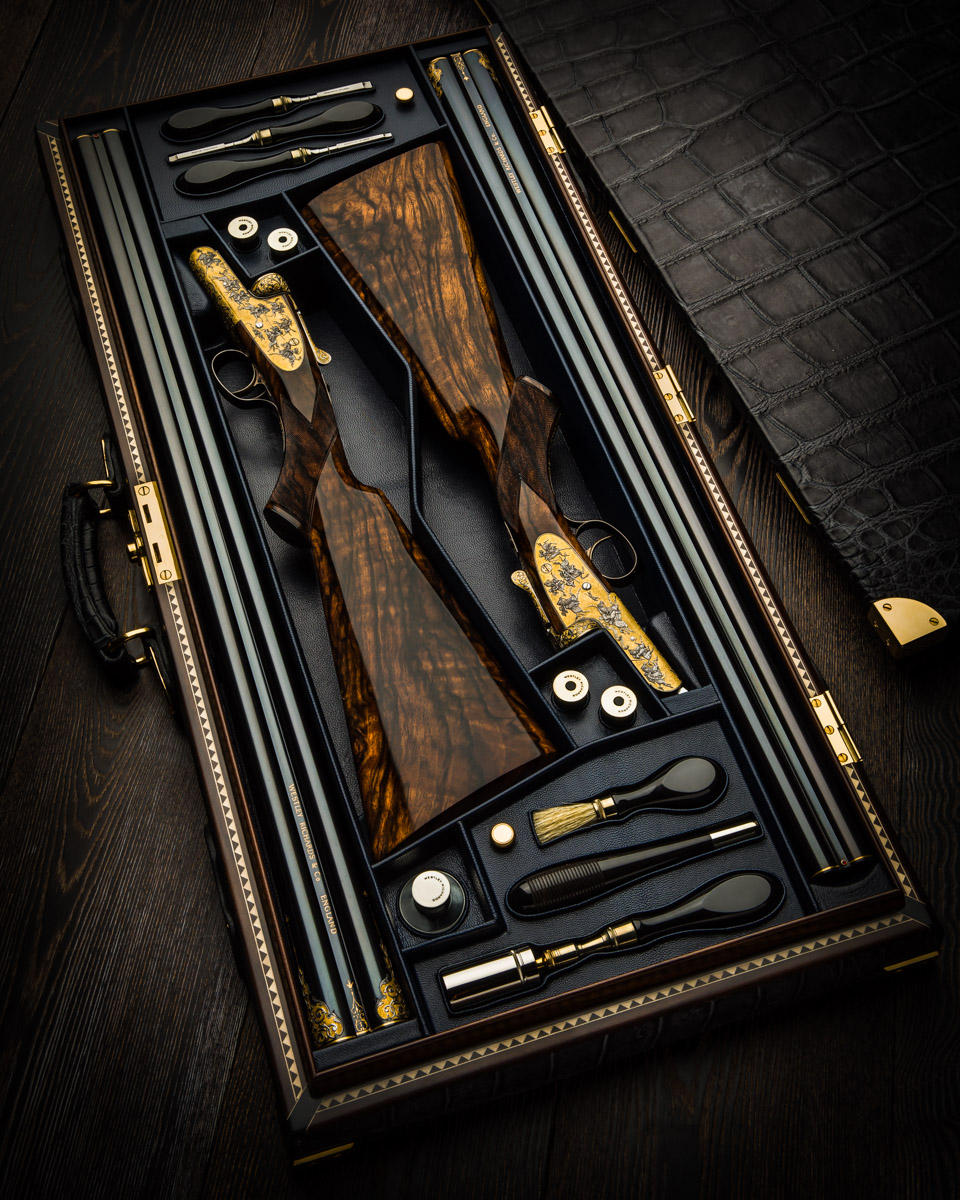 The application of gold on traditional sporting arms—and especially on British examples—is a very easy thing to get wrong. Recall that the aesthetics of Britain’s classic designs, their shapes, their lines, their engraving, evolved during an age and in an empire where ostentatious decoration on firearms was generally frowned upon.

In English Guns & Rifles, J.N. George’s fine 1947 treatise on the evolution of British sporting arms, the author noted a trend evident by the late 18th Century—“a marked tendency toward greater simplicity of form, combined with the abolition of all kinds of ornament which might impair either its utilitarian value or its appearance of neatness and smooth finish, began to be apparent in all forms of the sporting gun.” 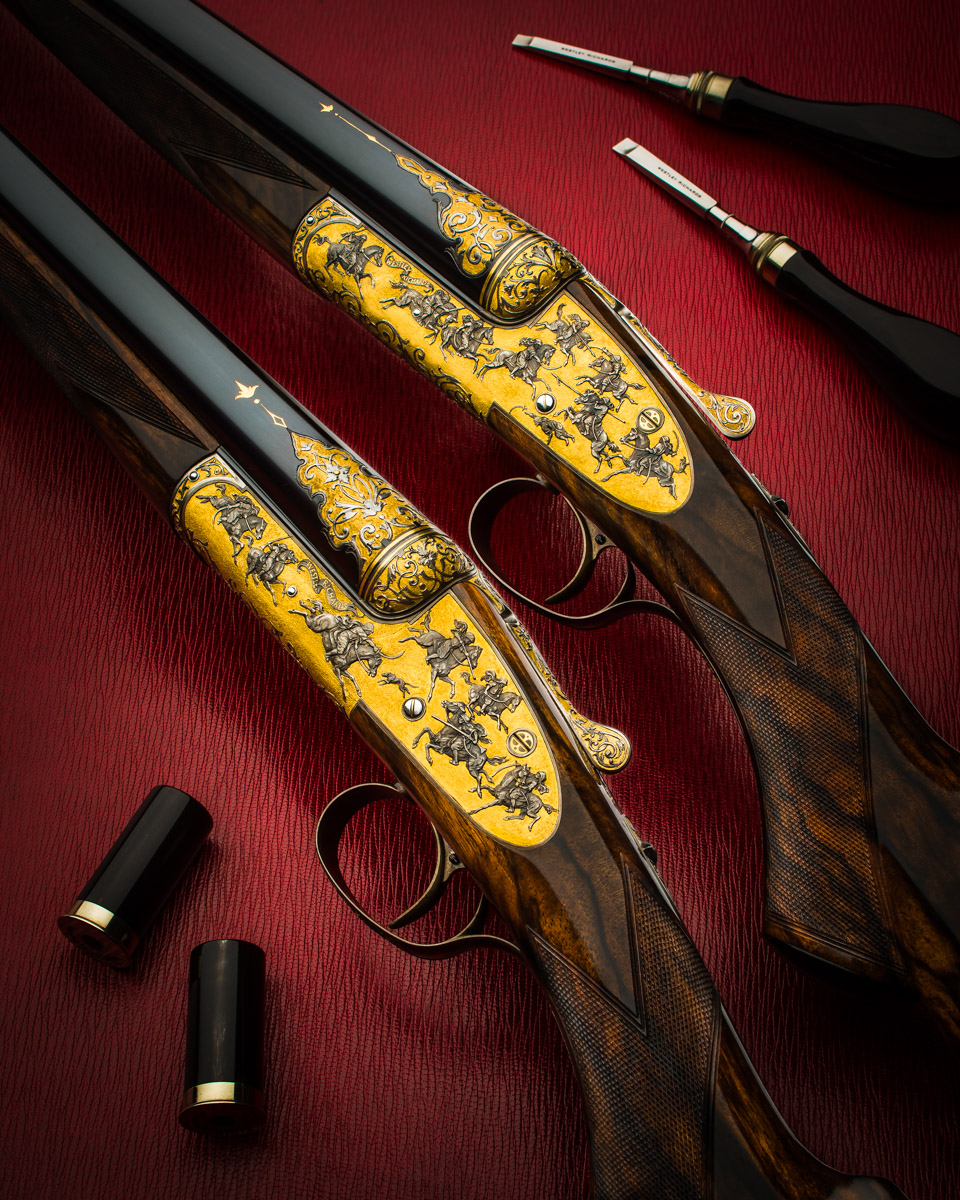 Broadly speaking these strictures dominated British gunmaking, and British gun engraving, throughout the 19th Century and well in to the 20th. Lavishly embellished outliers, with some exceptions, are most notably the guns and rifles made for the princes of India and the royalty of the East, to whom Westley Richards was a favourite gun and rifle maker.

By its nature, gold—in all its flashy, sometimes heavy opulence— can readily overwhelm the spare elegance and quiet lines of a traditional English firearm, and often does when applied—unless the applicator has not only hands of great technical virtuosity but also the eyes of an artist and an aesthetic taste congruous with the object to be engraved. 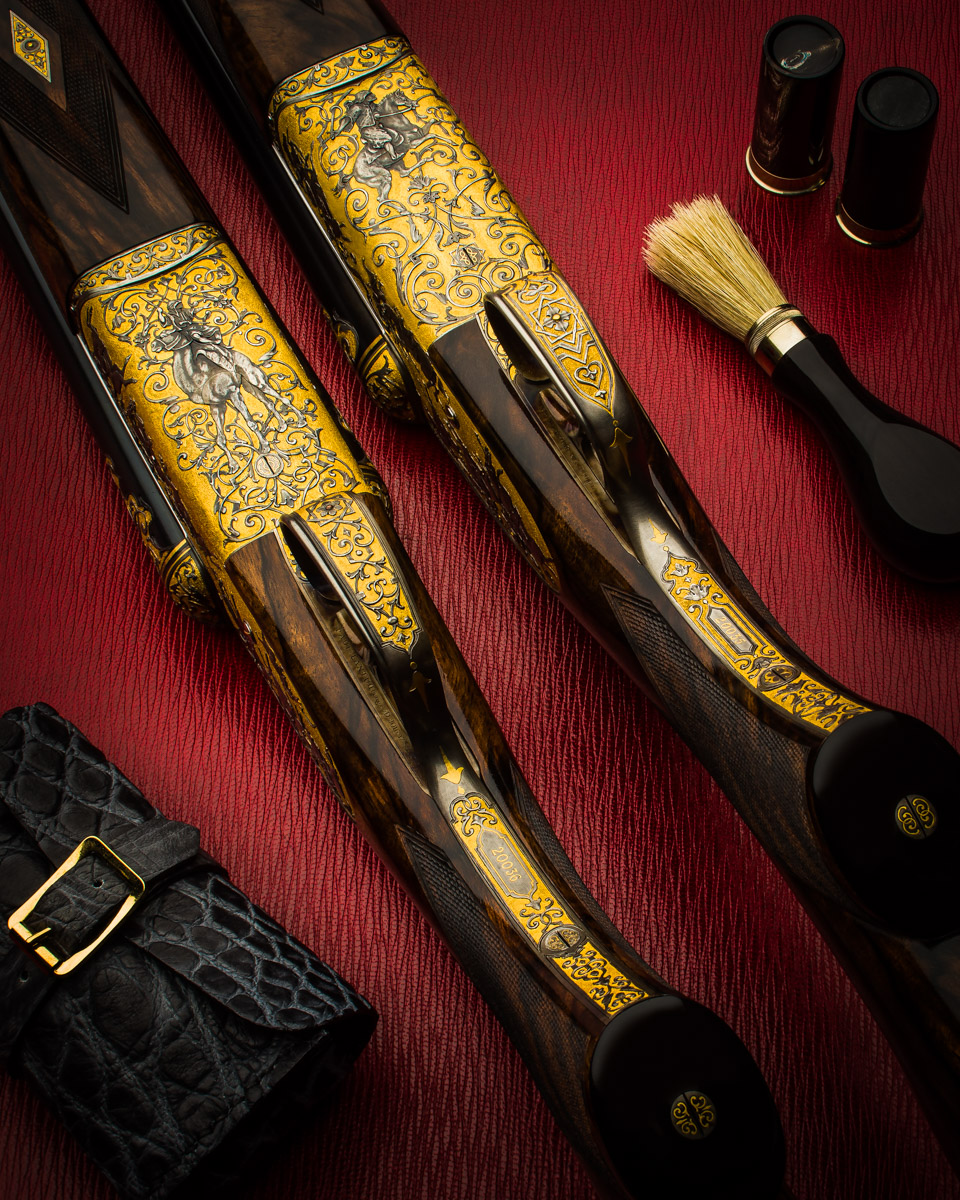 As his gold inlays and the bejewelled engravings on the India Rifle (2013) and the Africa Rifle (2016) illustrate, Lithuanian-born and America-based Paul Lantuch possesses each of these talents. This spring, after 6 1/2 years in the making, Lantuch completed the 'Arab Warrior Guns', a pair of sidelocks, the third and fourth examples of the largest, most expensive, and the most elaborate commissions that Westley Richards has placed with an engraver since the Boutet Gun of the 1980s, engraved by Alan and Paul Brown.

The pair, 12-bore rounded-body sidelocks, feature panoply of carved Arab warriors with interwoven Arabesque ornamental motifs against a full background of inlayed, stippled gold. Built for a member of Qatar’s royal family, there is more precious metal on display on these guns than at Fort Knox, but … but—and I say this as a conservative rose & scroll purist—the effect is sumptuous, certainly regal, but not gaudy, nor garish. That is because Lantuch’s design effectively integrates the figures and ornaments in with the gold in a manner so that no one element visually dominates another, nor does the gold crush the fine lines of the canvas—which is, after all, a traditional British shotgun. 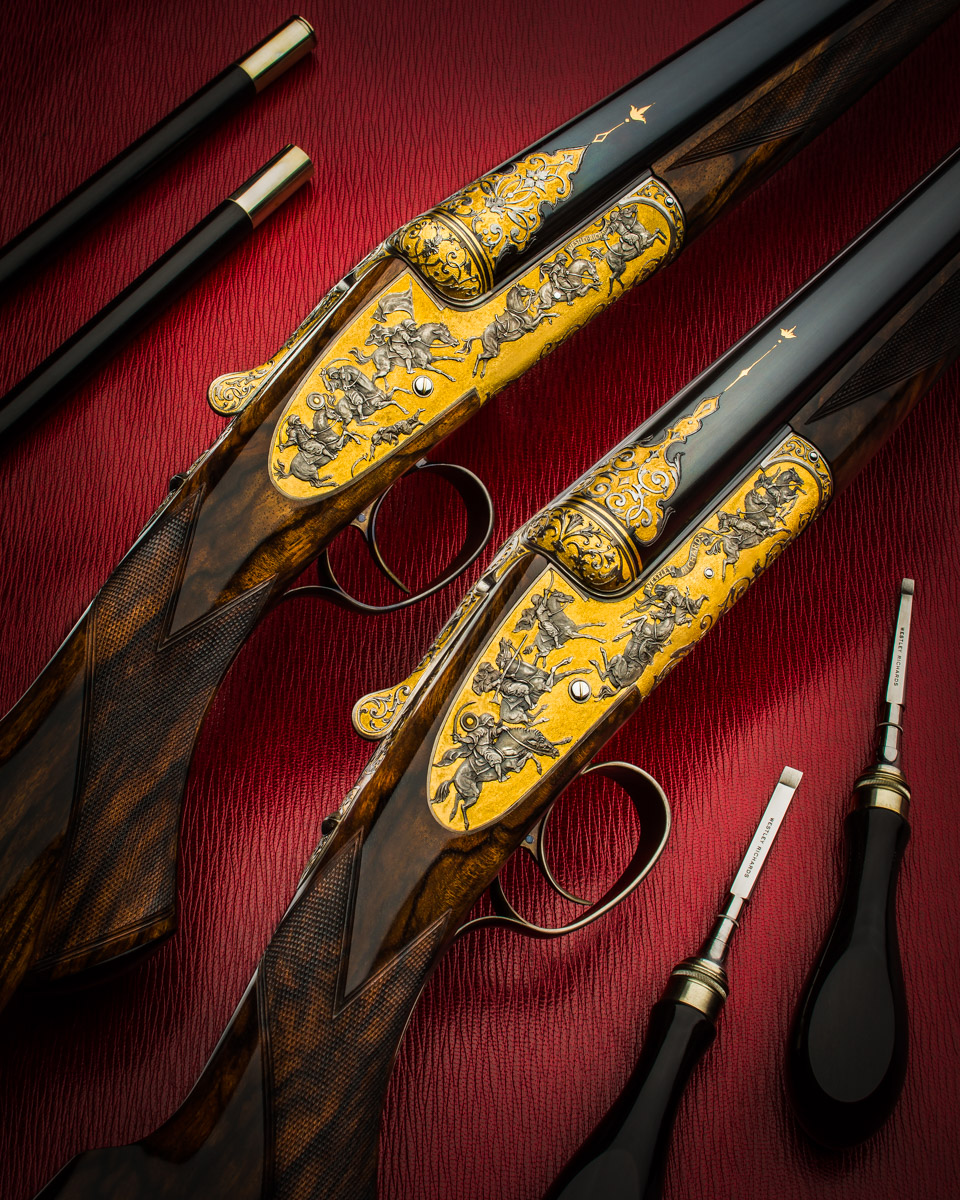 Lantuch is first and foremost an artist; he studied at Lithuania’s Vilnius Institute of Arts, and is accomplished in many mediums—drawing, painting, printmaking, and creating jewellery of elaborate and innovative design. The late Simon Clode, in his 2013 introduction to Lantuch on The Explora, wrote: “Gun engravers who can draw and design are scarce, engravers who can conceive, draw, design and execute to the standard of Paul are even scarcer.” Clode—not only a connoisseur of engraving but a champion of the art and a sponsor of talented young engravers—recognised something special after Anthony Alborough-Tregear brought Lantuch’s work to his attention upon seeing it at the American Custom Gunmakers Guild Exhibition, in 2011 in Reno.

The process of embellishing the Arab Warrior Guns began in 2016, beginning with discussions between Lantuch and Clode about depictions of mounted warriors struck in fighting poses. The concept called for the figures and ornaments to be carved and depicted in relief against a stippled golden background, as if they were set on shimmering sands in the sunlit deserts of Arabia. “The balance of figures to the gold surfaces had to be carefully calculated,” emphasised Lantuch. In his final design this balance, to my mind, is the key to the success of the composition. 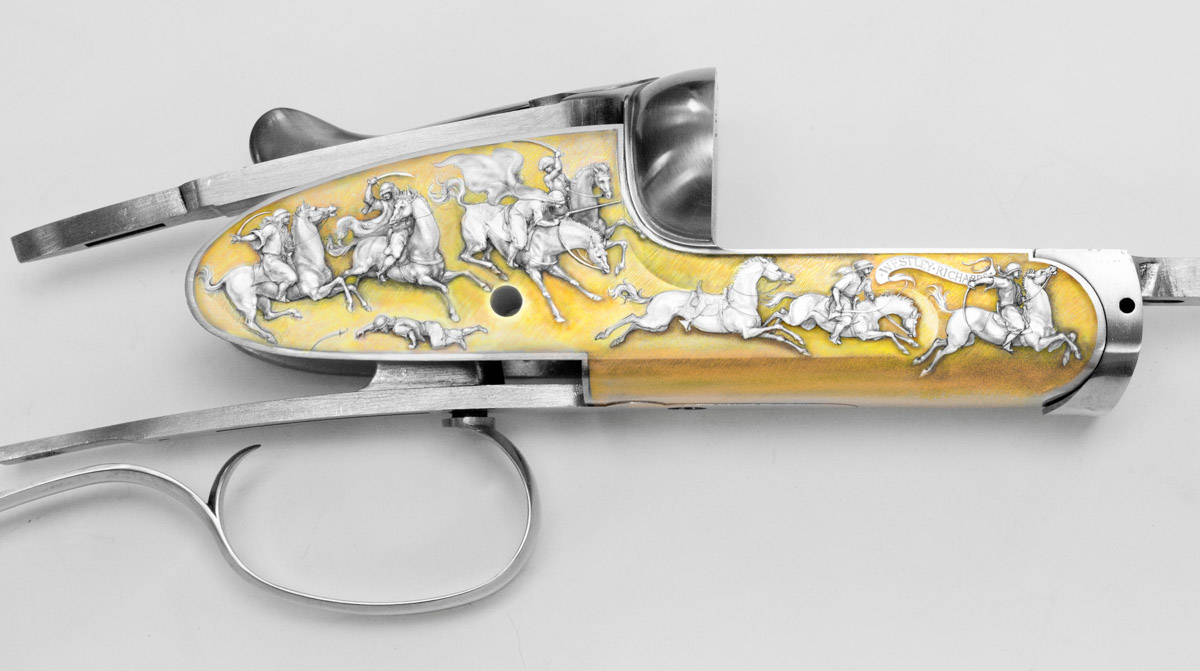 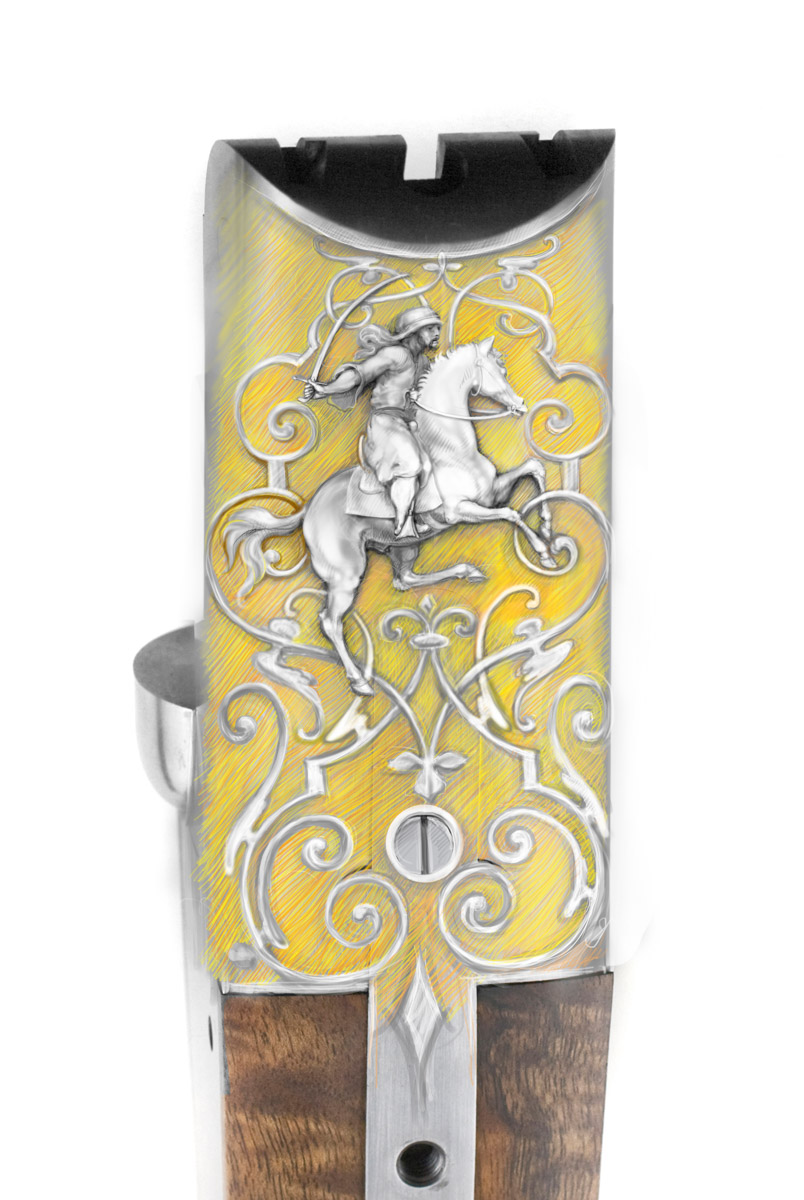 Lantuch and the team at Westley Richards exchanged notes and photos of evolving designs over two-and-half months until the right concept crystallised. The physical process of engraving started, Lantuch explained, with him transferring the drawings on to the steel surfaces with a needle, then cutting contour lines. Lantuch shaped and carved the warriors with a variety of chisels.

“The figures are actually based on 19th Century Orientalist European art, rather than real Islamic iconography,” Lantuch explained. “The ornamental work is florid in style, with geometric inclusions; this is called Arabesque, a kind of European interpretation of Islamic art.”

With flat chisels Lantuch removed steel for the background down to a depth of 1.5mm, and he then punched thousands of dots into the recesses before crisscrossing them with a sharp flat chisel. This creates a gripping surface for the gold inlay. Then, using pure 24-karat gold wire—and a lot of it, 1.8 ounces for the two guns—Lantuch hammered and inlayed the gold with a flat punch, then textured the background with special tools that he made himself. 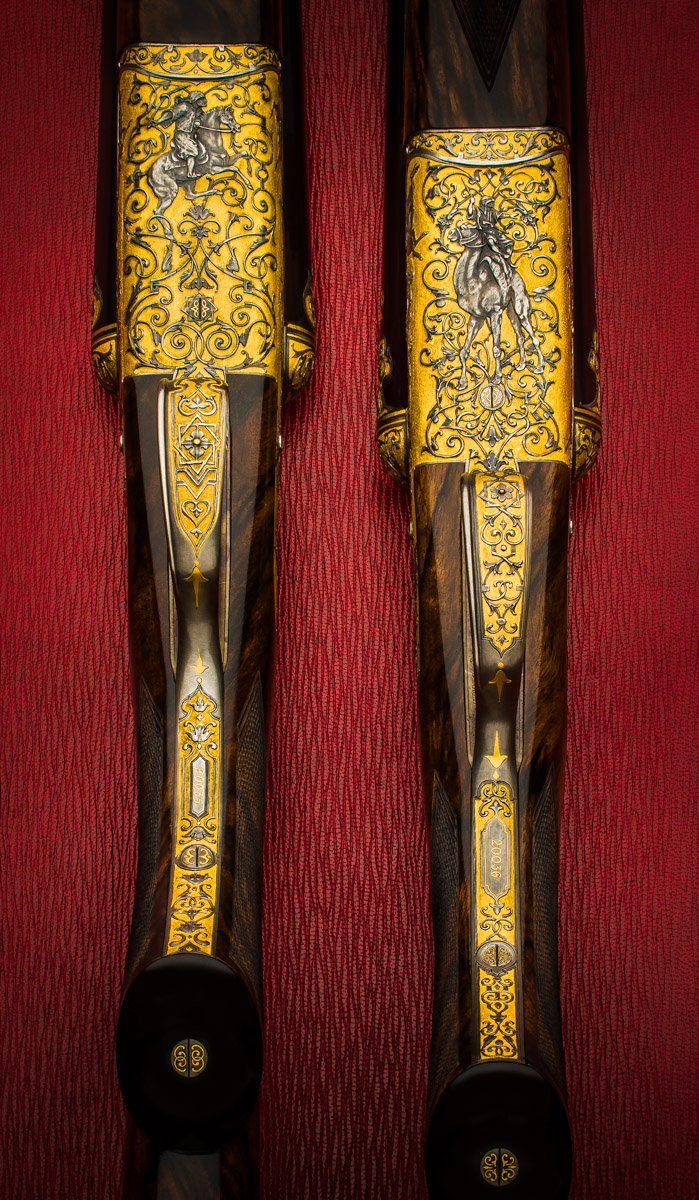 After the guns were returned to England and had been traditionally pack-hardened nearby in the premises of Birmingham’s famed Richard and Bob St. Ledger, Lantuch flew to England to begin the two-week-long finishing process.

The correct finishing of any carved gun is critical to the quality of its final appearance, and it is a delicate, painstaking multi-step process. First, the case colours must be removed, but not all of them, so to account for and to accentuate shadows and highlights, and the figures and ornamental motifs re-detailed and their lines sharpened where necessary. In some places the background needed re-matting and, beautifully, the gold seams between the action and lockplates were hammered and joined as if each action was one unit. “Paul essentially sealed the guns’ actions to mate up all the goldwork,” said Alborough-Tregear. “It gives the guns a svelte, almost organic quality.” 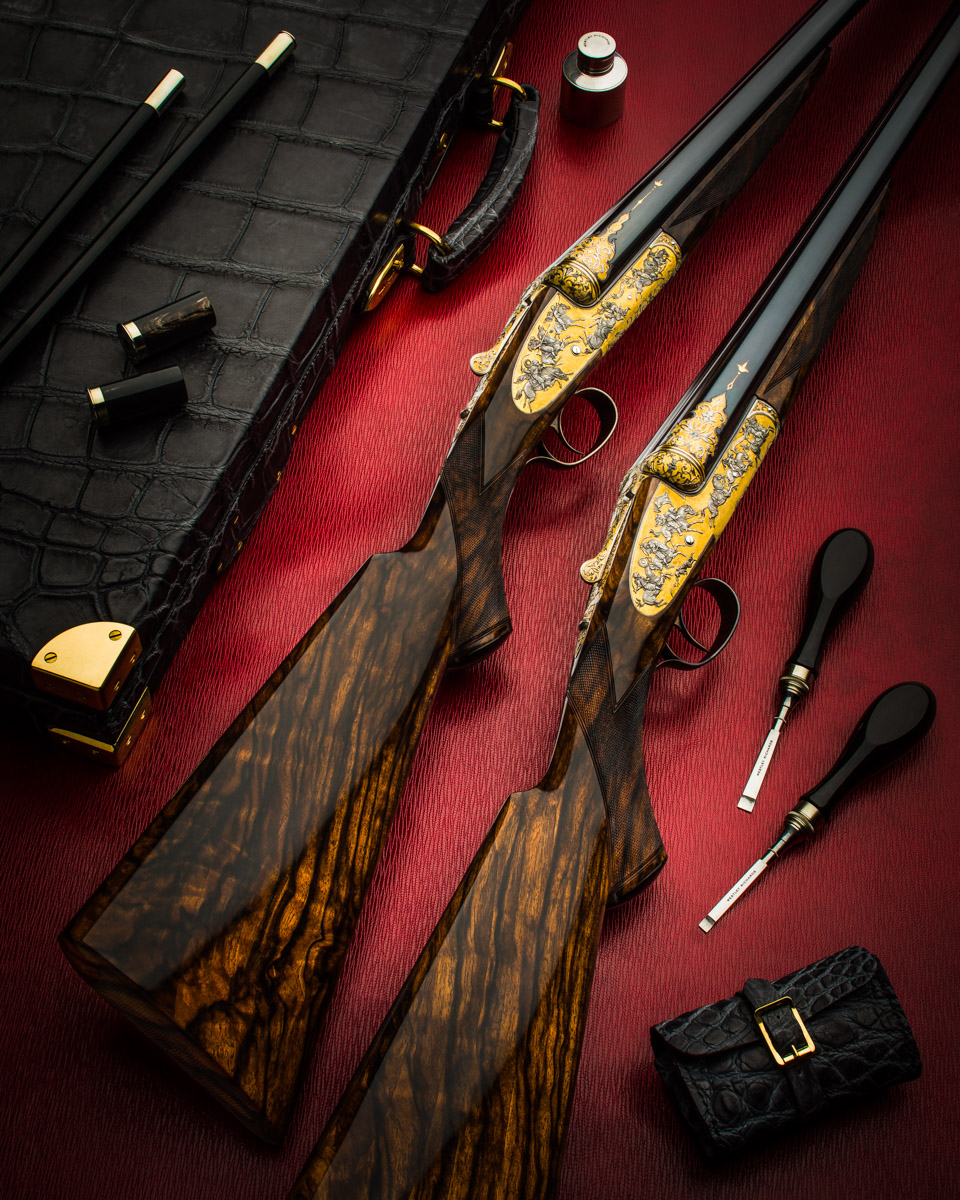 Despite the carvings and gold, the guns appear as fleet as the long-limbed Arabian stallions portrayed on them. They are even lightweight—6-pounds, 8-ounces each. “Regrettably, many London guns are now getting heavier and heavier, with loggish, long barrels made to fire heavy cartridges—really missing the point of a fine gun,” said Alborough-Tregear. “The Westley Richards round-body guns are so elegant you could easily mistake our 12s for 16s.”

The pair is housed in an oak-and-leather case appropriate to the guns: outwardly clad in best black alligator hide, French-fitted, goat-skin lined, all metalwork gold plated, tools made with horn handles, and geometric marquetry in the frame, the owner’s name hand-embossed in traditional gold leaf. It is a showcase in the most literal sense of the word and befitting of display in any museum of the arts.

Vic Venters is a journalist and author of The Best of British: A Celebration of British Gunmaking, as well as Gun Craft: Fine Guns and Gunmakers in the 21st Century. He has covered the British and European fine gun trade since the early 1990s and is the Senior Editor of America’s Shooting Sportsman magazine.