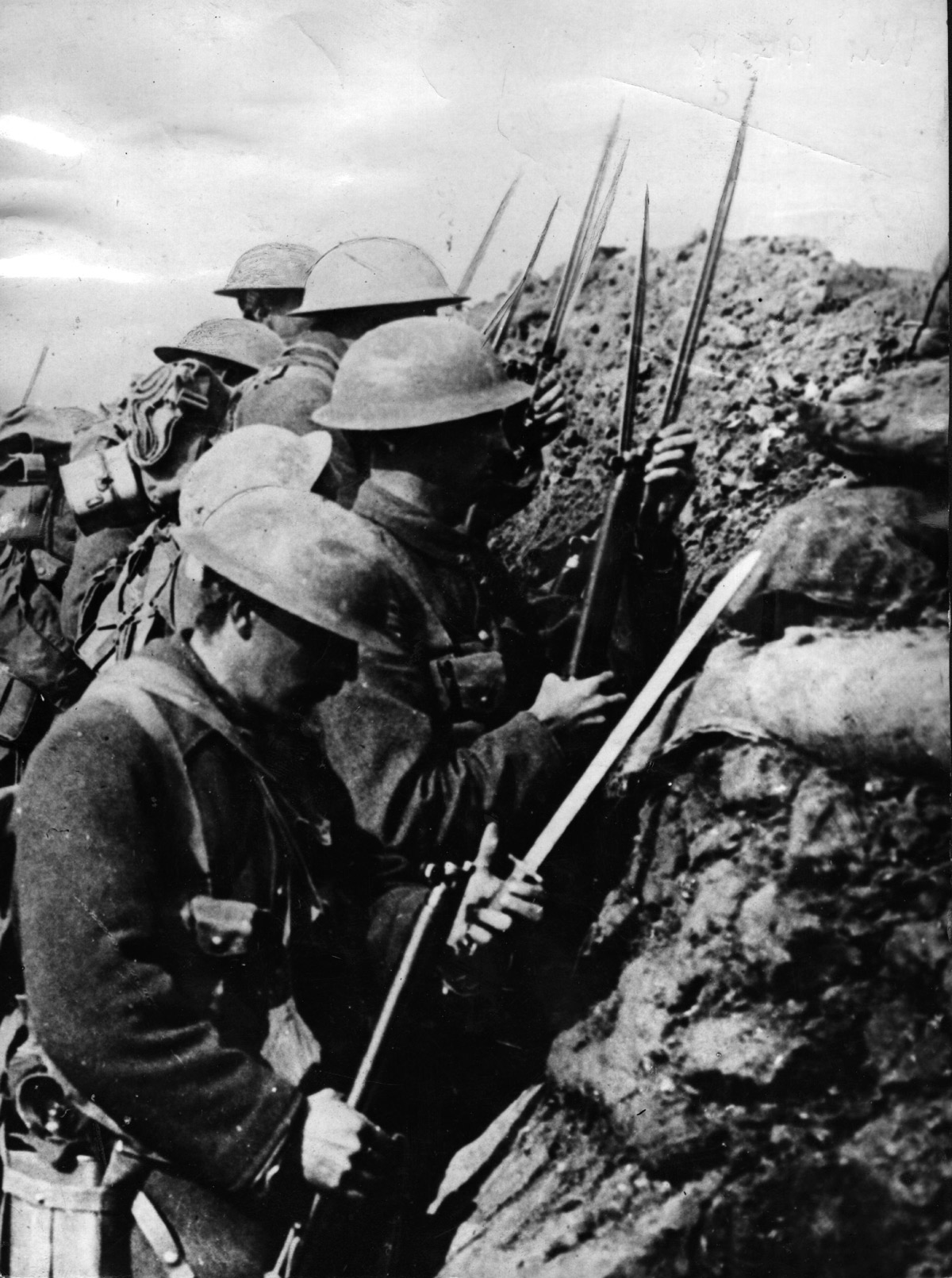 Westley Richards and The Great War.

For those of you who are unfamiliar with Birmingham, the city is currently undergoing quite the transformation. The skyline is changing at a rapid pace and from the factory floor window I can count half a dozen cranes building new offices, multi story car parks and old Victorian factories being converted in to luxury apartments. HSBC are in the process of moving their retail division from London to Birmingham and big firms like Deloitte and Deutsche Bank are already present. With high speed rail coming to town in the next 10 or so years it will change beyond all recognition.

It is therefore, in these modern times, easy to forget what this city of ours once was, what it produced and what it stood for. And I’m sure it’s not unfair to say that it’s my generation and younger that are guilty of not knowing the routes of the city and in particular its gun making history. There’s no doubt a large proportion of society that would like disassociate guns with Birmingham and not so long ago a petition very nearly saw the name of our historic Gun Quarter changed and resigned to the history books. Luckily it was successfully fended off and common sense prevailed, a rarity in these times.

For me the gun making history of Birmingham is hugely important and something that should be remembered, not just in sporting gunnery but military as well and never more so than when our great nation faced the unimaginable prospect of World War One. 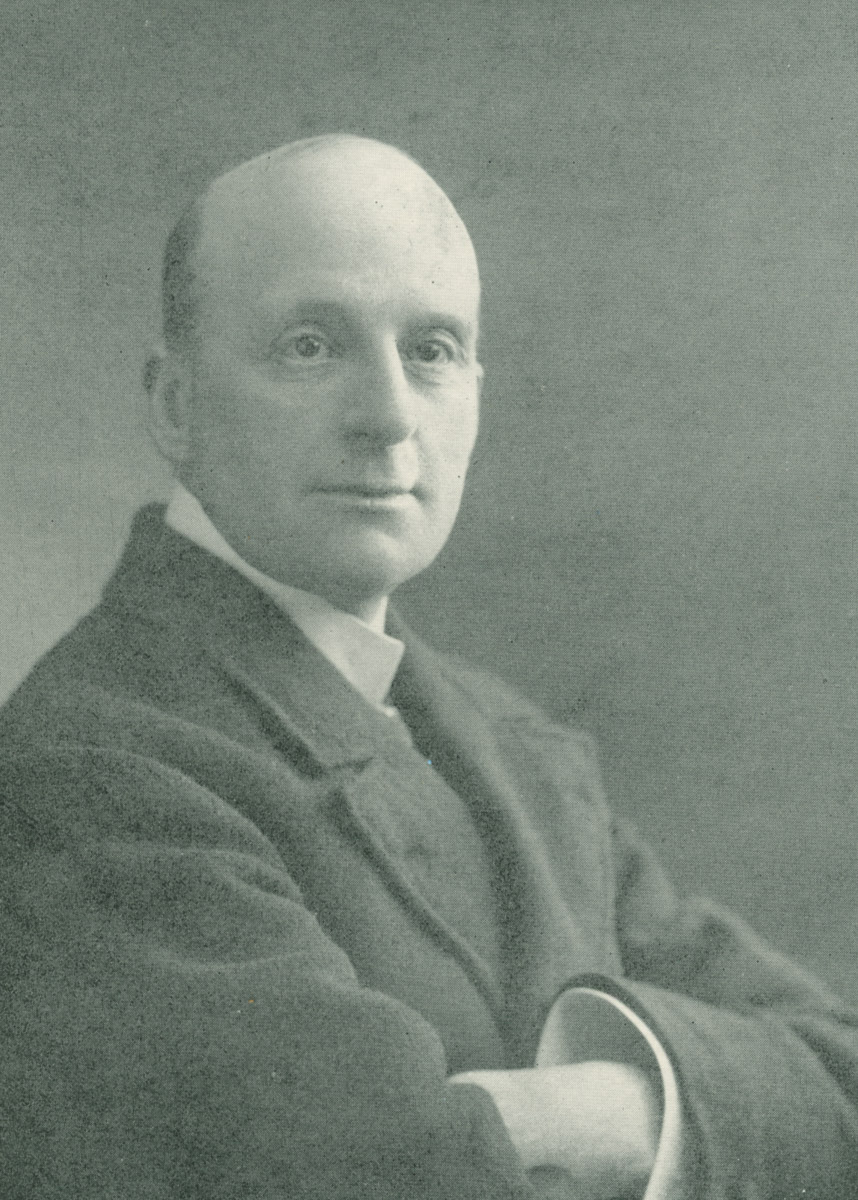 In the years running up to war we were busy inventing and perfecting our sporting guns, under the expert guidance of Leslie Taylor who became managing director in 1899 and saw Westley Richards through the First World War. It was a busy time supplying the domestic market as well as the far reaching empire with guns and rifles and the Anson & Deeley action, the Droplock, the Explora and Fauneta guns were all in production by this point and the company was certainly in a state of advancement and success. Not long after we celebrated our centenary in 1912, Europe was at war and not only did the company see huge changes but the city and country as a whole.

Orders for sporting guns were generally suspended although some orders were taken through our London agency, which at the time was run by Arthur Gale, and the sole focus concentrated on the war effort. This was a time for carrying out government orders and taking up military contracts which while they would have put a huge level of intensification and stress on the company and to quote Mr. Taylor the work was ‘exacting and tedious’, there certainly would have been money to be made from the contracts and under Mr. Taylor’s famously logistical brain and management skills the company geared up for war. 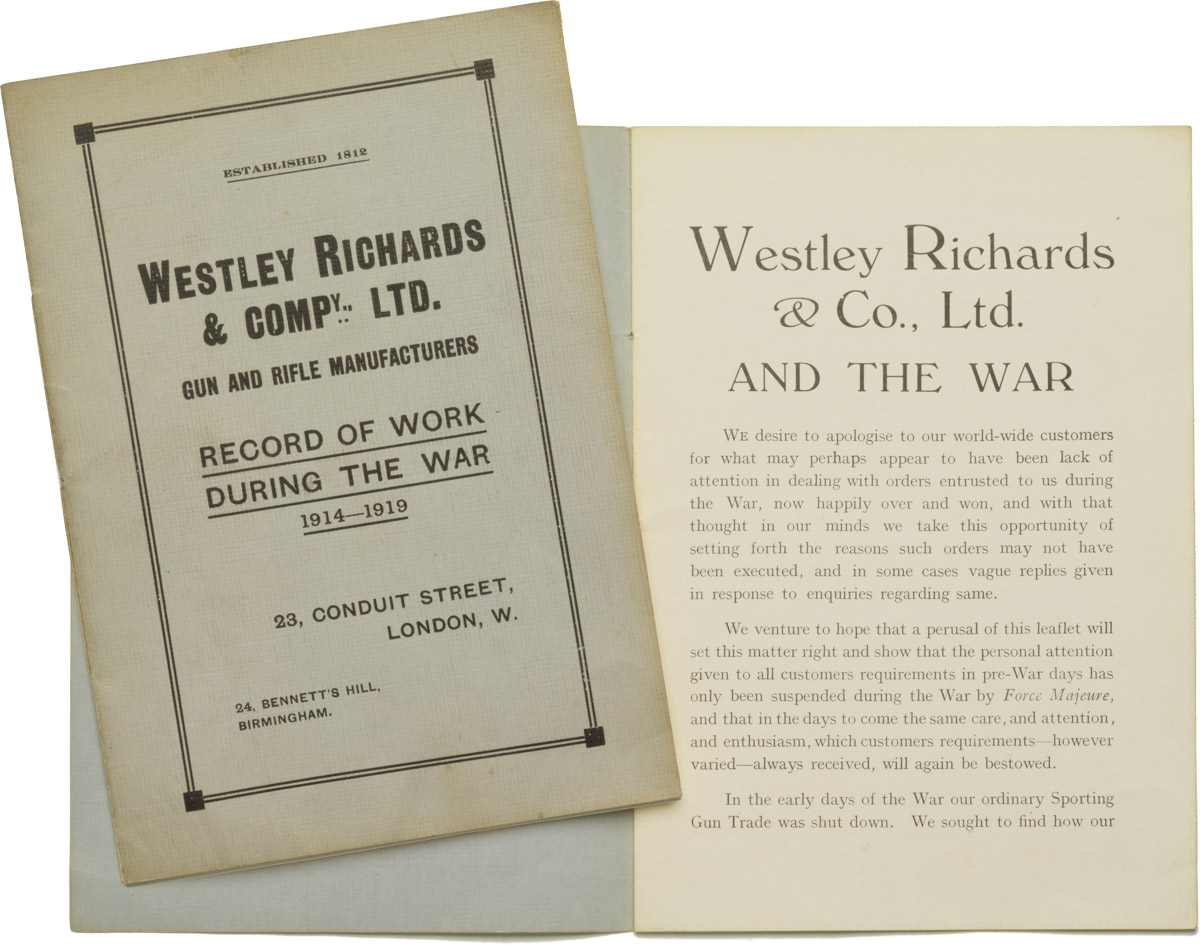 A small pamphlet issued after The Great War to explain the work that had been carried out by the company during that time and to apologise for not completing orders that had been placed.

In 1914 we received an urgent order from the government to convert 10,000 service rifles to a ‘modern type’ for use of our army. The government ordered the employment of all of our highly skilled labour and early and late working for the rifles were badly needed. We were also involved in what was known as the Peddled Rifle Scheme which was basically a collaboration of various manufacturers to make a complete rifle, each factory would produce what it was they were most proficient at. We made complete rifle barrels with the blade front sight and complete rear sights which was closely monitored by the government inspection team that was set up in the factory over see our work.

Leslie Taylor also set up a Rifle Repair Department for reconditioning used guns which had been broken, damaged or had parts missing whilst used on the battlefield. Over the course of the war Westley Richards was responsible for repairing or converting over 200,000 rifles. We, of course, were one of many factories and gun works that produced or repaired weaponry or munitions for the war but perhaps the most famous of all was the Birmingham Small Arms company situated in Small Heath. They produced, amongst many other arms, the short magazine Lee Enfield .303 infantry service rifle and the Lewis machine gun, also in .303 and were producing around 10,000 rifles a week. There would have been several subsidiaries of the BSA and many back street workshops producing component parts to supply the bigger industrial factories. Many Ministry of Munitions employees were on ‘piece work’ and would have been paid for every part, round or task completed. People with, what was known as ‘reserved occupations’ such as engineers, were spared being sent to the front line as their skill set was deemed more valuable to kept back in England. So many people like tool makers were drafted to work in the gun making factories as their skills were transferable. However even with the drafting of men from other sectors, Westley Richards had to employ many unskilled men and boys to carry out delicate and detailed gun making such was the shortage of workers. At the peak of the war our work force had quadrupled in size and the factory ran day and night with our week starting at 7 o’clock on Sunday evening and the machines running without stopping until 5 o’clock the following Saturday afternoon. 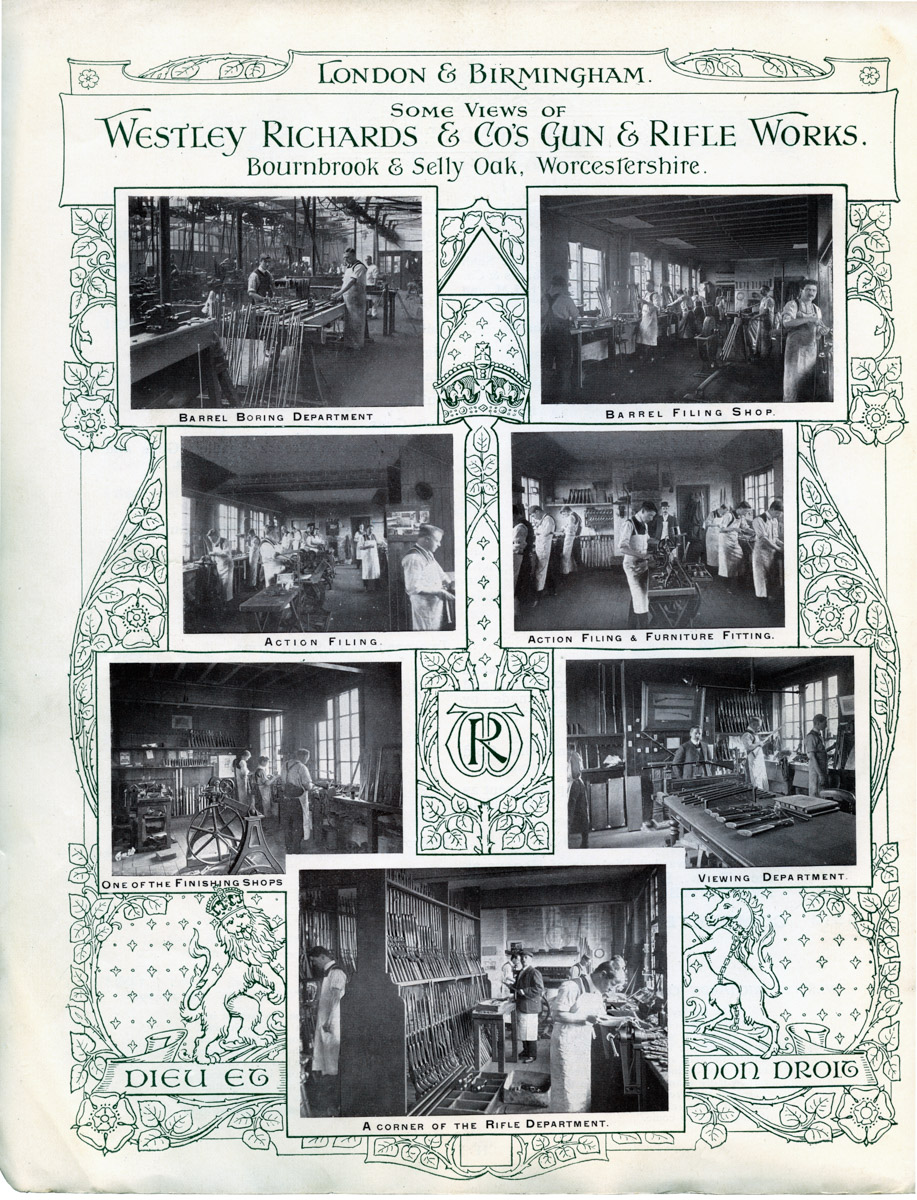 A page from the centenary catalogue of 1912 showing the various departments at the Grange Road factory.

While many men would have joined up to fight right away, Leslie Taylor lobbied very hard to keep key workers from being called up while the factory was on munitions work. Some of our unskilled workers from our London agency were called to fight however Mr. Gale in fact wrote to the War Office to keep one particular man from being drafted. 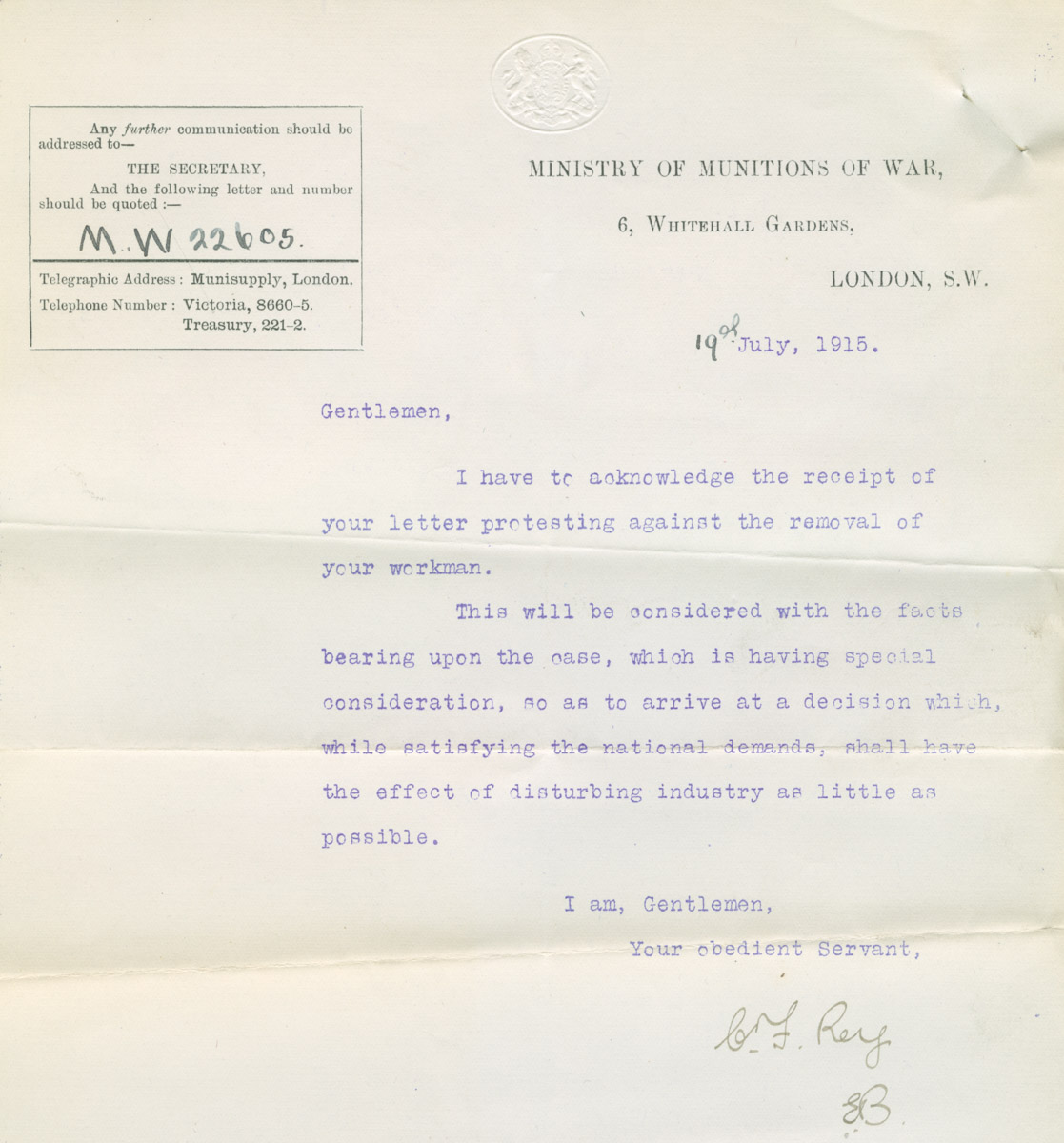 A letter from the Ministry of Munitions of War in reply to Leslie Taylor and Arthur Gale's request to keep workers from being called to fight.

While the government contracts took up most of the production, the London shop did take some sporting gun orders, with delivery postponed until after the war. Several men from the London shop were sent up to Birmingham to help out in the factory. We also took several private orders for rifles suitable for training and arming territorial personnel. In 1915, Sir Henry Bunbury of Manor House, Mildenhall ordered twelve .303 Martini rifles with bayonets, for a ‘Training Corps’. Ipswich Volunteers ordered eighty Westley Richards .303 Martini rifles. The Lincolnshire Territorial Army also placed an order for four Mark 1 Star Lee-Metford magazine .303 bore rifles with telescopic scopes and the Regent Street Polytechnic placed an order for one hundred .303 Westley Richards Martini Long Infantry Rifles for the Polytechnic’s Volunteer Training Corps. 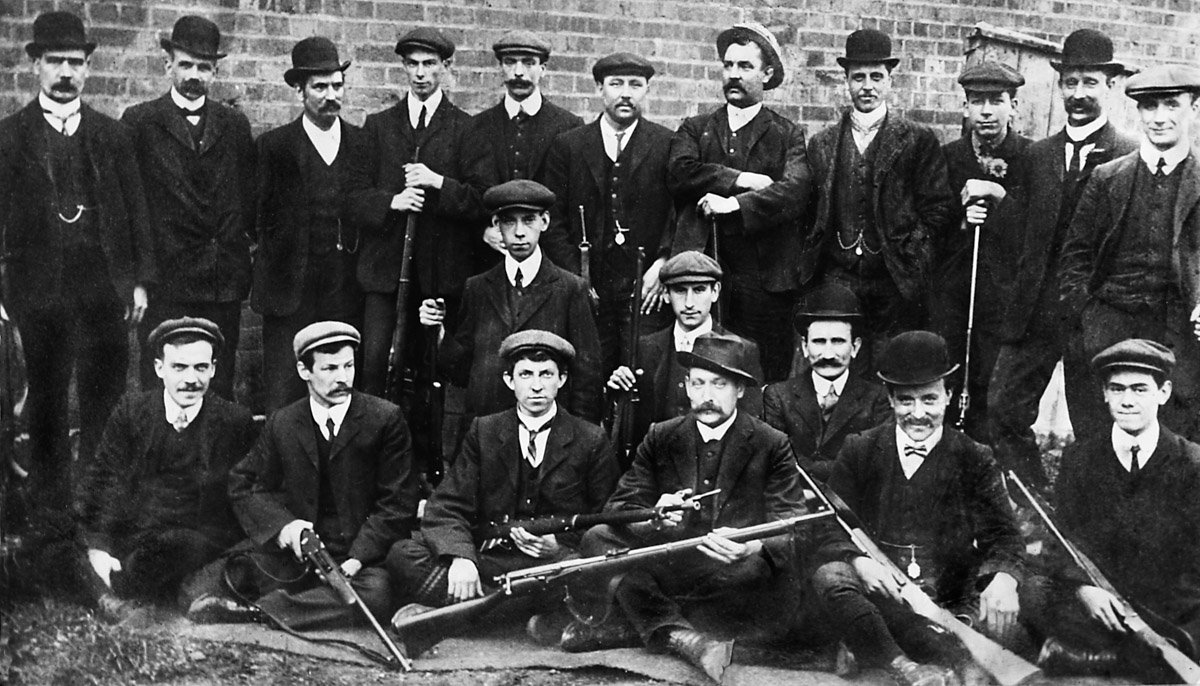 The assembled gunmakers of Westley Richards photographed just prior to The First World War.

The war contracts actually continued up to 1920 but by then the sporting gun production had been restarted. Sadly as the government contracts finished there was an inevitable slump for most British industry. In 1920 the management of Westley Richards, which at the time was Leslie Taylor the managing director, the chairman - George Dawson Deeley the son of John Deeley the Elder and Charles Gardener was the export manager, had to reduce the workforce from 300 to 100 as well as a reduction in wages for the 100 who remained. Not much of a reward after the strains of the war!

The first world war had changed Westley Richards and Birmingham forever and gun making played a pivotal role in the industrialisation of Birmingham. The numerous factories all over the city making guns and munitions were so successful that sewing machine, bicycle and later car manufacturing all took inspiration in terms of manufacturing techniques and mass production from how Birmingham made guns.

Birmingham was always known as the city of a thousand trades and gun making has always been a proud part of its history. As the city changes its appearance and a new age of people take up residence I feel it important and necessary to acknowledge our gun making predecessors and the city and what they both achieved in our country’s time of need over 100 years ago.