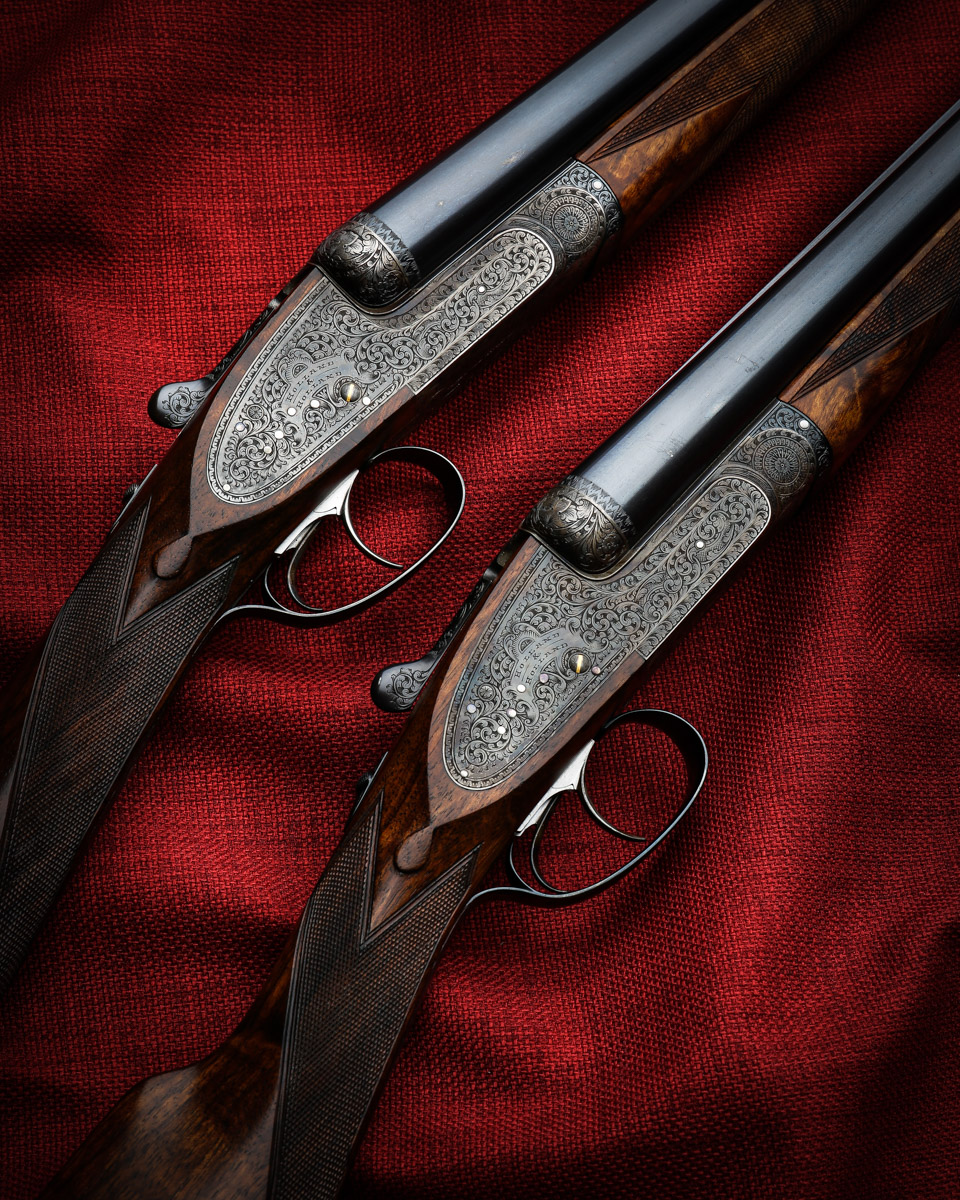 With Red Grouse shooting now officially underway, the game season in the Uk can now be looked forward to with real vigor and excitement!  The anticipation of a busy season will see shots progress from grouse, to partridge, to pheasant as the season works on through the autumn and winter.

Double gunning, perhaps the pinnacle of driven game shooting will feature throughout the season on many of the larger estates and so it is no surprise to see a spike in the demand for pairs of guns. With this in mind it could not have been a better time to have gotten the most recent addition to the second-hand gun inventory here at the Westley Richards U.S. Agency. 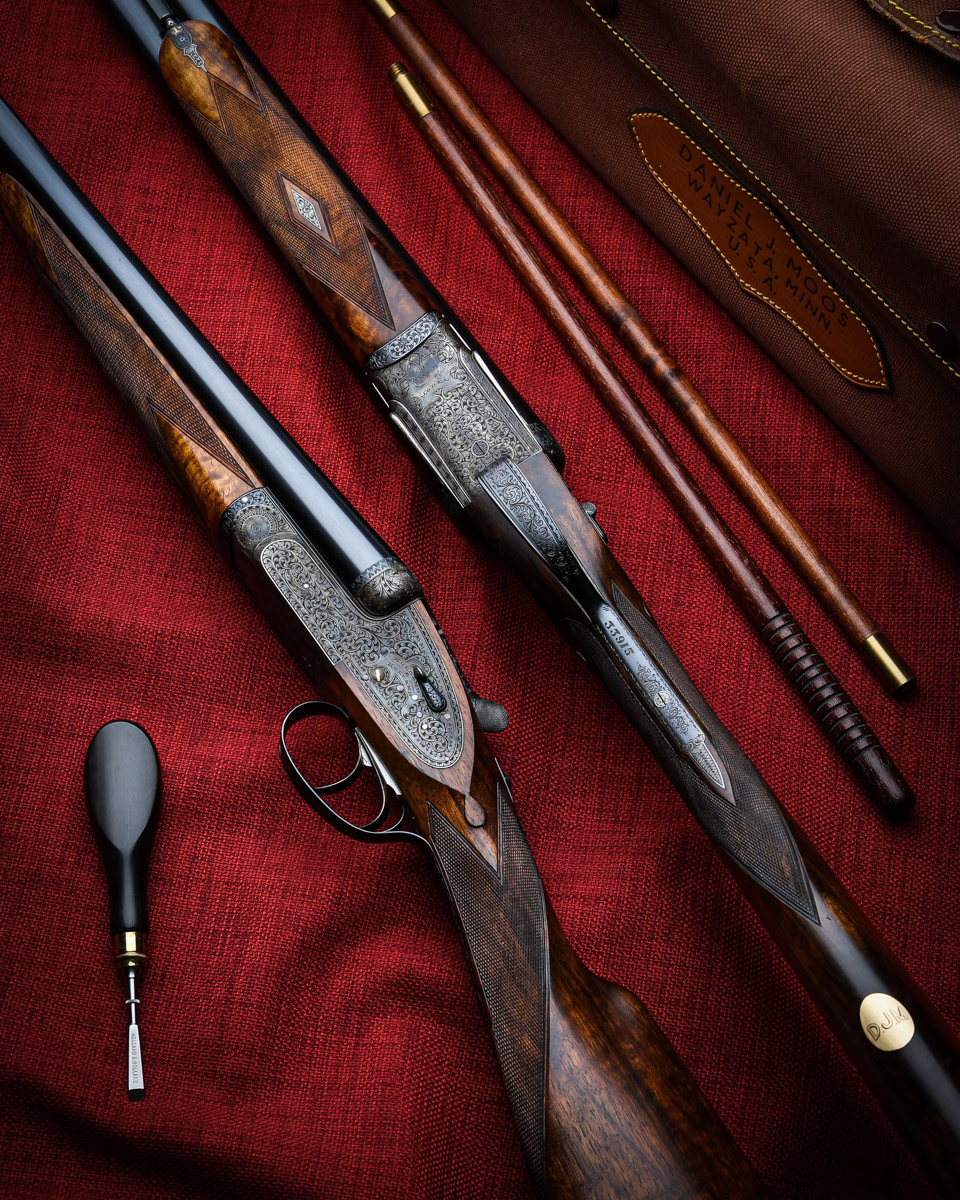 Finished in 1953 this pair of guns represents, in my mind, one of Holland’s finest periods. I know the guns made prior to the World Wars and between the Wars, are often thought of as the bench mark for overall quality in a gun, but lay this pair of post war guns by a comparable Holland, of any era, and I think you will be surprised. The bold Royal engraving is wonderfully cut and well executed, the fit and finish of the guns is superb and remains in high original condition. The barrels were expertly struck and bored. The guns showcase all the hallmark features that made Holland & Holland such a notable name in gunmaking.

The guns are built on the H&H patented Royal model bar-action sidelock ejector with hand detachable locks and treble grip action bodies. The guns have two triggers, the front ones hinged, and rolled trigger bows. The guns also have automatic safeties with “SAFE” inlaid in gold as well as gold lined cocking indicators. The square bar actions have beautifully shaped beads and fences and the actions are engraved in the classic house or Royal engraving pattern of bold foliate scroll surrounding the Maker’s name. The bottom of the action is engraved “Royal Model” and each gun is appropriately numbered in gold “1” or “2” on the top lever, top rib and forend iron. 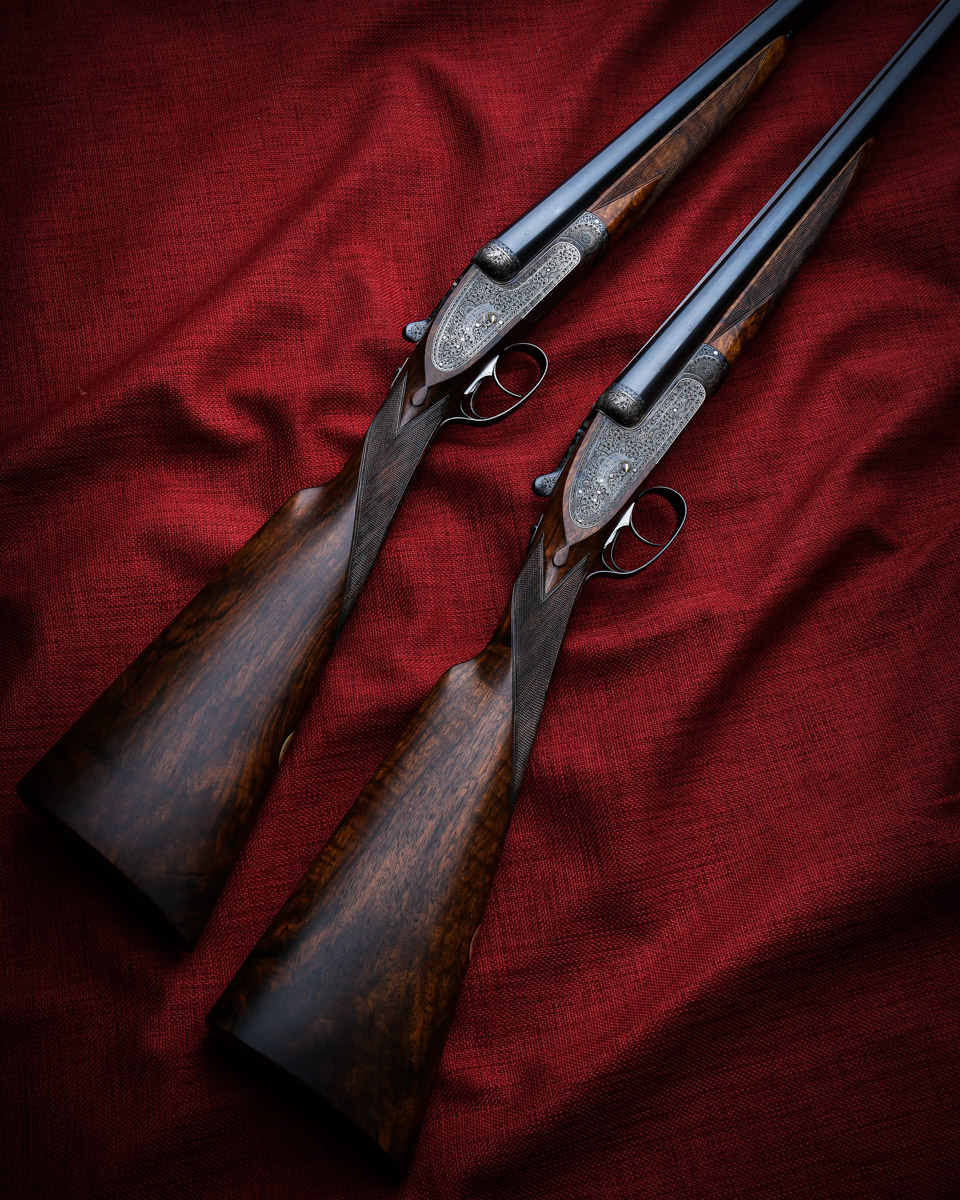 Superb original condition is a highlight of these guns.

The guns have their original 28” chopper lump barrels with Holland’s hidden third fasteners and raised matted game ribs. The barrels have original 2 ¾" chambers (1 1/4 oz proof) and carry Holland’s patent self-opening assembly. The barrels are engraved with the maker’s name and the “98 New Bond St.” address (ca. 1858-1960). The bottom rib is engraved “Made in England” and “Royal”.

The straight grip walnut stocks have Holland’s classic diamond shaped hand. The stocks have a dark contrasting figure and match nicely, both having 14 3/4" length of pulls over checkered butts. The splinter forends have Anson push rods and Holland’s patent ejectors. Stocks and forends are checkered in a very well-cut point pattern checkering with borders and traditional drop points. Each gold stock oval has the previous owner’s initials D.J.M. 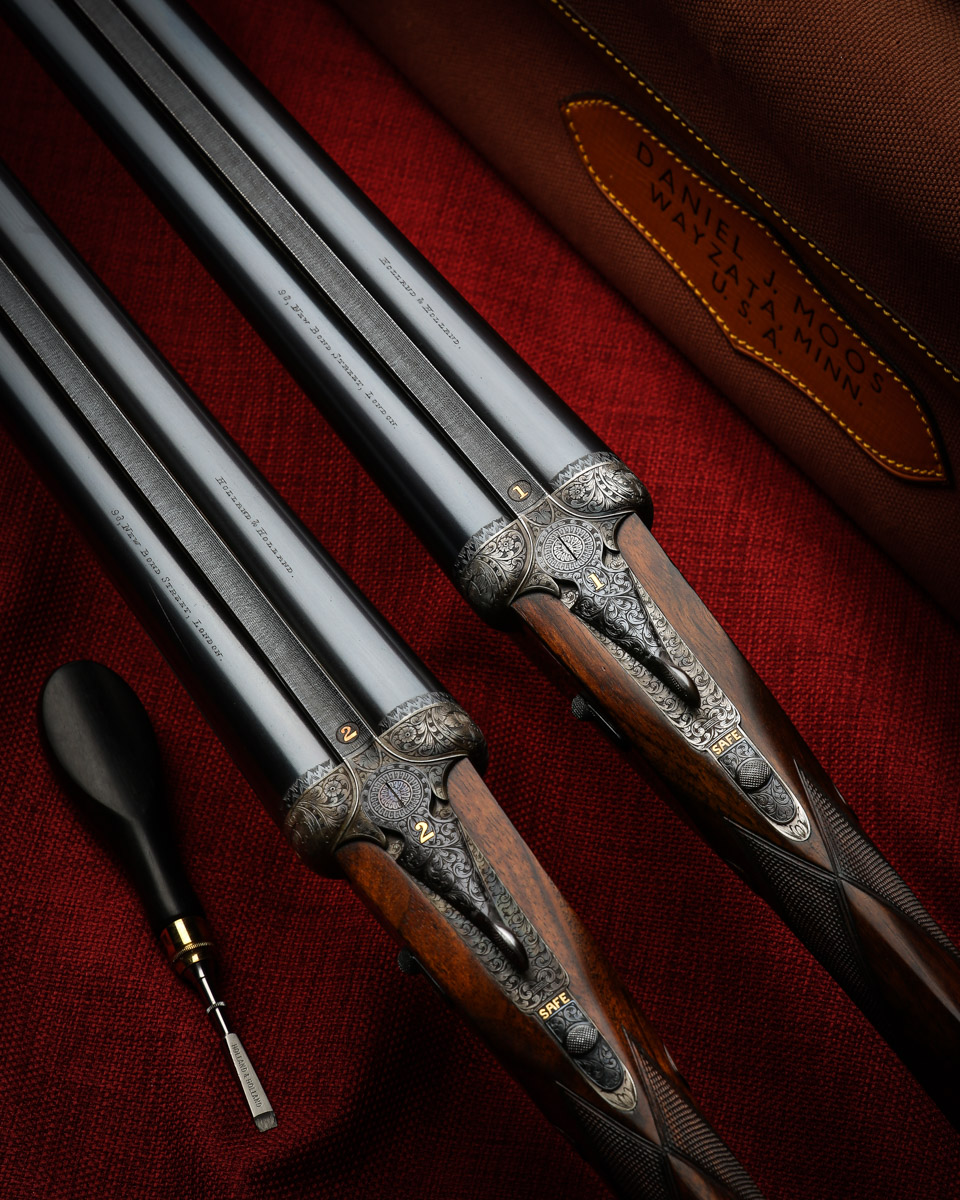 The guns come complete in the maker’s two-gun motor case with its canvas cover and the original owner’s name and hometown on the initial patch.

These guns remain in near new condition as they were used very little and were well cared for. It is hard to imagine a pair of vintage guns in a more relevant configuration for today’s shooting. The bonus is they are from wonderful period in this venerable maker’s history. This is a very special pair of guns. 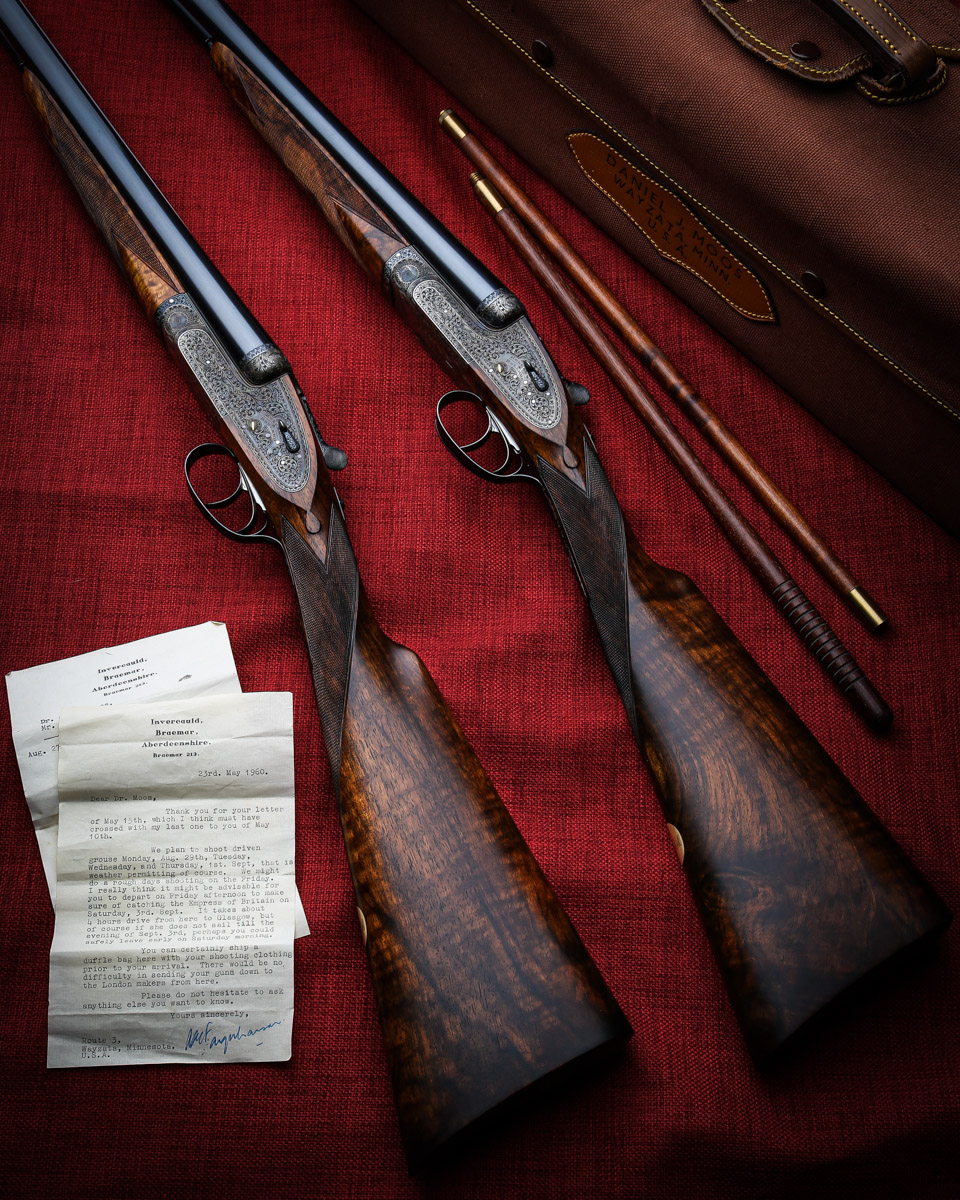 A typed letter to the original owner of this pair of guns was found inside the gun’s case. The letter quotes a few days shooting on the grouse moors of Scotland and is dated 1960.