In all my years selling guns, I don’t think I ever met anyone who didn’t have a .22 LR of some kind. Probably one of the greatest cartridges ever invented, it can be used as a precision target round or a highly effective hunting tool. It is very inexpensive to produce and good reliable firearms, in both handguns and rifles, can be made and sold at very reasonable prices. Not surprisingly, the cartridge is one of the most widely used in the World and I would imagine most readers of this blog have at least one rifle chambered for the .22 Long Rifle.

The American firm J. Stevens Arms & Tool Co. first introduced the .22 Long Rifle (.22 LR) in 1847. It has a rimfire case (based on Louis-Nicolas Flobert’s .22 BB Cap cartridge) and shoots a 0.22” calibre 40 grain bullet at around 1,200 fps producing virtually no recoil. Being cheap, plentiful and easy to shoot, the cartridge also makes a wonderful round for teaching and practicing the fundamentals of shooting. 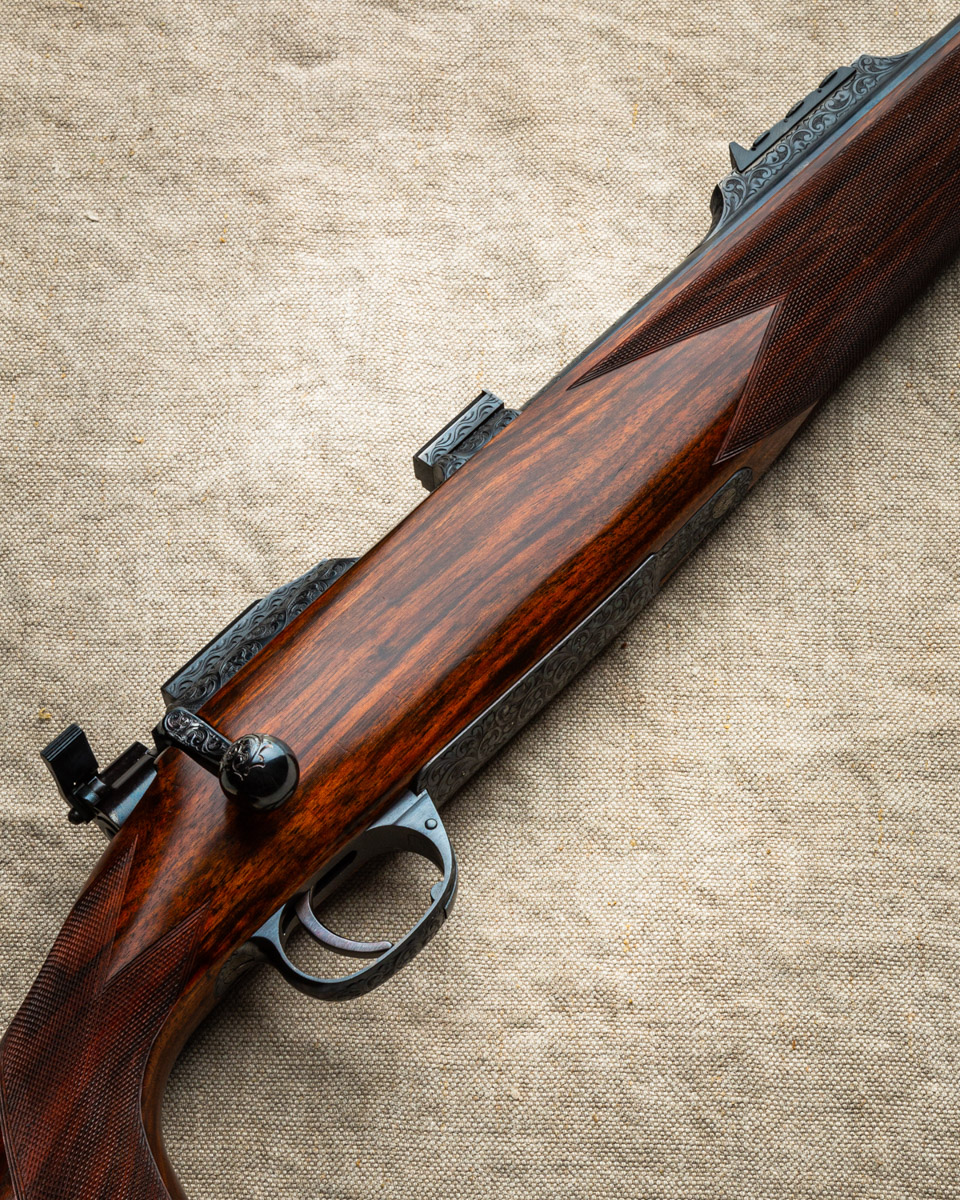 Due to the popularity of the cartridge, the rifles and handguns chambered for the .22 LR must be in the tens of millions. British companies such as BSA certainly contributed their fair share and even the best gun and rifle makers of England offered rifles chambered in .22 LR. I have seen .22 rifles from makers James Woodward, James Purdey, Holland & Holland, William Evans, and of course, Westley Richards. Most were single shot rook and rabbit rifles, but I have also encountered more than one Best Quality double rifle chambered for the cartridge. However, as popular as the .22 LR is, it is more often associated with a child’s gun or small game hunting. Finding any kind of .22 rifle made to the standard of a best quality big bore rifle, is something that will rarely happen.

You can imagine my surprise when I first heard of the rifle that just came through the U.S. Agency. Made in 1983 to match a customer’s big bore Westley Richards, the rifle pictured here is the only best quailty .22 LR bolt action rifle Westley Richards has ever made. 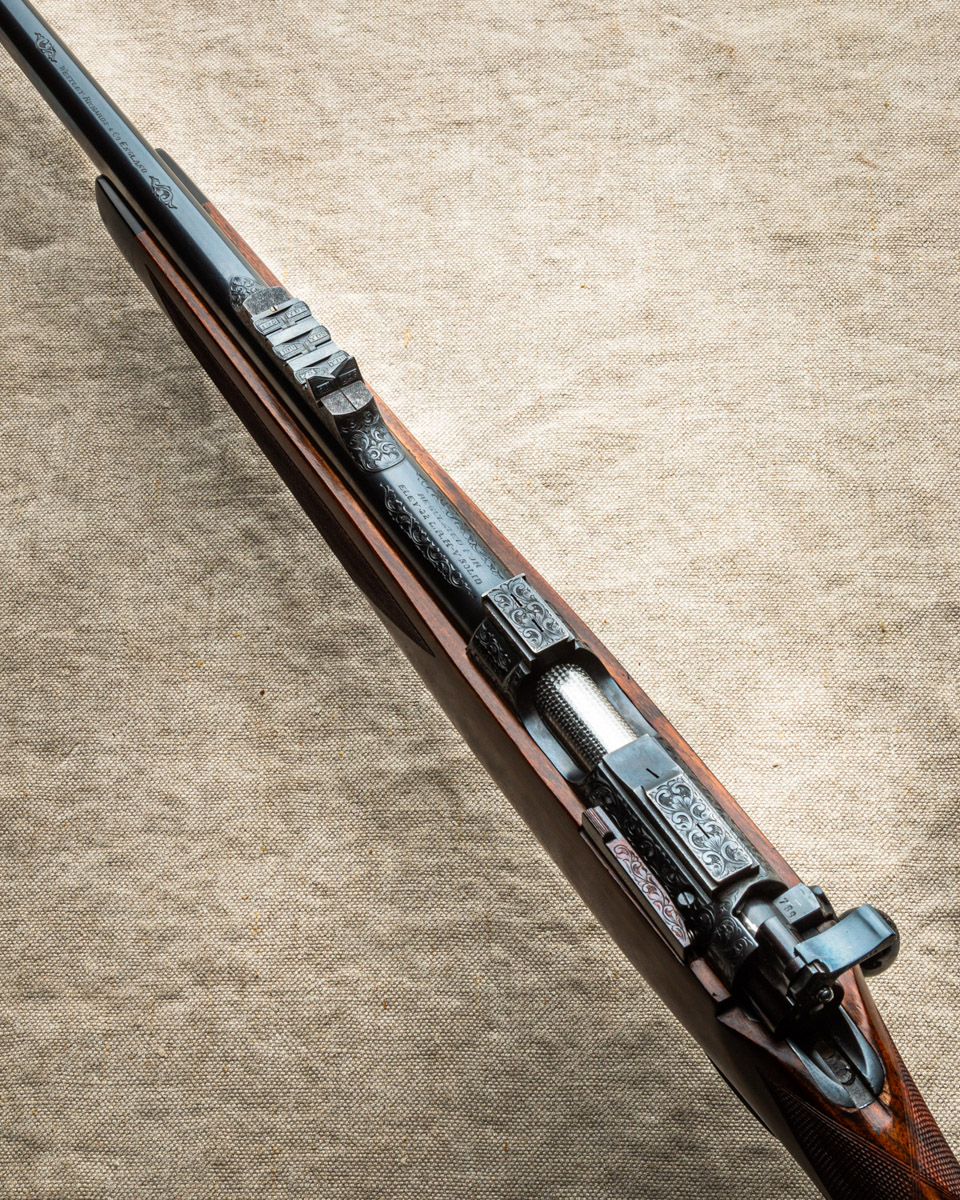 The history is fuzzy on how this rifle actually came to be but, the story goes, it started out to provide the client with a rifle to practice his shooting, in a chambering more economical and fun to shoot than his big bore rifle, yet having a similar style of sights, size and weight. The current owner had told me about this rifle but seeing it in person, it was clear this project took on a life of its own becoming much more than just a rifle to practice with.

The rifle is best quality in every way. Based on an action of Mauser design, the MAS .22 LR Training Rifle. After WWII, the Mauser factory fell into French controlled territory and during this time, the French had the factory design a .22 calibre training rifle for their military. The Mauser people drew on a previous Mauser 22 design, the KKW, and made some slight modifications. The first ones were produced in the Mauser factory but, production was moved to Manufacture d'armes de Saint-Étienne (MAS) or the Saint-Étienne Arms Manufacturer. MAS was a French state-owned manufacturing company located in the town of Saint-Étienne, where weapons have been manufactured since the Middle Ages. The rifles were assembled until the existing supply of parts were used up. 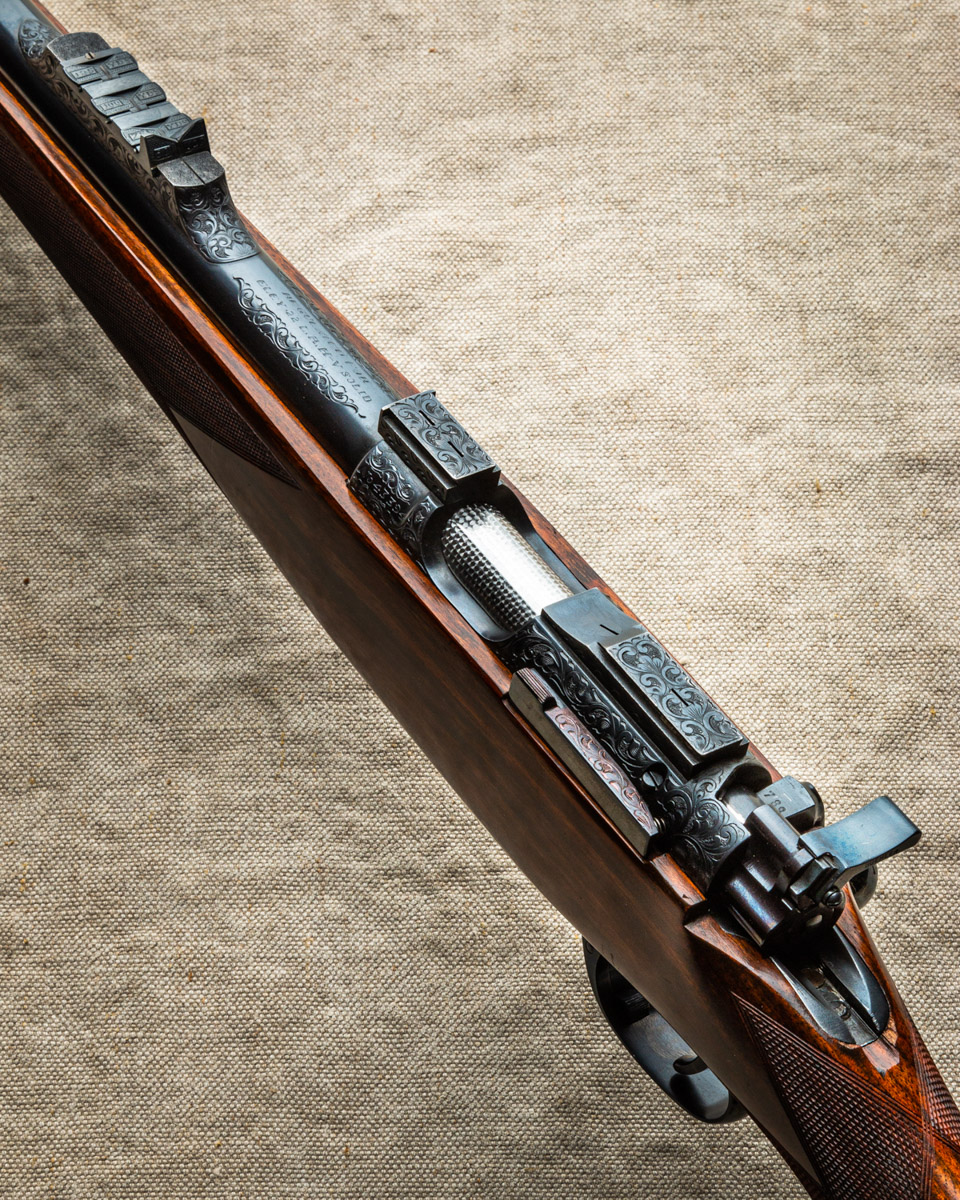 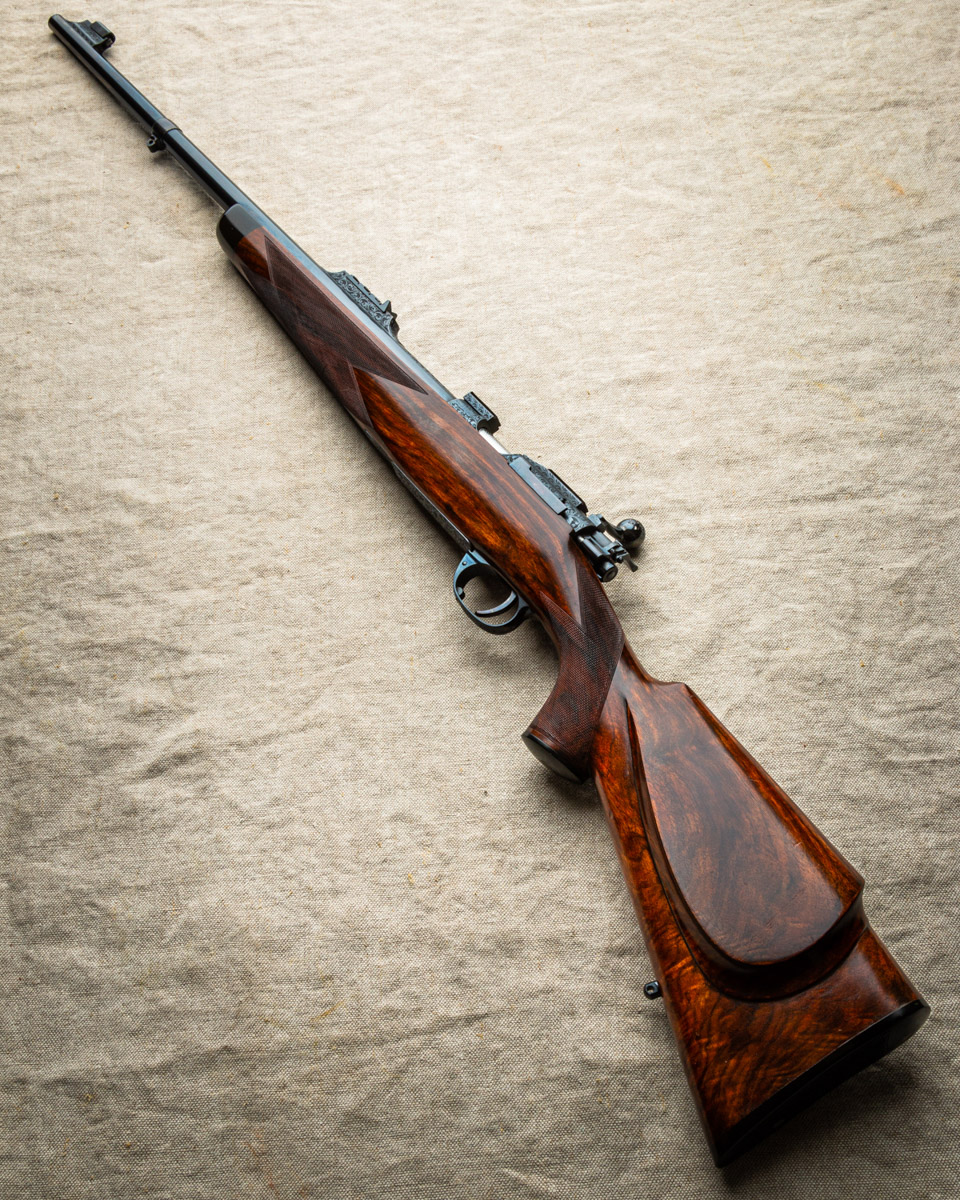 The rifle has a 24” barrel with the same contour as a standard centerfire rifle and the muzzle’s crown is recessed ¼” with a diameter of about .330”, hiding the small .22 calibre bore and further adding to the rifle’s disguise. The barrel was also fitted with Westley Richards pattern island rear sight with one standing Express sight and three folding leaves (50, 75, 100, 150 yds) and Westley Richards patent combination foresight. The rifle was also made to accept a scope and has handmade grooved mounts that replace the original receiver sight the MAS 45 rifles were fitted with. The bases are engraved to match the rest of the rifle and accept American scope rings intended for .22 rifles with ¾” grooved receivers.

As with any best quality gun or rifle, the devil is always in the details. This rifle is certainly not short on any details. I also imagine the rifle comes with plenty of heartache, frustration and disdain from the men who had to make it. While it is hard enough to build a gun or rifle to best quality standards on a model of gun the makers are familiar with, applying that same standard to something the makers have never built brings a new host of challenges to its manufacture. Being that the factory had never made a .22 bolt action before, there were no plans, notes or examples to reverse engineer, so the project started with a blank sheet of paper. Add all of this with an overarching theme to deceive the viewer into thinking it is a larger calibre rifle than it is, I can only imagine the turmoil this little rifle’s creation caused. 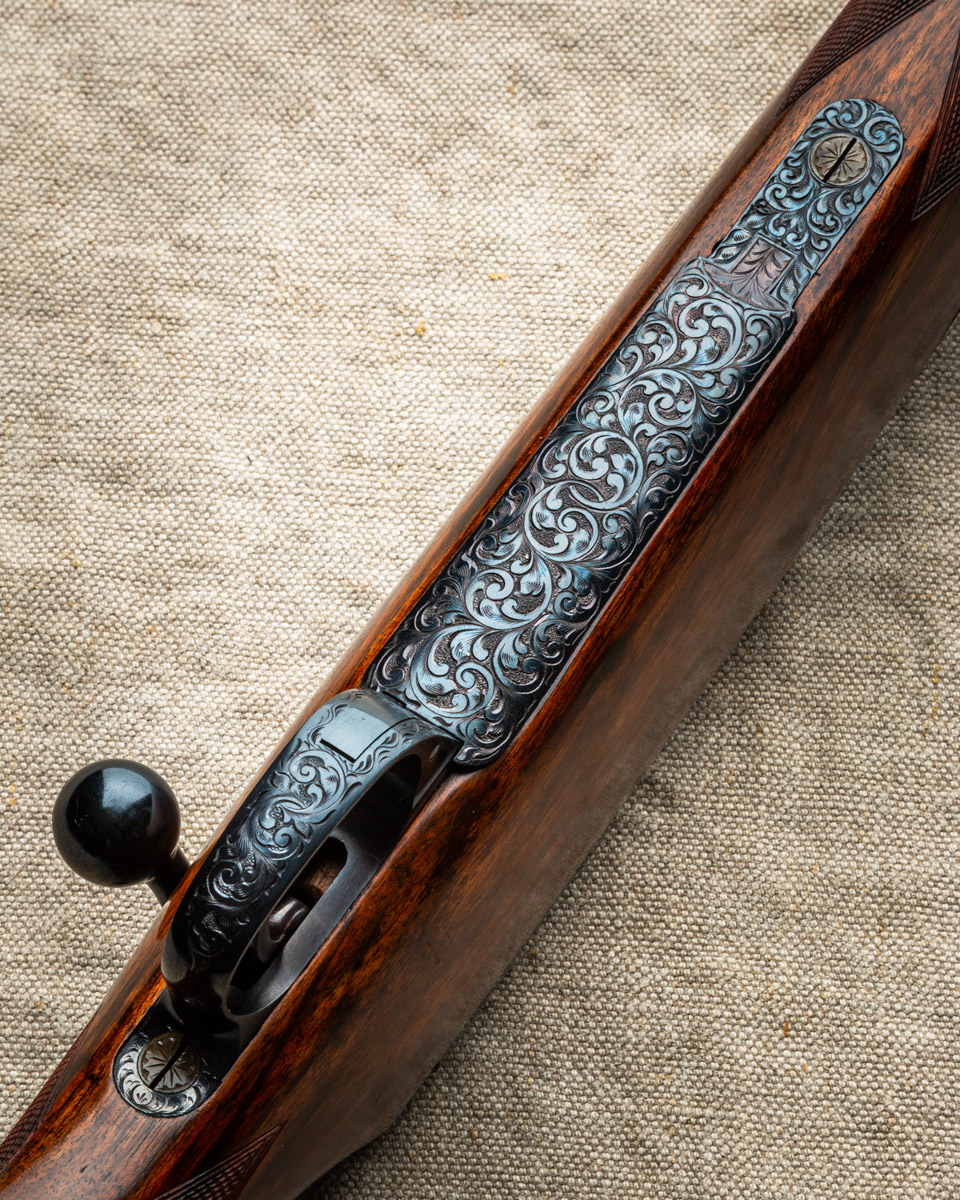 Its rarity notwithstanding, the amount of thought, ingenuity and attention to detail that went into this project is quite astounding and, I guess, that is part of what makes this rifle so alluring.