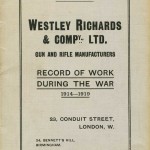 We desire to apologise to our world-wide customers for what may perhaps appear to have been lack of attention in dealing with orders entrusted to us during the war, now happily over and won, and with that thought in our minds we take this opportunity of setting forth the reasons such orders may not have been executed, and in some cases vague replies given in response to enquiries regarding same. 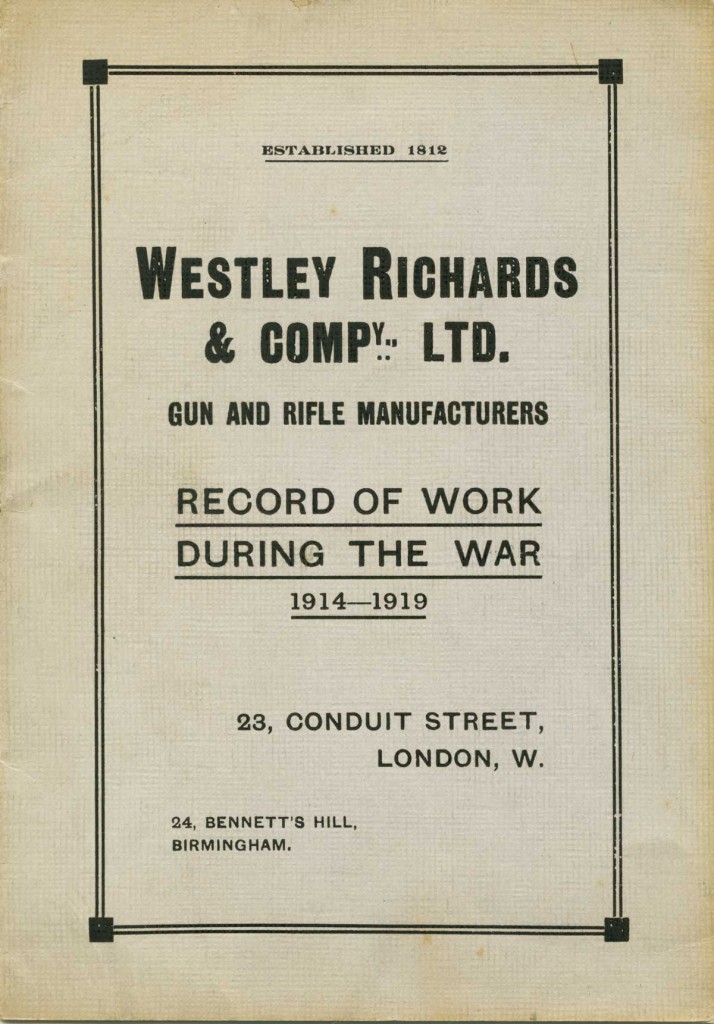 We venture to hope that a perusal of this leaflet will set this matter right and show that the personal attention given to all our customers requirements in pre-War days has only been suspended during the War by Force Majeure, and that in the days to come the same care, and attention, and enthusiasm, which customers requirements- however varied- always received, will again be bestowed.

In the early days of the War our ordinary Sporting Gun Trade was shut down. We sought to find how our factory could be helpful. We received an urgent order from the government to convert ten thousand Service Rifles to a modern type for the use of our Army. This involved certain new machinery, alterations to our factory, and the employment of all our highly skilled labour – and early and late working – for the rifles were badly needed.

The work was exacting and tedious. A government Inspection Department was set up in our works to examine and view the new components needed and made by us, as well as the altered parts in course of manufacture.

The work was carried out successfully by us, and “we delivered the goods.”

Running concurrently with the above, a further contract was placed with us for some thousands of Rifles to have new barrels made and fitted and converted to another type.

This work, done under high pressure, was likewise, carried out satisfactorily by us.

During the running of the above contracts an ambitious scheme was carried through to enable the Government to obtain a much larger supply of Service Rifles for the use of our rapidly increasing armies. It was known as the “Peddled Rifle Scheme.” Its object being to enlist the aid of a number of manufacturers to make an entire Rifle, each firm doing that work it was most fitted to carry out.

We engaged ourselves to supply complete Rifle Barrels – the two sight beds (or shoes), and the complete Back sight and Spring, and Blade foresight – a big undertaking, for each of these 22 components entailing in all several thousand different machine operations besides delicate hand work had to pass the strictest Government view – many of the components being dead size and the majority with tolerations of only .002 inch and this too, at many gauge points.

We put in many thousand pounds worth of new machinery ; a large extension was made to our Works and a new power station five times larger than the old laid in.

In due course the new work began to come through and when in full swing, nearly one thousand complete barrels and sights were produced weekly, in some weeks many more than this being done.

Our working staff increased four fold, and large numbers of unskilled men and boys were trained by us to do most delicate work.

To obtain this great result every ounce was got out of our plant – our works ran day and night. Our week starting at 7 o’clock Sunday evening and the machines were running without stopping except for meal times until 5 o’clock the following Saturday afternoon, but in addition, certain machines were always run on Sunday mornings and not infrequently during the afternoons as well.

The weight of steel used by us in the production of these barrels and sights weighed nearly 400 tons.

We designed and made in our works all our Tools, Gauges, &c., and also many machines for doing special work that we could not buy from the recognised machine makers.

In one instance, we required several machines made by a well known firm of Engineers, but they were full up with orders for big shell lathes. We got out of the difficulty by purchasing from them the wood patterns for casting the beds, and the drawings, and we made the machines ourselves and incidentally one for another manufacturer, after having improved the machine by increasing the output, These were not small machines either, weighing complete probably two tons each.

Several of our own designed and manufactured machines have been adapted (with our cheerful assent) by other firms. The Engineer of one large factory known throughout the world asked to be permitted to copy our design for improved and increased output. The quality of our work in this barrel and sight department has been proclaimed by universal consent to be second to none.

In addition to the large output of barrels and sights referred to above, we took on other work for which very little machinery was needed.

Notwithstanding the service already recounted, the Government required assistance on other specialized work which they had difficulty in getting done.

They had large quantities of damaged rifles being salvaged from the various battle fronts and sent back to England to be repaired and renewed and made fit for service again. We were asked whether we could undertake this work, the rifles in some instances were in terrible state – blown up, burnt, mud covered, parts missing – and to the uninitiated in a hopeless state. They had to be repaired and made fit for the firing line again, for every rifle saved in this way was equivalent to a new rifle manufactured and the armies were growing faster than the rifles could be produced.

We undertook to do this work also and established a Special Rifle Repair Department and although the ‘Powers that be” entertained a doubt as to our ability to do this work, we did it so thoroughly and so expeditiously that time after time our contract was increased as the needs arose.

The work entailed stripping of every component, cleaning, repairing, re-browning and doing up as new, all done in our own factory. We did in some weeks nearly two thousand rifles and every rifle had to be shot for accuracy and pass the Government test before being accepted and passed for service again for use at “the front.”

It is interesting to note that many of the rifles bear our marks as having been through our hands several times testifying to the great service they have seen.

Counting all the rifles we have dealt with during the War, we find that close on two hundred thousand rifles have been stripped and converted or repaired, overhauled, and done up as new, and shot on our grounds, and this in addition to our manufacturing well over one hundred thousand each of rifle barrels , sights, beds, etc.

In addition to these contracts, others have been carried out by us, such as sight leaves, pins, washers, etc.

We have made and delivered nearly 140,000 of the large back sight springs for the service rifle and many thousands of wood fore ends for military rifles, all to the most exacting gauging and viewing.

It is generally conceded that no factory of the size of ours has had such a record for fine work, of so many varied kinds (comprising thirty separate contracts)’ and so large an output.

To carry out this great task we have not engaged the services if a single new leader, either in the management or personnel of the works, not withstanding, that most of the work was quite new to us. We have made gun workers into tool makers, guage makers, machine charge hands, instructors, viewers, etc., etc.

With few exceptions all this mass of work has been Government gauged, viewed, accepted, and despatched by the Authorities from our works, a large Government inspection department having been set up in our factory.

It is well – known that for theh past 60 years no service rifle has been made without our patented improvements having been embodied, the bolt head in all service rifles made during the past 30 years being our invention, and during the war we again submitted improvements to the back sight of the present L.E. Rifle which the Government accepted and adopted and which have been made by us and all other rifle makers for some time past.

Having become a “Controlled Establishment” in the early days of the War, we were subject to conditions restricting our normal business, and acting under instructions we had to leave it to our customers to assume why we were unable to attend to their requirements, or even to say why we could not do so.

We have now complete our “War Work,” and are re-constructing our works for our normal productions.

By means of large and important additions to our plant and of extensions to our works we are in a favourable position to resume our special pre-war work. As in the past we shall only offer weapons of the best craftsmanship and highest efficiency that will thoroughly maintain the quality of fine and thoughtful workmanship which has given to our productions the unchallenged individuality acknowledged the world over for mechanical efficiency and superior design.