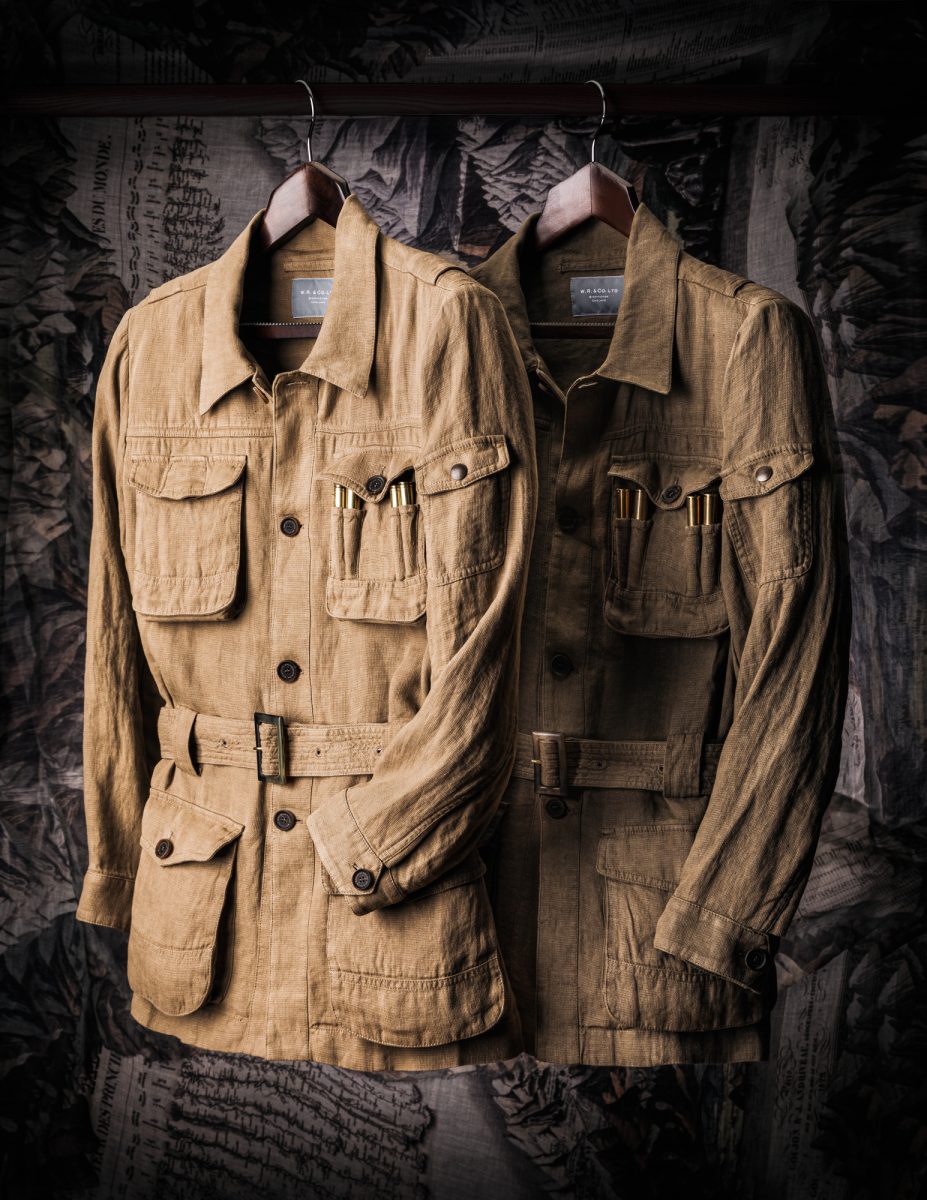 The safari jacket is cool, convenient, stylish and modern. You will be equally chic if you time travel 150 years back wearing it. Well, perhaps not so modern, since the concept of this practical garment was born amid black powder smoke, a hail of bullets and blood on the snow of the Hindu Kush. Afghanistan has been a deathtrap for invaders for the last three centuries – and the first to learn this hard lesson was Sir William Elphinstone.

In January 1842 he decided to pull his 16,000-strong force out of Kabul and back. But the colourful uniforms of the retreating red coat invaders stood out like cherries on a chocolate cake – ideal targets for Afghan snipers, who blended into the landscape, camouflaged by dusty garments. A single European soldier on a limping pony came out of the massacre alive, a surgeon with a piece of his skull missing.

The camouflage lesson was not lost on some military commanders, who adopted dust-coloured uniforms a few years later in Lahore in the recently annexed Sikh Empire. They were the only ones to defeat the Afghans in 1200 years and acted as a buffer for British and Afghans for over half a century – the word “khaki” was born, derived from a Persian word meaning “dust”. In 1846 a British lieutenant called Hodson chose a light-coloured khaki uniform for the Corp of Guides. During the Indian uprising of 1857, it was Hodson and Man Singh (shown in image), a Sikh, who rode in khaki to arrest “The Last Mughal” and raise the Mughal Empire into dust. 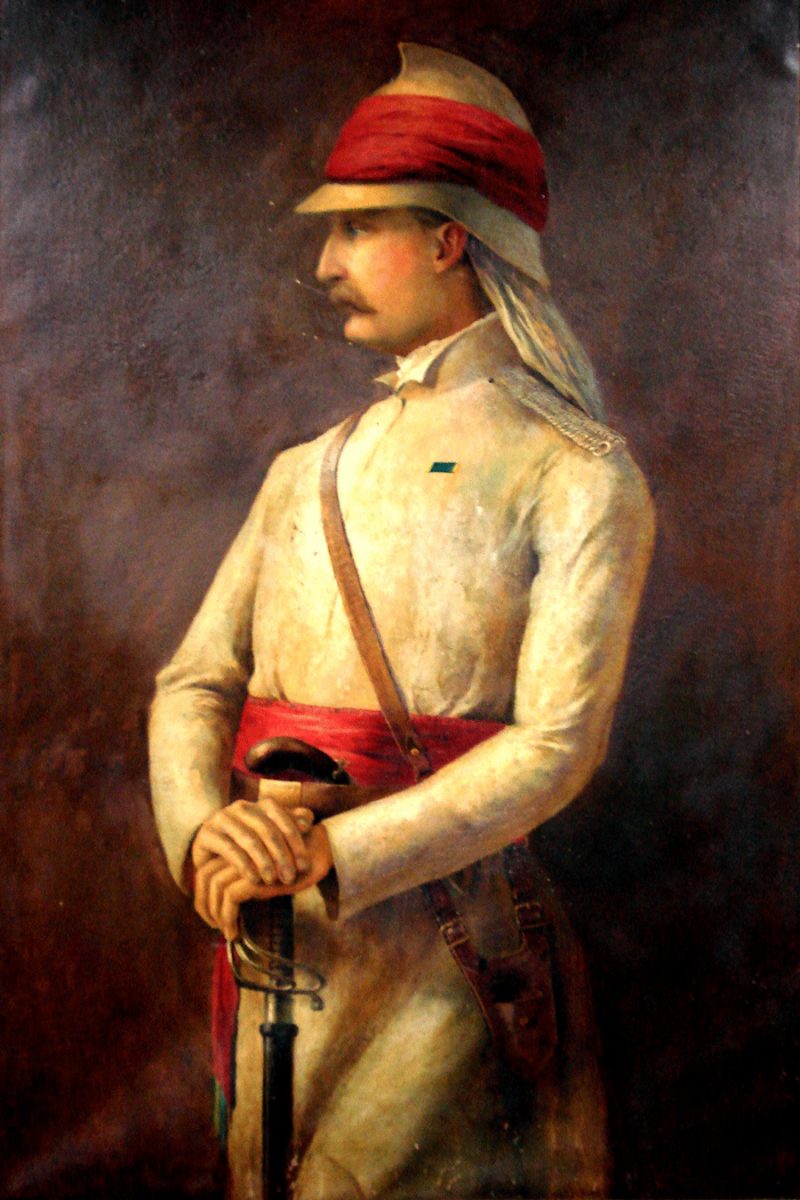 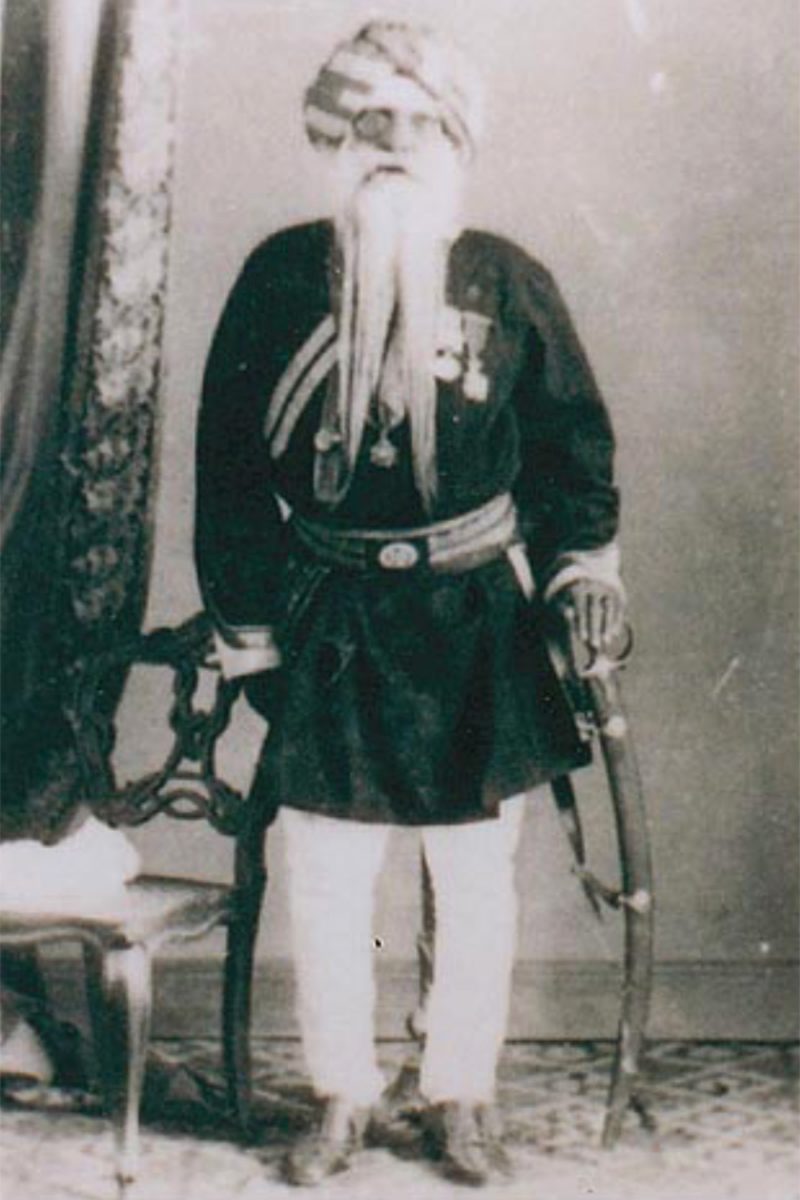 There are two different schools for the origin of khaki. Some say Hodson's commanding officer bought white cloth in the bazaar at Lahore, then had it dyed with mud from the river. But there are letters that prove Hodson asked his brother in England, the Rev George Hodson, to send  “drab” uniforms for 900 men as well as 300 carbines & helmets. He thanked his brother a year later, writing: “Many thanks for the trouble you have taken to clothe the guides. Sir Charles Napier says they are the only properly-dressed light troops in India.” The men in these uniforms were known as Mudlarks, or Khakis.

The sporting life was an integral part of the British rule in India. And khaki uniforms began to morph into hunting garb. The needs for camouflage and practicality were equally important - but hunters didn't wear leather pouch belts for ammo. So capacious pockets began to appear in a garment which came to be described as the Shikar Jacket. Shikar is a Hindi/Urdu word for hunting, derived from Arabic and Persian. 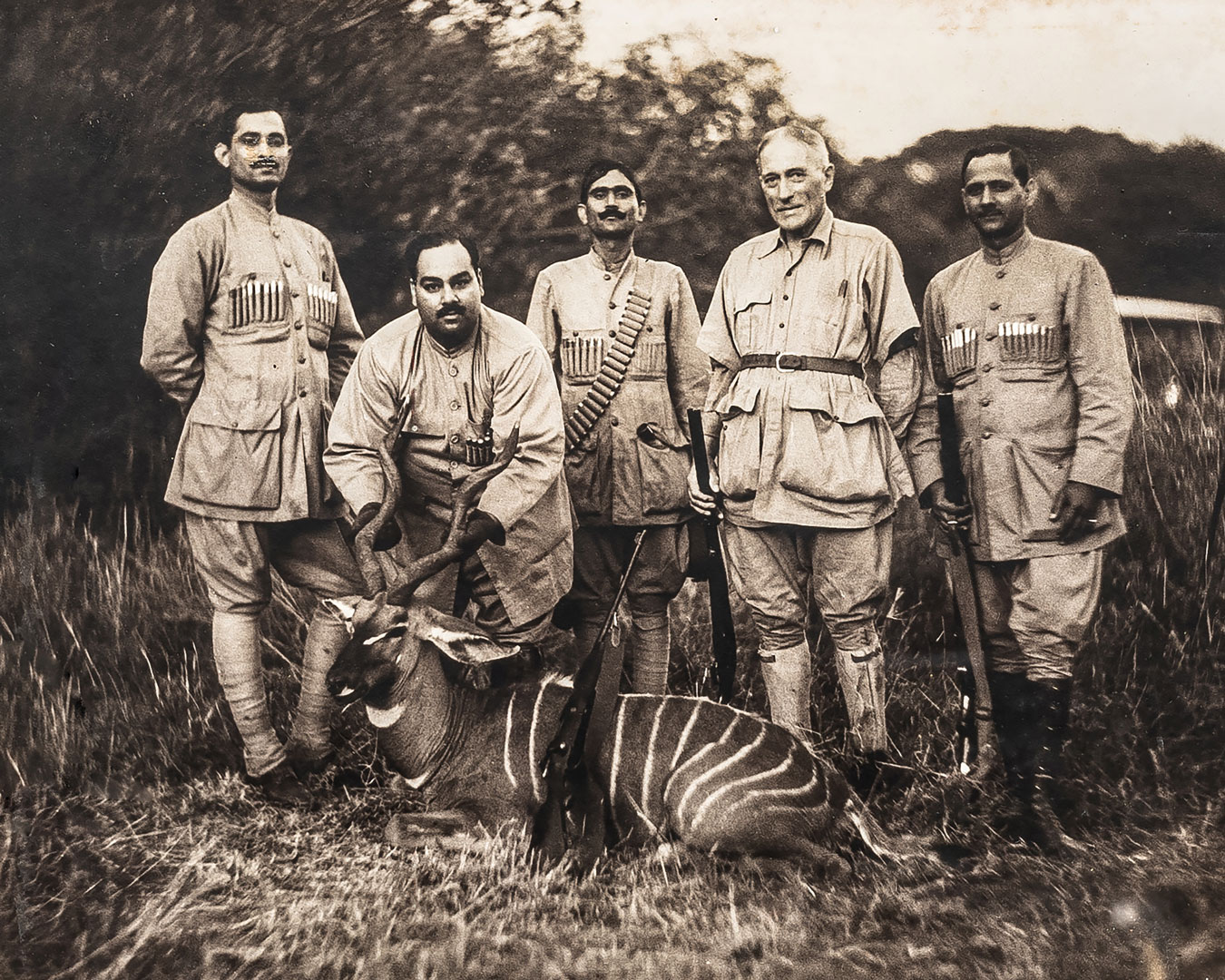 In his book The Wild Sports of India (1860) Captain Henry Shakespear wrote:

"The season of the year must regulate your clothing, both as to its texture and colour; and the peculiar tint of the jungle you are going to shoot in, at the time of year, must tell you what shade of colour to dye the cloth, of which your shikar clothes are to be made. The babool, which is a thorny tree with a little yellow button-blossom, affords the best dye. The bark is stripped off it, and boiled in an earthen vessel, and then the addition of some of the bark of the mango will give it the tinge required. This is always an excellent dye, because it is permanent, and of a neutral tint, something like the leaf, grass, and ground, blended together. The babool-bark dye is a dark brown; the mango bark is nearly yellow; and the two mixed can make any dye desired.

The marking-nut tree, called the hecrakup, gives a darker dye than the babool, but it is too dark when used alone, for any season or jungle. Enough light cotton cloth, if for the hot weather shooting, to make clothes for yourself and two shikarees, is put into the vessel. A coarser, close-woven cotton cloth, impervious to the spear-grass, which is very troublesome in some jungles, and not got rid of till the grass is burnt, is to be procured, if possible. It is called charsoutee, that is, a four-thread woven cloth, and is the best for the cold weather, and until the end of February.

I never wear in India a shooting coat of English make or manufacture, i.e. with tails, because, firstly, they would be torn off in the thorn jungles and impede my progress and secondly, as we do not carry our own game, they would be of no use. My shooting-jacket is made about four inches lower than the waist, and has pockets in front, five in number; that is, one for the shikar knife, under it one for a small telescope about three inches long - these are on the left side: on the right the upper pocket is meant to carry a small powder-flask with a large charger, then comes a small pocket for a few caps, and the fifth for half-a-dozen bullets and your handkerchief. A coat or jacket made like this does not shake about, and sits close to the person both in galloping and running."

We find many references to shikar tailoring. By the 1850s, Wilkinson & Co of Pall Mall was advertising shikar jackets. Many contemporary illustrations show designs for collars, lapels, pockets, belts, and epaulettes. A shikari jacket had to be the height of fashion, since the hunt was a political show of strength – as well as an exuberant interaction between the maharajahs and the Raj. That's why we see the finest firearms come out of the Indian subcontinent during the 19th and early 20th centuries, along with hunting garments.

In the British Empire, shikar was a more commonly used word than safari. There are no 19th century references to safaris or safari jackets. In Arabic, “safar” means “journey”. Slave traders took the word into Swahili as “safari” and it was used in the writings of authors such as Sir Richard Burton, H. Rider Haggard and Jules Verne. The Americans never really liked to follow the British line and had their own take on things, so the term safari gained popularity after Teddy Roosevelt's hunting trip to Africa. For America, the word meant an African hunting expedition. Indians still talk about a shikar. 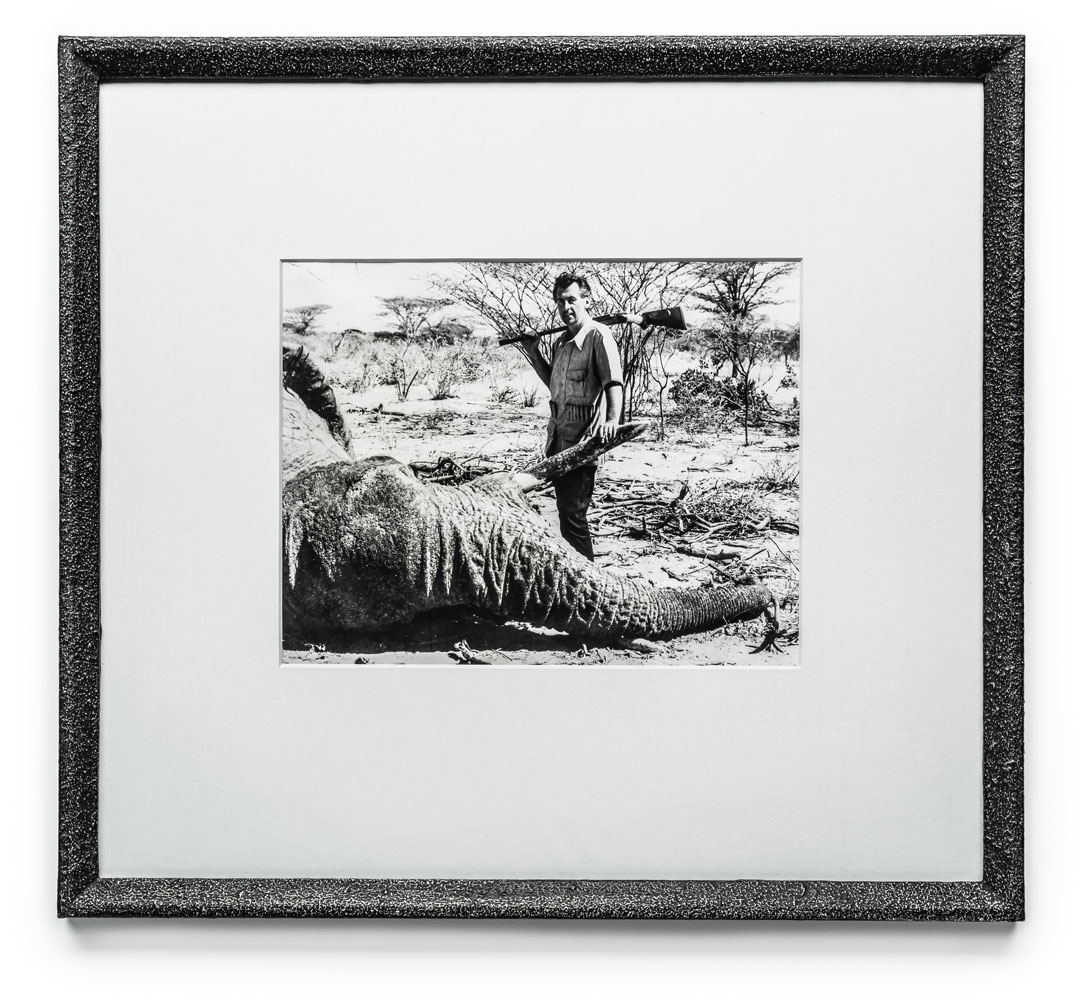 The introduction of railways, better sea travel and ultimately airlines, made Africa and India more accessible to many. It became fashionable to go shooting in Africa and India, dressed for the part. The need for outdoor clothing increased as the world shifted to the marketing of brands. In 1936  Ernest Hemingway designed the Bush Jacket for Willis and Gieger Outfitters, and soon Abercrombie & Fitch had a Safari Jacket in their catalogue. The safari jacket got added exposure through the cinema. Leading men like Stewart Granger, Clark Gable, Robert Mitchum and Rock Hudson took it to new heights of elegance. Then in the 1960s Ted Lapidus of Yves Saint Laurent brought the Safari Jacket into mainstream fashion. Today, a fellow's wardrobe isn't complete without one of the dust-coloured bullet dodgers from the Hindu Kush. 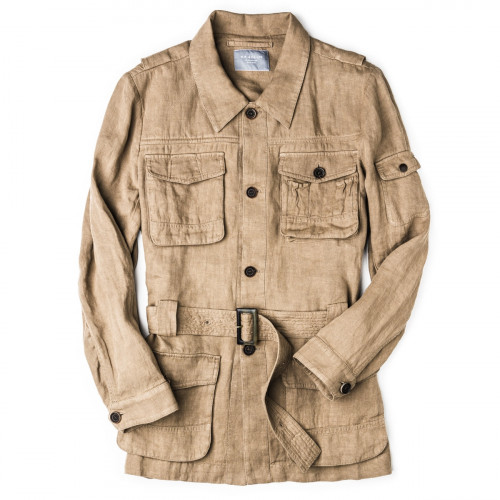