Each of the great British gunmakers not only have their own unique actions but also a unique and readily identifiable “house” engraving that normally adorns their best quality guns and rifles. A couple of England’s makers are also well known for their guns that were left without engraving.

While most makers made guns with no engraving at one time or another, usually at the behest of the  new owner, there are two firms who actually made quite a few like this.  The first maker that comes to mind that regularly offered and made guns with no engraving, is Westley Richards. The firm’s Best Quality – Plain Finish hammerless gun, known colloquially as a gold name, was a gun with an action that is color hardened and devoid of any engraving save only for the maker’s name inlaid in gold. Westley’s has offered such guns throughout its history and guns and rifles like this still dot our new gun order books.

The other maker that is somewhat well known for producing guns with no engraving is J. Purdey & Sons. Often referred to as “funeral” guns or “black widows”, these guns have smooth lock plates with a black finish. The various legends behind why these guns were made with no engraving vary, from supposedly mourning the passing of Queen Victoria or the fact the new owner did not return from the Great War. Hearing stories about such guns early in my career made them seem somewhat mythical to me. Turns out, these stories were just that…myths, but the guns are anything but imaginary. 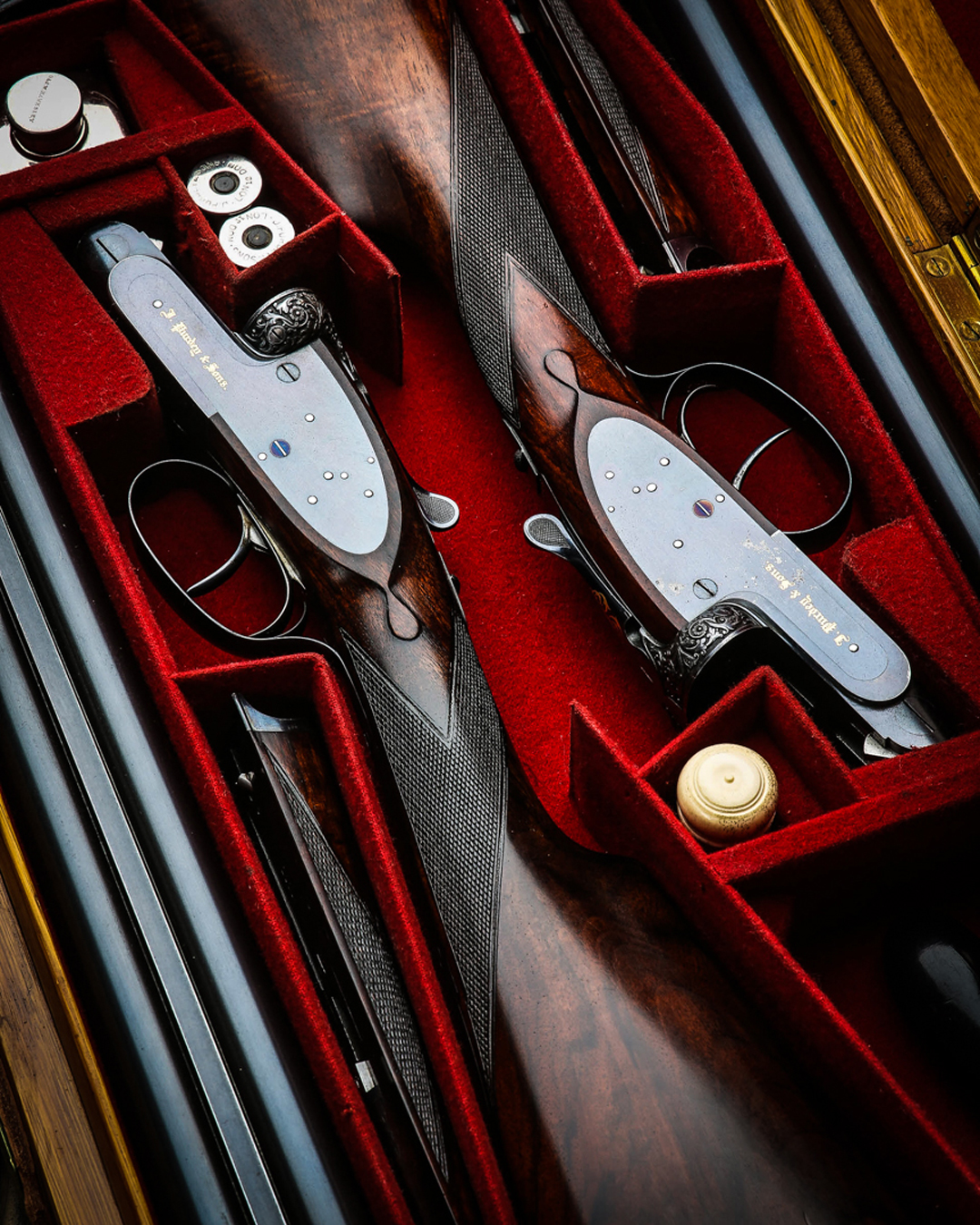 There is an excellent on-line article entitled: The Myth of the Black Widows, The Real Story of Guns “In the Black” written by Purdey’s Gunroom Manager, Dr. Nicholas Harlow and featured on The Vintage Gun Journal in December of 2019. In addition to dispelling the myths about these guns, he reveals that there were two different types of guns made by Purdey’s with no engraving and he gives some very interesting statistics on the guns that left the factory like this each year between 1884 and 1926.

One way guns with no engraving were noted in the factory ledgers was “out in the black”. According to Dr. Harlow’s article, the peak of production for guns with no engraving clearly line up with years that Purdey’s production was the highest. He also point out, not surprisingly, these same years were also what many consider the heyday of Britain’s driven bird shooting.  He concludes the reasons these guns were sent out “in the black” with no engraving, was a rush to get to their new owner in time for some shooting, with the intention of returning them to be engraved and finished once the season was over.

The other category of guns with no engraving are noted in the ledgers as “unengraved” or “no engraving”. These guns were considered “finished” and were intentionally ordered without Purdey’s well known rose and scroll engraving. As Dr. Harlow shows in his charts, well over 1,000 guns were sent out “in the black” prior to 1926 but in contrast, just over 100 were produced in the same time period that were noted in the ledgers as “unengraved”. A small distinction, but an important one when evaluating such guns from Purdey’s 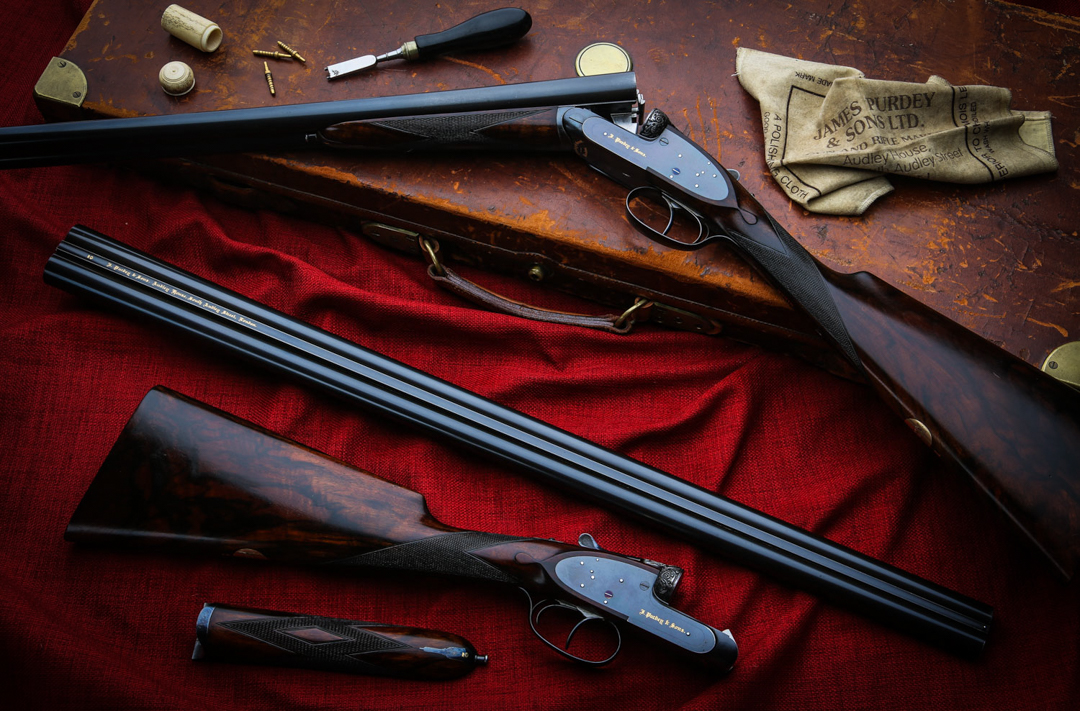 Recently arrived here at the Westley Richards U.S. Agency, is a pair of Purdey’s that fall in the latter category and were intentionally made with smooth lock plates. This pair of hammerless ejector guns was completed in 1922 and certainly are best quality in every respect, featuring many of Purdey’s non-standard upgrades. Made on the famous Beesley patented self-opening action, the guns also have disk set strikers, Purdey’s hidden third grip, and two triggers obliquely cast for a righthand shooter with each of the front triggers “spring bladed”.

The lock plates are smooth with no engraving showing only the pegs, pins, and ribbed cocking indicators of the lockwork, along with the maker’s name in Olde English letters boldly inlaid in gold on the leg of each lock plate and the bottom of the action.

The lock plates, action body, and furniture are finished in a deep black the London trade is famous for during this era. There is a gold stylized inlay on each top lever with the serial numbers and “SAFE” inlaid in gold in the same manner. The ledgers call for “chased detonation” which translates into the fences being deeply carved with a vine and flower pattern that contrasts with the smooth surface of the action body and lock plates. The carving and inlays were a specialty of the master Harry Kell and were, in all likelihood, executed by him.

While some Purdey guns sent out “in the black” may have not been considered “finished” there is no doubt this pair of guns, with its bold gold inlays and carved fences, were ordered intentionally with no engraving. The affect of the unengraved lock plates on this pair of Purdey’s was, in fact, in line with the growing Art Deco aesthetic that gained popularity after WWI. The understated look of the guns gives them a sleek, uncluttered appearance which is a hallmark of the Art Deco style. This was a stark contrast to Purdey’s house engraving that features delicate rose bouquets surrounded by an intricate scroll, a style credited to Purdey’s engraver James Lucas. Purdey’s famous rose and scroll engraving was more indicative of an Art Nouveau style in which the Art Deco movement was a direct response to. The purposeful lack of adornment along with the extra options and upgrades like the third grips and hinged front triggers, are clear signs these guns were well conceived and thought out and in line with trends of the time. Moreover, looking at the quality of the gold inlay and carved fences and the smooth surface of the lock plates, it is obvious these guns were not rushed to meet a deadline or made under the limits of any budget. 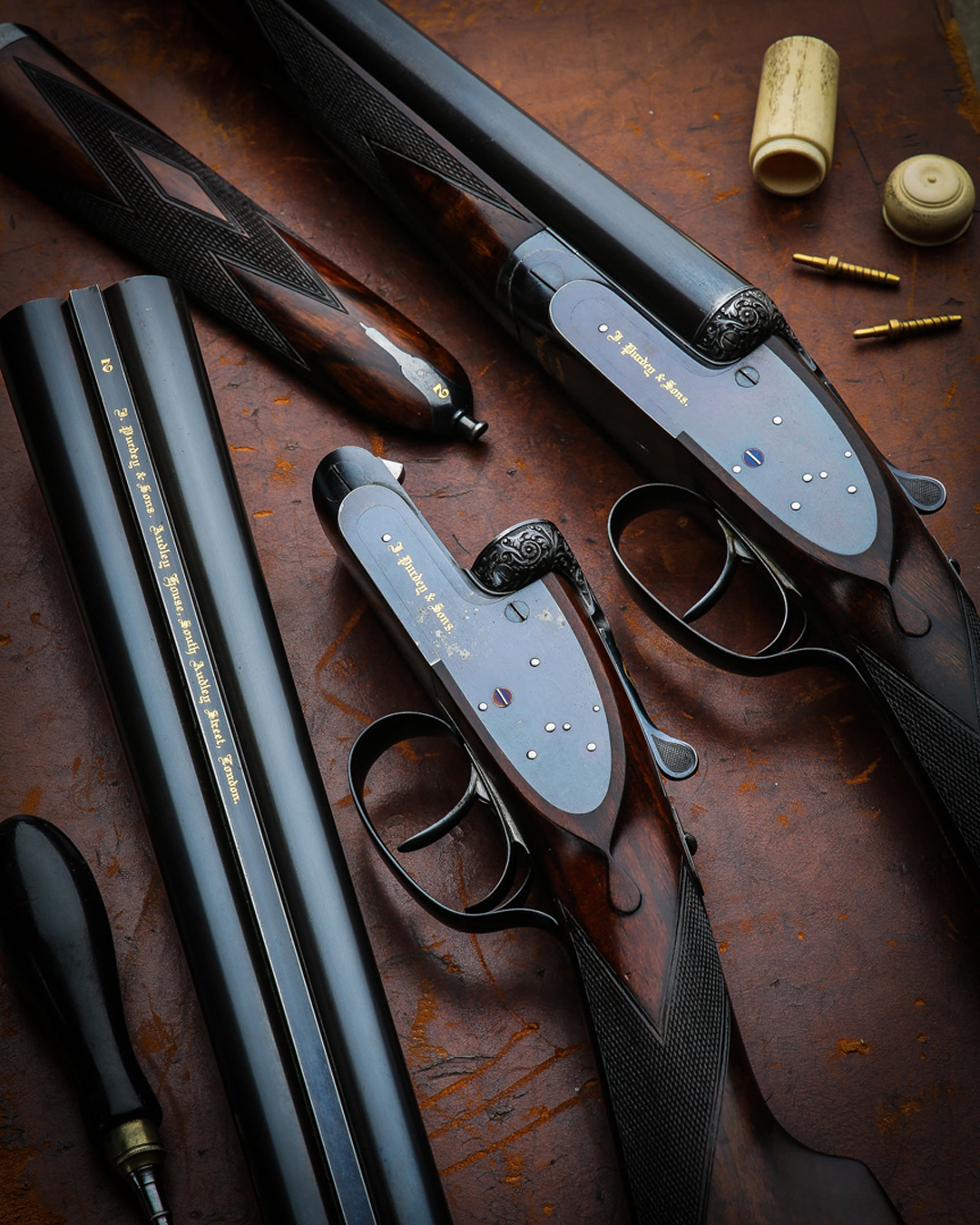 The 29 ½" Whitworth fluid steel, chopper lump barrels have smooth, concave game ribs that are also inlaid in Olde English font with the respective number of the pair on each top rib along with the maker’s name and the Audley House address.

The stocks are nicely figured and have traditional drop points, straight hands, and checkered butts. Each stock oval is engraved with the previous owner’s initials and the corresponding number of the pair inlaid between the stock oval and toe.

The guns are complete in the Maker’s two-gun oak & leather flat case.

These guns remain in remarkably high, original condition with a few blemishes and a softening to the finish that are tell-tell signs of being original. 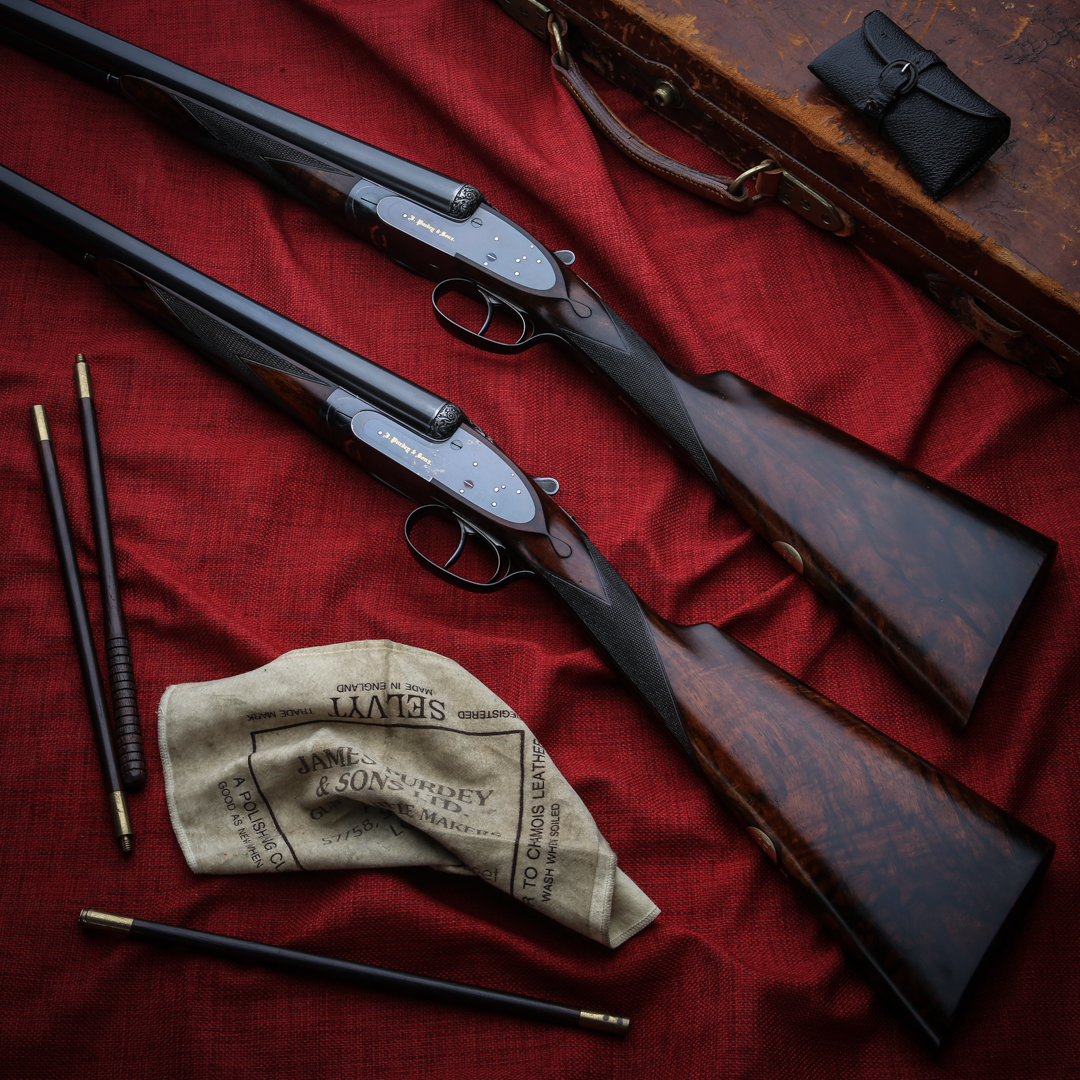 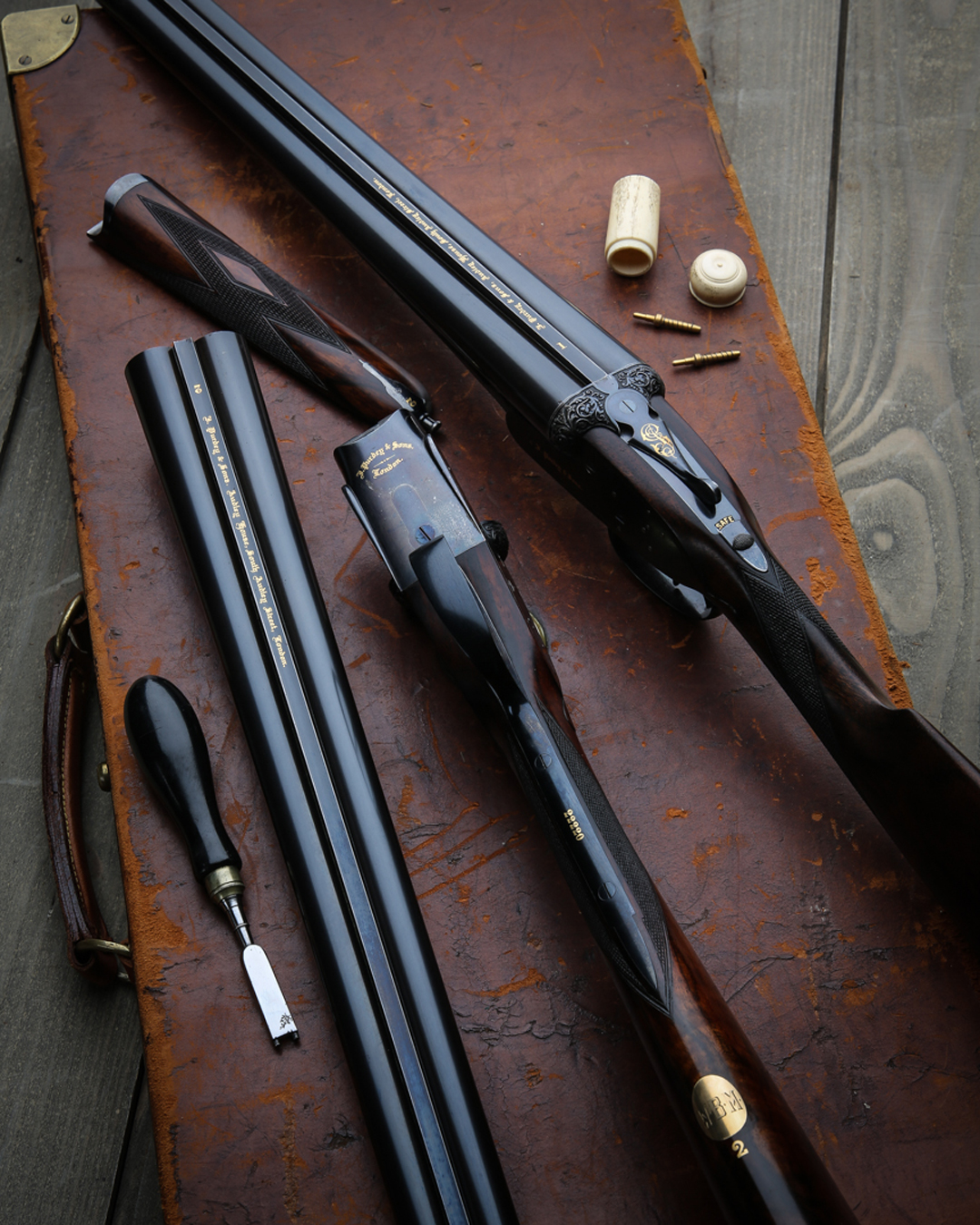 This pair of guns were made with a certain understated purpose and just might be the finest pair of vintage Purdey shotguns I have ever handled.

You can find this pair of guns for sale on the Westley Richards Pre-Owned Shotgun page. 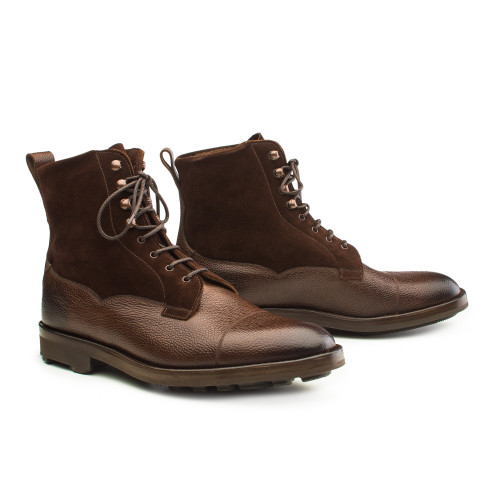 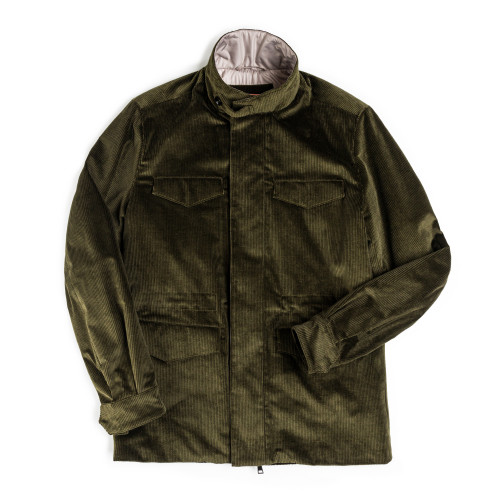 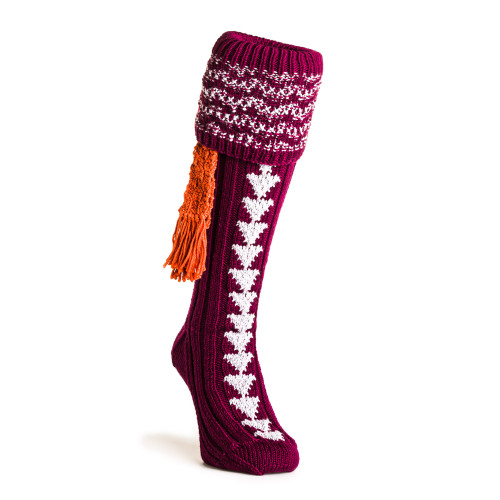