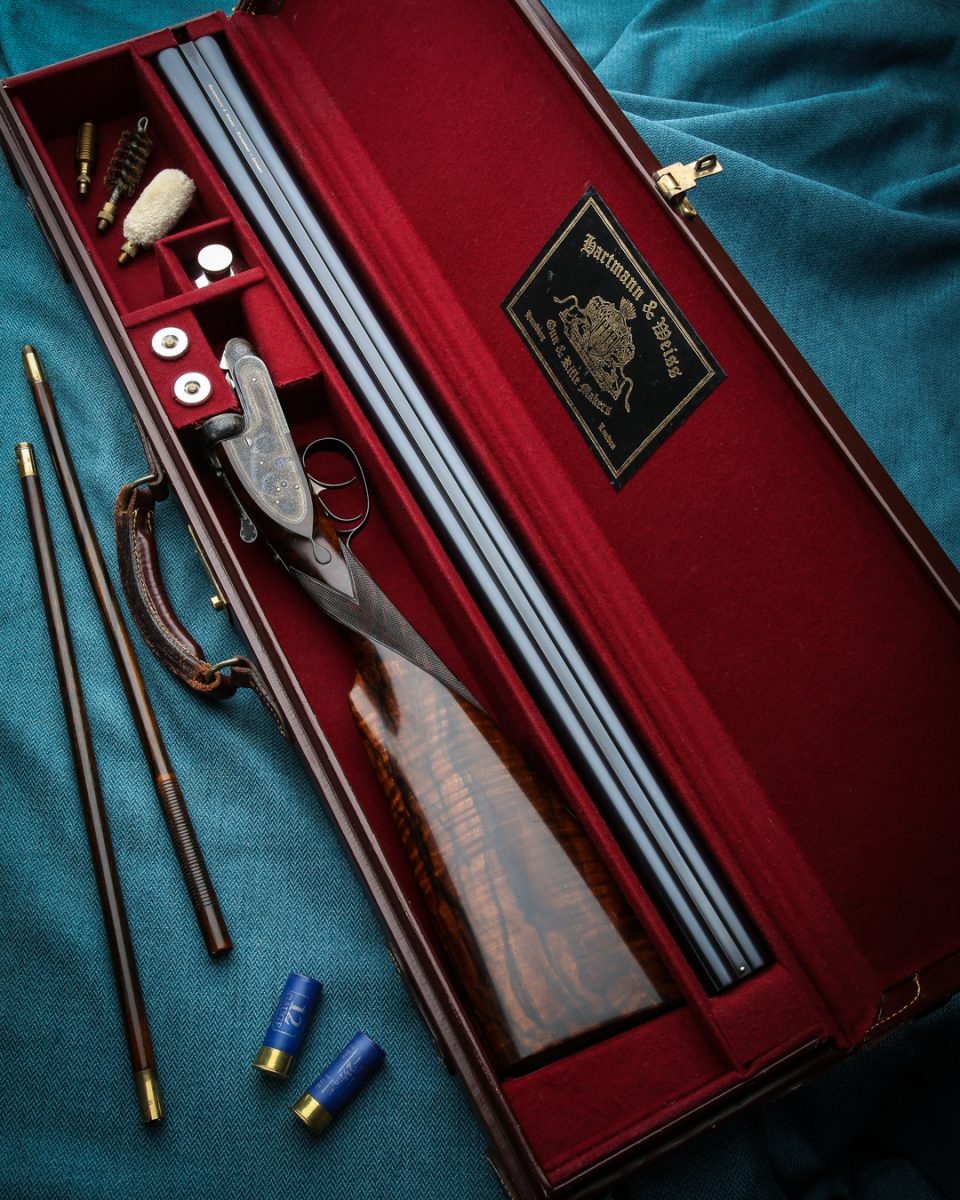 Just sold through the U.S. Agency was a Hartmann & Weiss 12g lightweight game gun. Truly a Best gun in every way, it was well thought out, beautifully made, and is a real joy to handle. It is not hard to see why the firm Hartmann & Weiss is one of the most celebrated gunmakers in the World.

Gerhard Hartmann and Otto Weiss first started working together in 1963 and officially formed Hartmann & Weiss in 1965. Mr. Hartmann served his apprenticeship under a hometown gunmaker before working for Krieghoff for a year. In 1960 he started attending the Gunmaking school in Ferlach, Austria and returned to work in Hamburg a year later. Mr. Weiss served an apprenticeship in the German city of Suhl where, in the 1950’s, he would have been taught by craftsmen who were making guns prior to World War I; the heyday in Suhl’s gunmaking history. After his apprenticeship, he spent time working for the Suhl based gunmaker, Merkel until fleeing Germany just prior to the building of the Berlin wall. In 1961, Mr. Weiss lands at James Purdey & Sons in London where he worked for 3 years until returning to Hamburg as well.

Primarily known as a rifle maker, H&W originally made traditional German hunting rifles such as single shots based on the Heeren action. Also well known for their bolt action rifles, namely their takedown, in 1980 H&W was the first German gun maker to produce the Mauser action in its original design after WWII in Magnum and Kurz sizes.

In addition to their hunting rifles, H&W also makes side-by-side and over/under shotguns in the same vein as London’s most recognizable gun makers and the lightweight game gun featured here is a wonderful example of their early forays into making English style guns. This gun was completed in the late 1970’s and is based on Frederick Beesley’s self-opening action patented and sold to J. Purdey & Sons in 1880. One of the greatest sidelock actions ever conceived, Purdey’s makes the Beesley action to this day. 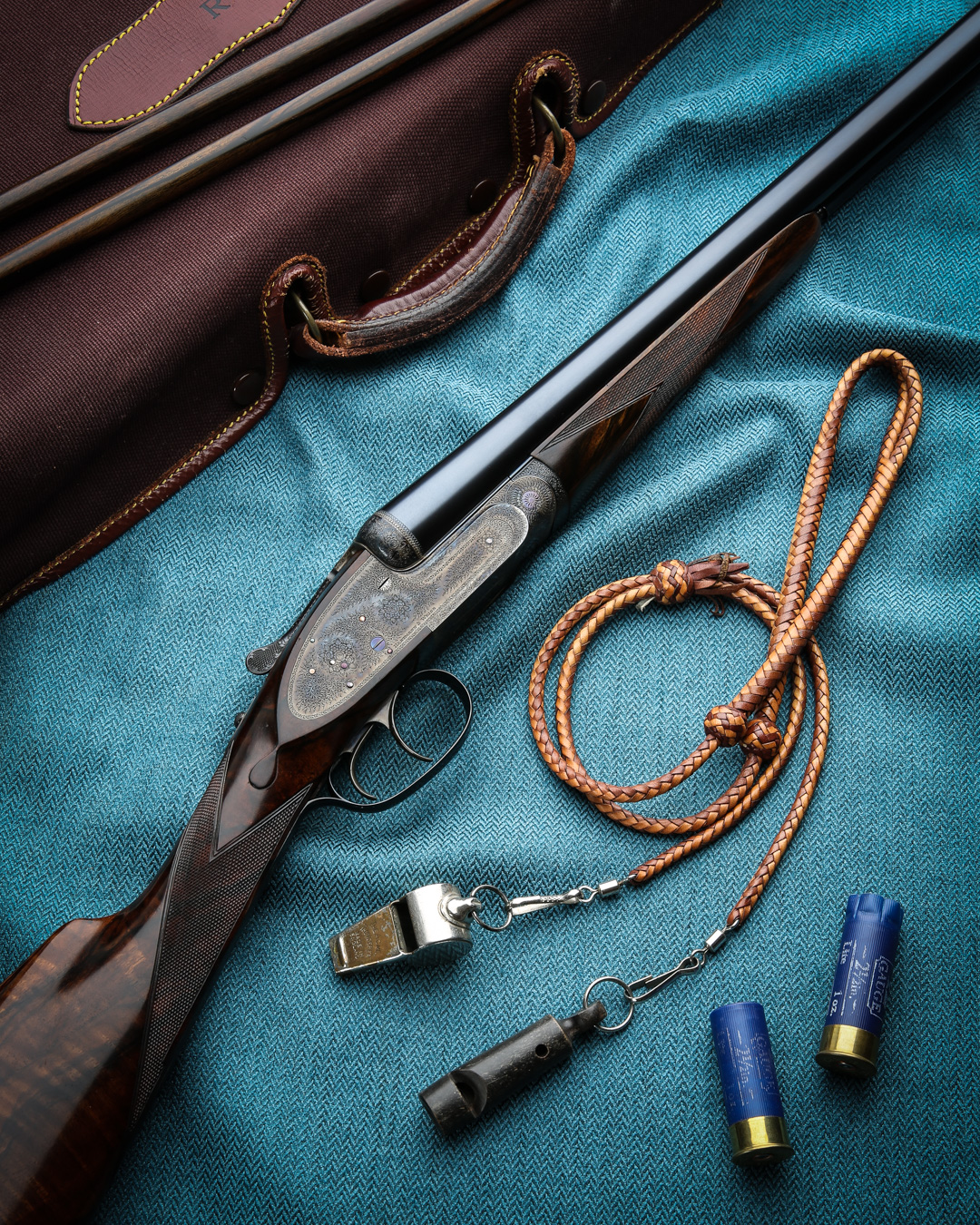 The Beesley patent action is especially difficult to make and the primary reason you do not often see it copied. However, the Beesley action was a specialty of Mr. Peter Nelson who joined H&W in 1971 after serving the better part of twenty years as an Actioner for J. Purdey & Sons.  Mr. Nelson also apprenticed at Purdey’s in the 1950’s under action filers Ernest Lawrence and Ben Delay. Lawrence and Delay had been working for Purdey’s since the 1920’s and 30’s and were two of the firm’s most revered craftsmen. 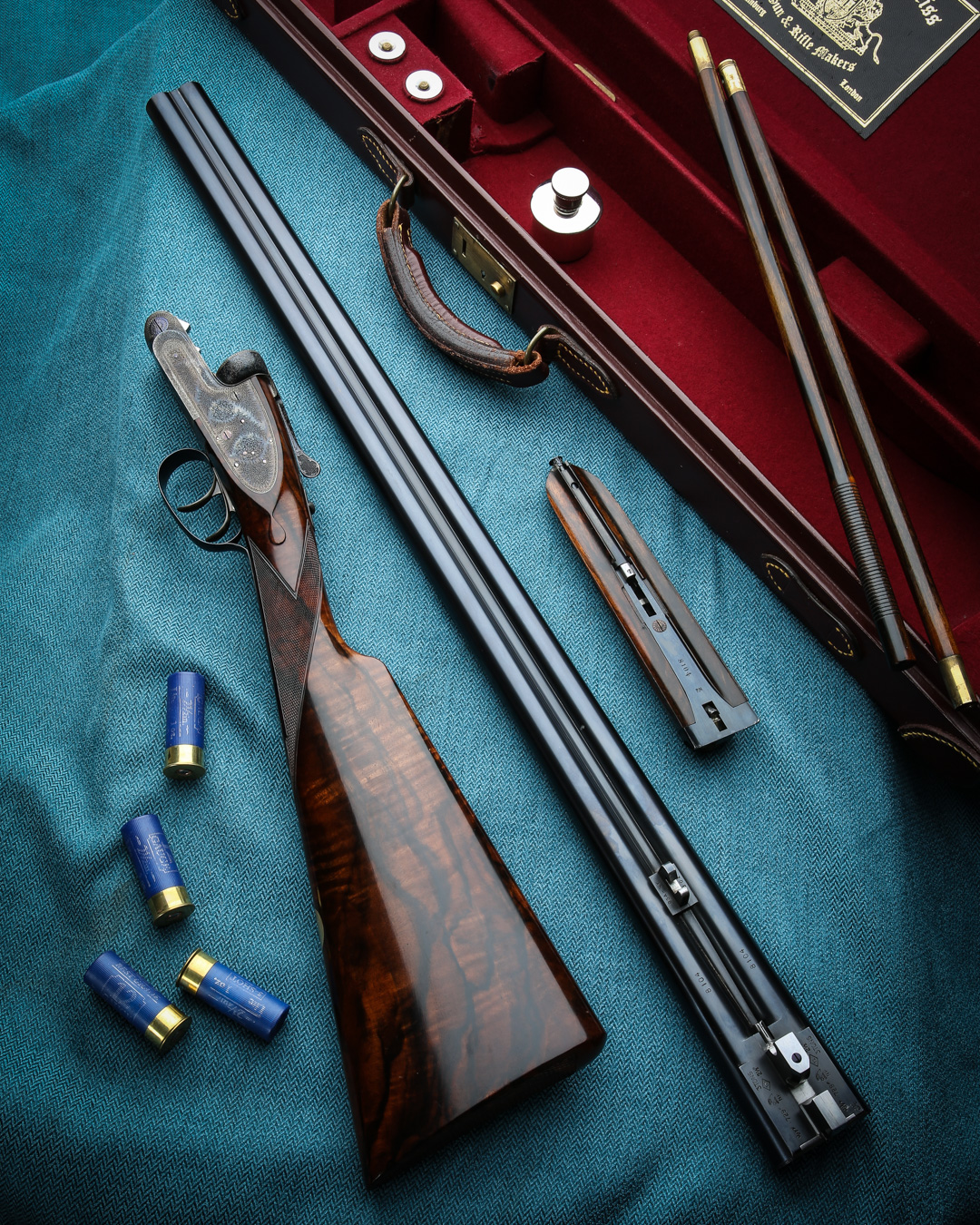 The maker’s initials “PN” are stamped on the forend iron.

Coincidentally, Otto Weiss also worked under Ernest Lawrence and Ben Delay and there he met Peter Nelson, the two becoming close friends. In 1971 Mr. Nelson left Purdey’s and moved to  Hamburg to work with H&W. But missing his English roots, Mr. Nelson returned with his family to London in 1974, opening the London Agency of Hartmann & Weiss. Back in England, Mr. Nelson started making the first shotguns offered under the maker’s name, Hartmann & Weiss. This gun was completed in the late 1970’s and inlayed in gold on the top rib is, “Hartmann & Weiss Hamburg – London”. 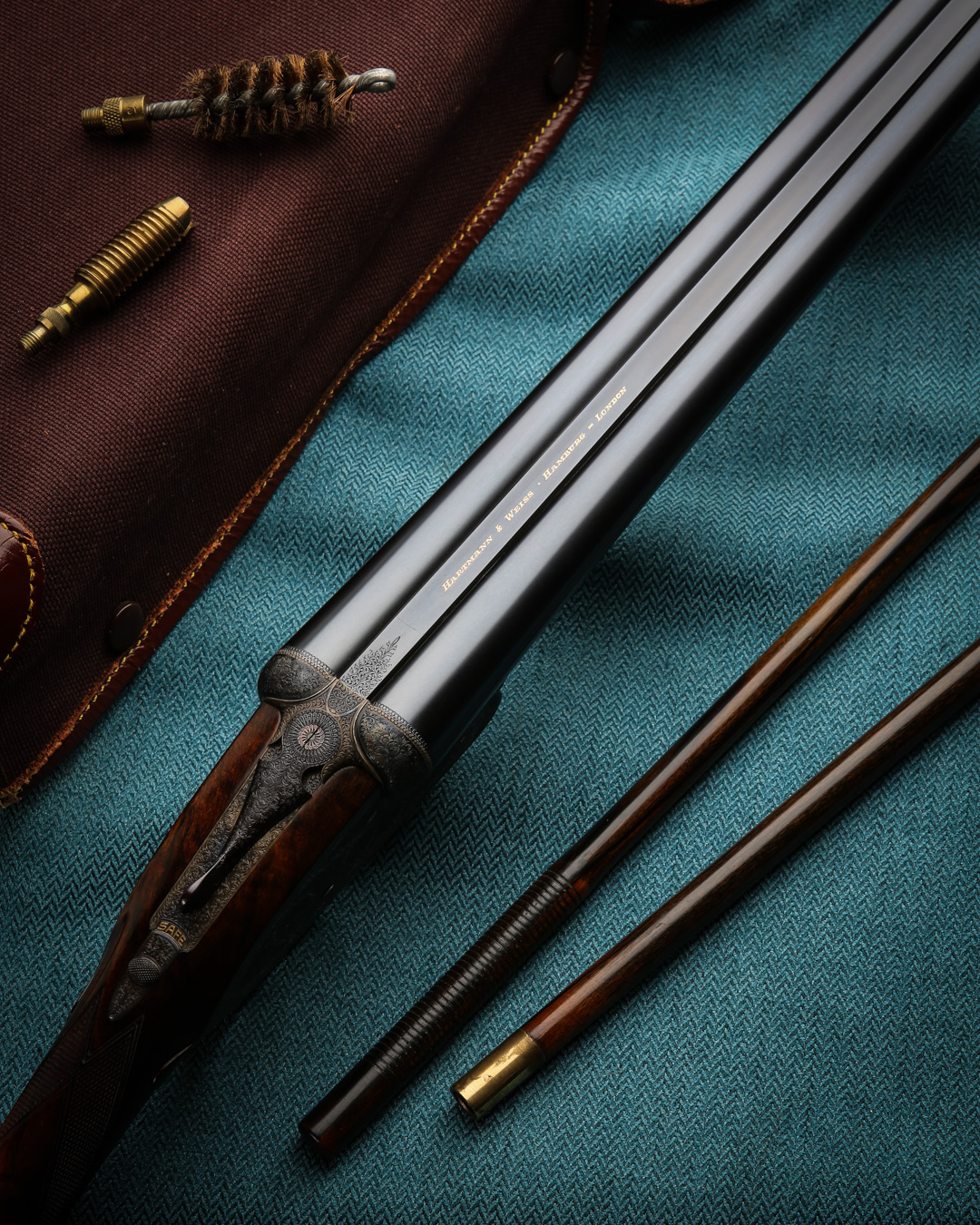 Completed in the late 1970’s, “Hartmann & Weiss Hamburg-London” is inlayed in gold on the top rib

The gun has a classic profile with a straight hand grip and splinter forend, vivid case colors with very well-cut Rose & Scroll engraving by German engraver, Heinz Funk. Despite being ordered in an era where short barrels were the rage, this gun is made up in a very desirable configuration by today’s standards. Built as a lightweight walk-up gun weighing only 6 lbs. 6 oz., the 29” barrels were expertly struck and bored with original 2 ½" chambers. This is one of only two or three guns made by H&W with the shorter chambers. You get the benefit of a 12g pattern in a gun that carries and handles like a 20g, the best of both worlds really. 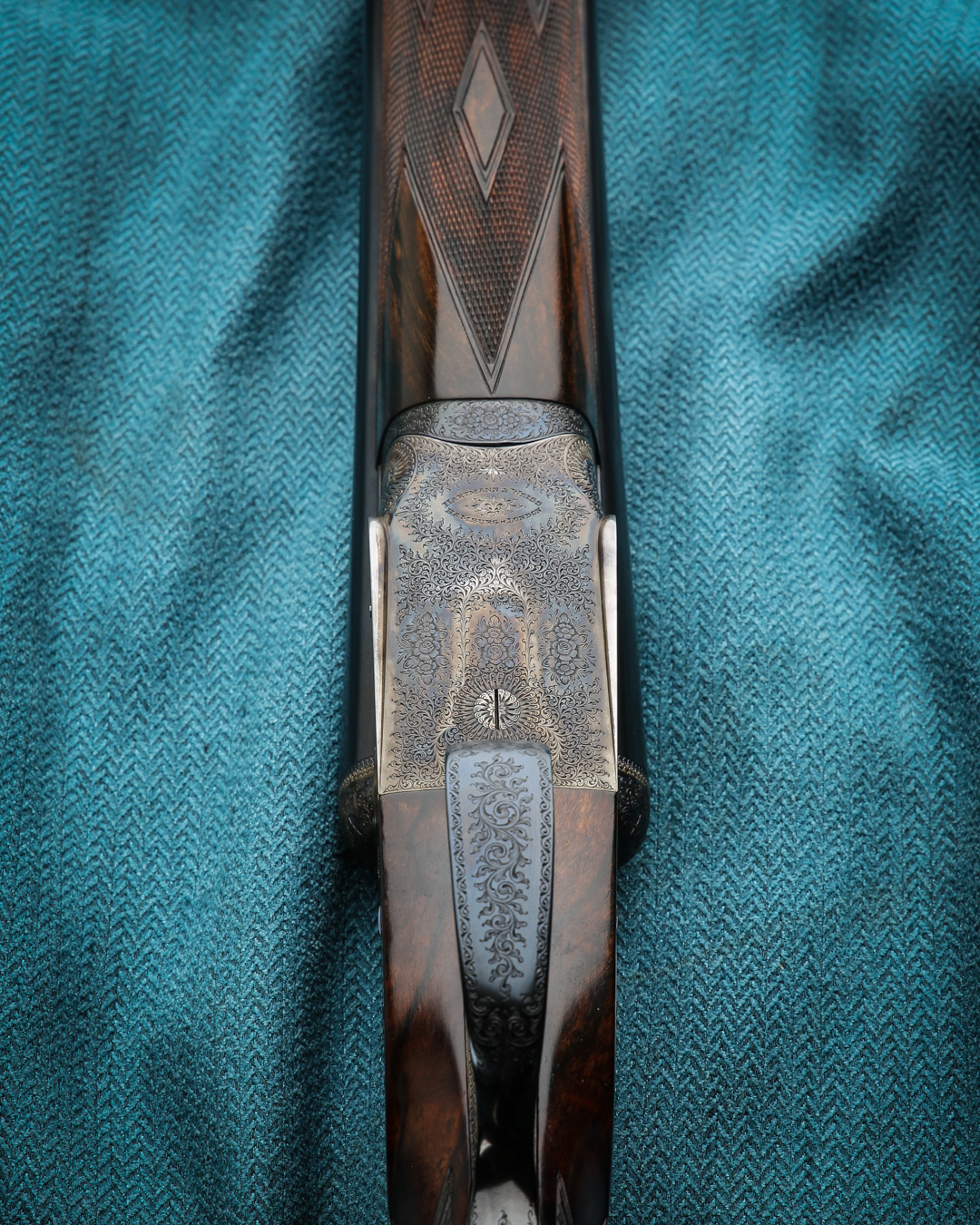 Like Otto Weiss, Mr. Nelson also learned from craftsmen who had seen some of the best days of gunmaking and the quality of their work displays the connection they have to the days of old. These men are now considered some of the finest craftsmen to ever serve at a gunmaker’s bench. As would be expected on a gun with such a pedigree, this gun was built to the highest standards. Not only is the fit and finish superb, but it is light and lively in the hands and would, no doubt, be a joy to carry and shoot in the field. 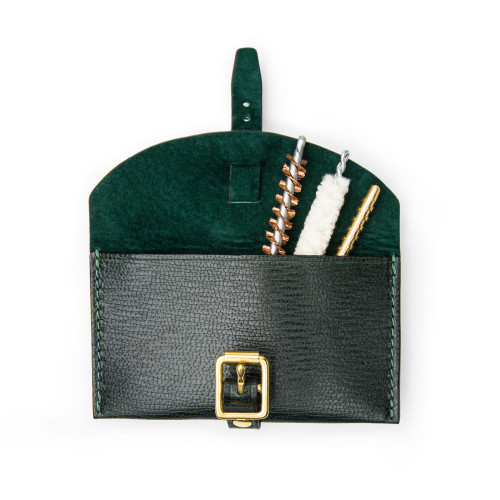 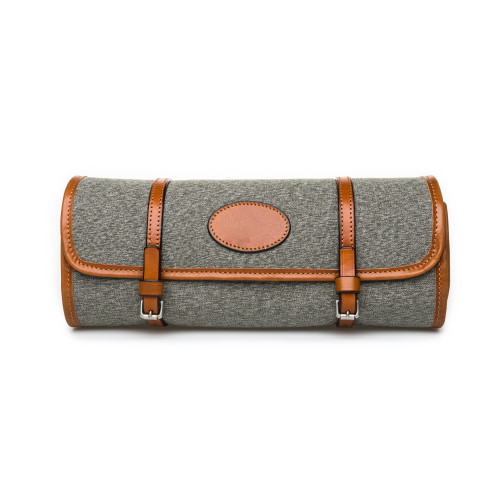 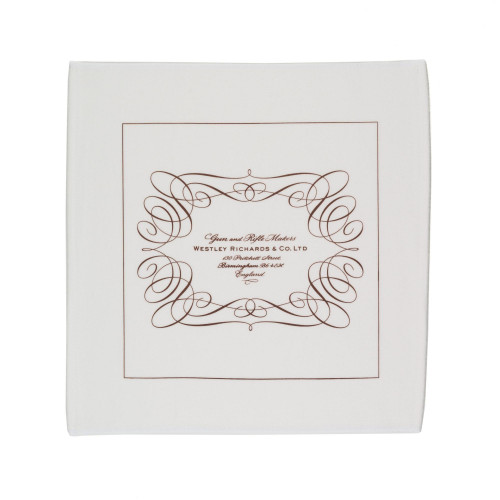