Just arrived at the U.S. Agency are four outstanding Westley Richards bolt action magazine rifles featuring very rare options and configurations offered by Westley’s prior to World War II. Rarely do rifles like these come to market but to have such a variety, in such high, original condition is remarkable.

This represents only a good opportunity to boost up a rifle collection, it offers a chance to see rifles from both the pre-war and between-the-wars eras with special options usually only seen mentioned in the company’s past catalogs.

The first rifle by year of manufacture is this Westley Richards & Co. .318 Accelerated Express “Light Model”. This was a lightweight alternative to the firm’s standard Model Magazine Rifle that was  normally fitted with a 26” barrel and had a weight around 9 lbs. the “Light Model” weighed around 7 lbs. and had a shorter barrel and overall length. The rifle shown here, #LT39452, was shipped in 1913 and is chambered in the firm’s iconic .318 Accelerated Express. This is a Best Quality rifle with house engraving, Westley’s combination foresight and registered sight hood and, true to being a “Light Model”, the rifle has a 22” barrel and a 43” overall length. This model appeared in Westley Richards catalogs throughout the first half of the Twentieth Century and was described as: “extremely handy for snap shots in hill shooting”. 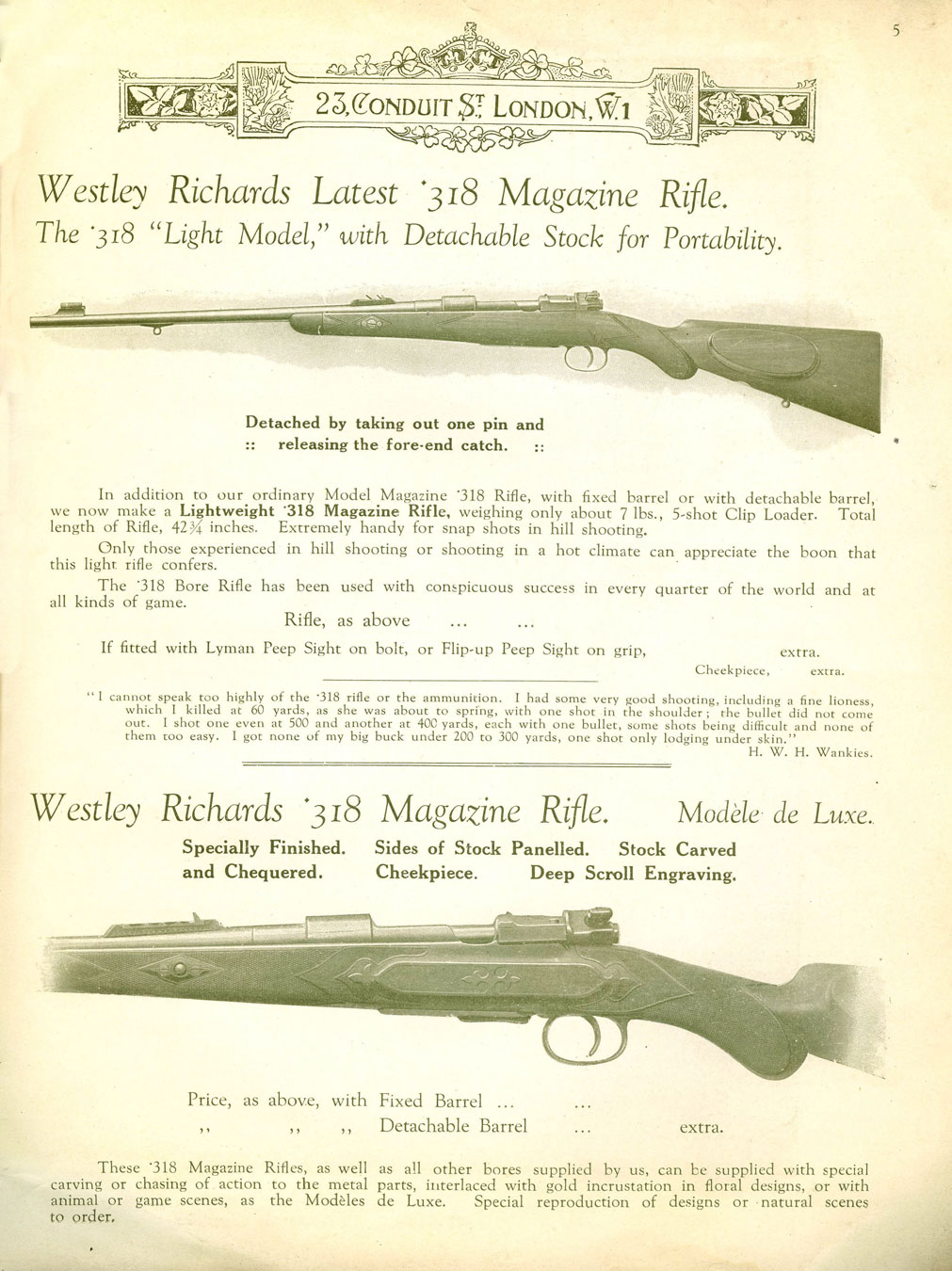 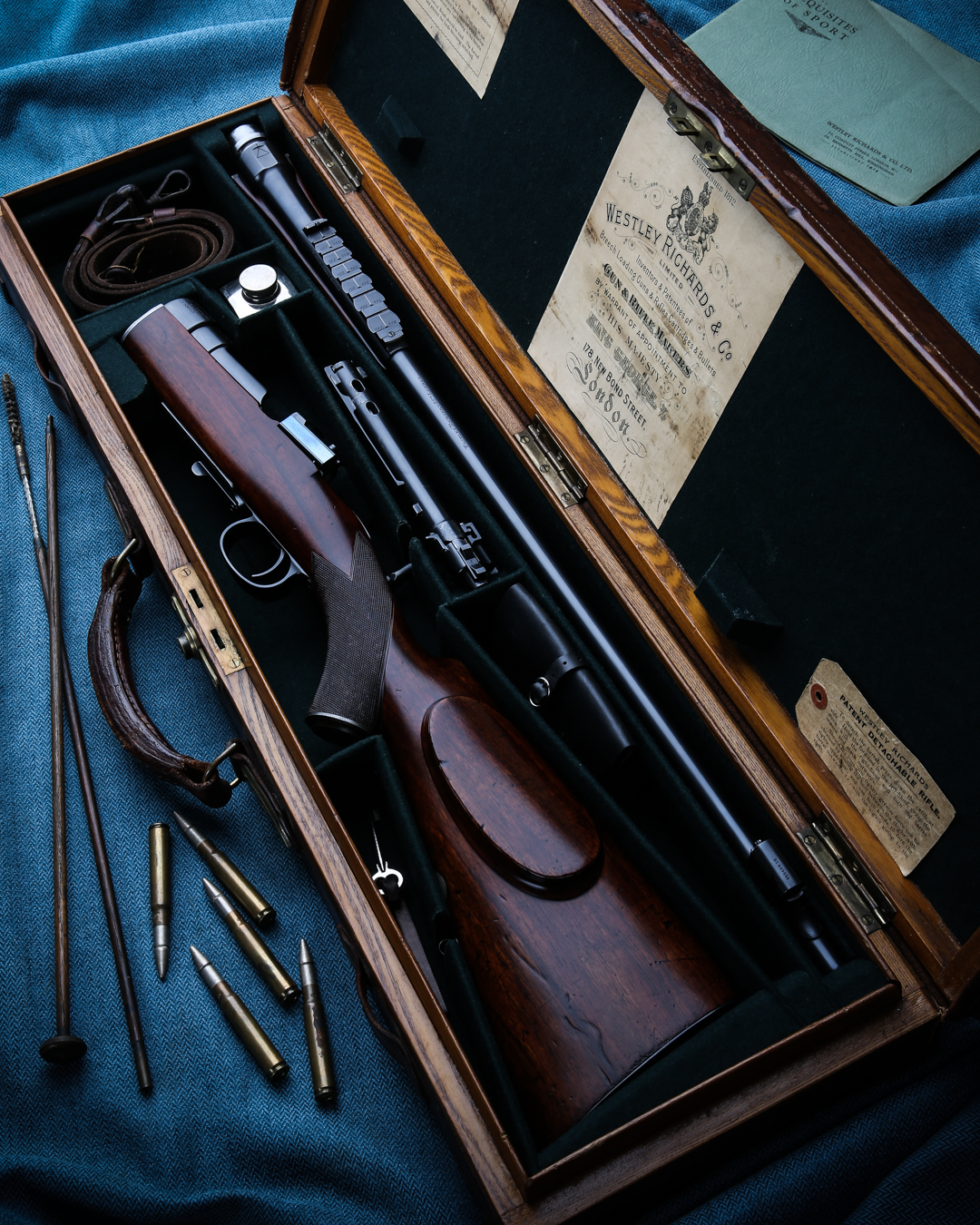 The second rifle is also Westley Richards & Co. .318 Accelerated Express, but this is a Best Quality Magazine Rifle with Patented Detachable Barrel. This rifle has been the firm’s flagship bolt action since 191. The rifle is sleek, elegant, and refined with an unmistakable profile and a lively, well balanced feel in the hands and it represents what makes British sporting rifles so revered. This rifle, #LT39953, was completed in 1916 and displays all the hallmark features of a Best Quality Westley Richards magazine rifle of the time. Made on a standard length Mauser action with wonderfully cut “house” engraving, WR combination foresight with folding sight hood and a WR pattern island rear sight with leaves regulated to 800 yards. The stock shape on this rifle is simply sublime and with almost all its original stock finish, near perfect original metal finish, and complete in its original oak and leather Maker’s best solid leather case with brass corners, this is a remarkable vintage rifle in every sense. 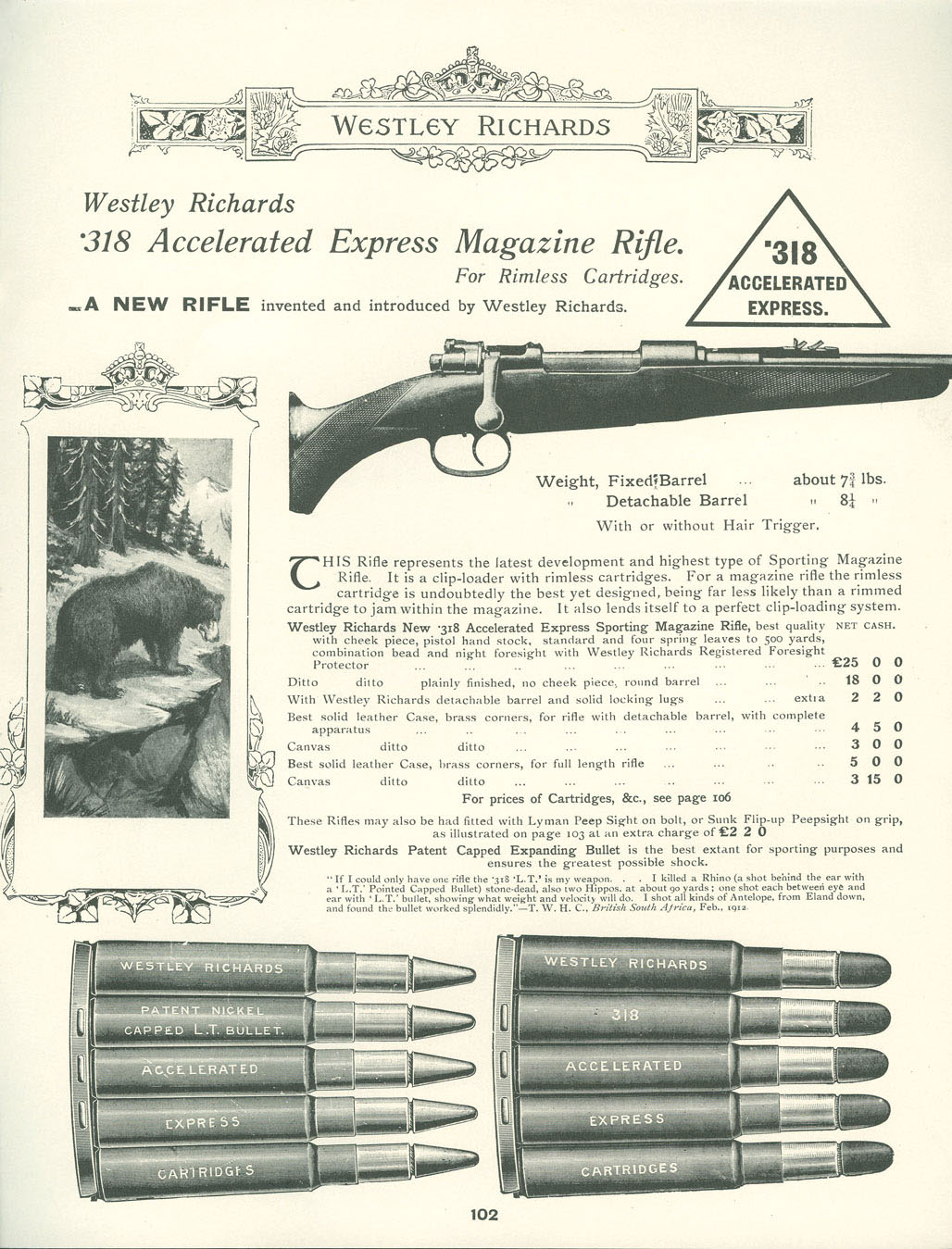 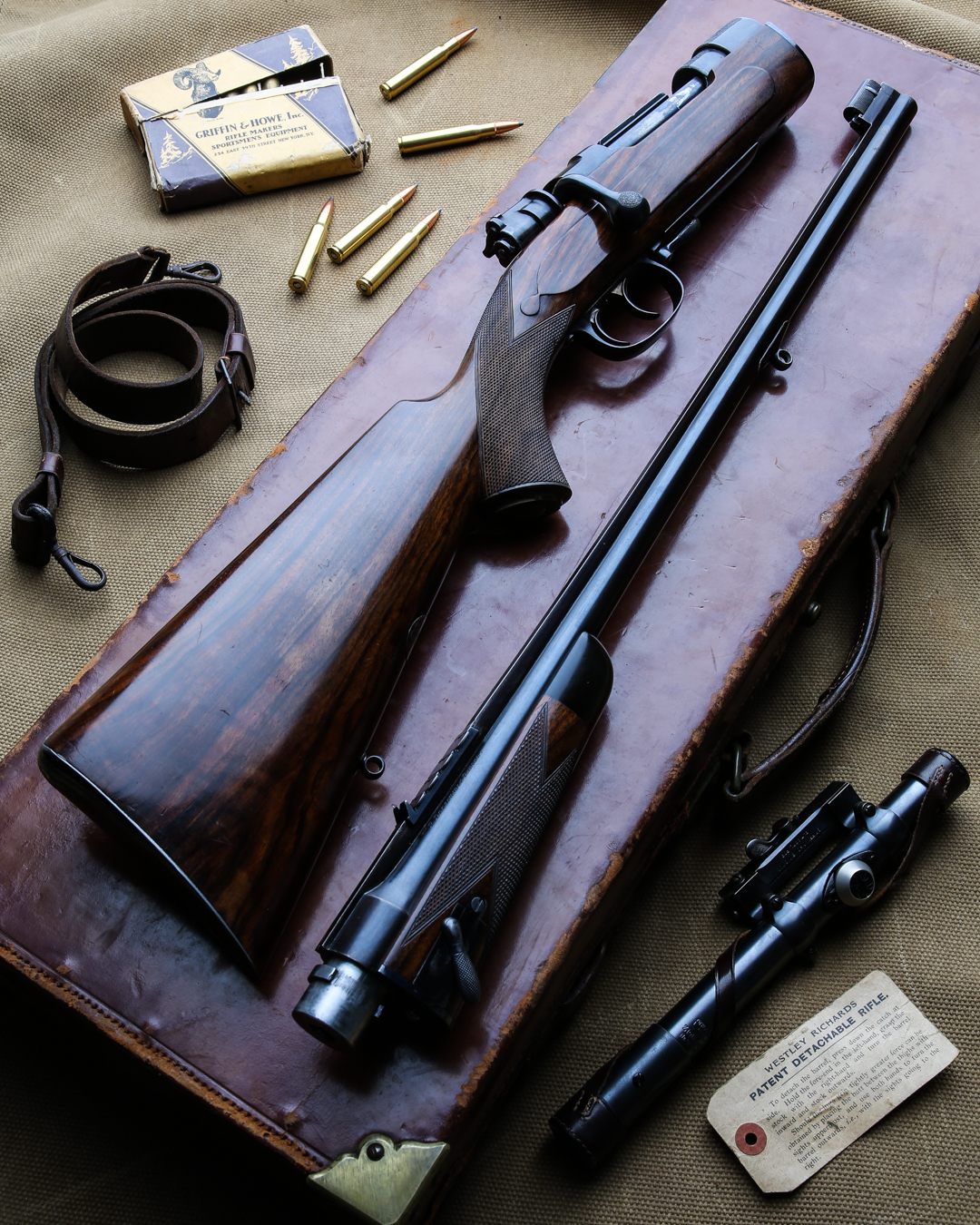 The third rifle is a Westley Richards & Co. .30/06 Springfield Best Quality Magazine Rifle also with the Patented Detachable Barrel. While the firm’s .318 Accelerated Express was the most common chambering for Westley Richards magazine rifles prior to WWII, there has always been an effort to appeal to the U.S. market and Westley Richards offered chamberings developed and popular in the U.S. such as .303 Savage or .405 Win 30 Gov’t ’06. However, Westley Richards bolt action rifles made before WWII and chambered for so called “American” cartridges are extremely rare; this is only the second one I have ever encountered. This one, #42064, was completed in 1929 as a Best Quality rifle with WR Detachable Barrel. Chambered in one of the greatest sporting rifle cartridges ever created, it is also built on a standard length Mauser action with a modified front ring and patented solid lug, “bayonet” take down system, a second “Hair” trigger, and a full length machine matted rib on the barrel that accommodates the WR rearward folding sight protector. In addition, the rifle is mounted with a “Patent Applied For” Griffin & Howe single lever quick detachable scope mount, the first version of this famous mount, introduced by G&H in 1929 the same year this rifle was made. 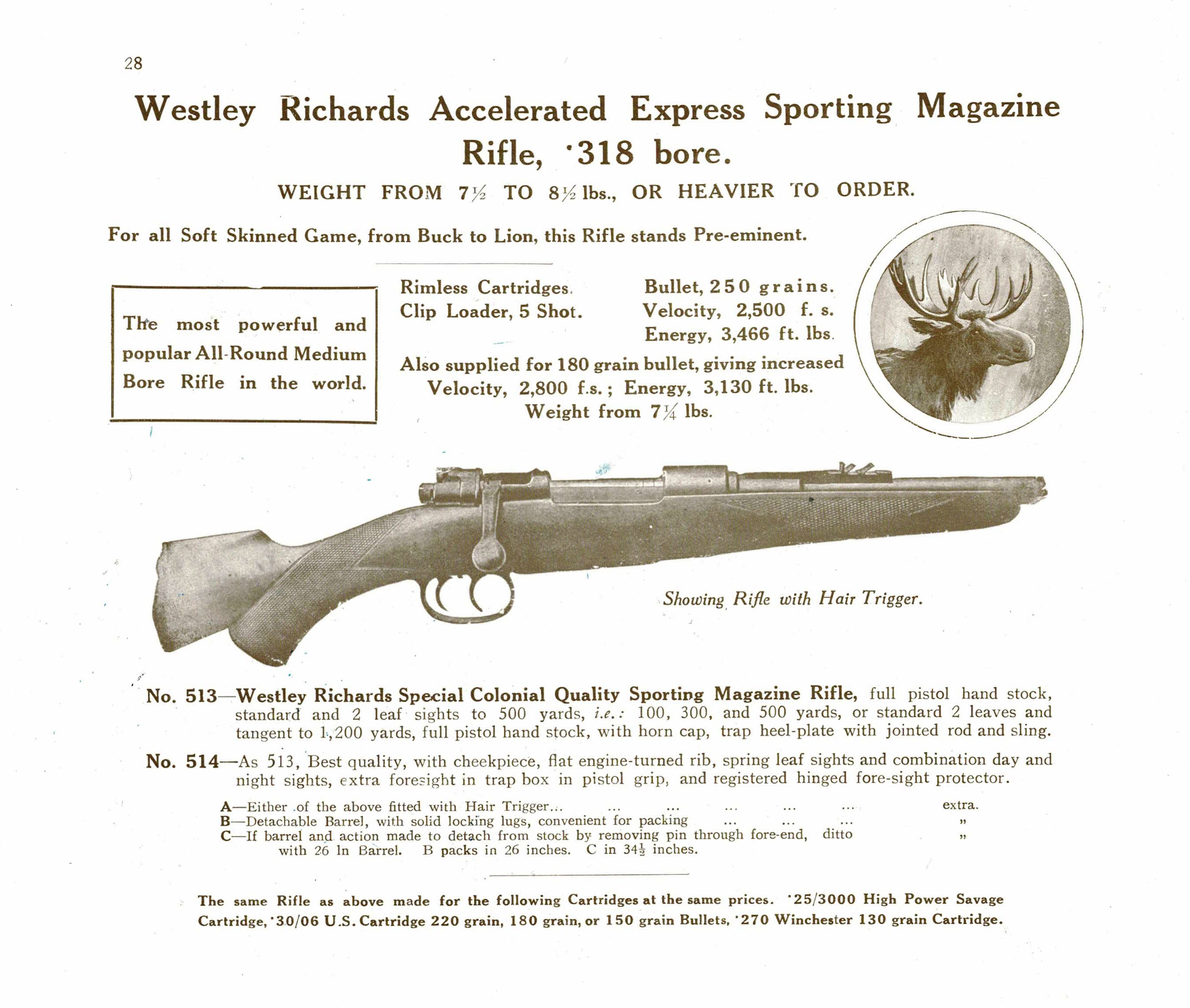 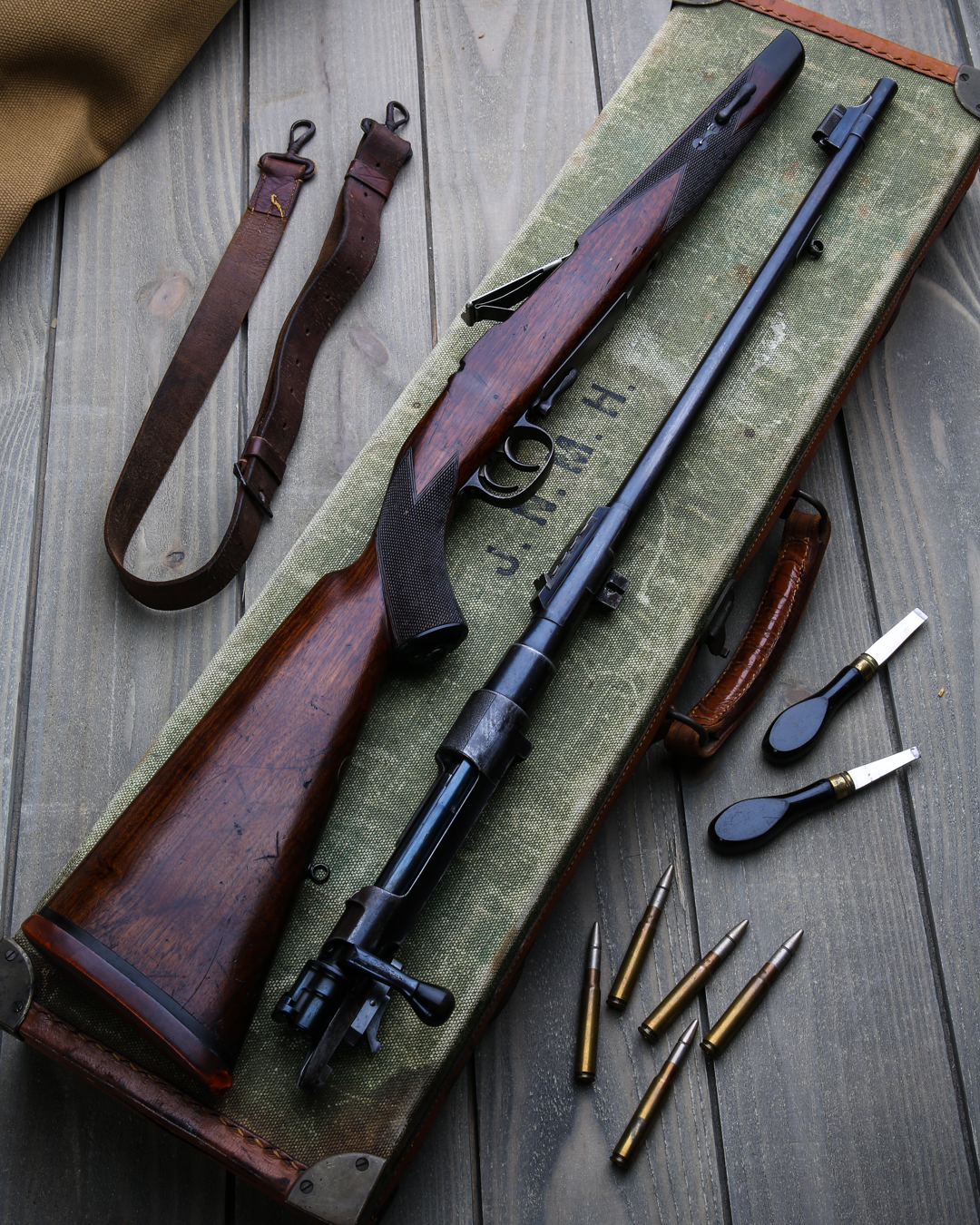 The fourth rifle is another Westley Richards & Co. .318 Accelerated Express “Light Model” Magazine Rifle but this one has Detachable Stock. Westley Richards offered two different methods of taking down a bolt action rifle to two parts for easier transport. One was the patented detachable barrel, where the barrel twist in and out of the action. The other was a detachable stock, in which the barrel/action easily lifted out of the stock with the loosening of a screw, and in the case of a WR, flipping a lever on the forend. Either option was available for the same price, an additional £2.10 in 1928, but the detachable stock was a lighter weight option to the detachable barrel rifle. The detachable stock option was a good match for the “Light Model” and it was an option often show together in company literature. That said, this remains an extremely rare configuration and to be included in the original Maker’s canvas case, rarer even still. The rifle, #LT42149, was completed in 1930 and fitted with a second “Hair” trigger and its original Anti-Recoil pad. 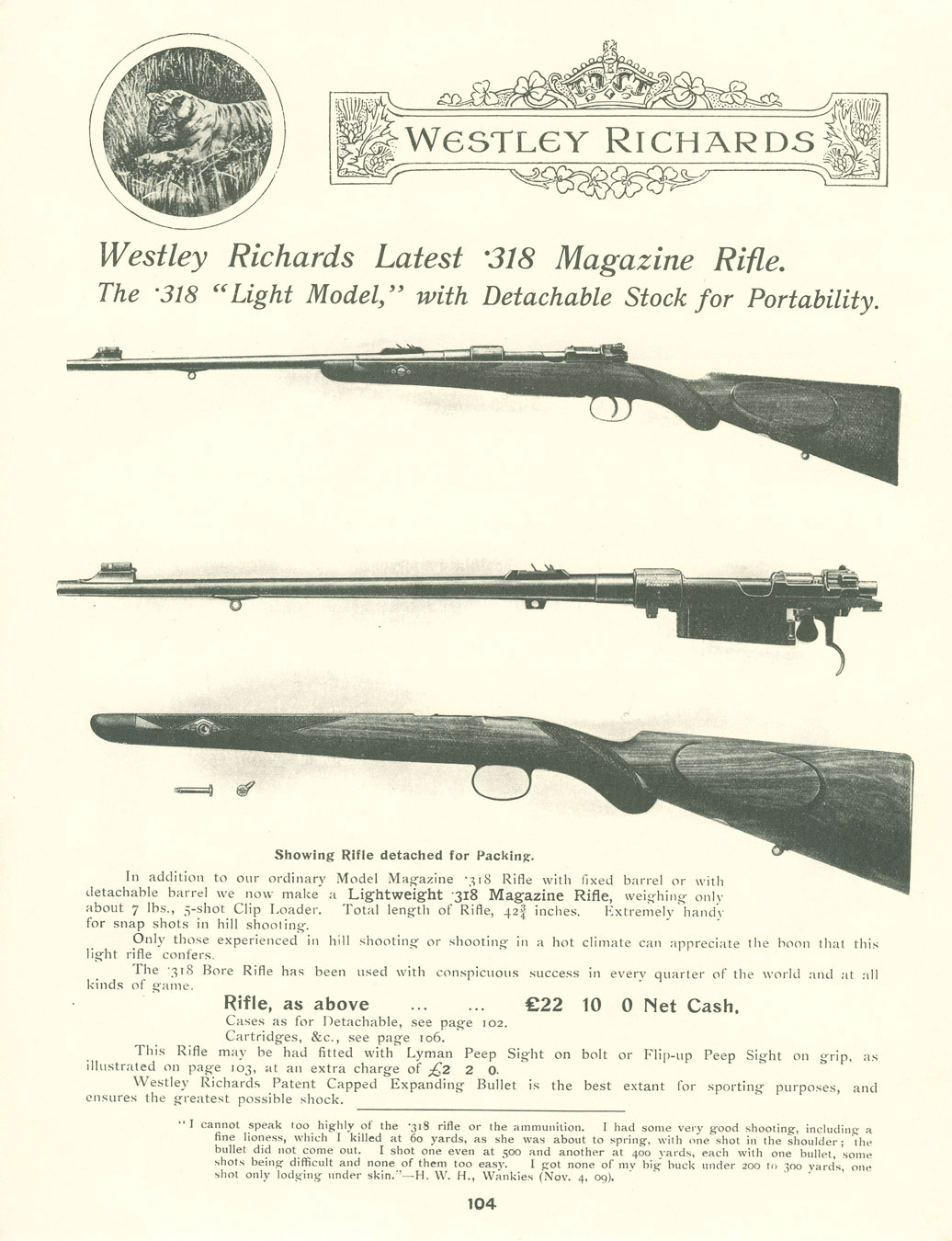 For more information on these 4 rifles, you can find them on our website at https://www.wrusedguns.com/view/all-listings/

If you would like to discuss any of these rifles, have similar rifles to sell, or simply want more info. on your own rifle, please contact L.D. McCaa at the Westley Richards U.S. Agency.