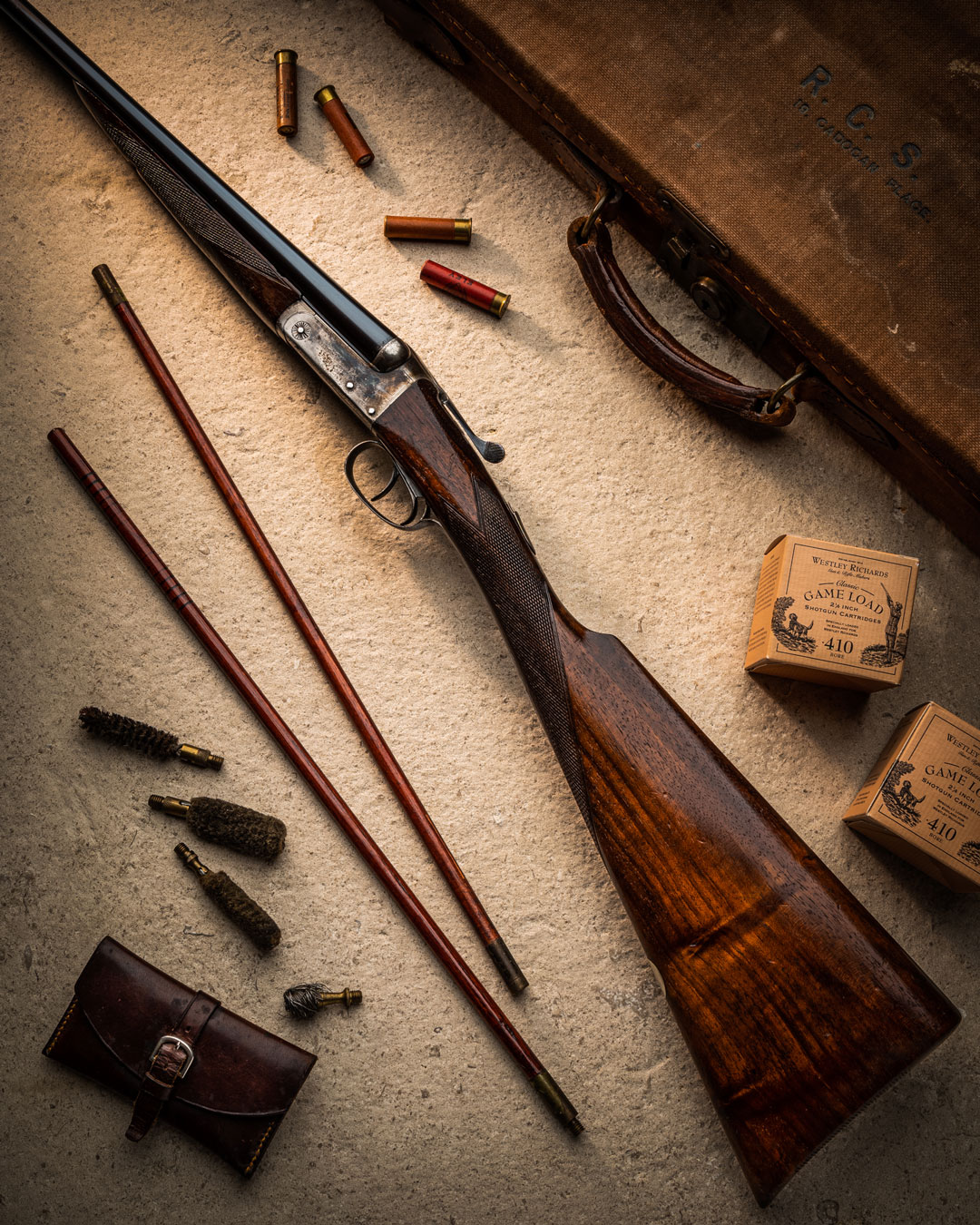 Prior to World War II, the demand for small bore shotguns, namely those in .410, did not exist like it does today. One reason was the perception that the .410, the smallest of the shotgun bores, was considered a cartridge best suited for a new shooter like a child or a smaller frame shooter such as a lady. However, despite its size, in the right hands the cartridge can be lethal on even the heartiest of small game such as wood pigeons or rabbits and hares.

“For occasional use about the place, and for Ladies. Carefully bored – even and deadly effect”

“We say that the .410 is an excellent little weapon for the beginner…yet even the old hand need not despise this little gun…it is a most useful addition to the gun room if only for the express purpose of keeping down the vermin in the close season.” 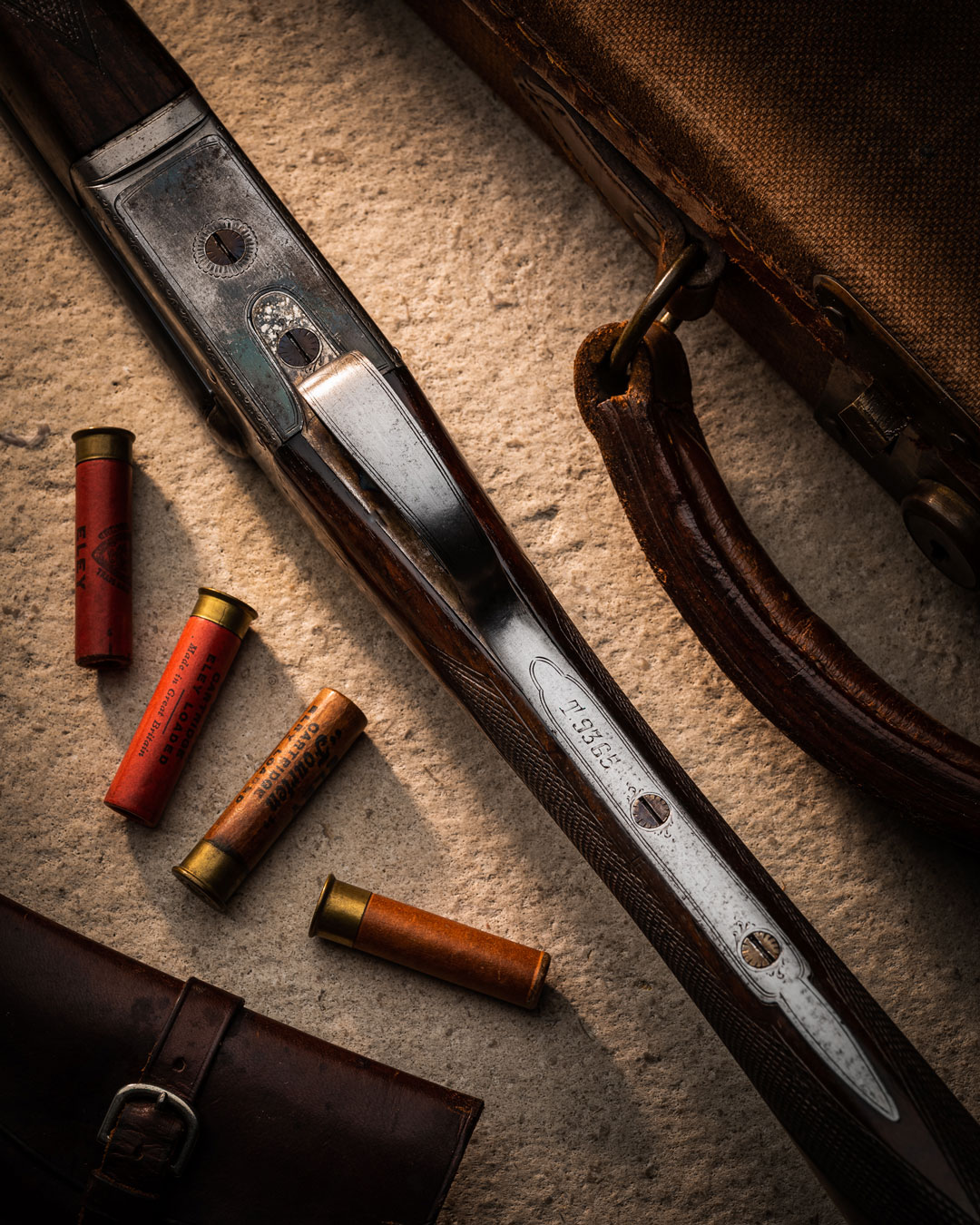 Another reason .410 bore double guns were made in relatively low numbers prior to the wars was due to the difficulty of designing and building a gun properly scaled to the little cartridge. I know how difficult it is, even with today’s technology, to come up with a scaled down design of an action.  I can only imagine how difficult this must have been 100 years ago. Couple the engineering difficulties with a lack of overall demand for such a gun, and it is obvious why the makers had no real incentive to put the time and effort in to doing so.

However, Westley Richards not only had a great design to work with in the A&D action, but much like today, the firm also had the willingness and ability to take on difficult projects for the right customer. One of those influential patrons was His Highness the Maharaja of Patiala. His Highness was a long time and very important customer to the English gunmakers, and particularly important to Westley Richards & Co. Having a voracious appetite for new, state of the art guns, rifles, and cartridges, he always had makers pushing the boundaries of what the makers could offer with his many orders. 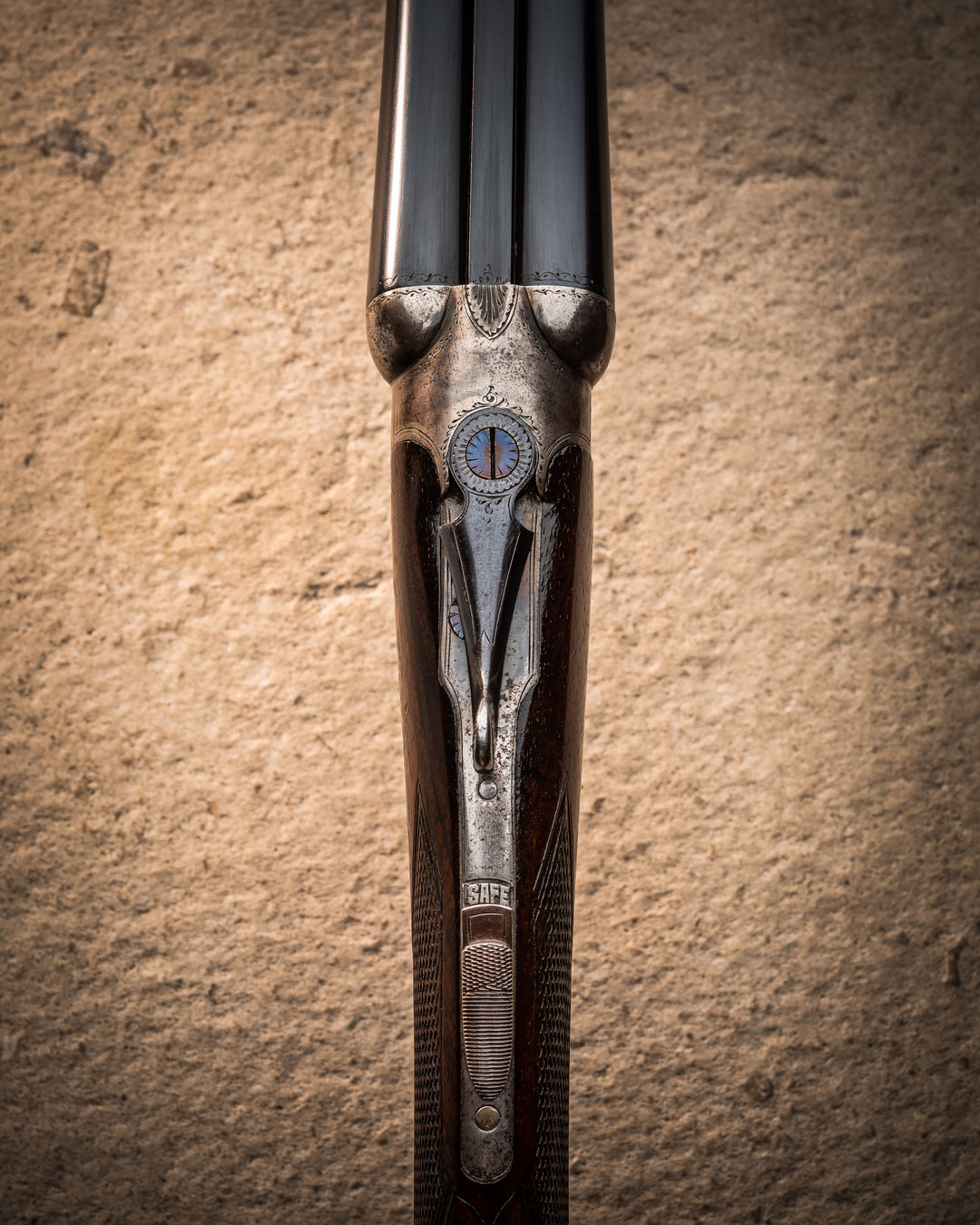 In October of 1924, His Highness placed a 30 gun order that included six .410 bore guns with hand detachable locks. While the firm had yet to offer a .410 based on the famous A&D action, it is obvious that the firm’s MD at the time, Leslie Taylor, felt the Maharaja qualified as the “right” kind of customer to do such a project for. No doubt the other 24 guns and rifles in the order also played a role in Mr. Taylor’s willingness to take this challenge on.

Perhaps taking the novelty of the .410 into account and knowing a best quality version would appeal to a very small niche, Mr. Taylor also offered the .410 in a plain finish hammerless double that could be offered at a much lower price point. At the time these plainer finish guns were called the “Federal” model and it was the least expensive gun the firm offered. It was built on a fixed lock, Anson & Deeley action with line border and name engraving only. Although it was not embellished with fancy engraving, it was made to order with the customer’s choice of gauge, barrel length and stock dimensions or the addition of ejectors. 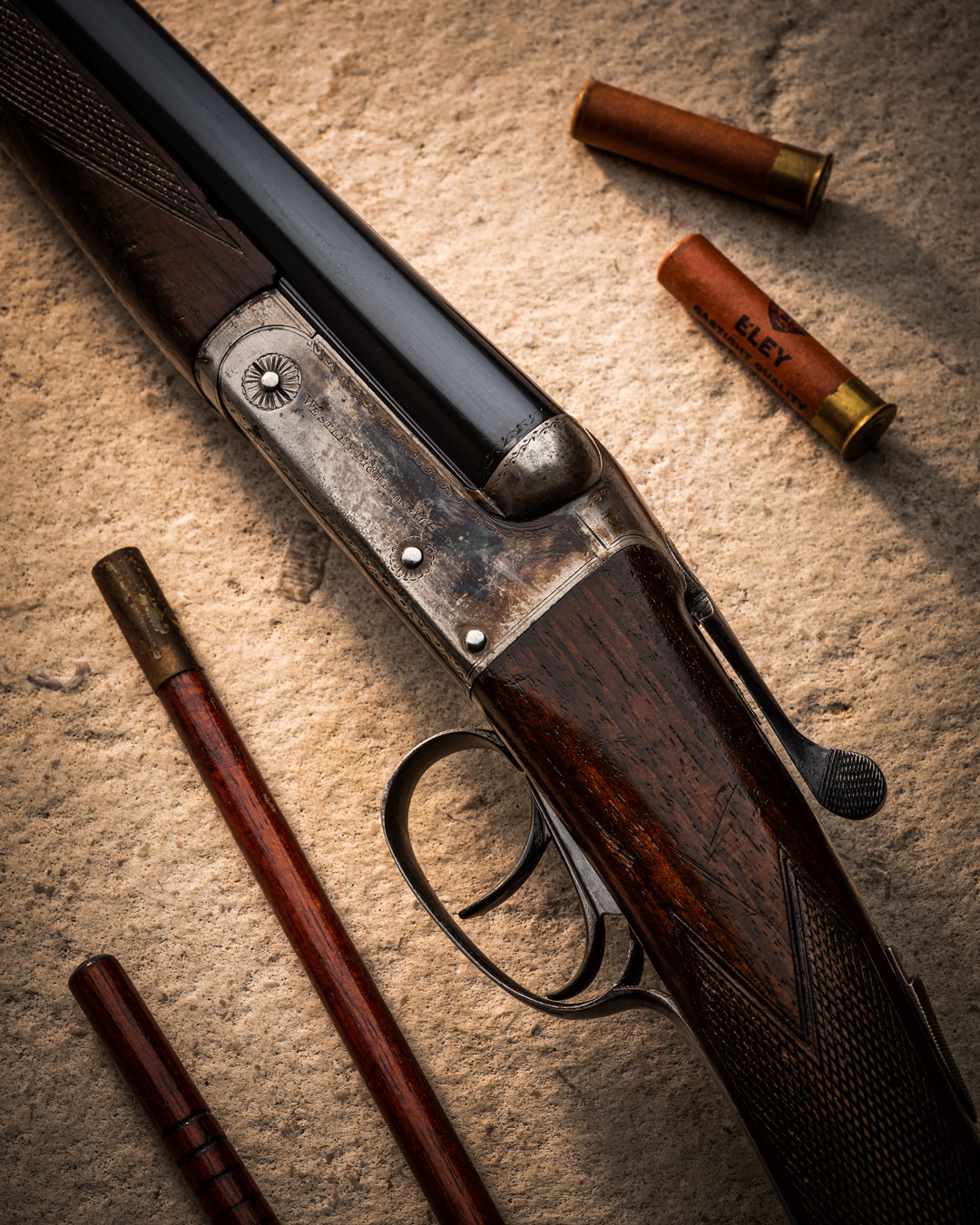 The catalog of that era said of the “Federal: “This gun, though priced at a low figure, is well designed and constructed and hand-made throughout.”

Fresh to market, one of these .410 bore Federal boxlock guns with ejectors has just come into the factory. This gun was delivered to R.W. Sharples in December of 1926 and has remained in the same family ever since. The gun is in its original, unaltered configuration with the initials “R.W.S.” on the stock oval and is complete with its original lightweight canvas case with the same initials on the lid.

Not surprisingly, .410 bore guns can have an inherently toy-like feel with often small, even child-sized stock dimensions and barrels lengths. But this .410 “Federal” is fitted with 28” barrels and its original 14 ½” length of pull over a checkered butt. By any measure this is a very rare gun, but to find a between-the-wars .410 ordered with adult size dimensions is even more of an anomaly, making the gun quite desirable as well.

While we are not quite sure how many of the fixed lock guns got built in .410 bore by Westley’s, this is the only one I have ever come across. A delightful little gun to handle, in a very rare configuration that remains in high original condition. 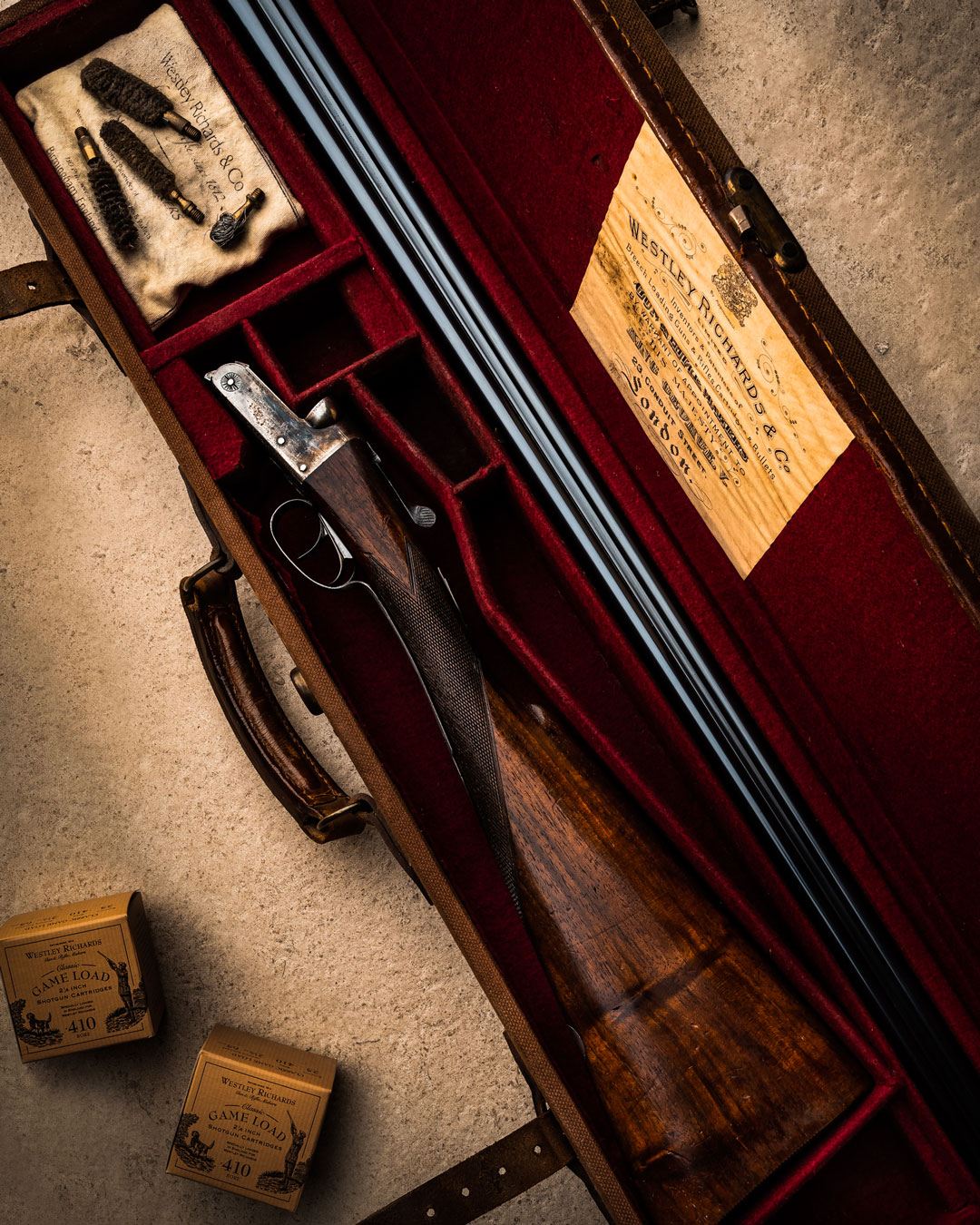