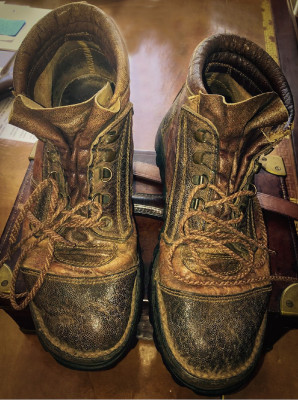 The Greatest Adventurer- The Runner Up.

My 1,000 mile Courteney elephant boots after 51 days of elephant stalking.

As a hunter, an indestructible spirit is essential to keep us returning to exotic and remote areas of the world. And sometimes we believe so much in our own longevity that we really don’t plan well for life-threatening events that frequently occur in these adventurous places . . . Hunting with Barrie Duckworth, P.H. and owner of Mokore Safaris, I just survived one of the best and most memorable elephant hunts possible. We were at Kazuma National Forest located in the extreme northwest corner of Zimbabwe, about a two hour drive by bushroad from Victoria Falls. After nine safaris to Africa and waiting several years to access this recognized big bull area, this trip was intended to be a memorable one. Not only was my son, Donald, accompanying me to Africa for the ﬁrst time, but our main target was to take a minimum sixty pound-plus bull – not an easy task these days. Being a very patient hunter, I had spent several years going through the agonizing and difﬁcult thought process that a true hunter requires when trying to decide to actually hunt the world’s largest and most dangerous land animal. For me, the peculiar set of ethical, economical and emotional decisions involved in elephant hunting not only took a long time, but called into question the very essence of the hunt, i.e. is it right to kill such a noble animal? So with heavy thoughts accompanying me and with stout heart (I thought) we found ourselves in the Kazuma Camp outside of Victoria Falls.

Armed with my .470 Nitro Express, my Courteney boots, and my Westley Richards leather cartridge belt, we were ready to hunt elephants. Everything went well for the ﬁrst day – seeing and stalking lots of large bulls, enjoying my son Donald’s delight at seeing Africa game for the ﬁrst time, and renewing acquaintances with several locals who I had met the previous years. By the second day I noticed I wasn’t able to walk more than few hundred yards without some shortness of breath and chest pain. At 64 years, I pride myself on being in reasonably good shape and since I always hunt hard in Africa, I make sure I increase my workouts prior to the trip. By the fourth day, and now in some distress, I decided to visit the tiny Victoria Falls clinic for a checkup. After an ECG and blood pressure checks, all is declared normal and the local doctor suggests a severe case of indigestion, and sends me back on the 90 kilometer journey through the bush to camp. Mid-afternoon of the following day, hunting in the famous Panda Masai block, we see three large bulls at a distance. Reluctantly, since by this time I was unable to walk without distress, we decided to stalk. After a one mile walk we were able to see the way – all three bulls were above 50 pounds and one was well over 60. Finally, after several years, “my elephant”! A heart pounding ﬁnal stalk, but at last moment, all the bulls decided to depart. Again, a decision to continue following is made with a certain understanding that physically I am in deep trouble. Another mile or so of excruciating pain and we ﬁnd ourselves again in the ﬁnal stalk of the largest bull. Finally, a ﬁrst barrel to the heart at 65 yards and a quick second barrel as the bull turns to run. A fast and furious 250 yard run and after two more left and rights, the bull ﬁnally collapses in a cloud of broken trees and dust. Simultaneously, I collapse and cannot move. I am at the ﬁnal stage of a four-day heart attack! Brieﬂy I recover enough to appreciate the majesty of this magniﬁcent animal and reﬂect on the abject stupidity of my continuing a hunt that should have ended several days earlier. A 90 kilometer evacuation through the bush to the Victoria Falls airstrip precedes a lapse into full cardiac arrest just as the Air Rescue plane taxis to a stop. Aboard is (wonder of wonders!) a cardiac deﬁbrillator machine that miraculously brings me back to life. A two hour plane ride to Johannesburg, heart surgery, and I’m home in two weeks. I am reminded of the great line in the very bad movie “White Hunter, Black Heart”, when famous director John Huston, told that killing an elephant was a crime, responded, “No, it’s far worse than that, it is a sin.” So, sometimes life is not all what it seems to be. As I reﬂect on this experience, now seven months past, I realize it simply was not my time to go. But I can’t help but appreciate the poetic irony of both my magniﬁcent 65 pound bull and myself dying at the same precise moment. Can you imagine the great stories that he is telling his friends in Elephant Heaven about the day he almost got even?