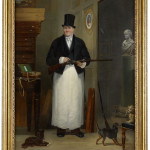 In the year 1815 Wm, Westley Richards opened an establishment in London at 170 New Bond Street. He chose a most fashionable quarter, and a street made famous as the resort of that luxurious class to which his products appealed. 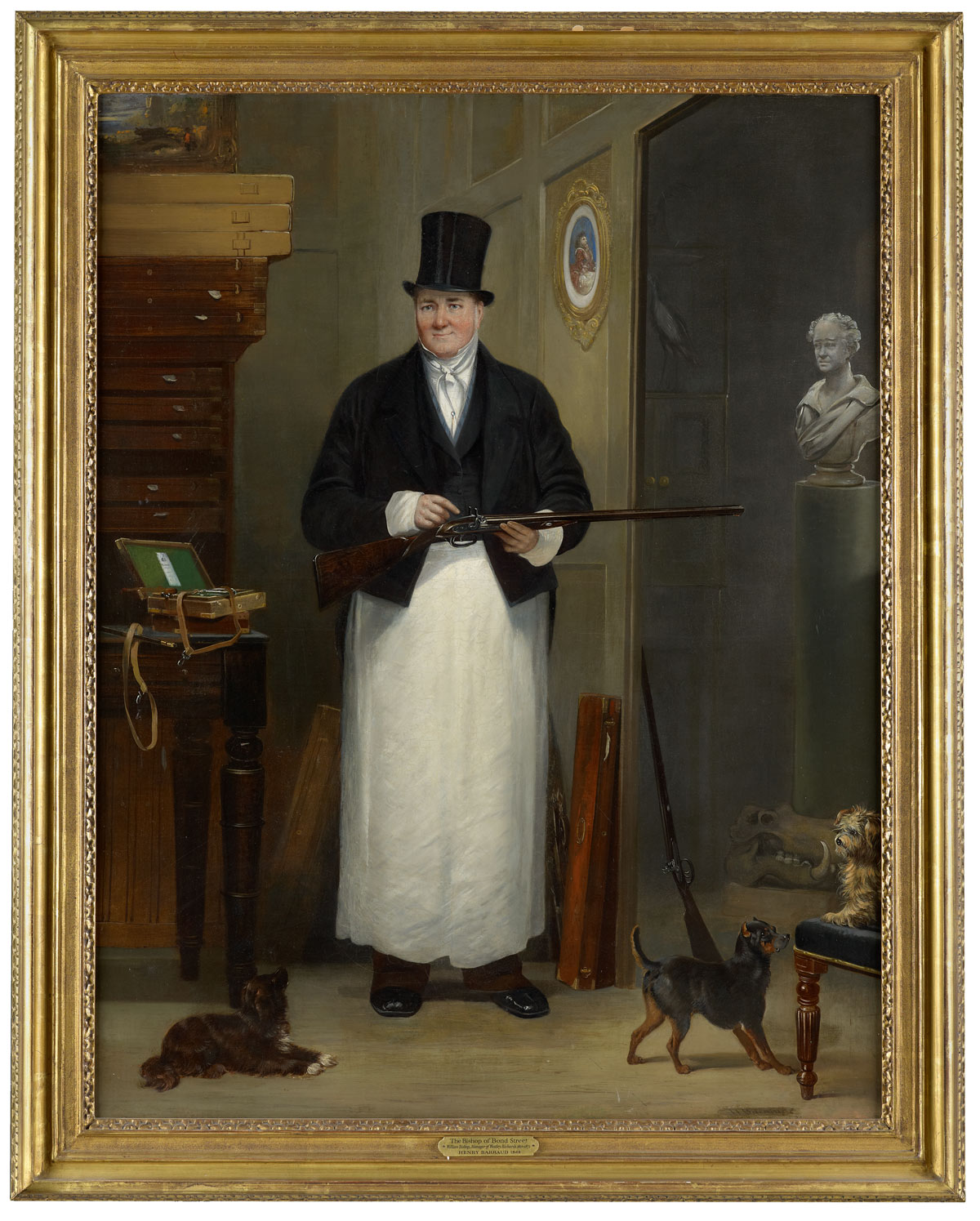 Not far off, on the opposite side, was Long's Hotel, where Byron and Sir Walter Scott dined in this same year.

The 'Bond Street Lounger' was already quite a well known variety; and it was the 'modern ease and fashion' to adopt the 'Bond Street roll' with a tooth-pick between the teeth, and so lazily lounge along if one claimed to be a true devotee of the cult. The fashion has changed, the type still remains. The street's influence is as magic as ever; fashion congregates there as of yore; and, with not a few, to go shopping in Bond Street is an event worth living for.

For this new establishment Wm. Westley Richards was fortunate to fall in with William Bishop, a Londoner, who became his agent, and was installed in the lofty narrow building then numbered 170, but now 178, which presents to-day, except for the shop-window front, its original aspect. ( 178 is currently occupied by the jewellers, Boodles and sits adjacent to Cartier on New Bond Street)

Bishop porved a good friend and staunch supporter; and his service to his chief is well summed up in the current phrase of the time, to wit. 'The factotum of Westley Richards.' He was regarded as a 'character', a term vulgarly applied to akan of distinctive personality. His pronounced profile and mobile features would have adorned the histrionic profession, the priesthood, or the Bench; obviously this was akan 'detined to utter much speech'. No wonder he was reputed to be an excellent salesman, for he brought to the role natural good humour, patience, ready wit, and persuasive eloquence.

Mr. G. T. Teasdale-Buckell, who knew Bishop, in his book, Experts on Guns and Shooting, published in 1900, writes:-

'It is unquestionable that Westley Richards' guns owe much of their success to the personal skill and management of Westley Richards' famous lieutenant, Wm. Bishop; under whose regime the house in Bond Street became quite an Institution….The Bishop of Bond Street! What does that convey to the generation of modern shooters? but to us of an earlier date what memories does it not awaken? Memories of times and of faces; of times long since passed away and of faces, now alas! gone from our gaze. Personally, we own to having some of the happiest recollections of our life associated with "Uncle Bishop".' 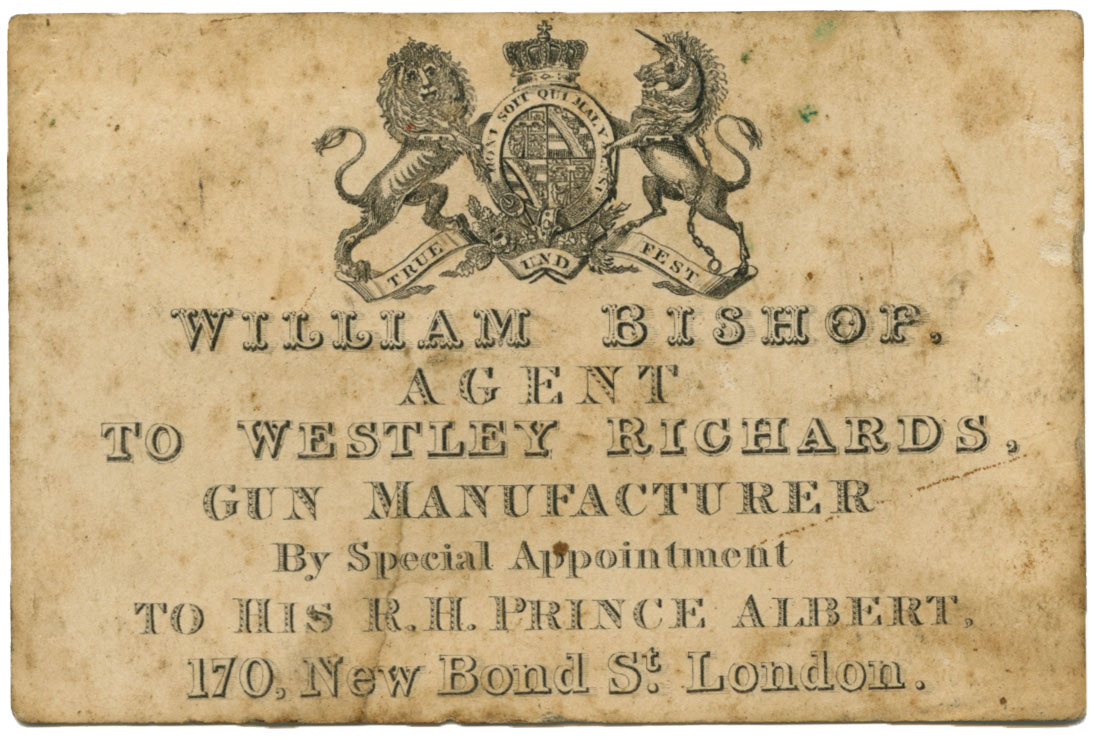 Encountering in the daily round members of the world of fashion and sport he was not long in becoming on intimate terms with many of them. The young bloods, officers, fashionable country squires, in their idle moments, could always find a cure for ennui at the Bond Street rendezvous. It was a delight to battle wit with the Bishop, and a delight which even a foul, foggy day could not obscure. Occasionally, and by due arrangement, in proper fulfilment of their sporting dictates, he would spice his social attractiveness by organising a rat hunt, a cock fight, a bout with the gloves or the 'raw 'uns', an hour's practise with the duelling pistol or some other gentlemanly recreation in vogue. Doubtless the consciences of his guests at these sporting orgies required no salve; but assuredly if they did, the broad-brimmed topper, the black swallow-tailed coat, the white apron, and the shirt sleeves turned over the forearm like the lawn of a high church dignitary, might have been invoked to prove more than a lay sanction for their barbarous pastime.

Such qualities soon get gossiped into notoriety, and induce that attitude of familiar reference with which most people delight to discuss their heroes. William Bishop became one of the best known figures in the West End of London, and his fame was spread far and wide under the popular title of 'The Bishop of Bond Street'.

The average cab-driver of the day accepted this term as a clear sufficient direction of his fare's destination. A distinguished visitor was once driven by an old hand to 170 Bond Street. 'What's this, cabby?' cried the astounded fare; 'I told you the Bishop of London!' 'Well! can't yer see him inside?' demanded the perplexed Jehu, while he flicked away in indignation at the aspersion upon his knowledge of topography and celebrity.

Of all friends and companions, none had Bishop's affection more unreservedly, than his dogs. He cared for his particular favourite, 'Tiny', as if she were a being of his own mould. When she died, at the age of fifteen, on 25 August, 1844, he had a tomb formed for her within the outer wall of the area of 170 Bond Street, special obsequies were rendered, and the tomb presently sealed by a marble slab. The dimensions of this slab are 3ft. 2in. by 2ft. 4in. ; and the following inscription, written to Bishop's request by a friend, is carved upon it. 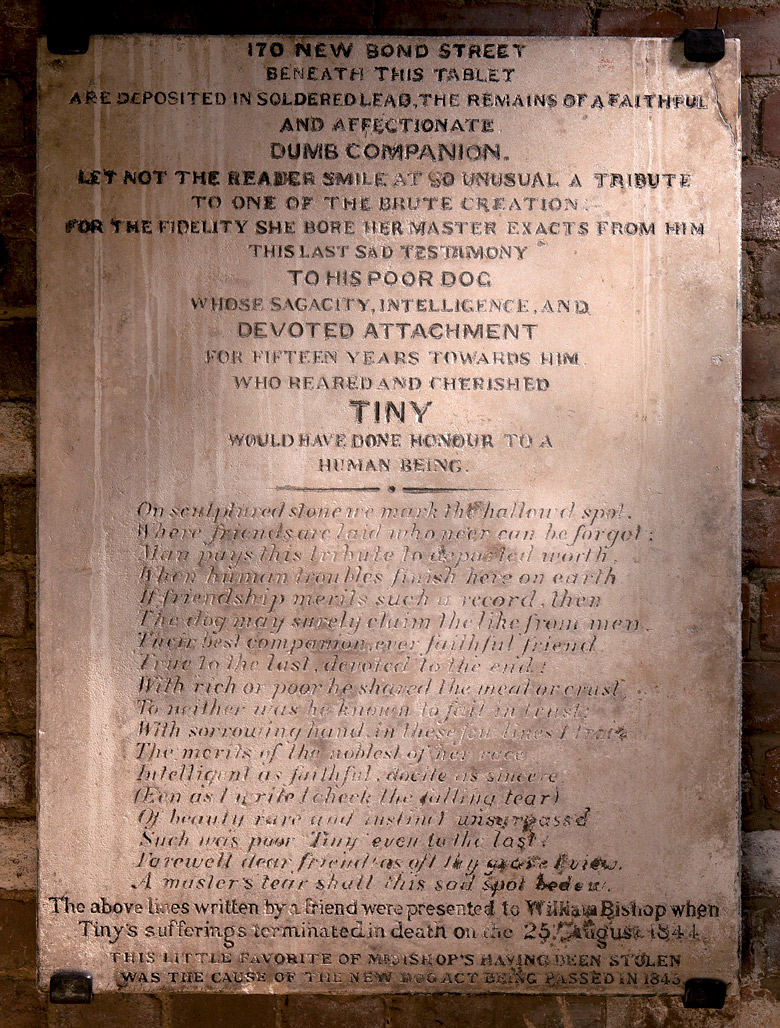 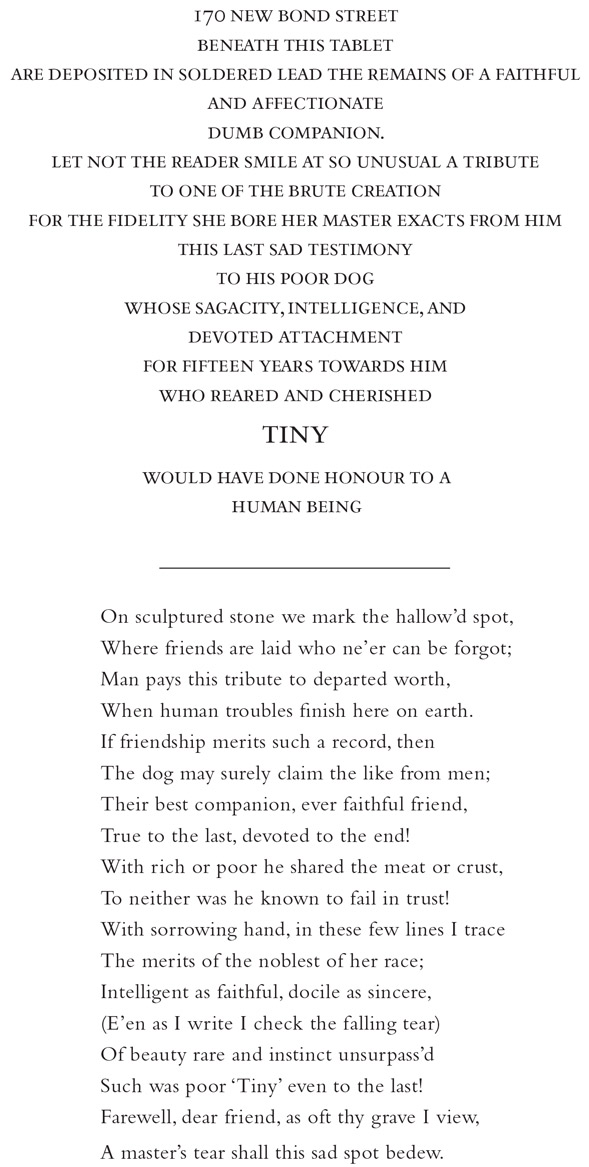 Some time before, 'Tiny' had been stolen, and the loss (it gives us a sincere pleasure that it was but temporary one) moved Bishop to take action in a matter which had grown into a veritable scandal. Dog-stealing, not altogether unknown in later times, was painfully rife in those days; its nefarious votaries finding their profit in 'Rewards' for returning the lost pet, or in selling either the animal or the skin of his murdered body. Owners were powerless, for the law provided no satisfactory redress. It is stated that Bishop spent the full sum of £1,000 - a big outlay for any person of the middle class at that period - in his determination to make the practice of dog-stealing an offence punishable by summary jurisdiction. His persistence crystallized in an Act of Parliament, introduced in the year 1845 by Mr. Liddell, Mr. Fitzroy Kelly, and Major Beresford. In due course, as dog-lovers gladly acknowledged, its stringent provisions provided a curb for the crime.

A copy of the Bill in our possession has stamped upon its cover, 'THE BISHOP'S ACT'. It was probably presented to Bishop either by its Parliamentary sponsors or by some other public man who had taken a keen interest in its origin and fortunes. A sort of prefatory note within, which is called an 'Address', is as follows:

'It is fit should be known that the adoption of the Act, which interposes, by its penal provisions, so material a check on the growing evil of dog stealing, owes its existence to the unceasing efforts of Mr. Bishop, the Gunsmith, of New Bond Street. His intercourse with persons of the highest distinction, who had been the victims of professed dog stealers, enabled him to obtain their aid in the Legislature to carry a measure, the absolute necessity of which had become apparent to all who valued a useful and faithful companion. To him, as well as to those gentlemen who co-operated with him in the attainment of so desirable an end, every grateful feeling is due.'

To commemorate his efforts, and the passage of his Dog Stealing Bill through Parliament, Bishop's admirers and supporters presented him with his own portrait in oils. he chose to be painted in a circumstance of his daily calling. He stands aproned and hatted, his best Episcopalian look eloquent upon him, with a gun in his hand, whose points of merit he is evidently in the act of recounting. 'Tiny' and two other canine pets who wonderment; a bust of Colonel Peter Hawker is at the end of the perspective. The portrait was reproduced in a London journal at the time of Bishop's death. it bears the title at the foot, 'The Far-famed Bishop of Bond Street.'

Another photograph, which we reproduce here, does violence to a well-founded tradition that the Bishop was not to be seen without his hat upon his head. Here it would seem it is raised in ceremonious salute to some distinguished patron. 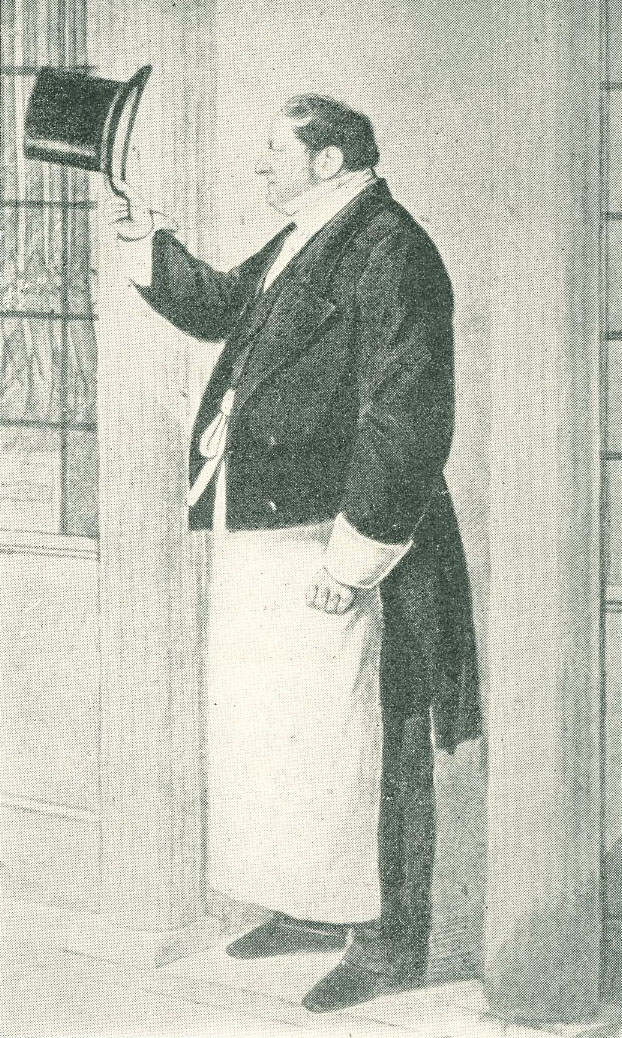 The Bishop died in the year 1871, after more than fifty years' service in the Bond Street establishment. He seems to have been regarded by the generation which knew him with an esteem scarce less than affection.

Indeed, he was looked up to by men of superior station to himself. To some of them he acted as a mentor in the noble art; - Borrow might have envied his enthusiasm in the cause, and would certainly have claimed his brotherhood; - a kindly counsellor to others on matters outside the traffic of his duties; to all a friend; for he possessed a talisman in his character, that spark of Falstaffian humour, which could not fail to keep him bright in the memories of all who met him. 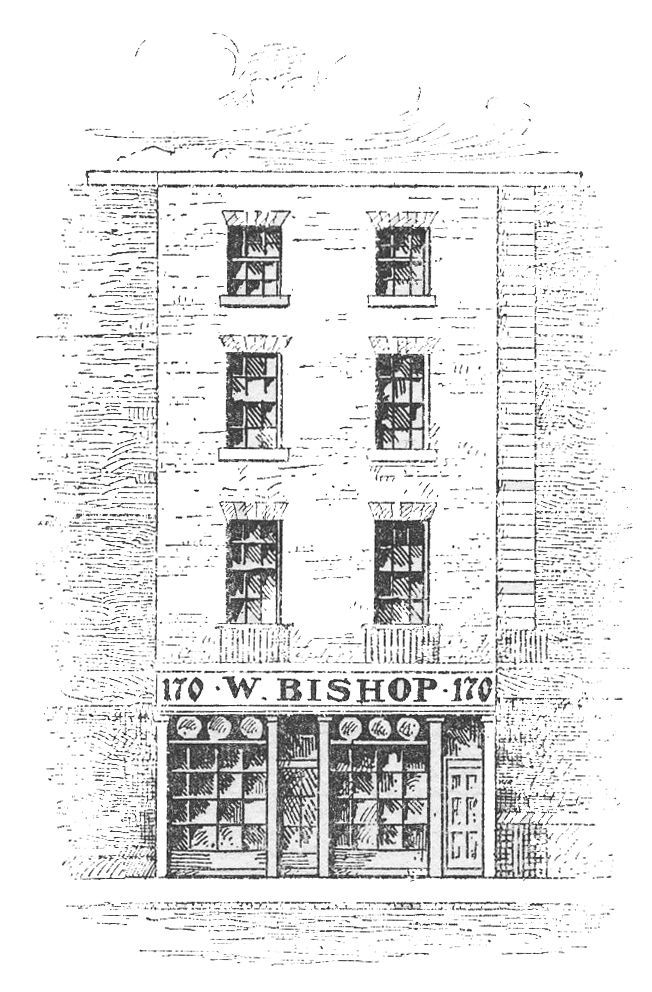 This article is Extracted from The Westley Richards Firm. 1812 -1912 by Leslie Taylor.

The original copy of the oil painting described and shown above, hangs proudly (for Westley Richards)  in the Holland & Holland gunroom in Bruton Street.