Westley Richards is a name synonymous with rifles; double, magazine and single shot. Over the years the reputation of the company has been founded on large calibre rifles that have proved effective on all the worlds big game. The list of big game calibres built by the company reads like a who's who of the very best the British gun and rifle makers could produce, ever since the introduction in 1898 of the first .450 3 1/4" nitro express metallic cartridge.

With such a reputation for large calibre rifles it is a genuine pleasure to get to build the first and probably only .22-250 Remington calibre take down magazine rifle in the history of the company. This fine little calibre can trace its ancestry back to the 1930's and the boom in wildcatting that our good friends in the USA were running with. In essence the .22-250 is the .250 Savage case necked down to take the .224 bullet. It was officially adopted by Remington in 1965 and has been chambered in production rifles by most of the major rifle manufacturers ever since.

Principally a varmint (sorry 'vermin' for us Brits!) calibre it is also a devasting Roe deer calibre north of the border here in Britain. Unusually and much to our gratification, this rifle is intended for use here in the Uk which makes this an extra special build for the factory as most of the guns and rifles we build head overseas. 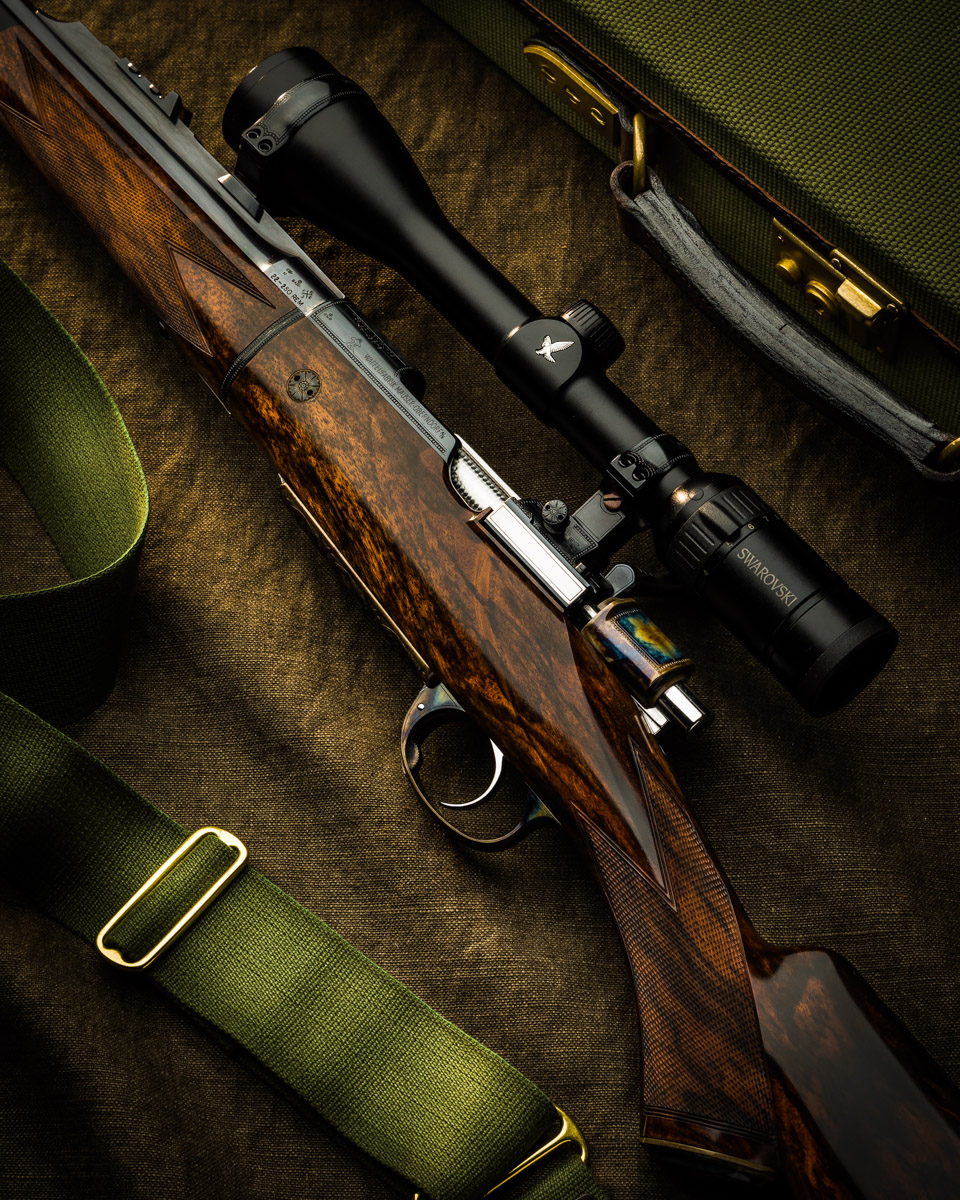 A Swarovski 1" Z3 scope in old school claw mounts sits well on the rifle making use of the original rear square bridge.

When building a rifle of this scale in British terms the key to the build is in the action. You need something small and being a British riflemaker that traditionally has to be a Mauser '98. Now modern small 'Kurz' (short) actions are available, but with a project this unique you really need to look for something special. So it was that we pulled from the depths of the factory an original Mauser Oberndorf Kurz action with a rear single square bridge still retaining its original factory fittings for a quick detachable scope system.

Taking things a step further it was decided to build the rifle as a takedown, the smallest of which we have built. This in itself was an interesting excercise as we opted to review the takedown release catch traditionally found on the right side of the forend, to use a revised underside catch fashioned in the shape of our famous Deeley forend catch so giving the rifle that classic Westley Richards touch. 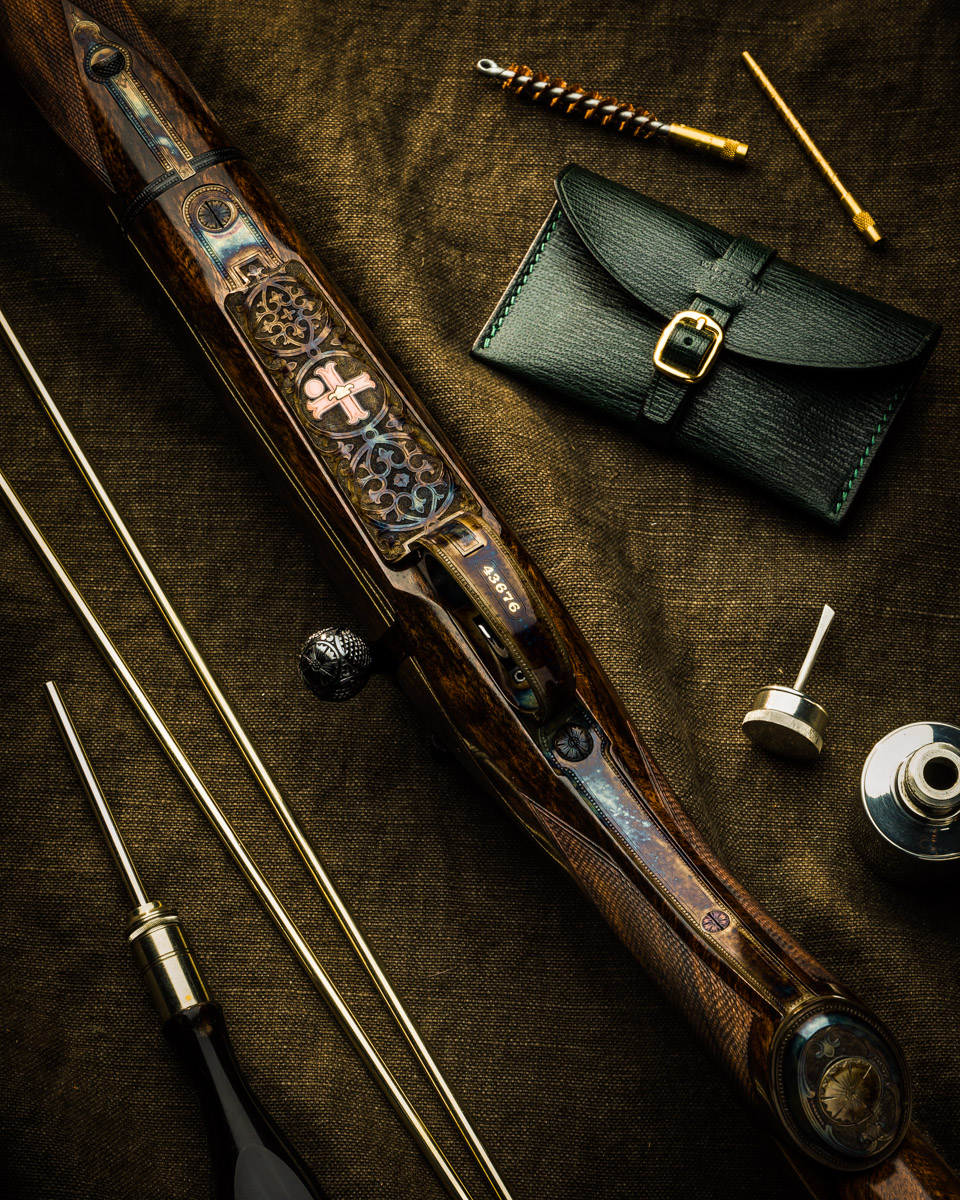 Engraving wise the client requested a design based around 'Byzantine' motifs. The Byzantium period in history is said to span over 1000 years so clearly there was a lot to chose from so with the aid of the client, a geometric border (found commonly on gold jewellery of the period), combined with a floral motif was used as the basis for the engraving with the family crest set in the centre of the floorplate surrounded by a design that was taken from an architectural feature. To cap it all of the clients initials for both the stock and case disk were engraved from the Uncial alphabet! 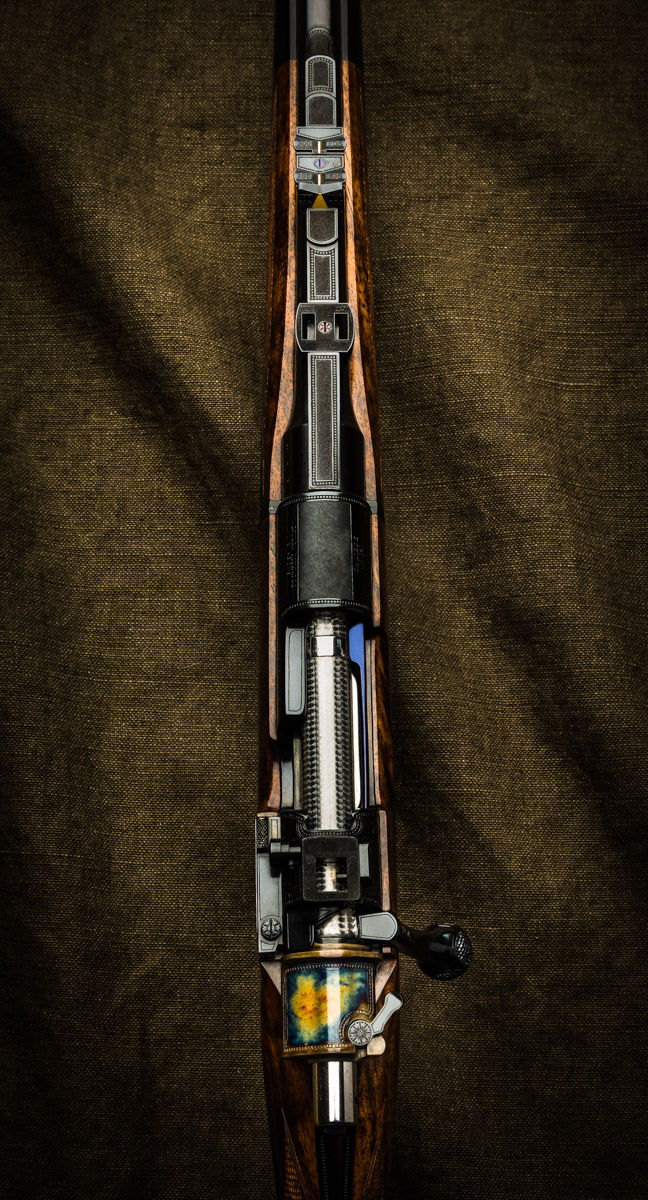 Looking down on the rifle the elegant lines are enhanced by the rich black, electric blue and vivid case colours of the final finish.

In its finished state with the addition of a case colour hardened floorplate and magazine box the rifle is a wonderful mixture of the old and the new. The original Mauser '98 Kurz action was without doubt the right way to go with such a project and we trust that complete in its traditional lightweight canvas case this unique little rifle will give its owner decades of fun and pleasure. 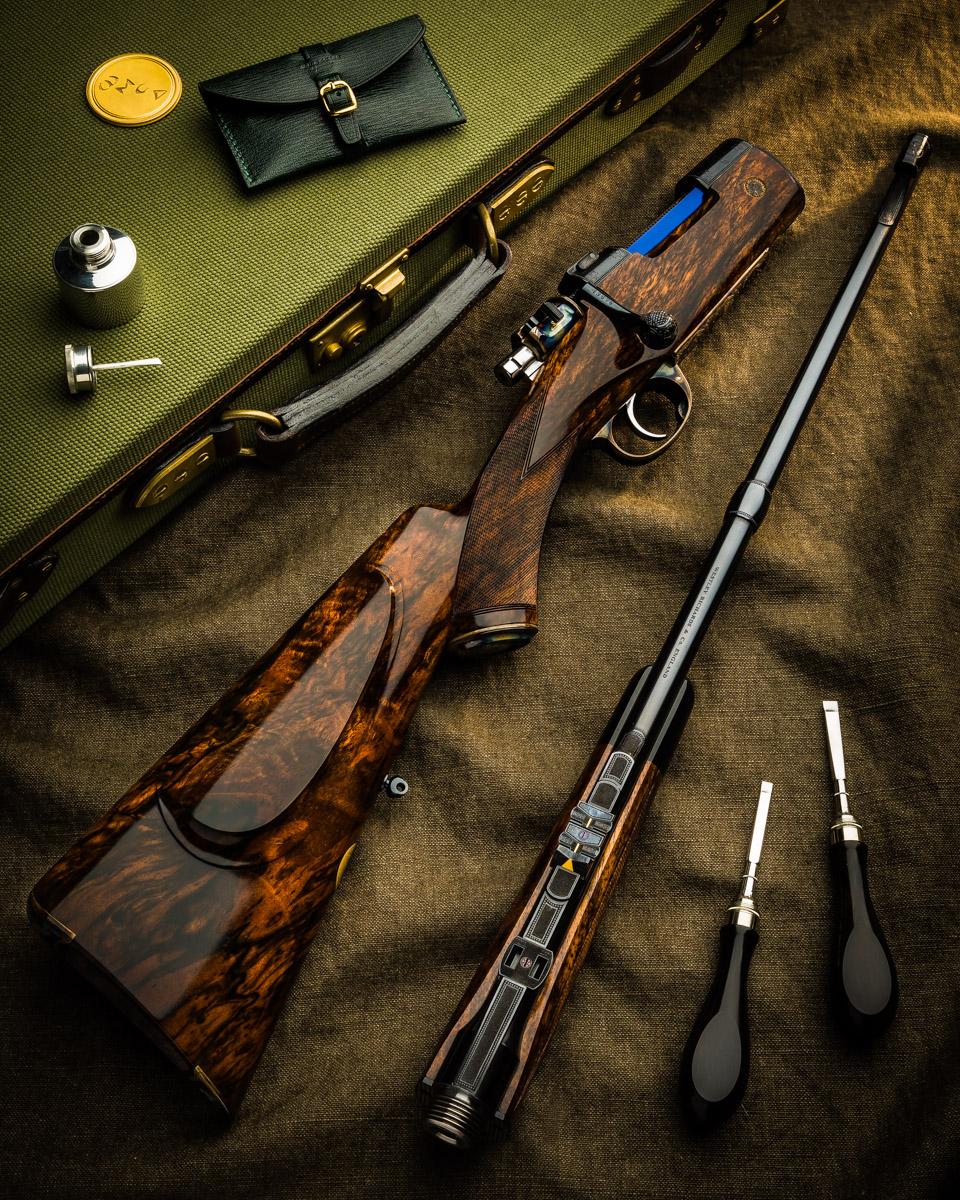 A close figured exhibition grade piece of walnut furnished with heel and toe plates sets the rifle off.