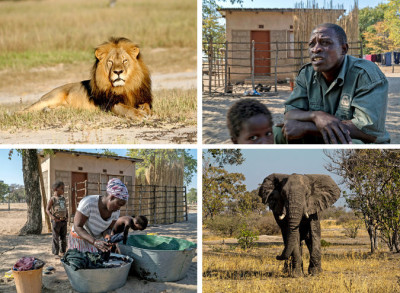 Clockwise from top left, Cecil, a lion whose death at the hands of a hunter in Zimbabwe sparked calls for curbs on trophy hunting across Africa; William Moalosi, a farmer and former hunting guide in Sankuyo, Botswana; an elephant in Botswana; and Othusitse Ndozi in Sankuyo, a village that used to get a steady income from hunting. Credit Top left, Andy Loveridge/Wildlife Conservation Research Unit, via Associated Press; photographs by Joao Silva/The New York Times

SANKUYO, Botswana — Lions have been coming out of the surrounding bush, prowling around homes and a small health clinic, to snatch goats and donkeys from the heart of this village on the edge of one of Africa’s great inland deltas. Elephants, too, are becoming frequent, unwelcome visitors, gobbling up the beans, maize and watermelons that took farmers months to grow.

Since Botswana banned trophy hunting two years ago, remote communities like Sankuyo have been at the mercy of growing numbers of wild animals that are hurting livelihoods and driving terrified villagers into their homes at dusk.

The hunting ban has also meant a precipitous drop in income. Over the years, villagers had used money from trophy hunters, mostly Americans, to install toilets and water pipes, build houses for the poorest, and give scholarships to the young and pensions to the old.

Calls to curb trophy hunting across Africa have risen since a lion in Zimbabwe, named Cecil by researchers tracking it, was killed in July by an American dentist. Several airlines have stopped transporting trophies from hunts, and lawmakers in New Jersey have introduced legislation that would further restrict their import into the United States.

But in Sankuyo and other rural communities living near the wild animals, many are calling for a return to hunting. African governments have also condemned, some with increasing anger, Western moves to ban trophy hunting.

“Before, when there was hunting, we wanted to protect those animals because we knew we earned something out of them,” said Jimmy Baitsholedi Ntema, a villager in his 60s. “Now we don’t benefit at all from the animals. The elephants and buffaloes leave after destroying our plowing fields during the day. Then, at night, the lions come into our kraals.”

In early 2014, this sparsely populated nation became one of a few African countries with abundant wildlife to put an end to trophy hunting, the practice at the core of conservation efforts in southern Africa. President Seretse Khama Ian Khama of Botswana, a staunch defender of animal rights, stated that hunting was no longer compatible with wildlife conservation and urged communities like Sankuyo to switch to photographic tourism. The decision was cheered by animal welfare groups in the West.

But Botswana is an outlier. Government officials and conservationists in most African countries staunchly support trophy hunting, including Zambia, which is going back to hunting after a short-lived suspension.

“Zambia has always hunted from time immemorial,” Jean Kapata, Zambia’s minister of tourism, said in a phone interview. “Zambia is a sovereign nation, and therefore people should respect the rules we have in our country.”

But that brought little income compared to hunting, Ms. Kapata said, while lions increasingly stalked villages for livestock. During the hunting ban, a local councillor was killed by a lion, she said.

“We had a lot of complaints from local communities,” Ms. Kapata said. “In Africa, a human being is more important than an animal. I don’t know about the Western world,” she added, echoing a complaint in affected parts of Africa that the West seemed more concerned with the welfare of a lion in Zimbabwe than of Africans themselves.

Zambia’s quick reversal points to the central role that trophy hunting has played in managing wildlife in southern Africa, where the industry’s emergence in the 1960s helped restore degraded habitats and revive certain species.

In South Africa, the biggest market, hunting occurs on private game ranches. But in the rest of the region, it takes place mostly on communal lands where villages like Sankuyo are supposed to receive a cut of the fees paid by trophy hunters.

Sankuyo, a village of around 700 people, sits just east of the Okavango Delta in northern Botswana, which has one of the richest concentrations of wildlife in Africa. In 1996, Sankuyo signed on to a community-based natural resources program that focused on hunting and was supported by the United States government.

In 2010, Sankuyo earned nearly $600,000 from the 120 animals — including 22 elephants, 55 impalas and nine buffaloes — that it was allowed to offer to trophy hunters that year, said Brian Child, an associate professor at the University of Florida, who is leading a study on the impact of the ban. Botswana’s wildlife officials, who set the annual quotas, last allowed a lion to be hunted in Sankuyo in 2006.

Among the benefits to the community, 20 households chosen by lottery received outdoor toilets, all painted in pastel colors that stand out in a village turned brown in the dry season. Standpipes were installed in courtyards, connecting 40 families to running water.

“That’s what made people appreciate conservation,” said Gokgathang Timex Moalosi, 55, Sankuyo’s chief. “We told them, ‘That lion or elephant has paid for your toilet or your standpipe.’ ”

Where trophy hunting benefits communities, locals are more motivated to protect wild animals as a source of revenue, experts say. But in most places without trophy hunting, they are simply considered a nuisance or danger, and locals are more likely to hunt them for food or to kill them to defend their homes and crops.

Dr. Child, an expert on wildlife management in Africa, said trophy hunting had failed to benefit many communities because of mismanagement and corruption. But in the countries where trophy hunting had worked well — Botswana, until the ban; Namibia; and Zimbabwe, until its economy collapsed in the past decade — it had accomplished the twin goals of generating income and protecting wild animals.

With hunting now banned, there are growing signs that more wild animals could be killed, experts say. Lions, which used to feast on the meat of elephants left behind by hunters, are increasingly entering villages looking for livestock. In the past two years here in Sankuyo, villagers have killed two lions that wandered into residential areas.

Botswana’s swelling population of elephants, accounting for a third of the total in Africa, is clashing increasingly with a growing human population. Poaching rings trafficking in ivory to East Asia have targeted elephants elsewhere on the continent. According to the International Union for Conservation of Nature’s Red List of Threatened Species, African elephants are classified as “vulnerable,” below “endangered” and “critically endangered,” and their population is increasing.

“We’re experiencing an exponential increase in conflicts between animals and human beings,” said Israel Khura Nato, the head of the Botswana Department of Wildlife’s problem animal control unit in Maun, a town two hours from here.

More poisoned vultures have been found in this area, possibly killed by poachers seeking to conceal their hunts, said Lucas Rutina, an ecologist at the University of Botswana’s Okavango Research Institute near Maun. Residents of communities that used to derive an income from trophy hunting no longer attend conservation workshops at the institute, he said.

“Now they are going back to hating animals,” Dr. Rutina said.

Galeyo Kobamelo, 37, said he had lost all 30 goats in the kraal just outside his family compound to lions and hyenas since the hunting ban. Elephants had destroyed his fields of sorghum and maize.

“Now we don’t eat meat anymore,” she said, pointing to a table with plates of cabbage, beans and maize meal.

Mr. Moalosi, Sankuyo’s chief, said he hoped to bring back some of the benefits after his village made a successful transition to photographic tourism.

But experts say that sightseeing tourists gravitate to prime areas with dense concentrations of wildlife, like the Okavango Delta’s Moremi Game Reserve west of here. They rarely venture to peripheral areas like Sankuyo, or even more remote corners, which do, however, draw hunters.

“Photographic tourism is not that viable in those areas,” said Joseph Mbaiwa, the Okavango Research Institute’s acting director.

In Sankuyo, William Moalosi is one of dozens of people that the hunting ban has left jobless. Many have left Sankuyo to seek work in Maun.

Mr. Moalosi, 40, worked for eight years as a tracker and driver, earning about $100 a month. He used some of the money to replace his old house, made of branches and the mud from a termite mound, with a modern structure. He lost his crops of maize and watermelons to marauding elephants a few months ago.

Villagers, including the chief, identified Mr. Moalosi as the man who had shot and killed a lioness last month. The animal had climbed a tree to jump down into a kraal with goats; unable to get out of the enclosure, the lioness posed a danger to the village, which gave the community the right to kill the animal.

But sitting outside his house, flanked by neighbors, Mr. Moalosi denied he was the shooter. He said he knew nothing about the circumstances of the animal’s death, a statement that drew knowing smiles from his neighbors.

“We are living in fear since lions and leopards now come into our village,” he said. “Elephants cross the village to go to the other side of the bush. The dogs bark at them. We just run into our houses and hide.”

Sankuyo was amongst the first places in Africa that I hunted. I am so pleased that the New York Times has published this article, telling the other side, our side of the story to the wider readership.