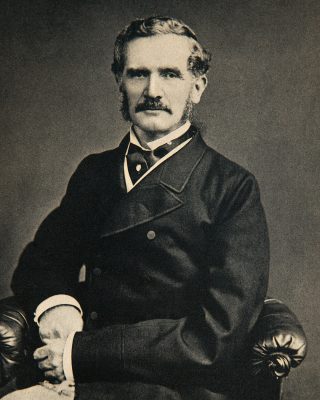 While William Westley Richards’ inventiveness did not stop with his retirement in 1840 at the age of 52, he turned over the reigns of the company to his eldest son, Westley Richards. Born in 1814, he was the only child born of William’s first wife Anne, who subsequently died leaving William to remarry about 1825.

It can be quite hard for a son to make a name for himself while working in the same industry as his father (I certainly can relate to this), especially with a father who was such a towering figure. But, Westley Richards was every bit as capable as his father, by all accounts, more so. As Leslie Taylor, the firm’s MD from 1899 to 1930 wrote in A Brief History of the Westley Richards Firm 1812 to 1912, “if we were expressing it mathematically, we should say the son was the father multiplied to many powers. The father was a man of ability, the son was of an outstanding ability.”. He goes on, “The father made the business well known to sportsmen of the British Isles, the son made it famous all over the civilized world.”.

Both of the Westley Richards history books, Taylor’s A Brief History…and Jeremy Musson’s In Pursuit of the Best Gun 1812-2012 say William Westley’s eldest son also differed from him in temperament. As Taylor put it, “Perhaps an indication of this difference may be roughly given in one statement. The father was loved by his workmen; the son, by many of them was feared – albeit admired.”. He was said to have had so much drive and determination that he was seen by some as ruthless in his pursuit of success, but at the same time, he garnered much respect from his contemporaries and remains a character of legendary status in the history of English gun making. For three decades, from almost the moment he took over the company to his own retirement in 1871, he was involved in every aspect of gun making and between 1855 and 1871 Westley Richards had 17 major patents pertaining to gun design, some even covering multiple inventions. Westley Richards lead the company through the evolution from muzzle-loading to breech-loading rifles and was the driving force behind some of most pivotal developments and designs in both sporting and military gunnery, such as the top lever system and doll’s head fastener, the falling-block, and the solid drawn cartridge. 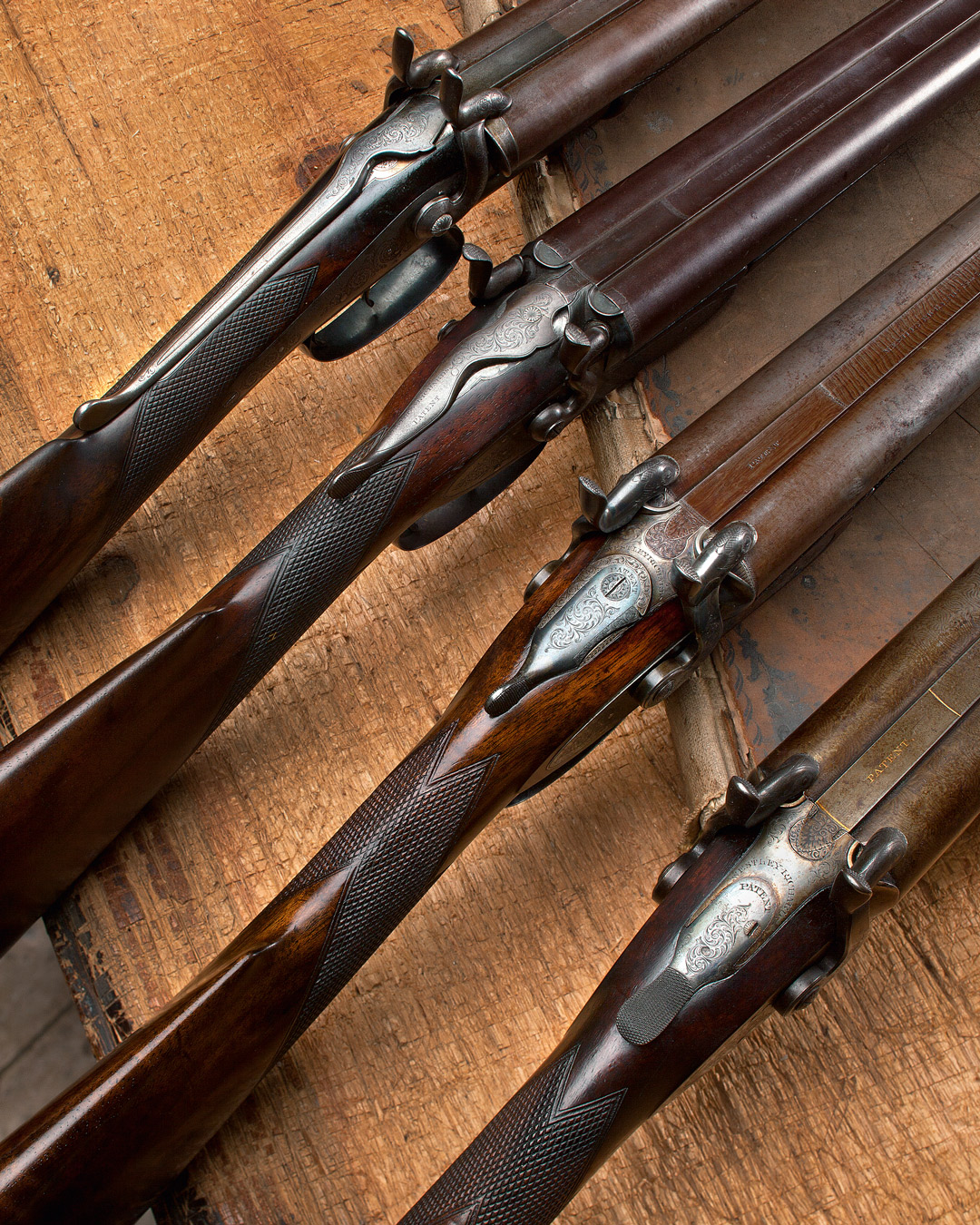 His first two patents, No. 2718 of 1855 and 1858, were some of the earliest attempts to improve on the Lefaucheux under-lever pin-fire system first shown at the Great Exhibition of 1851. This new French development allowed a shooter to load a gun from the breech with a self contained metallic cartridge known as a pin-fire. The barrels were opened by an under-lever that exposed the barrel breeches and the cartridge’s powder was ignited when a small pin, that protruded out of the cartridge’s base through the top of the barrels, was struck by the hammers. This was a major development for the hunter, making guns much more reliable in the rain compared to muzzle loading guns that were susceptible to rain getting in the barrel while being loaded and wetting the powder. Westley Richards’ further developments on this idea of loading from the breech with a self-contained cartridge lead to the pivotal designs of the top lever and the solid rib extension. Two patented inventions that are still hallmarks of Westley Richards guns and rifles today.

Introduced in 1859 by Mr. Westley Richards, and improved in 1862 with Patent 2506, this new type of bolting system was known as the “doll’s head” extension. It was a round shaped “head” that extended from the back of the barrels’ top rib and fit into a corresponding slot in the top of the action’s standing breech. The rib extension is horizontally slotted (hence the name Model “C” bolt we use in the firm to describe the extension) creating a bite that is engaged by a sliding bolt actuated by the top-lever that keeps the barrels closed. Diggory Hadoke does a much better and more detailed explanation of this design and its progress in a blog posted on The Explora in October of 2016 (The Hammer Guns of Westley Richards). As Diggory points out, the first version introduced in 1862 had top a lever that was slid rearward by the shooters right-hand thumb. This was quickly changed to a lever pushed to the right with the thumb in 1864 and is the basis of the very unique Westley Richards top lever and doll’s head still used by the firm today on both its double guns and rifles. 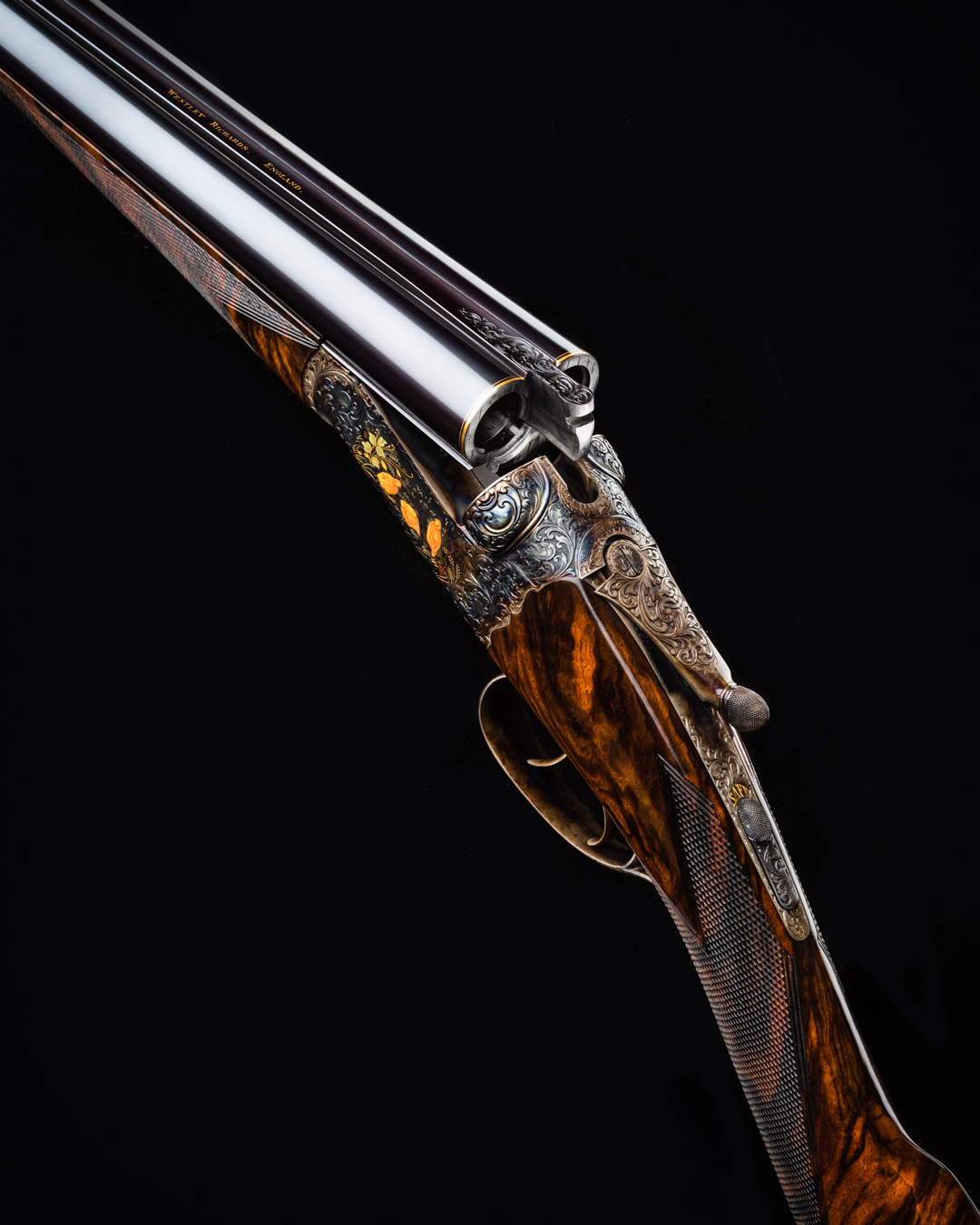 Mr. Richards pioneered many advances in military arms as well, starting with a breech-loading rifle that also incorporated another top-lever. After trials starting in the late 1850’s, the British government ordered 20,000 Westley Richards capping breech-loading carbines in 1866 to be made, under license, at Enfield. These rifles are affectionately known as “Monkey Tails” due to the shape of the lever, which was lifted to open the breech, thought to resemble a monkey’s tail. A capping breech loader was loaded from the breach end but used a percussion cap on an exposed nipple to fire. This type of loading/firing system was, effectively, the bridge between a muzzle-loader fired by a percussion cap and a breech-loader firing a self contained metallic cartridge. Along with the Snider patent that eventually won out as the British Service Rifle, Westley Richards’ “Monkey Tail” was the very first of the two breech-loading weapons to be trialed for the British infantry. First patented on March 25, 1858 (patent no. 633/1858), there were six patent changes in the “Monkey Tail”, progressing from a capped breech-loader to a hammerless breech-loader firing a centerfire metallic cartridge. This ability to adapt to the rapid advances in small arms, was not only testament to the ingenuity of Westley Richards but also kept the “Monkey Tail” in service until 1881 by the British military and made it the most successful of all the British capping breech-loaders.

In 1868, Westley Richards patented a hinged falling-block breech-loader (Patent 1931 of 1868). This should not be confused with the American designed single shot rifles where the breech-block moved vertically, like Christian Sharp’s Model 1874 or John Browning’s Model 1878 and Model 1885. These rifles are referred to as falling-block actions here in the U.S. However, Westley Richards & Co. would go on to refer to this type of action, like its Model of 1897, as a “sliding-block” rifle to differentiate between the two. The Westley Richards falling-block laid horizontally and was hinged in the rear and the front of the block dropped revealing the chamber. We Americans often refer to this as a “trap door”. When the Martini rifle was adopted by the British Army in 1868, it was found to have infringed on the Westley Richards’ patent “in the principal of its construction” and the British government was ordered to pay Westley Richards £43,000 in royalties. With the “Monkey Tail” and the patented falling-block of 1868, Westley Richards played a major role in introducing the breech-loading rifle into military service. 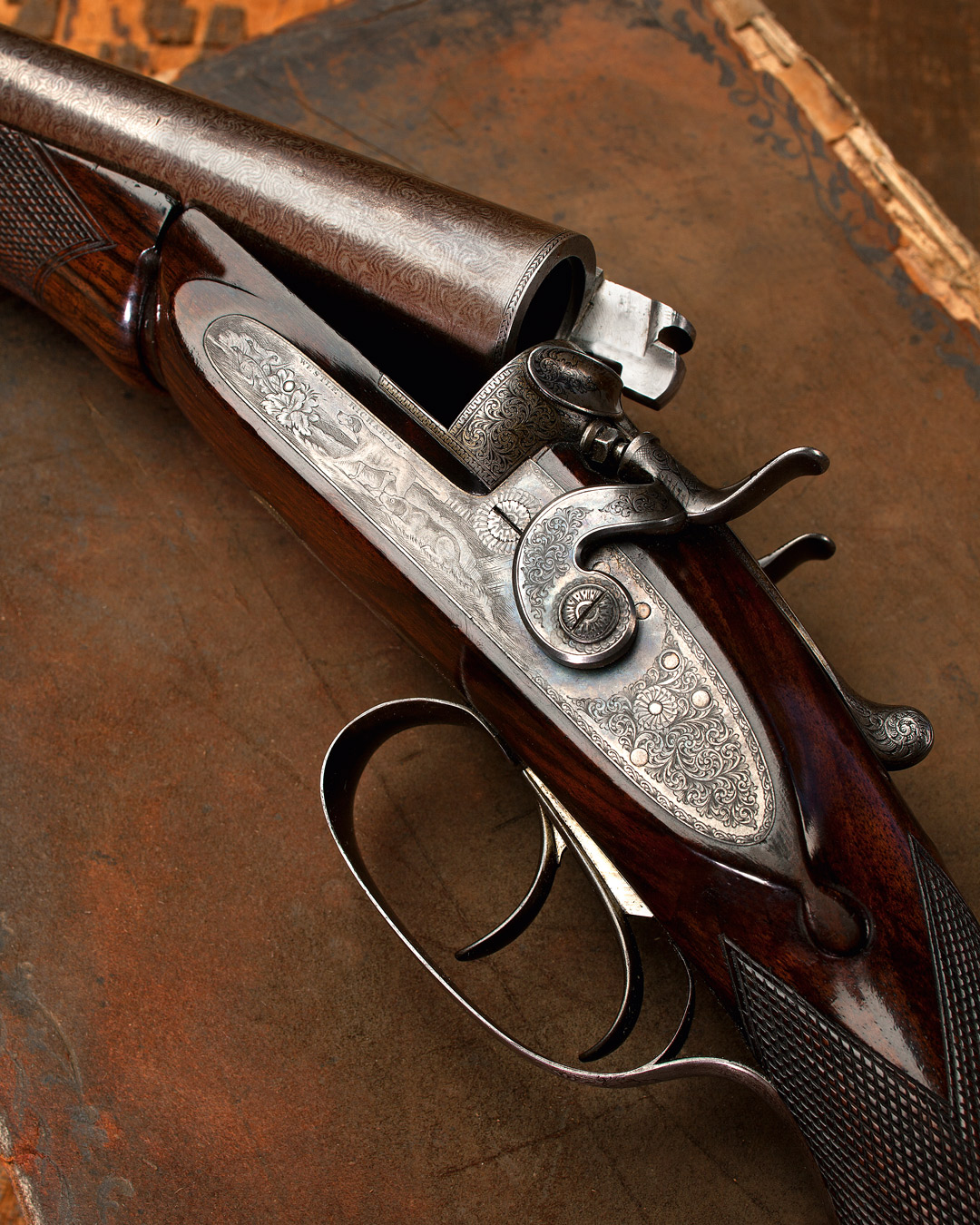 One of the obvious advantages of the breech-loader over the muzzle-loader is the rapidity in which the breech-loader can be re-loaded. However, the early breech-loading firearm designs were limited by the ammunition that was available to fire them. The early self-contained cartridges were paper or, an invention of John Rigby, made of coiled brass. While these cartridges worked in single shots they were not suitable for the use in mechanically loaded guns or the rigors of military use. In fact, in 1865 the Mont Storm capping breech-loading rifle, originally adopted by the British military, was reversed when its cartridges were deemed too fragile for military purposes.

With his eyes on the growing field of ammunition manufacturing and development, in 1870 Westley Richards bought E&A Ludlow, an ammunition making company also located in Birmingham. The company was working on the idea of a solid drawn brass case, which is basically a brass slug drawn in one continuous piece to form a case with no rough edges. Already the subject of a provisional patent filed by the Ludlow company, Westley Richards took the patent out himself in 1871 (Patent 1572/1871) to protect the drawn case design. This patent was a critical development in the self contained solid brass cartridge. While metal cartridge cases were used in the American Civil War, they were for low pressure, rim-fire cartridges like the .44 Henry (.44 Rimfire). However, this new procedure could produce a longer, stronger case capable of holding more propellant and handling much higher pressures to produce higher velocities. This new, sturdier cartridge construction would also be critical in the development of bolt-action and other mechanically-loaded repeating firearms. The development of the solid drawn brass cartridge cannot be overstated and would have major impacts on both military and sporting cartridges and still remains the basis for modern firearms ammunition today. 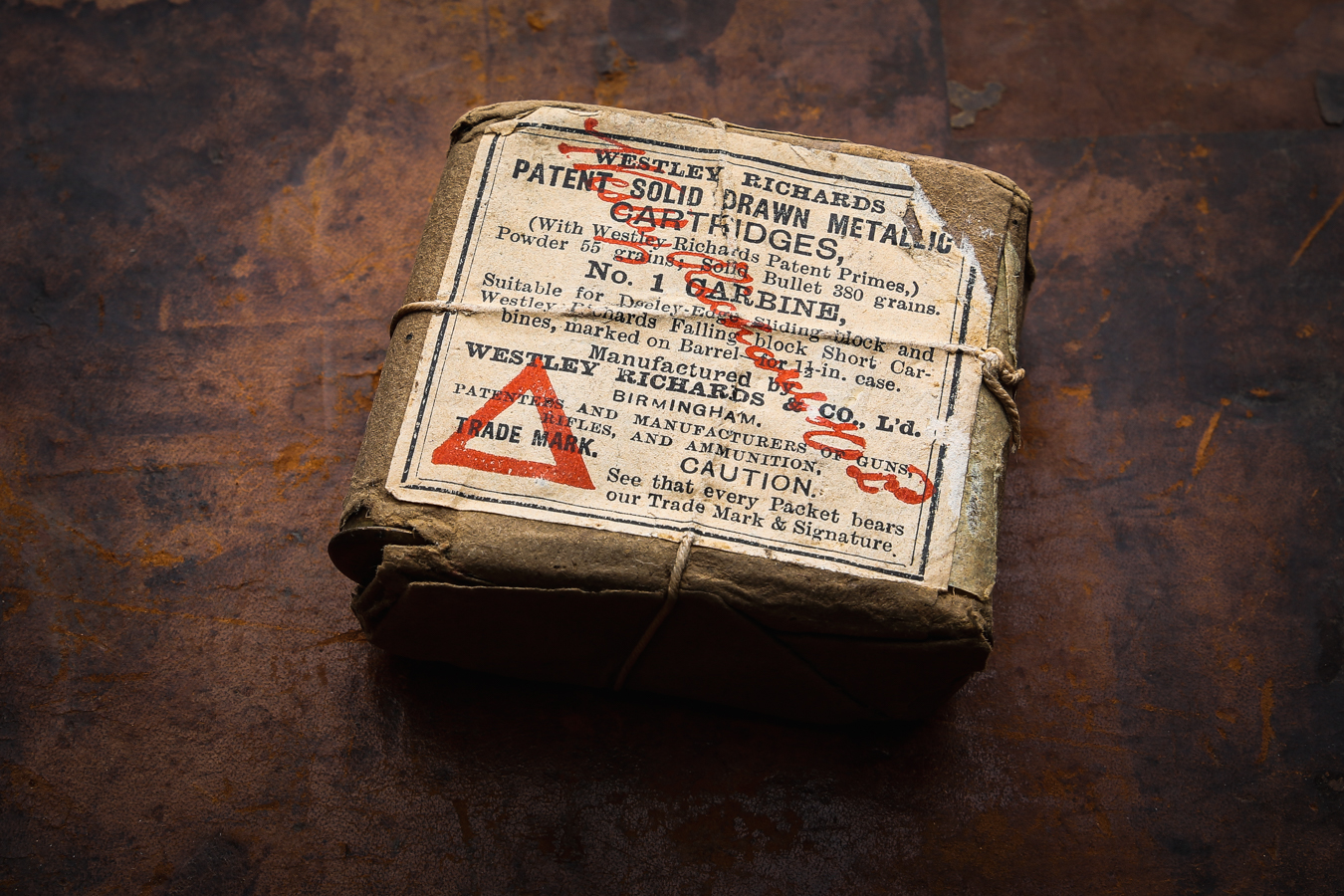 Mr. Richards would go on to take out his other patents concerning cartridges and breech-loading firearms all the way to his retirement; his last patent coming in 1872. As Taylor says, Westley Richards “left his mark upon every branch of the industry, and did more for the practical advancement of gunnery than any man of his time”. He was a giant in the industry whose impacts on the modern gun cannot be overstated. 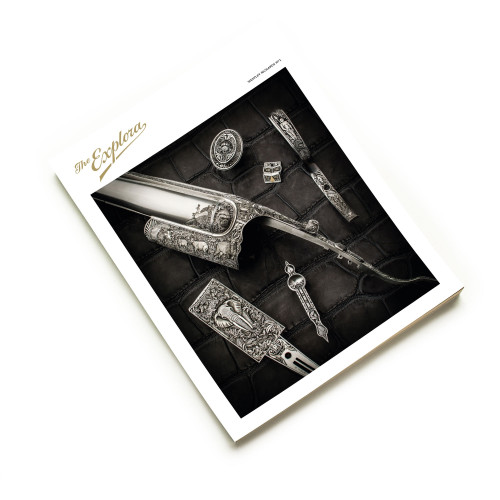 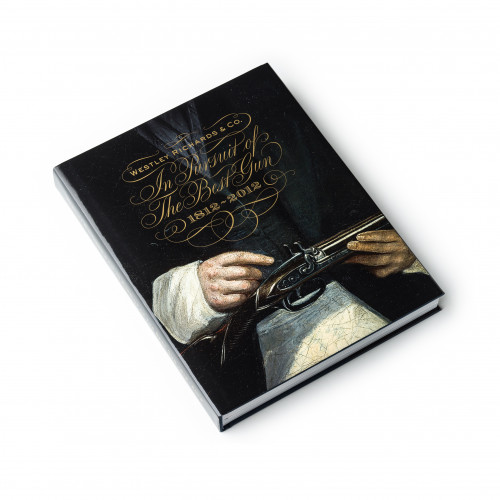 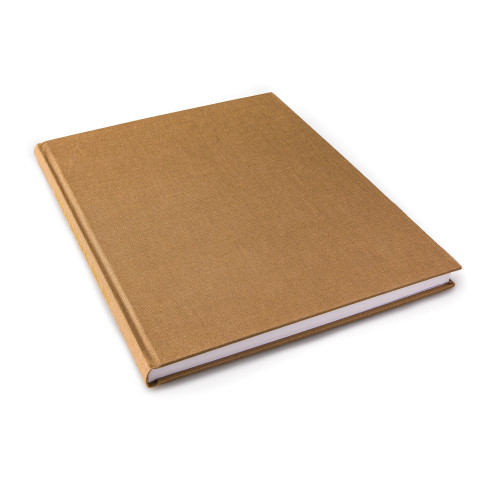