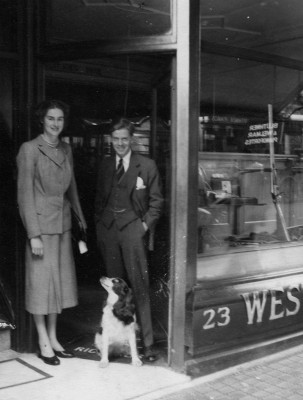 Malcolm & Rosamund Lyell outside the Conduit Street Shop shortly after joining in 1948.

I met Harry Rodgers in September 1947 when he was staying near Windermere where I had been working with a private firm of Consultant Foresters. He told me how he had recently become the Managing Director of Westley Richards. I was so ignorant, I confused the name with Winchester and said "Oh, an American gunmakers?"

I think it was me that asked Harry whether they had a vacancy and he said "as a matter of fact, we are looking for a young manager of our London shop". He said that they wanted somebody who knew about fishing, as they intended to have a retail fishing tackle business to complement the guns at the 23 Conduit Street, premises.

A few weeks later I was asked to go and stay a night with 'Uncle Ted' (Colonel E.D. Barclay), the Chairman and Proprietor, at his home in Edgbaston. That evening he opened his fly boxes, and asked me to identify three or four wet and dry flies. I got all the names right. I've always believed that is how I got the job and the offer of the managership of Westley Richards in London.

I didn't accept straight away as I was offered a job at the same time of managing the forestry on a group of estates in the Scottish borders. But staying the night with Colonel John Scott Master of the Buccleugh foxhounds near Melrose, with Colonel Henry Trotter (Master of the Berwickshire), they both strongly advised my accepting the Westley Richards offer.

So I started on January 1st 1948 - for two months' training in the Westley Richards factory, Bournbrook, and then another month in the shop in Bennetts Hill, Birmingham. I stayed in a private hotel in Edgbaston where I met Tim Powell who was to become one of my two best friends, until his death in 1994.

Mr. A. H. Thorn, whose family had owned Charle Lancaster, was the factory manager. The only thing I learnt in the factory were the final words of Mr. Thorn who said: "When you get to the shop you'll get asked lots of questions by customers, and if you don't know the answer, say so." It was one of the best bits of advice I ever had. Mr. Lemon managed the Bennetts Hill shop and during my month there I learnt a lot - and enjoyed it (for I had been bored stiff in the factory being quite disinterested in engineering and of course gunmaking is just a branch of engineering.)

So, I started at Conduit Street on April 1st 1948. Mr Alfred Redfern had been the manager for years. He was over 70 and very small. He was always impeccably dressed. He had an incredible memory and was exquisitely polite and helpful to me. We were to run in tandem for a month and thereafter he was to come in two days a week for several months. Mr. George Jones was the same age. He kept the books and answered the telephone. Both men had worked all their lives at Westley Richards. Mr. Jones had never had a day off sick ever since he started in Bond Street. He was to stay on with me almost until he died. Then there was an assistant called Stewart (I never knew his first name!), a young Scotsman who had been in the navy in the war. He was very helpful to me although he didn't know a great deal. He was just called Stewart, and the other three of us were "Mr".

The whole building was owned by Westley Richards on a 99 year Corporation Lease. It had been quite badly damaged during the war when a land mine dropped on the corner of Conduit Street and Bond Street. The shop window had boarding with two small glass windows and the ground floor (which was the shop) was terribly shabby. The patterned green linoleum hadn't been properly cleaned for years and there were a few naked lights hanging from the ceiling. There were two offices; Mr. Jones' at the back looking on to a 'well' and Mr. Redfern's room was in front of it. A bell tinkled when a customer opened the shop door (which did have glass in it) and, if Stewart wasn't in the shop, Mr. Redfern or Mr. Jones poked their heads out their doorways to see who'd come in. There was one mortice lock on the shop door, but nothing was kept locked except the safe, out of hours. The letters were all typed by Mr. Redfern or Mr. Jones on an ancient typewriter with a special red ribbon so that the copies were taken in the letter book ( Mr. Jones religiously started damping the pages at 4:30pm, then screwed down the letter press, unscrewed it, allowed them to dry, then addressed and stamped them so as to precisely at 5:30pm to post on his way home to Bourdon Buildings - off Bond Street).

For many years after I started there was all day free street parking on each side of Conduit Street - and up the middle of the street. If there wasn't a place for delivery vans to pull in, it caused quite a traffic jam especially when the I.C.I van arrived with a huge load of shotgun cartridges. The railway van arrived every morning to pick up guns. The guns and rifle being sent to the factory for cleaning or repairs were packed in old gun cases tied up with string, and were unlocked. It cost 5/- to send each package to Birmingham, so that 10/- had to be added to the charge to a customer for stirpping and cleaning his gun or pair of guns. It was quite a cost to bear when the charge for stripping and cleaning a gun was about £2.10.0.

The basement at 23 was an Aladdin's Cave when I started - filled with firearms of all kinds most of which had been in store since before the 2nd World War. The storage book had been remarkably well kept and there were only a few guns and rifle whose owners had vanished or their whereabouts not known. There were 500 size wooden Eley cartridge goes filled with old letter and documents. One marked ALWAR (Maharaja of Alwar), another PATIALA (Maharaja of Patiala) and there was one marked ROBBERY 1936 - of which more later.

There were many other things than guns in store. I remember a grey top hat and when I asked about it I was told it belonged to Sir John Pritchard Jones and that he took it away before Ascot and brought it back after the races. Then there was a whole section taken up with a folding camp bed, sleeping bag, and camp equipment - labelled LORD AMHERST OF HACKNEY.

There was a sectioned off area at the back of the basement looking on to the 'well'. This had been the shot gun cartridge loading room. The loading machines and equipment hadn't been used since 1939. There was a sand pit in one of the two cellars under the pavement where we used to fire off shot guns and rifle - more for fun than anything else.

Plans had been made in 1948 for the re-furbishment of the shop so as to accommodate and display the fishing tackle. Harris and Sheldon were contracted to do this work - and in those days they had offices on the north side of Berkeley Square. A shop design manager was deputed to liaise with me about the cabinets, and also the window display - although we put in a plate glass window very soon after I started which, whilst brightening up the shop, showed up all the shabbiness.

From memory, I think we opened the fishing department in April 1949. Mr. Lemon of Bennetts Hill decided on the level of stock, and we launched the department (it was one side of the room with guns on the other) to coincide with the launch of a display of symbols submitted by artists for the newly formed A.C.A.I (Anglers Co-operative Association).

Mr. Redfern, when he was there, and Stewart, helped sell the fishing tackle - but the main onus fell on me. Later, when Stewart left to manage copper mine in the Gold Coast, we took on a Mr. George Woodcock who left the Army and Navy Stores gun and fishing tackle department to join us. We also took on George Strachan as a packer who became a great authority on firearms and was with me until 1965 when he went to manage Rigby's. I valued his advice all down the 15 years he was with me. He had an incredible knowledge of firearms of all kinds and had started from nothing in the East End of London.

Woodcock didn't stay long and we took on a Major Gray to run the fishing tackle. At the same time Mr. A.H. Thorn came down from the factory to manage the gun and rifle department. So my staff were: Gray, Thorn, Strachan and Jones.

What became apparent to me early in my Westley Richards career, was that most profitable part of the business was the buying and selling of secondhand guns and rifles. Almost without exception the London gunmakers only bought back weapons of their own make – and when I joined Westley Richards there were 12 gunmakers in Mayfair and St. James’ plus Thomas Bland just off the Strand and Charles Hellis in the Edgware Road. I broke with this tradition by going out to buy good quality guns and rifles of any make. I bought from fringe dealers, from advertisements in The Field, (and in those days, many people wishing to sell their guns advertised them in The Field), through placing advertisements in magazines like the C.G.A. (Country Gentlemens’ Association) magazine, and I bought them from other gunmakers in London and elsewhere. 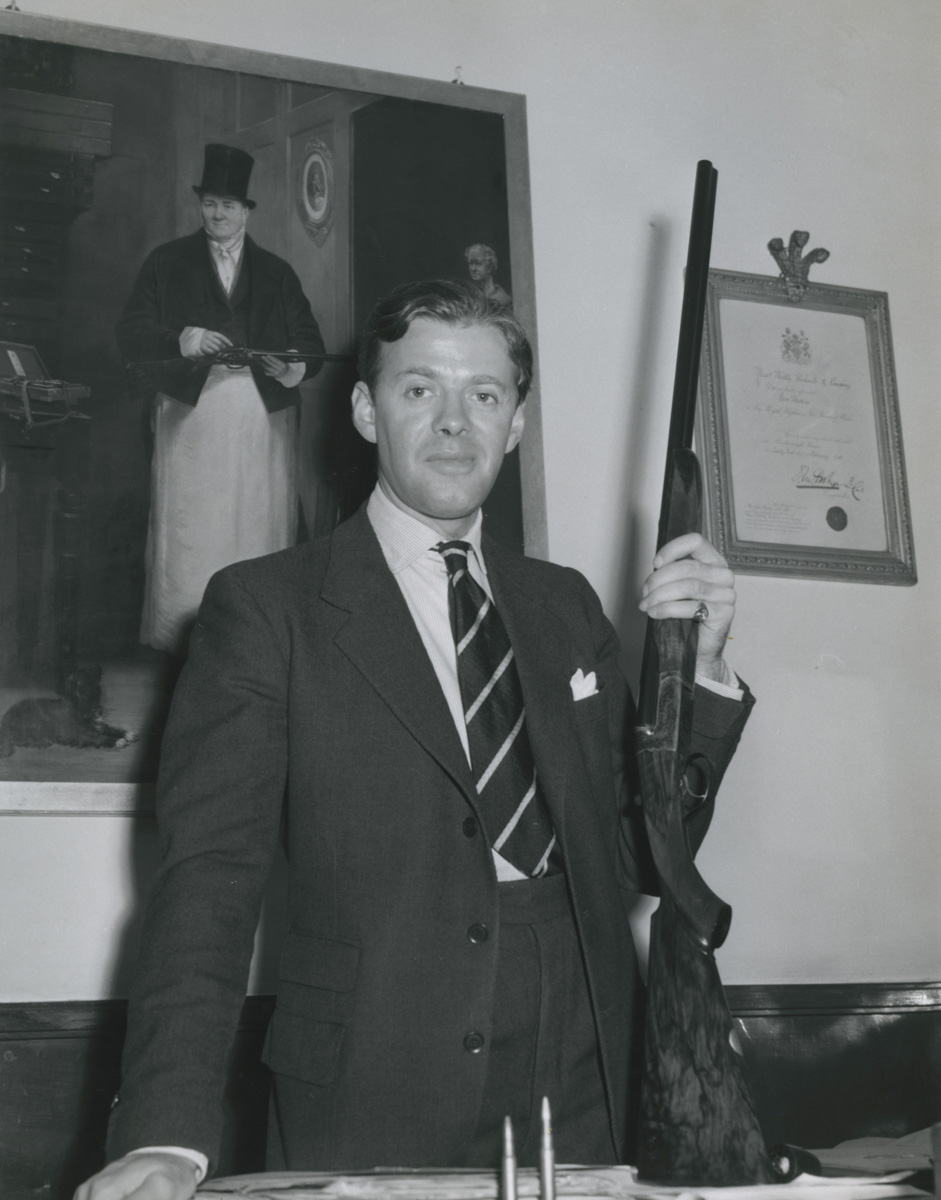 Malcolm Lyell in his office at Westley Richards with a Hand Detachable Lock Double Rifle.

These memoirs were written by Malcolm as part of the exercise when we were writing the bicentennial book. They cover his period at Westley Richards prior to his acquiring the London Agency rights to Westley Richards in 1956. I will post further extracts later on.