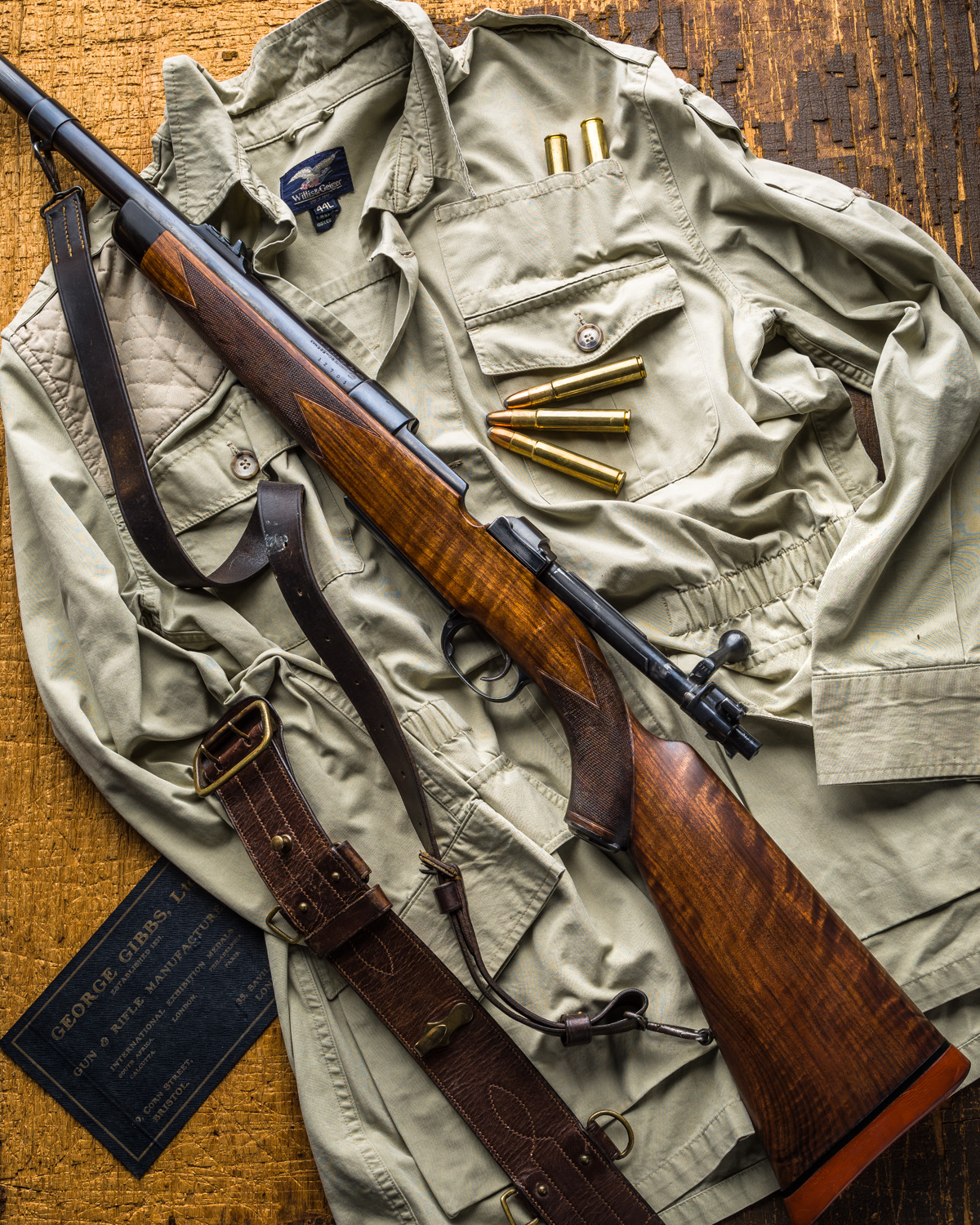 I started hunting with my late father in those halcyon days in the early 1970’s, just before Kenya banned hunting in 1977

My father’s hunting career had started in the late 1930’s, his prime hunting area the South and South Eastern slopes of Mt Kenya and the trout abundant rivers and streams that flowed down the forested mountain to the plain. From his accounts, an area then abundant with vast herds of cape buffalo, big lion and numerous rhino. His preferred heavy calibre, a .404 Jeffery with a very heavy worn tapering barrel, and a thick solid stock of dark ochre red walnut.

Growing up in Nairobi in my formative years, I would haunt certain shops: Rhodes Books, Guns and Cameras, Nairobi Sports house, and, almost opposite the New Stanley on Kenyatta Avenue, the famous Kenya Bunduki.

I have vivid recollections of one particular visit to the armoury of Kenya Bunduki and browsing through the racks of heavy calibre magazine rifles, mainly the calibre of the age, the .458 Win Mag, interspersed with a few .404 Jeffery’s. One single rifle however, caught my attention. It stood out like a short –legged Borana Bull amongst a herd of Friesian cows; a monstrous .505 Gibbs. Its twenty-two inch heavy barrel blueing worn silver, dark walnut stock bruised and scratched from countless safaris. It spoke of adventure, elephant in the humid coastal forests, and the grey ghostly spider like Commiphora woodland of Tsavo and the Tarn Desert, stretching far beyond to the emerald green riverine forest tangle of the Tana River, and north, far north of south from nowhere else, to the isolated reed beds of the vast Lorian Swamp. Rhino in the coolness of the dark, damp cedar and giant Podo forests and glades, the Abedares and the snowy peaked Mt Kenya.

Lion on the red oat grass plains of Maasailand and Cape Buffalo in the scented Leleshwa, and yellow barked Aecacia choked lugas, and gullies of the Loita Hills.

The rifle symbolised a force of nature, in its short muscular dimensions, it gave you confidence to stop anything however large, however dangerous, and under whatever circumstances.

A friend of my father farmed the lower forested fringes of the Abedare range in the 1930’s, he used the Gibbs on control work, and I recall seeing old sepia images of rhino culled as vermin. I shake my head at the thought that rhino were once so common as to be vermin. Can you imagine how many rhino there must have been?

Later, in the 1970’s, when I apprenticed to the Seargent Major on his cattle ranch in northern Kenya, and while being Askari for the livestock at night, we would sit around a fire at night, chewing the cud so to speak, while countless shooting stars criss-crossed the endless void of the equatorial night skies.

He was a man who had been around the block a few times with regards to hunting, control work and as an Honorary Game Warden in colonial times. His battery consisted of a very well looked after but battered .318 Westley Richards and a Cogswell and Harrison .375 H and H Magnum. With these he took everything from impala to elephant, but he always stated that when things got “naughty”, (he was a master of the understatement), he loved the confidence and dependency the Gibbs gave him.

The Kenya Game Department at the time had a few Gibbs in service for control, and he had used one with great satisfaction when he needed that extra edge. He had used numerous calibres, but always quoted the Gibbs as having a distinct advantage in stopping power over the others. The talk would quite often enter the early hours, and around the fire at the break of dawn, “a lot of dead soldiers”, one of the Seargant Major’s long ago expressions from the Second War, meaning a lot of empty beer bottles in this case, “White Cap”, accompanied by a throbbing head.

It was a place with the most extraordinary light. I have never, to this day, seen a sky with such an intensity of blue and some days I would spend hours on Leopard Rock Kopje, with a pair of Zeiss, looking north into the eternal, far, far distance of Kenya’s Northern frontier District.

I will not go into the Gibbs’ history and ballistics; this has been done and anyway, you always have the internet for that.

Why buy a Gibbs? Firstly, the romance, for it is part of the Golden Age of big game hunting, mostly used by professionals and Game Control officers. Secondly, its large case capacity offers lower Chamber pressure, hence you won’t have any extraction problems when that Cape Buffalo that has designs on turning you into a doormat, heads your way. Its ballistics, although almost similar to the top new .450 calibre magazine rifles, has a considerably greater bore size, thus creating a larger wound channel.

Personally, I would want my Gibbs to have a short, heavy, twenty-two inch barrel and weigh around 11lbs, a single iron sight this is a stopping rifle, not for long range, although Leaf sights look great.

Its other great appeal is that it has always been rather elusive. You hear a lot about its wonderful reputation, but never actually see one: it’s like a ghost, talked about but never seen. When you have one built, the phantom becomes a reality.

On a final note, some of you may remember that old 1970’s Janis Joplin song: “Lord won’t you buy me a Mercedes Benz”. Change some of the lyrics round, maybe not as catchy… I guess you know where I am coming from.